Joseph Kabila trusts nobody. Anyone seeking to speak with the president of the Democratic Republic of Congo must first pass through two road blocks and a security checkpoint. Beyond that lies his residence, more of a fortress, high above the Congo River in the capital Kinshasa. The employees in the reception area are nervous. This is the first major interview their boss has granted to a foreign newspaper in six years. The walls are decorated with photos of his father, Laurent-Désiré Kabila, who overthrew dictator Mobutu Sese Seko in 1997.

After his father was shot to death by a bodyguard in 2001, Joseph Kabila seized power, and he was elected president five years later. He is now 45 and has ruled the Democratic Republic of Congo for more than a third of his life. Under the constitution, Kabila is required to step down after two normal terms in office, but he wants to continue his rule. In doing so, he is plunging his country, one of the world's poorest and most unstable nations, more and more deeply into chaos. 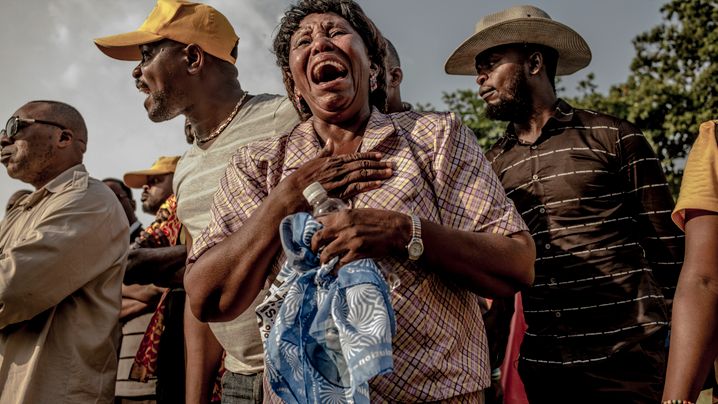 In an interview with SPIEGEL, Kabila rejected all accusations against him. He seems by no means as shy and withdrawn as he is reputed to be. When asked an uncomfortable question, the president giggles a little before responding. With his crafty eyes and unruly beard, he looks a little like the pirate Jack Sparrow from "Pirates of the Caribbean." This man wants to stay in power, regardless of the cost.

The interview takes place a day before an important holiday in Kinshasa: May 17, the national holiday to commemorate the country's liberation from Mobutu's rule. But the square in front of the Palais de la Nation, where the senior Kabila was once cheered by crowds, is virtually empty. There are no flags, no rallies and no festivals. A few cabinet ministers and lawmakers are standing, their fists raised, in front of Kabila's mausoleum to pay their respects to their hero.

'What Is There To Celebrate?'

But one man is conspicuously absent: the son of the murdered former president. The current president refuses to leave his residence, even for this historic anniversary. Perhaps he is busy waging a virtual war on his PlayStation. Computer games are apparently his hobby, although no one is exactly sure what he does.

"We are staying home today," says Cyril Liyama. "What is there to celebrate? The new dictatorship? The squalor we live in?" The stocky, 50-year-old man, a scrap dealer in the Kingabwa district, is sitting with his workers, surrounded by wrecked cars. The men are complaining: about how bad business is, about corrupt politicians and about the miserable condition of their country, which is ethnically divided, an economic basket case and in political turmoil. And there is still a war raging in eastern Congo, a war that has led to the deaths of 3 to 5 million people since the late 1990s.

Kingabwa is a slum on marshy ground, crisscrossed by toxic sewage ditches and full of garbage. Some 90 percent of residents are unemployed. "We can thank Kabila for our misery," says Liyama. "I will never vote for him again. He is a thief who couldn't care less about the people." One of his helpers shouts: "We want Mobutu back. Everything was better under Mobutu."

This is the mood in Kinshasa today, a juggernaut of 12 million people, 20 years after the country's liberation from one of the greediest kleptocrats in Africa's postcolonial history.

Probably the only people in the mood to celebrate on this day were the prisoners who escaped from Makala, the country's largest prison, located in downtown Kinshasa. A Christian militia attacked the prison in the early morning hours to free their leader. At least half of the 8,000 inmates reportedly escaped in the ensuing chaos.

It is often said that the power of Joseph Kabila's government only reaches to the outskirts of the capital. The spectacular mass prison break shows that it doesn't even control the center of the city.

Feeding Crumbs to the People

In the upscale Gombe district, preparations are underway for the Kinshasa Open, a golf tournament. The neighborhood, with its palm trees, manicured lawns and abundance of champagne, couldn't pose a greater contrast to slums like Kingabwa. In the afternoon, about 1,000 Kabila supporters gather on an athletic field in the neighborhood. A band plays hymns of praise, and there is free beer and a prize of sorts, worth the equivalent of €3 ($3.40).

The powerful feeding crumbs to the people -- a symbol of the extreme inequality in the country. While most of the roughly 82 million Congolese struggle to survive, the elites are looting the country's riches. Congo is one of the world's richest sources of raw materials, including gold, diamonds, copper, cobalt, oil and precious wood.

The Bloomberg news agency estimates that Kabila's family clan holds shares in at least 70 companies and more than 120 licenses to exploit mineral resources. Billions of dollars have been funneled into secret foreign accounts and tax havens. This is one of the reasons why the president doesn't want to step down, say his opponents: He is afraid of losing his vast fortune, reportedly worth $15 billion. And he is also afraid that he could suffer the same fate as the longstanding Liberian President Charles Taylor, who robbed his country and was sentenced to 50 years in prison for war crimes by a court in The Hague.

"Kabila wants to show that he can do what our neighbors have done," says Jean-Claude Kibala. He's referring to Rwanda, Burundi and Uganda, where the constitutions were also amended or violated so that their presidents could remain in office.

Kibala was the country's minister of public services. He resigned in September 2015, when it was revealed that Kabila wants to postpone the elections. "I said to him: You are destroying what you built," says the former minister, speaking in accent-free German. He was trained as an officer in the German military and is seen as one of the few incorruptible politicians in Congo. "But the boss didn't want to hear the warning. He treated us like unruly children."

Kabila has now had compliant constitutional judges certify him as interim president. He is trying to buy time, or engage in what the Congolese call "glissement" -- sliding or gliding. Kabila is delaying elections in the hope of amending the constitution, or of determining a successor who will protect him and his family empire.

At the same time, he is buying the support of his adversaries -- or is intimidating and imprisoning them. He has political parties established to divide the opposition. The majority of the 500 members of parliament are loyal to Kabila.

After the president cancelled the elections in the fall of 2016, there were mass protests throughout the country, which were violently suppressed by the police, army and presidential guard. Dozens died in Kinshasa alone. Last December, the Congolese Conference of Catholic Bishops brokered a compromise between the government and the opposition, under which a transitional government led by the opposition is to prepare for elections by the end of this year, with Kabila remaining in office until that time.

In early April, Kabila managed to install a new prime minister for this transitional government, someone who was acceptable to him, a laughingstock named Bruno Tshibala. Although he was a member of the main opposition party, UPDS, he defected to the same government that had had him imprisoned at least a dozen times. Politics à la congolaise.

"Tshibala needs money. He is a traitor," says Félix Tshisekedi, head of the UDPS. "By appointing Tshibala, Kabila has clearly violated the agreement for the transition period."

Outside the entrance to Tshisekedi's office is a shrine to his father Étienne, who died in Brussels on Feb. 1. The senior Tshisekedi had been the administration's most influential adversary. The regime even fears his mortal remains, says the son, which is why the authorities are not allowing the body to be returned from Belgium. "Two million people will take to the streets when his coffin arrives here." Tshisekedi would like to become president himself, though many say that he would be unable to fill his father's shoes.

But there's another challenger who could become much more dangerous for Kabila if elections are ever held: Moïse Katumbi, a former ally of the president and, in his day, a successful and popular governor of Katanga Province, which has since been divided up. He received threats after announcing his intention to run for president and fled to Europe. He was then sentenced in absentia to three years in prison for fraud. An independent commission found that the evidence had been fabricated to eliminate Kabila's rival.

"But I will return and run in the election," Katumbi says on the phone from Brussels. Kabila is a dictator, he adds, but no one is afraid of his weapons. "The citizens are still the biggest power in Congo."