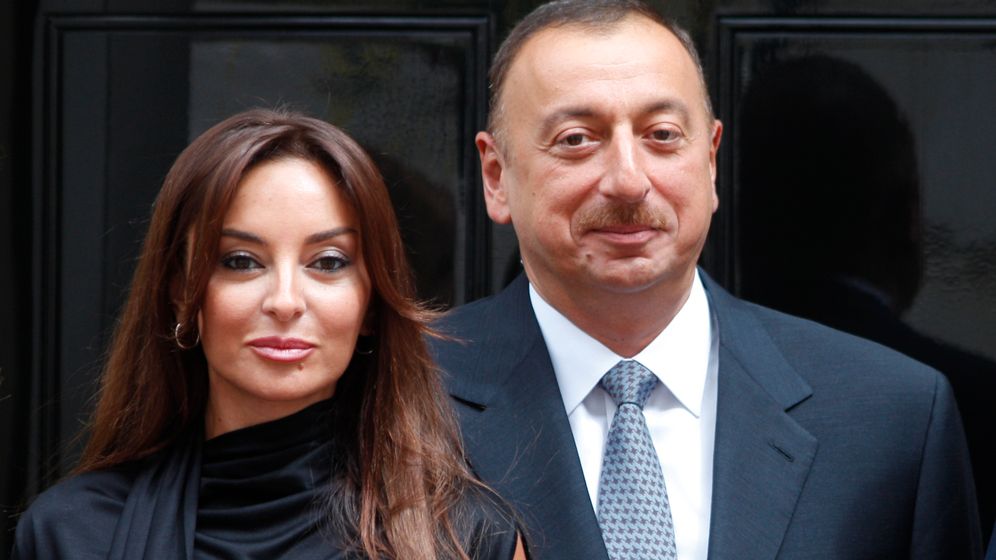 So what is Bettina Wulff, the wife of German President Christian Wulff, doing at a party hosted by an authoritarian regime in the Caucasus? She tours an exhibition and delivers a welcome address. Pictures from the event show her smiling next to Mehridan Aliyeva, the wife of Azerbaijani President Ilham Aliyev.

In the fall, Aliyev hosted a celebration at Berlin's German Historical Museum to fete the 20th anniversary of Azerbaijan's independence. The former Soviet republic has a reputation for not being a stickler for human rights. "I wouldn't have gone (to the event)," says Markus Löning, the German government's human rights commissioner.

The Office of the President has responded to such criticism by saying that Mrs. Wulff agreed to attend the party because it was a cultural event. After all, there were carpets on display. But the event was about something more than just carpets. The regime in Baku, Azerbaijan's capital, is intent on improving its image in the West -- and it is spending a lot of money to do so. Likewise, there are German politicians willing to help it orchestrate these efforts.

People around the globe will turn their eyes to the country on May 26 when Azerbaijan hosts the Eurovision Song Contest, the world's largest non-sporting television event, which brings singers from around Europe and farther afield together to compete for the title. Azerbaijan could definitely use an image makeover before they arrive.

Amnesty International accuses the regime of muting its critics. In its ranking of press freedom in 178 countries, the Paris-based organization Reporters Without Borders puts the country in 152nd place. In an internal report, Germany's Foreign Ministry says the human rights situation in the country remains problematic.

The image campaign is being orchestrated by PR professionals in Germany and other European countries and financed by the government in Baku as well as influential oligarchs. For its success, the campaign is banking on money and the tactlessness of German politicians. "Azerbaijan's behavior here borders on brazenness," argues Marina Schuster, a member of Germany's parliament, the Bundestag, with the pro-business Free Democratic Party (FDP). "This kind of lobbying work goes far beyond what is acceptable."

Hans-Erich Bilges is sitting in his office with his legs crossed and his tie loosened. He can quickly transition between being kindhearted in a grandfatherly way and unpleasantly caustic. When he speaks about President Aliyev, Bilges is kind. But when the conversation turns to Aliyev's critics, he is harsh.

Bilges is a key figure in Azerbaijan's efforts to promote itself in Germany. Previously, he served as a high-ranking member of the editorial team at Germany's mass-circulation daily Bild. These days, however, he heads the Berlin-based Consultum Communications public relations agency. In this capacity, Bilges has also advised Belarus and Kazakhstan, which are ranked even lower than Azerbaijan when it comes to press freedom. That impressed the Azerbaijanis. Bilges says his job is to help Azerbaijan in the process of pursuing a more Western course. Part of this process is hosting events like the one in Berlin, which Bilges says he played a minor role in by helping make sure things "went as they should."

Still, it was probably more than that. Among the luminaries attending the Berlin gala were former Foreign Minister Hans-Dietrich Genscher (1982-1992) and former Economics Minister Michael Glos (2005-2009). Although that caliber of guest was unusual for this kind of event, things start to make more sense when one peers behind the scenes. Genscher is the honorary chairman of the advisory board of Consultum Communications, and Glos holds a seat on its board. In this way, Bilges cooperates with politicians who go to celebrations hosted by his clients. While there is nothing illegal about this, it does leave an unpleasant aftertaste. Indeed, it leads one to wonder why well-respected politicians would be needlessly helping an authoritarian regime gain more respectability.

For his part, Bilges finds the situation in Azerbaijan better than the critics paint it. Michael-Andreas Butz, the person responsible for everyday business related to Azerbaijan at Consultum Communications, explains why. "Strictly speaking, there are also political prisoners in Germany," says Butz, who also served as the spokesman for the Berlin Senate, the official name for the capital city's government, for many years. "Of course, in a certain way, Horst Mahler is also a political prisoner," he adds, referring to the former far-left terrorist turned far-right activist who is serving a prison sentence after being convicted on charges of denying the Holocaust and incitement.

Bilges' activities are only part of Azerbaijan's lobbying efforts. The country likes to invite foreigners to Baku for conferences that have a "pseudo-academic character," according to Viola von Cramon-Taubadel, a member of the Bundestag with the opposition Green Party. As a critic of the regime, Cramon has stopped receiving its invitations.

On the other hand, a group of German politicians traveled to Baku in September to attend an independence celebration. The group included Glos, Karl-Georg Wellmann, a parliamentarian with Chancellor Angela Merkel's center-right Christian Democratic Union (CDU), and Stefan Liebich, a parliamentarian with the left-wing Left Party. The trip included business-class plane seats, lodging in a luxury hotel, a gala dinner and a speech delivered by President Aliyev. Liebich and Glos have acknowledged that the trip was paid for by the Azerbaijani side. But at least Liebich touched bases with Löning, the human rights commissioner, before the trip, asking which discussions it would be useful to have outside the official program.

Wellmann, on the other hand, has declined to respond to questions about the trip -- or, better yet, trips. In 2010, he had already traveled to Baku to attend a conference entitled "Media in Democratic Society."

United States diplomatic cables obtained by the whistleblower platform Wikileaks attest to the mafia-like tendencies of Aliyev's regime. In October, British historian Simon Sebag Montefiore wrote in a contribution to the New York Times on the "lives of tyrants" that Aliyev had achieved the "dictator's dream" by creating a new hereditary monarchy. Allowing this man's followers to pay for airplane trips and expensive hotels is a matter of sensitivity and tact.

Azerbaijan also has friends in the Parliamentary Assembly of the Council of Europe, the Strasbourg-based international body tasked with promoting such things as human rights, democratic development and the rule of law. Among them was Eduard Lintner, a former member of the Bundestag with the Christian Social Union (CSU), the CDU's Bavarian sister party. Between 2002 and 2005, Lintner was chairman of the Parliamentary Assembly's Committee on Legal Affairs and Human Rights and a member of the so-called Committee on Honoring Obligations and Commitments by Member States. As such, he was responsible for the Council of Europe's reports on the human rights situation in Azerbaijan.

Leaders in Baku were pleased with how Lintner took care of his task. Shortly before leaving the Council, Lintner became the executive director of a Berlin-based Society for the Promotion of German-Azerbaijani Relations, which is essentially a lobbying group funded by Azerbaijan. Lintner says that one of his reasons for stepping down from the human rights committee was the fact that there was a group within the Council of Europe that wanted to rigorously denounce alleged human rights violations. Unlike them, he says he would have preferred to "usher (Azerbaijan) along in a supportive way." It was a stance that has apparently paid off.

Of course, not everyone is so malleable. This year, Christoph Strässer, a Bundestag member with the center-left Social Democratic Party (SPD), is supposed to write a report for the Council of Europe on the situation faced by political prisoners in Azerbaijan. For months, the regime in Baku refused to grant him a visa. In early November, the Bundestag's Committee on Human Rights and Humanitarian Aid responded by drafting a resolution demanding that the government in Baku grant Strässer free access to its detention centers. Interestingly enough, Strässer claims that Azerbaijan's ambassador to Germany already had a draft copy of the resolution before it was even decided upon. Indeed, whether it was for money or out of love for Azerbaijan, it would appear that someone from inside parliament leaked the document to the Azerbaijanis.

In response, the Azerbaijani ambassador wrote letters to all of the heads of the parliamentary groups in hopes of blocking the resolution. But it didn't do any good.

One of the people who helped the ambassador compose the letter was none other than Bilges. Although he was angered by the resolution, he hasn't allowed it to discourage him. On his desk, he has the letter that Jürgen Trittin, the parliamentary floor leader of the Green Party, had written in a response to the ambassador's letter. "Trittin will get a sharp response back," Bilges says. If one wants to improve the image of an authoritarian nation, one can't be squeamish.