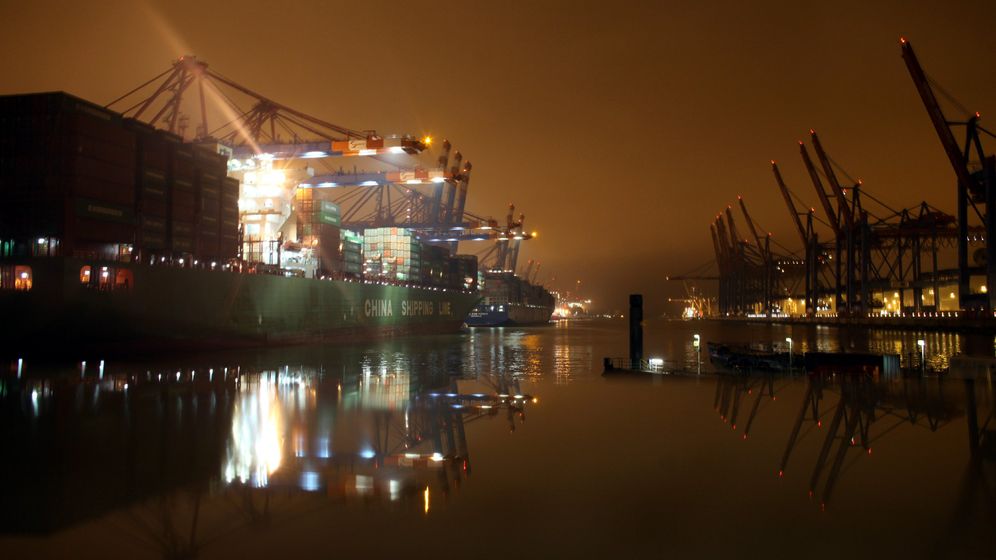 There is an ironclad rule in Berlin politics: The greater the concern the more nervous the rhetoric.

Given such a yardstick, members of the German government must be suffering from anxiety attacks whenever the talk turns to global free trade these days. A case in point is Finance Minister Wolfgang Schäuble, a member of the center-right Christian Democrats (CDU), who refers to the reports on currency and trade wars, foreign exchange battles and devaluation contests as "sheet lightning."

Economics Minister Rainer Brüderle, of the pro-business Free Democrats (FDP), believes he has spotted the "specter of protectionism" dressed in an insidious disguise. "There are many ways to dress up protectionism," the politician warns. Brüderle recently admitted that, in light of the imminent risk, he feels like a "missionary" for free trade and globalization.

Berlin's political community is not distressed without reason. When the financial crisis erupted three years ago, the international community initially managed to prevent an imminent global economic crash by taking joint action to rescue banks and stimulate the economy. These measures were particularly beneficial for the German economy, which will experience the strongest growth this year since 1991.

But new, dramatic distortions are now looming in the post-crisis global economy. The current global economic order threatens to fall into disarray in several different areas:

Each individual development is cause for concern on its own. But together, they constitute a serious threat to the world economy. The German business model, which builds on the success of the country's export economy, is particularly at risk.

The movement toward liberalization shaped world trade for decades. Tariffs were reduced or abolished and trade barriers were eliminated. This released energy to stimulate growth and increased prosperity worldwide. For years, global trade grew at a faster pace than economic output. It was a clear indicator of the productive effects of the division of labor and the freedom of trade. As Scottish economist Adam Smith pointed out, everyone benefits when each player in the economic system produces what they are best at producing.

Much at Stake for Germany

But now, for the first time since the end of World War II, free trade could face setbacks on a broad front, unless the leaders of the major industrialized and emerging economies can agree on joint solutions to the current problems. The G-20 will meet this week in the South Korean capital Seoul to discuss the condition of the global economy once again. Currency wars and trade imbalances are at the top of the agenda.

Much is at stake for Germany, which is currently experiencing an unexpected employment and growth spurt, due in large part to the substantial competitiveness of its companies in global markets. The German economy is expected to grow by about 3.5 percent this year, perhaps even more.

This success has sparked resentment, particularly among countries that are having a hard time pulling themselves out of the crisis, most of all the United States. The government in Washington sees the success of others as the source of its own troubles. Treasury Secretary Timothy Geithner has long complained that China's and Germany's trade surpluses indicate that these countries haven't developed enough domestic demand to help weaker countries.

A few months ago, French Finance Minister Christine Lagarde used similar arguments to target Germany. Two weeks ago, Geithner followed up on his complaints with action when he proposed a mechanism that would require countries with trade surpluses to modify their fiscal and economic policies in ways that would stimulate domestic demand. This would enable these countries to import more, said Geithner. In other words, countries with a trade surplus should voluntarily give up their competitive advantages for the benefit of the United States.

A Bombardment of Communiqués

Geithner failed to get his way at a meeting of G-20 finance ministers two weeks ago. Now, President Obama has decided to take matters into his own hands, and he is hell-bent on advancing the issue at this week's summit.

The White House and the US Treasury Department have bombarded their partner countries with memos and draft communiqués explaining their ideas. Washington wants to see countries with a trade surplus or deficit exceeding 4 percent of GDP subjected to heightened observation or required to change their policies. The Americans are doggedly sticking to this quantitative benchmark.

The German government is not prepared to bow to the will of the battered hegemon. "The proposal is not acceptable for Germany under any circumstances," German Finance Minister Schäuble said in a SPIEGEL interview. His ministry's policy is clear: "We reject non-cooperative solutions."

The German government's negotiators, Jens Weidmann, the chancellor's economic advisor, and Jörg Asmussen, a state secretary in the Finance Ministry, are feverishly trying to organize a concerted defense against the American proposal. In the dozens of position papers and memos that have been traveling back and forth among the capitals of the participating countries, Weidmann and Asmussen make no secret of their rejection of and disagreement with the Geithner proposal.

Germany Seeks to Undermine the US

They point out that there are various reasons why countries produce surpluses. A country like Saudi Arabia will generate a surplus for a long time, because it exports oil. China manipulates its currency to create an advantage for its products.

But Germany's export surplus, Weidmann and Asmussen argue, is not the result of the country having ample natural resources or a deliberate devaluation of its currency. Instead, it is based on the diligence and ingenuity of its companies and workers. For this reason, they say, Germany should not be pilloried.

In any case, Germany regards the target range of between plus four and minus four percent of GDP to be completely arbitrary. There is, they say, absolutely no research that would support setting the threshold at these specific levels.

There is, however, a clear political reason: The United States does not run the risk of falling afoul of the limits Geithner proposes. Its trade deficit of 3.2 percent is within the permissible framework, as is that of Great Britain (2.2 percent), which supports the US proposal. The French are supporting neither the US-British offensive nor the German defensive position.

The German government plans to constructively undermine the American proposal. Under Berlin's concept, the new monitoring regime would not only consider trade imbalances, but would also look at a country's natural resources, international competitiveness and demographic developments. Under no circumstances does Germany want to allow a target corridor with specific threshold numbers.

It remains to be seen whether Germany will prevail or whether the US will ultimately get its way.

In any case, the tone of the debate among governments is becoming increasingly raw. German government experts fear that the Americans are interested in more than just forcing other countries to make adjustments. If a country like China is constantly under suspicion, it becomes much easier to justify retaliatory measures against its flow of goods. Instead of eliminating global imbalances, the new mechanism could even accelerate the tendency toward new trade barriers.

The flood of protectionist measures since the height of the financial crisis two years ago has already become surprisingly large. Particularly given the fact that, during their first conference -- in Washington in the autumn of 2008 -- G-20 members pledged to dispense with self-serving, protectionist policies.

But in a recent report, the European Commission enumerated 332 individual protectionist measures. In one case, the United States raised import barriers on steel and certain types of sleeping bags. In another, Canada granted discounts on domestic milk for the production of ice cream.

Almost 2 percent of EU trade was affected by protectionist policies between October 2008 and October 2009 (more recent data doesn't exist). "These are the wrong signals altogether," says senior Economics Ministry official Bernd Pfaffenbach, who heads the ministry's division of foreign economic policy. He notes with concern that many protectionist measures remain in force, even though the acute crisis is over. "This will be a burden on world trade," Pfaffenbach fears.

The Weapons of War

Economists have long agreed that protectionist measures reduce prosperity -- for all parties involved. Production declines in countries whose goods are locked out. This means that they can import less, which in turn affects the protectionist country. Its economy and consumers are also forced to pay inflated prices for domestically produced goods, which leads to a loss of affluence.

For Thomas Straubhaar, director of the Hamburg Institute of International Economics (HWWI), protective tariffs and other trade barriers are the handguns in the global fight for market share. Their effects are selective, but they can also be deadly when they hit their target.

Countries also wage economic war with weapons of a bigger caliber. "Those are exchange rate manipulations and the expansion of the money supply," says Straubhaar.

The Americans' determined approach was in full evidence last Wednesday, when Federal Reserve Chairman Ben Bernanke announced that the Fed would purchase an additional $600 billion (€432 billion) in US Treasury bonds.

The unrestrained firing up of the money printing machines will inevitably weaken the external value of the dollar and, in turn, force the Chinese to defend their currency. Bernanke's announcement was met with harsh reactions in Beijing, where an advisor to the Chinese central bank rebuked the United States for what he called the "unbridled printing of dollars" and said that China must set up a "fiscal firewall."

The possibility of an economic arms race looms. "The bad thing about it is that everyone can offer good reasons to defend his actions," says Dennis Snower, president of the Kiel Institute for the World Economy in northern Germany. According to Snower, the Chinese are manipulating their currency, the yuan, downward to prevent their export sector from collapsing. Meanwhile, the Americans are tapping the Fed for hundreds of billions in the hope that their economy will pick up momentum. Both approaches accelerate the decline in the value of both currencies.

The clash of the titans will provoke substantial distortions in the world economy. If the European Central Bank, in keeping with its mandate to limit inflation in the common currency zone, does not relax its monetary policy any further, the value of the euro will likely rise considerably against the dollar. The consequences are foreseeable: Goods from the euro zone will become more expensive. This doesn't bode well for Germany. "As the world's second-largest exporter, Germany would be particularly affected by such turbulence," says Snower.

Economics Ministry official Pfaffenbach looks to the future with a touch of gloom. He sees parallels to the Great Depression. Protectionism and a scramble to devalue currency are the last things the world needs at the moment, he says. "It bears a fatal resemblance to the 1930s."