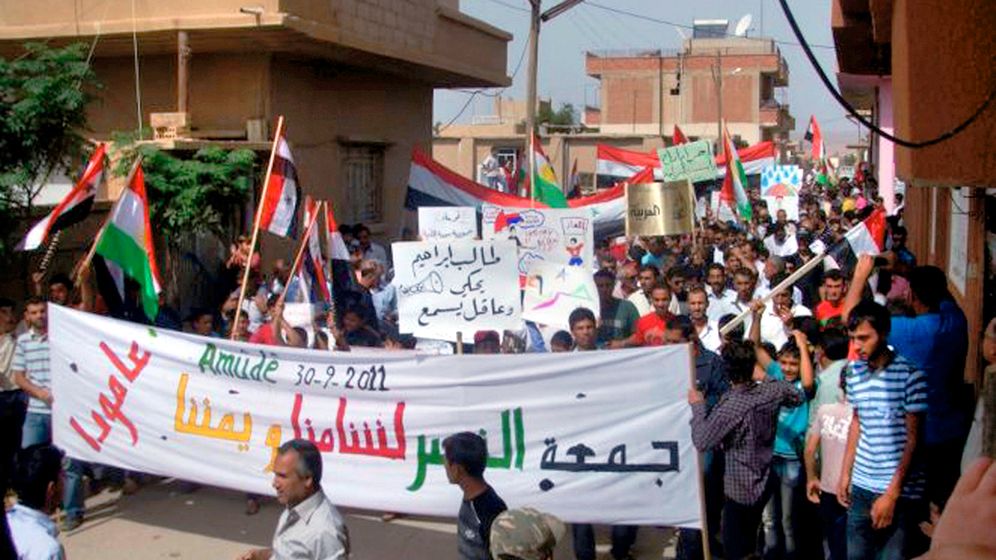 A skinny young man with blue-dyed hair and boxy, horn-rimmed glasses sits in front of a laptop at a tiny desk in a shared apartment in Berlin's bohemian Friedrichshain district. This is what the auxiliary forces of the Arab Spring look like, of the revolutions in Tunisia, Egypt and elsewhere.

Stephan Urbach's eyes are half closed. The 31-year-old complains about not getting enough sleep again as he takes a sip of Club Mate, a sweet and highly caffeinated soft drink that has become the beverage of choice for many activists working the night shift.

Until late last year, Urbach had a full-time position at AOL, the Internet service provider, where his job was to provide technical support to advertising customers around the globe.

In a way, he is still providing such support -- though all of his "customers" now have names like Muhammad or Ahmad. And, unlike with his previous job, he gets a jolt of excitement every time their messages appear on his screen. He's also relieved because every message he receives shows they can still go online and are not in prison or being tortured. Such has been the fate of many bloggers and digital dissidents -- even in supposedly post-revolutionary countries, such as Egypt.

The Birth of an Online Movement

Urbach is wearing a black T-shirt with lightening bolts printed across it. This is the symbol of Telecomix, a loose network of international computer freaks that first emerged in Sweden. Their main goal is to make the Internet free and uncensored. Roughly three years back, the activists' first project -- and the one that determined their group's name -- was to influence Sweden's implementation of European Union telecommunications legislation.

During the 2009 protest movement in Iran and the Jasmine Revolution in Tunisia, Telecomix still mainly functioned as a group that gathered and disseminated information. The net activists posted links to the pages of dissidents and critical bloggers who dared to challenge the authoritarian regime in their respective country as well as the conformist state media by acting as citizen journalists.

But on Jan. 27 -- the day the regime of then-President Hosni Mubarak took Egypt offline - Telecomix decided it should do more than simply act as a vehicle for enhancing the reach of critical voices.

Geeks to the Rescue

Egypt's Internet blackout lasted several days. This helpless and desperate act showed that Egypt's authoritarian rulers realized the threat posed by rebellious netizens and their medium. Likewise, it demonstrated that the regime was afraid of the way that social media could aid in broadcasting calls for mobilization as well as of the critical comments of many bloggers.

Mubarak's technical counterattack shocked online activists and hackers around the world. For many, it was like a wake-up call for them to offer concrete assistance to those denied online freedoms. Since then, a very active movement has sprung up, and Telecomix is only one of a number of such collectives.

Activists at the anonymizing service Tor, for example, are holding workshops for Arab bloggers and, for years, they have been advising people on how to surf securely and send photos and videos abroad undetected. The hacker collective Anonymous also aims to focus more of its attacks on authoritarian countries in which protest movements are forming.

Telecomix has transformed what began as a mere act of solidarity with Egyptians blocked from online activities into an elaborate strategy. Since last week, its efforts on behalf of average Syrians have attracted particularly widespread international attention. On Oct. 5, the collective published a huge cache of data showing not only how the regime of President Bashar Assad has monitored the online activities of Syrian citizens, but also suggesting that -- just like many of its authoritarian neighbors -- the Syrian government is using Western-made technology to do so.

Urbach says the situation was relatively easy when they were dealing with Egypt. True to the Telecomix motto "We Rebuild," Egyptian activists were simply rerouted so that they could go online again. To do so, Telecomix activists first organized what are known as "modem pools" in countries with particularly large numbers of sympathizers, including Sweden, France, the Netherlands and Germany.

They then used search engines to track down the cached fax numbers of Egyptian libraries, hotels and IT companies. To these, they faxed telephone numbers that Egyptians could use to circumvent their Internet service providers (ISPs) and still go online.

Why Syria Is Tougher

One of these numbers was Urbach's. He is unusual among the digital white knights in that he uses his real name. Many of his fellow hackers prefer to go by a pseudonym when communicating online.

Such caution is understandable now that Syrian authorities have started clamping down on dissent. According to the latest United Nations figures, the Assad regime has killed roughly 2,900 Syrians since the protest movement got underway in mid-March.

Researchers at Amnesty International suggest that at least 88 detained activists have also been killed after apparently being tortured. However, the group admits that its was forced to make its estimates from afar and on the basis of photos and videos smuggled out of the country.

Urbach's fellow Telecomix activists are spread across the globe, and most of them have never met in person. One, a man who goes by the pseudonym "Okhin," lives in Paris. By day, the 30-year-old works as the systems administrator of an Internet company. Over the last few months, most of his evenings and nights have been spent in a squat not far from the Place de la République.

He and his friends have secured two floors of a former office building for themselves and transformed the space into a meeting place for hackers. A gutted computer stands in a corner. Some jokester has hung old computer mice in a bird cage. Hackers lounge around on threadbare sofas.

The previous tenant's high-speed data lines still work, Okhin says with a grin. These networks are also being used to provide electronic aid to Syrians. But, as Okhin explains, supporting them is far more complicated than it was with Egyptians or Tunisians.

The main reasons for this are technical: Internet use is less widespread in Syria than it is in other "Arabellion" countries; there is no widespread 3G cell phone network; and there are fewer smartphones that can be used to inconspicuously document instances of official abuse.

Communication is also a problem because many of the Syrian protesters only speak Arabic.

Last but not least, the Assad regime is rather well equipped. As Okhin and other hackers have noted during their nightly online sorties, the Syrian government is blocking both Internet access and individual pages. Moreover, it is not doing so in the somewhat random fashion it used to. Instead, it is keeping tabs on them with ultramodern filtering technology developed by Western companies.

Giving a Voice to Syrians

Telecomix activists were able to secure roughly 54 gigabytes of data during their hacker attack on the Syrian government's censors. They hope it will help them discover exactly how Syria's government-operated ISP has employed American technology to spy on its people and prevent them from accessing communication services, such as Skype.

Since the summer, activists have been trying to point out secure alternatives to Syrians with Internet access. First, in mid-August, they sent a brief letter to 6,000 selected e-mail addresses. The circular was addressed to "Dear people of Syria, fighters for democracy." The subject line read: "For pro-democracy people of Syria: life-saving communication guidelines." Although the e-mail was just a few lines long, in English and Arabic, it also contained an attachment providing detailed instructions on how to safely avoid censorship as well as a link to the organization's secure computer chat forum. In early September, the collective also set up a website offering anonymizing software and other security tips.

Since then, Arab voices and pseudonyms have proliferated on the chat channels. Some visitors are merely curious, but more and more use the channel to exchange information and ideas between themselves and with Telecomix activists. They report on brutality, the movements of the Syrian army, and the deeds of the Mukhabarat, Syria's dreaded intelligence service.

One visitor wrote that a man with links to the organization had specifically warned him against being too open on Facebook and other social media. Others report on new protests, such as a recent incident in which activists in Damascus allegedly put red dye in a fountain.

It's not clear how many Syrians take advantage of Telecomix's services. Okhin says the French Internet dial-up service alone has been used up to 9,000 times and that the number of Arab-speaking supporters helping the group's translation efforts has risen significantly.

Last week, the beneficiaries of Telecomix's efforts were available in person to answer questions about how they viewed the West's "technical hotline" at the Third Arab Bloggers' Meeting held in Tunis, Tunisia.

Participants included well-known people like Egyptian blogger Wael Abbas, whose videos of police brutality and torture have triggered international outrage in recent years and led to trials and convictions. Abbas, whose work has won numerous prizes, describes the work of Telecomix and the net activists at Tor as "valuable," especially in countries like Iran and Syria.

But he also notes that the revolution in his own country is far from over, citing the fate of 26-year-old blogger Maikel Nabil Sanad as an example. After having been arrested by the military council currently ruling the country, Sanad has been on hunger strike for more than six weeks.

Meetings like the one in Tunis also serve a social function for the bloggers, most of whom work in isolation. After all, assisting a revolution changes people, even if they live half a world away from the action.

A few weeks ago, the Telecomix activists awarded themselves a well-earned break. Urbach couldn't stand looking at the photos and videos anymore, and he was overwhelmed by the stories about imprisoned and tortured Syrians that he was hearing from their Germany-based relatives.

His salvation came in the form of the Chaos Communication Camp, held in mid-August in the town of Finowfurt, northeast of Berlin. It was his first opportunity to actually meet with other Telecomix activists like Okhin.

Reinvigorated, Urbach is now back in the room in his shared Berlin apartment. He continues to spend about €400 ($550) a month of his unemployment checks on his Telecomix activities, and he waits with much anticipation for news from people with names like Muhammad or Ahmad.

Every now and then, he also has to smile. The other day, for example, while conducting maintenance work on his servers, he discovered exactly what they were being used for: Someone in Egypt was downloading an episode of the American sitcom "How I Met Your Mother."

"Oh, well," Urbach says. "Revolution should also be fun every now and again."