Karina Marnissi and her husband Isam had been looking forward to their vacation in Cuba. Relaxing under the palm trees of the Caribbean and enjoying the charms of Havana seemed just the thing. On July 20, they traveled from Stuttgart to the Munich Airport with tickets and visas in their pockets. They had already checked in. All they had to do was check their luggage for the Eurowings flight to Varadero. But they would never make it onto the plane.

When they arrived at the counter, Isam Marnissi explains, a note was lying next to the keyboard of the Eurowings employee. A German national with Tunisian roots, Marnissi says both of their names had been handwritten on it. "Uh oh, we thought, something must to be wrong." They handed over their passports and the woman at the counter called someone and passed along their details.

While she was waiting, she asked if they had any weapons in their luggage. "Of course, we didn't," Marnissi says. "What an absurd idea." Nevertheless, the Eurowings employee had bad news for the couple: The United States had forbidden the Marnissis from traveling, because the flight to Cuba would also cross U.S. airspace.

I beg your pardon, they wondered? Does the U.S. have the right to ban two Germans from taking a vacation in the Caribbean? Even today, they still haven't received any satisfactory answers -- neither from Eurowings, nor from anywhere else. All they are left with is the anger that they were out 1,000 euros for the flights and accommodations. And helplessness that even though they live in Germany, they have become pawns of foreign powers. After all, it appears that the Turkish government under President Recep Tayyip Erdogan was responsible for the fact that the Marnissis wound up on the No-Fly List.

German lawyers have been left stunned by the story. Bremen criminal lawyer Bernhard Docke, who represented former Guantanamo prisoner Murat Kurnaz, says the whole ordeal is "ludicrous." His colleague Gerhard Hillebrand, a specialist in transportation law, says the story could have been invented by Orwell.

The Marnissis say they have only one possible explanation for how they could have landed on the U.S. No-Fly List: There must be a connection to an incident in Turkey that happened last year. That, they say, was their first encounter with government capriciousness.

In March 2017, they had planned to travel to Istanbul together with some friends of theirs, a couple with Turkish roots. The two men both wanted to propose to their girlfriends on the Bosporus. The group made it to the Istanbul airport, but the trip ended in the line for passport control.

Plain clothes police officers conducting spot checks recognized from the first name of the friend of the Marnissis that he had Kurdish roots. His name is Erbil D., like the capital city of the Kurdish autonomous region in Iraq. Apparently, Turkish security found that alone to be cause for suspicion. President Erdogan has had numerous opposition Kurdish politicians arrested in recent years as alleged terrorists. Many Kurds complain of repression.

The security officers led Erbil D., his girlfriend and the Marnissis out of the passport control line. Their mobile phones were confiscated and they had to write their PIN codes on a piece of paper. Erbil D., who does not want his full name published because he claims that nationalist Turks have threatened him in Germany as well, says he was questioned about his family and his background and also about his political views. "I admitted during interrogation that I'm not an Erdogan fan," he says. "Of course, they didn't like that, and it got us into a lot of trouble."

Following hours of discussions, they were told that they posed a threat to public safety and had to leave the country immediately, says D. Since then, both couples have been banned from entering Turkey for life. "We Kurds are used to such things," says D., "but I feel bad that the Marnissis must now suffer just because they were traveling with us."

The Marnissis are Muslims and say they consider themselves to be "totally apolitical." A high-ranking German security official says that the names Erbil D. and Marnissi are not known to his agency.

Is Turkey To Blame?

The three suspect there is an exchange of information between the Turkish and American security authorities. A different case also appears to provide some substantiation for that suspicion. A war reporter from Ireland told The New York Times earlier this year that he was no longer able to obtain a visa to travel to the U.S. after Turkey banned him from entering the country because of alleged security concerns. In 2016, the non-governmental organization Reporters Without Borders also publicized the case of a Spanish journalist and historian who is no longer allowed to enter the U.S., presumably because he reported frequently on the Kurds.

If Turkey, as an ally of the U.S., were to report a suspicion of support for terrorism, "surely it would result in placement on the list," says American attorney Shane Kadidal of the Center for Constitutional Rights in New York. He says he would not be surprised if the U.S. "routinely treats such information from Turkey as correct, even if they haven't been provided with the underlying facts."

The No-Fly List is compiled in an inconspicuous, three-story building without any sign at the entrance in Vienna, Virginia, a suburb of Washington, D.C. But the site isn't totally silent: A loud buzzing noise can be heard here 24 hours a day, the result of the 230 fans in the air conditioning system, necessary to cool countless computers. It was only after neighbors complained to the city council that it emerged who occupied the building: the FBI's Terrorist Screening Center, one of the agency's lesser-known departments. It is tasked with collecting the names of possible terrorists and compiling them in the Terrorist Screening Database.

Starting in 2003, U.S. police and intelligence services in the U.S. began trying to fix the significant shortcomings that had come to light as a result of the Sept. 11, 2001 terrorist attacks. They began collecting comprehensive data on suspected terrorists and merging it with information collected by other government agencies. Over the years, the agencies have amassed a massive amount of information. The security authorities are said to have stored hundreds of thousands of identities, a huge dataset that is used to create smaller observation lists such as the No-Fly List.

In September 2014, the list of people not allowed to fly into the U.S. or through U.S. airspace contained 64,000 names. Before 9/11, only 16 people had been on it. The American government does not provide information on the criteria used to determine whether a person should be placed on the list.

In 2014, though, a judge ruled that the government is required to at least tell its own citizens and permanent residents of the U.S. whether they are on the list. "In addition, those affected can request that the reasons be given, unless they are classified, and have the option of having their names reviewed to see if they can be removed," says Ben Wizner, a lawyer with the American Civil Liberties Union (ACLU).

The ACLU has been litigating on behalf of 13 American citizens over the issue since 2010. Many are military veterans. Some were no longer allowed to fly back home after, for example, visiting relatives in Yemen. A verdict is still pending in the case.

One Malaysian citizen managed to successfully challenge her inclusion on the No-Fly List. She had somehow landed on the list because an FBI employee had checked the wrong box on a form.

So do the Marnissis also have any chance of mounting a successful legal challenge? Experts say they don't stand a chance. In the case of the Malaysian, she had a valid student visa for the U.S. and her daughter is an American citizen. "The case law doesn't apply to German citizens," says ACLU's Wizner. "My advice to the Germans who are affected by the flight ban is that they should go to the embassy or consulate and describe their case." He says diplomats are sometimes willing to provide information if they have it.

But Wizner's colleague Jeffrey Kahn, a professor of law at Southern Methodist University in Texas, is less sanguine about such prospects. For non-Americans, he says being on a watch list is "kind of like traveling in the forest through fog. You only occasionally get to see through the fog and that is when you actually try to use a ticket."

He says the Marnissis also can't expect any help from the airlines. A spokesman for Lufthansa, the parent company of Eurowings, says that airlines are "obliged to comply with the entry regulations of the country of destination. Otherwise, they can be faced with high fines or a withdrawal of flight rights if an airline accumulates a number of instances." The airline, he adds, "has no information on the reason for an entry ban whatsoever." The spokesman says there are no exact figures available for the number of passengers who have been refused boarding, but insists that there have been very few.

The article you are reading originally appeared in German in issue 36/2018 (September 1th, 2018) of DER SPIEGEL.

Munich lawyer Magnus von Treyer says that in some cases, he wouldn't doubt that some airlines are abusing the existence of the no-fly lists. Treyer represents a Bavarian couple currently involved in a legal dispute against a Spanish airline. His clients wanted to fly to Cuba via Madrid last year, he says. But they were denied boarding on their onward flight once they got to Spain. The couple says the airline justified the refusal by saying the U.S. wouldn't allow it.

But Treyer says his clients were later informed by the U.S. Consulate that their names were not on any watch list. The airline is now alleging it never made any such claim at all and that the passengers had simply been too late for their connecting flight. Attorney Treyer, however, believes that the aircraft was simply overbooked and that the flight crew may have made up an excuse to free up some seats. 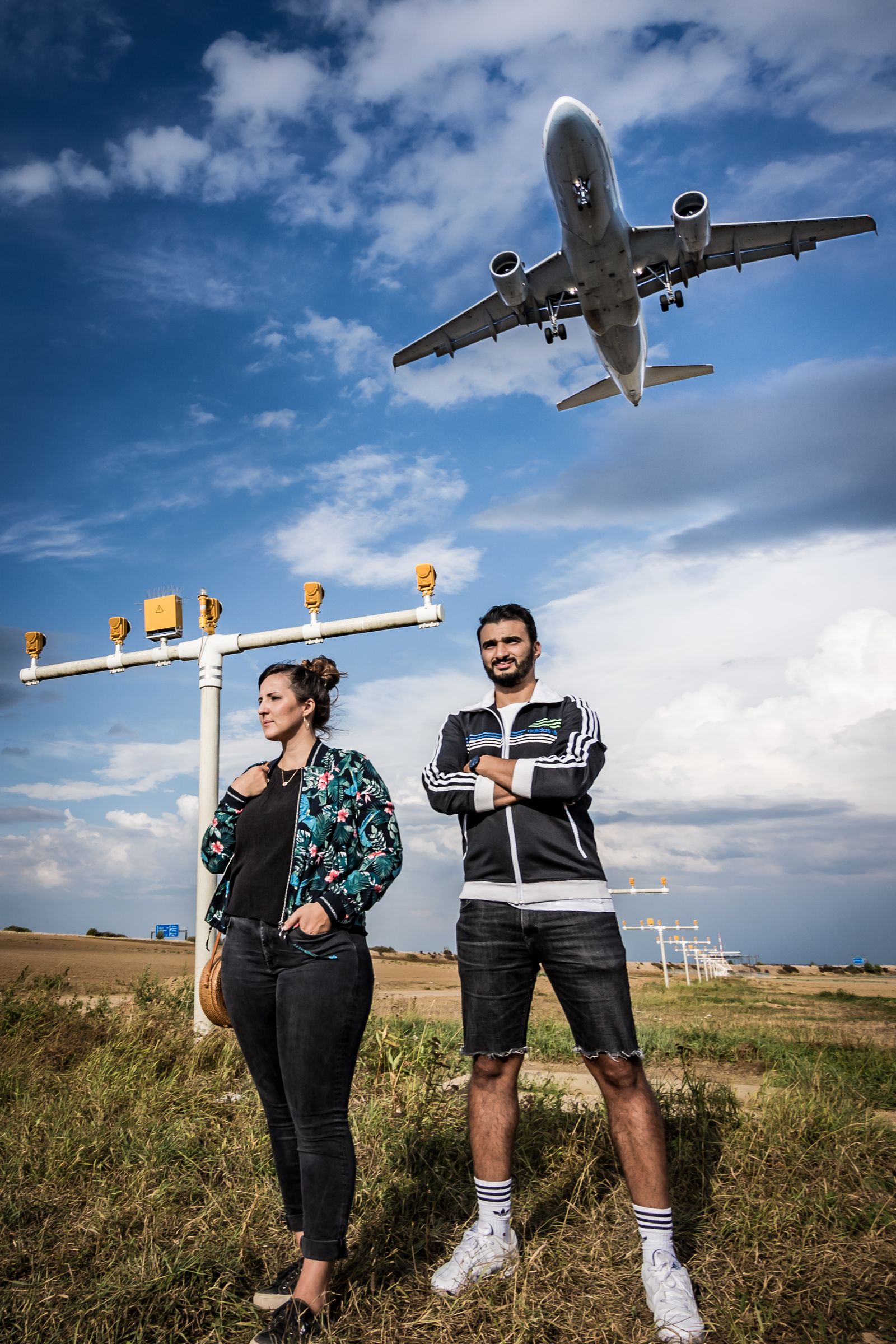