Elmar Brok, a prominent member of the European Parliament with Chancellor Angela Merkel's Christian Democrats, has a long trip behind him. His plane landed at 3 a.m. local time in Moscow on Thursday; back in Brussels, the clock was just striking midnight. Between the Russian capital and the EU headquarters there is a three-hour time difference -- and significant political differences as well.

Brok traveled to Moscow for talks as part of the Petersburg Dialogue, the German-Russian forum called into being under former Chancellor Gerhard Schröder. And this year, the dialogue has the monumental task of repairing the many rifts currently open between Moscow and Berlin. Just before Merkel herself arrives in Russia on Friday for talks with President Vladimir Putin, relations between the two countries are worse than they have been in a long time.

In particular, Berlin is concerned about the Kremlin having recently passed laws making it more difficult to organize and participate in demonstrations as well as making it easier to try people for treason. Putin's administration has also labelled non-governmental organizations as "foreign agents." Germany's federal parliament reacted last week with a resolution that was bitingly critical of Putin. Moscow then launched a verbal attack on Andreas Schockenhoff, the initiator of the resolution and Merkel's coordinator for cooperation with Russia.

Schockenhoff has been a vocal critic of the Putin administration in recent months, having blasted the Russian judiciary's handling of the protest punk band Pussy Riot as well as Moscow's approach to the conflict in Syria. Since then, Russian diplomats have been treating Schockenhoff as a persona non grata. Likewise a member of Merkel's conservative CDU, Schockenhoff recently tried to get an official appointment at the Russian Foreign Ministry as part of his duties as co-leader of the Petersburg Dialogue's civil society working group. But he was denied.

This week's meeting of the Petersburg Dialogue marks the 12th annual gathering of the group, but never before has it been viewed so critically. In assembling its delegation, Moscow has long shown a preference for Kremlin loyalists over civil rights activists. And the German side has in the past gone out of its way to avoid being overly critical of Russia, making it seem almost complicit in Moscow's lax attitudes toward human rights. The gatherings have often seemed largely symbolic. Working group meetings lasted but a few hours -- to be followed by a choice cultural program.

It isn't just the Petersburg Dialogue, though, that is in the dock, but Berlin's entire approach to Russia. Germany has long seen itself as Russia's advocate in Europe. Both former Chancellor Helmut Kohl and Schröder wanted to win over Russia as both a strategic partner and as a friend.

Increasingly, however, Berlin is unsure how it should deal with Russia's recent backsliding toward authoritarianism. Schockenhoff even suggested that the Petersburg Dialogue be ended should "a critical debate no longer be possible." Openness, however, has always been a problem for the Russian side; Putin's officials have often reacted to criticism with furious counterattacks and threats to break off talks. "The Sword of Damocles hangs above us," said one member of the German steering committee during meeting preparations.

At 8 a.m. local time, European parliamentarian Brok finds his way into the breakfast room of the five-star Moscow hotel Ukraina, a high-rise built in the Stalinist-Gothic style. When he looks out the window, he sees a hammer, sickle and red star hanging on the façade facing the hotel. The symbols of the once mighty Communist global empire have been newly restored. Bodyguards employed by rich oligarchs staying at the hotel lounge in leather armchairs in the lobby.

'We Cannot Accept That'

The Ukrainia hotel itself has become a symbol of the new Russia -- for the country's complicated history, its old claims to world power and its new self-confidence. Brok takes a bite of his fried egg. "I don't understand why Russia and Europe are not able to admit that they share strategic interests," he says.

In Moscow, the Petersburg Dialogue is trying a new approach this year, with new faces and more time for debate, spiced with a pinch of critique. German co-chair Lothar de Maizière showed the way during the event's opening earlier this week in comments following a speech by his Russian counterpart, the Putin confidant Viktor Zubkov. If Moscow requires NGOs to register as "foreign agents," de Maizière said, "we cannot accept that."

The audience was different as well, with the average age decidedly younger than in previous iterations. Twenty young delegates chosen from many more applications were invited to freshen up proceedings. Christopher Lauer, for example, floor leader for the Pirate Party in Berlin's city-state parliament, was present -- wearing tennis shoes. In his working group, he was sitting at a table with former Soviet General Secretary Mikhail Gorbachev and speaking about Germany's protest culture.

But not all efforts at innovation have been welcomed at this year's Petersburg Dialogue. In the politics working group, German delegates had hoped to challenge the authors of the NGO law over the use of the term "foreign agents," but they were thwarted by the Russians. Furthermore, the second round of working group meetings was cancelled on short noticed in favor of a Tchaikovsky concert.

The Russian side reacted to the German request for an open discussion by ratcheting up the rhetoric. According to the schedule received by the German delegation, the brilliant and caustic speaker Vyacheslav Nikonov, grandson of former Soviet Foreign Minister Vyacheslav Molotov and member of parliament with Putin's United Russia party, was to speak. But the Germans only learned that Alexey Pushkov would speak after him when he took a seat next to Nikonov on stage. His name hadn't been included on the guest list.

Reminiscent of the Cold War

Pushkov, who chairs the foreign affairs committee in Russian parliament, long served as the host of a popular television show. Two decades ago, he was a speechwriter for Gorbachev. But what he had to say in the Hotel Ukraina was less reminiscent of Perestroika than it was of the Cold War.

The West, Pushkov barked, is treating Russia like a second-class partner, as though it "remains tainted by its Communist past." The United States and Europe, he continued, have long since ceased to be role models. In comments directed at Green Party parliamentarian Marieluise Beck, seated in the first row of the audience, Pushkov said that instead of warning Russia on civil rights, she should "found a human rights commission for Spain and Greece." During his 20 minute speech, Pushkov went on to attack Germany for behaving like a schoolmarm -- before marching off the stage and into his waiting car.

Schockenhoff was also sitting on the podium, but the Russians spoke as though he weren't present at all. The German parliamentary resolution, intoned a representative from the Russian Foreign Ministry, "was neither friendly nor objective, as though the author were unaware of the situation in Russia."

A former Gorbachev confidant then gave the Germans some advice "that you might not like, but which could be useful. You have to see the truth. The opposition you are working together with has neither influence nor support in the country."

Following the onslaught from Pushkov, Beck replied by politely recalling Gorbachev's idea of a shared European house. It is, she said, only natural to worry about what is going on in the neighborhood. But the Russians were in no mood for diplomatic nuance.

The aggressive tone could very well be a taste of what is awaiting Merkel upon her arrival on Friday. "They were playing rugby while we were playing softball," said a German participant after the session. "But we will remain friends nonetheless." 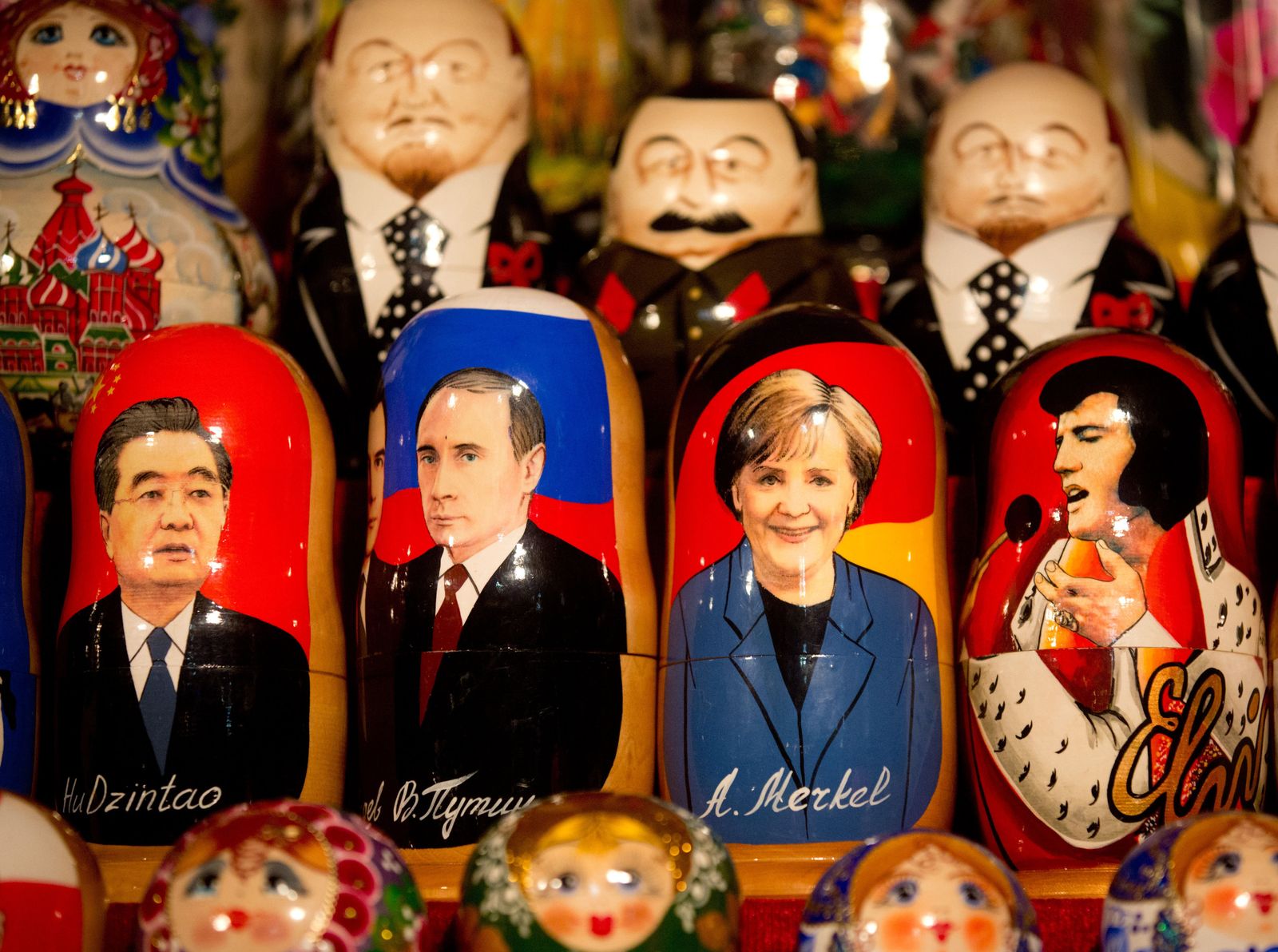 Merkel and Putin, among others, as matryoshka dolls at souvenir stand near the Kremlin