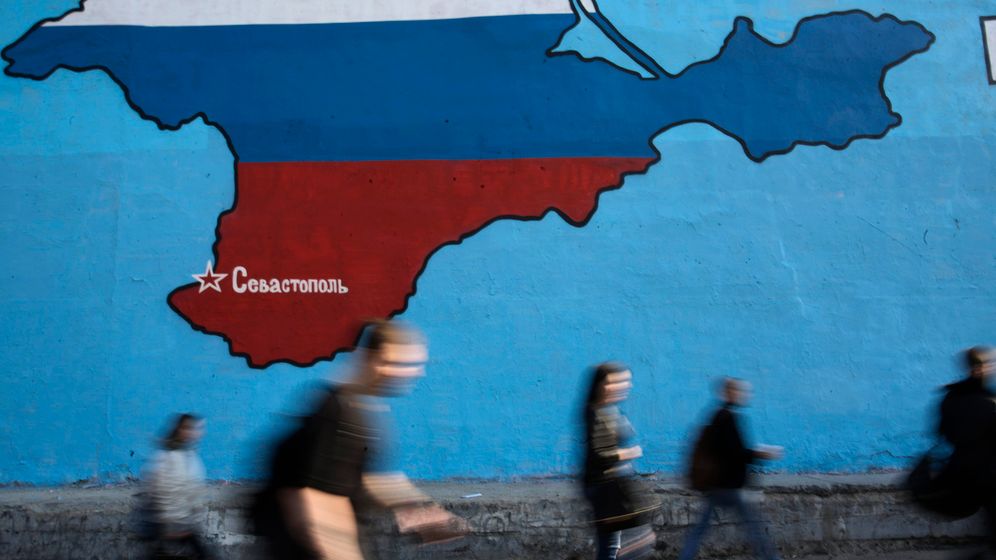 Last September, Vladimir Putin invited Russia experts from around the world to a conference, held halfway between Moscow and St. Petersburg. At the gathering, the Russian president delivered a passionate address. "We will never forget that Russia's present-day statehood has its roots in Kiev. It was the cradle of the future, greater Russian nation," Putin said. He added that Russians and Ukrainians have a "shared mentality, shared history and a shared culture. In this sense we are one people."

At the time, German and European leaders still believed that it would be possible to bind Ukraine to the European Union by way of an Association Agreement and to free the country from Moscow's clutches. But Putin had long before made the decision to prevent such an eventuality.

Indeed, he had already used the Crimean Peninsula as his stage for a symbolic and vaguely menacing appearance in the summer of 2012. Astride a three-wheel motorcycle, a black-clad Putin was photographed at the head of a group of staunch nationalist bikers. Like a group of modern-day knights, they tore across Ukrainian territory. Even then it was clear who Putin thought was the true leader of Ukraine: himself.

Putin knows that the vast majority of Russians are on his side when it comes to his Crimean policy. His cool and calculated -- and thus far remarkably peaceful -- annexation of the peninsula led to celebrations across Russia. After all, the conviction that Crimea -- with its "Hero Cities" of Sevastopol and Kerch in addition to Russia's Black Sea fleet -- is Russian soil is widespread and shared even by many in the opposition camp. These are places, Putin said in his address last week, that are "dear to our hearts" and for which Russian soldiers fought and died. Even Nobel Peace Prize laureate Mikhail Gorbachev said last week that the West should accept the results of the Crimea referendum. "This should be welcomed instead of declaring sanctions," he said.

Putin's popularity rating had already begun climbing as a result of the Winter Olympics in Sochi, with even Kremlin-critical pollsters reporting 67 percent approval. Now, that number is approaching an astonishing 80 percent. But what does it mean? Is the "reunification" with Crimea merely the last twitch of a former Soviet superpower as its successor state Russia rebels against a future as a less meaningful regional power? Or is it the beginning of a wave of re-conquests from a country that has seen itself for centuries as a hegemonic power in Eastern Europe? Is Putin a neo-imperialist or is he just a national leader with his back to the wall, one who is merely interested in protecting his country's security interests?

The world has changed since last week. The Ukraine crisis represents the most recent culmination of an extended process of estrangement between Russia and the West. The biggest country in the world will now likely turn its attentions more to China and India.

In Europe, meanwhile, the specter of war has returned, according to European Parliament President Martin Schulz.

"Ever since Putin's speech at the Munich Security Conference in 2007, everyone should have known that Russia would no longer accept Western games within its sphere of influence," says Fyodor Lukyanov, Chairman of the Presidium of the Council on Foreign and Defense Policy in Moscow. "But the West never took Putin seriously and never developed a strategy to deal with Russia's legitimate interests."

The West, says Lukyanov, disregarded every initiative from Moscow to discuss a new security regime for Europe, constantly suspecting that Russia was seeking to drive a wedge between Europe and the United States. Putin's proxy, former President Dmitry Medvedev, even presented a draft for a European security treaty in 2009, one which addressed territorial disputes and renounced the use of violence. "We are now paying the price for not having sat down at the table then," Lukyanov says.

Now, when the US and EU threaten to turn away from Russia, few in Moscow are particularly impressed. Aside from a couple of billion-dollar deals that benefited both sides, people close to Putin say, the only approach from the West consisted in NATO's steady eastward advance. Instead of appreciation for Gorbachev's having ushered in a peaceful end to the Cold War, the Russian view holds, the West has sought to waltz all the way into Red Square.

The view from the windows of the Kremlin is first and foremost a geo-political one. During Soviet times, the distance between the Russian capital and the Western military alliance was 1,800 kilometers (1,120 miles). Were Ukraine to become a member of NATO, as the US has long desired, this distance would be reduced to less than 500 kilometers. The Russian military is afraid that they would lose once and for all the strategic distance that allowed the country to survive the invasions of both Napoleon and Hitler.

This fear is partially the result of the traumatic, post-Cold War reordering of Eastern Europe. Eight years after the Soviet Union's collapse, Poland, the Czech Republic and Hungary joined NATO. In 2004, they were followed by Bulgaria, Romania, Slovakia, Slovenia and the three Baltic states; in 2009, Albania and Croatia followed suit. When NATO intervened in the Kosovo War by bombing Belgrade in 1999, Russia was furious; Serbia had been a close ally of Moscow's for centuries. In 2008, US President George W. Bush's proposal to extend NATO membership to Georgia and Ukraine was seen by Russia as a humiliation.

Now, Putin is releasing his people from their collective feeling of shame. "If you compress a spring all the way to its limit, it will snap back hard," the Russian president said during his address in the Kremlin last Tuesday.

Putin has a decisive advantage in the struggle for Ukraine: He has the initiative. He acts and the West reacts. And Moscow has plenty of options.

The first option involves Putin making no further advances, an eventuality that many in the West quietly see as the best way to end the crisis. In exchange for Western toleration of Russia's Crimean land grab, Putin would refrain from meddling in eastern Ukraine and would still be able to bask in the admiration of the Russian people.

But there are other options available. Putin could use pro-Russian groups, economic pressure and his own secret service to destabilize Ukraine to such a degree that it plunges into civil war. For such a scenario, the weak and chaotic government and parliament in Kiev are ideal partners, not to mention the radical nationalists who rose to prominence during the Maidan demonstrations. Indeed, the divisions within Ukraine are already prominent. It was only due to intense pressure exerted by Berlin and Brussels that the acting government in Kiev abstained from signing a law that would have prohibited Ukrainian regions from making Russian a second official language. The planned measure had triggered outrage in eastern Ukraine.

One-quarter of all Ukrainian exports go to Russian, with 2.9 million Ukrainian workers in Russia having sent $3 billion (€2.17 billion) to relatives back home last year, an amount equivalent to roughly 10 percent of the country's budget. A Russian boycott would likely mean a rapid end to the current Ukrainian government, unless the US and Europe were to jump in with a hefty aid package.

As such, Putin could simply play for time in the hopes that sooner or later Ukraine will simply fall into his lap like a ripe fruit -- perhaps even a Ukraine bloated by Western aid. Under no circumstances, however, will Putin simply leave Ukraine to the West. Some close to Putin even believe that the Russian president would be willing to go to war to prevent that from happening.

Hardliners in the Kremlin are urging Putin not to stop at Crimea, arguing that areas that belong to Russia anyway should be reunited with the motherland. Never before, they say, has the opportunity been quite as auspicious. Putin's reputation among the Western elite is already at a low point and NATO would certainly not risk a nuclear war on Ukraine's account. Kremlin leaders are fully aware that Germany's willingness to make sacrifices on behalf of, for example, the Russian-speaking industrial city of Donetsk is rather limited.

"Russia should support the pro-Russian areas in southern and eastern Ukraine and establish a line of security from Kharkiv to Odessa, without absorbing these areas into the Russian Federation," advises political scientist Alexander Nagorny. A referendum could then transform Ukraine into a kind of federal state. Moscow would have influence in Kiev, a NATO membership for Ukraine would be prevented and a bloody war avoided.

The West is now attempting to force Putin to back down by way of sanctions. It is a strategy that is much more comfortable for the US than it is for Europe, with just 1 percent of American trade being conducted with Russia and a lack of reliance on Russia oil and natural gas. Germany's trade with Russia, by contrast, represents 3 percent of Berlin's imports and exports, with a value of €76.5 billion. One-third of Germany's oil and natural gas imports come from Russia. It has always sounded good when EU politicians insisted that Russia cannot be allowed to have a say in Ukraine's future. But it was never particularly realistic.

When it comes to Ukraine, Putin feels deceived by German Chancellor Angela Merkel, whose power instincts he admires, as well as by the US. "The West's true aim is that of toppling the bothersome Putin," says the Moscow-based political scientist Sergei Markov, one of Putin's most loyal acolytes. That is why initial sanctions targeted the president's billionaire friends. The West, he says, is trying to turn Russia's financial elite against Putin.

But on the short- and mid-term, at least, sanctions are likely to strengthen Putin. His propaganda machine will present any economic difficulties as being the fault of the West, which will likely draw together the country's anti-Western, conservative majority. Even in Moscow, where never-published surveys from a year ago showed that Putin had lost his majority, sanctions will be seen as yet another indignity visited on Russia by the West.

"First the German and Polish foreign ministers make appearances on the Maidan, and now they want to punish us for no longer being willing to simply accept everything," says one senior bank manager who has never voted for Putin in her life. She wants Putin "to deliver a strong response so that the West understands that you can't treat us like that."

Russia, as one proverb would have it, has great patience, but its response will be all the more severe. Russian confronts pressure with pressure and external critique has traditionally been met with defiance. In 1830, France angrily protested against czarist Russia's violent crushing of an uprising in areas including present-day western Ukraine and the Baltic states. Paris even threatened military action.

Renowned Russian poet Alexander Pushkin penned a response in a poem entitled "To the Slanderers of Russia." "What are you sounding off about, you orators of nations? Why do you threaten Russia with anathema? Leave off: It is a battle of Slavs amongst themselves, a domestic, ancient quarrel, already weighed by fate. A question you will not decide."

Russia's recent reaction to European and US sanctions was not dissimilar. Putin announced that he intended to open an account with Rossiya Bank, which had been targeted by Washington, and Kremlin advisors expressed pride at having been included on the list. Fully 353 of the 450 parliamentarians in the Duma published a request that they too be added. Not much would seem to have changed in Russia since the times of Pushkin. 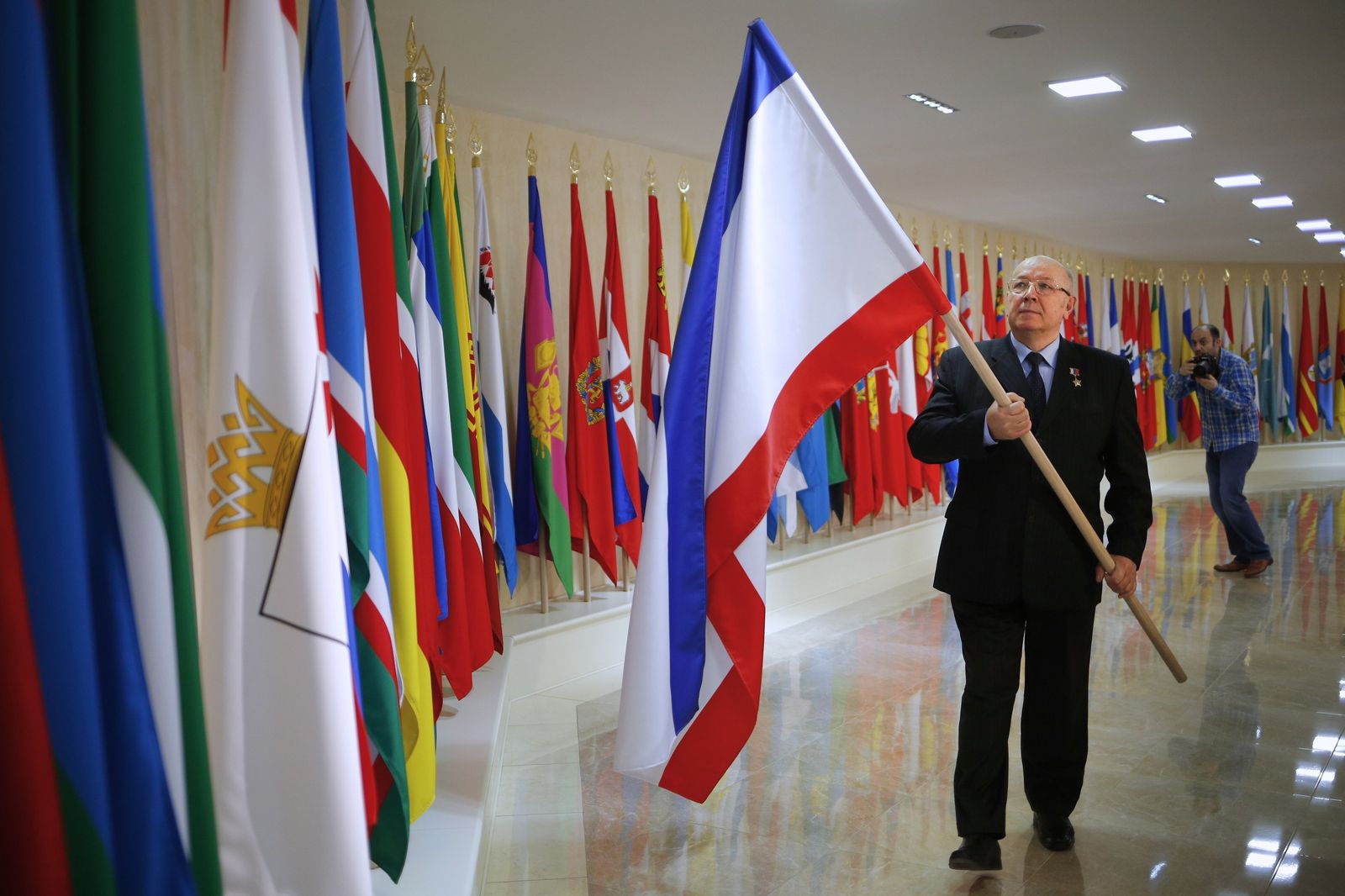 Russian lawmaker Alexander Chekalin carries a Crimea flag to add to a line of Russian regional flags in the hall of the Russian Federation Council building in Moscow on Monday. Another flag, that of Sevastopol, was also added. Russia saw US President George W. Bush's proposal to extend NATO membership to Georgia and Ukraine as an affront.