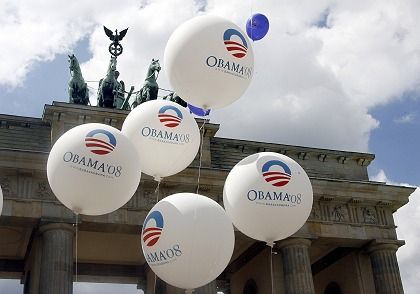 What will Obama's line be at the Brandenburg Gate? Ich bin ein trans-Atlanticist?

Plans for a visit by Barack Obama, the presumed Democratic candidate for president of the United States, have moved forward -- slowly -- in Berlin, where he may give a speech before the Brandenburg Gate this summer.

Germany's ambassador to Washington, Klaus Scharioth, has reportedly worked for weeks to convince Obama's campaign that the candidate's only large European appearance should take place in Berlin. Foreign Minister Frank-Walter Steinmeier talked to Obama by phone last April and learned that he might visit Germany. In the meantime, according to SPIEGEL sources, Steinmeier's staff has set plans in motion for an Obama appearance in the capital by the end of July.

Both Steinmeier and his boss, Chancellor Angela Merkel, have expressed willingness to meet Obama. A member of Obama's campaign has already met with Berlin's mayor, Klaus Wowereit, and the Secret Service has reportedly started to investigate security questions surrounding a visit.

No location has been announced, but the Berlin state government has reportedly been asked whether Obama can speak in front of the Brandenburg Gate, where former US President Ronald Reagan gave a famous speech in 1987. Reagan made a show of asking then-Soviet premier Mikhail Gorbachev to "tear down" the Berlin Wall.

The Brandenburg Gate has fresh significance for an American presidential candidate, since a large new US embassy officially opened there on July 4.

Former US President John F. Kennedy gave a famous Berlin speech of his own in 1963, but he appeared in front of the town hall in Schöneberg -- then the seat of government in West Berlin -- which lies several miles from the Brandenburg Gate.

The itinerary for Obama's summer tour is expected to include France, Great Britain, Jordan and Israel. Berlin Mayor Wowereit said, "It would be a good signal for German-American relations if the presidential candidate paid his respects in Berlin."

Indeed, support in Germany for Obama is broad. A poll taken by German pollster Emnid for publication in the Bild am Sonntag newspaper this weekend found that 74 percent of Germans said that if they could cast a ballot in the US election, they would vote for the presumptive Democratic Party nominee. Only 11 percent said they would vote for his Republican Party contender, John McCain.