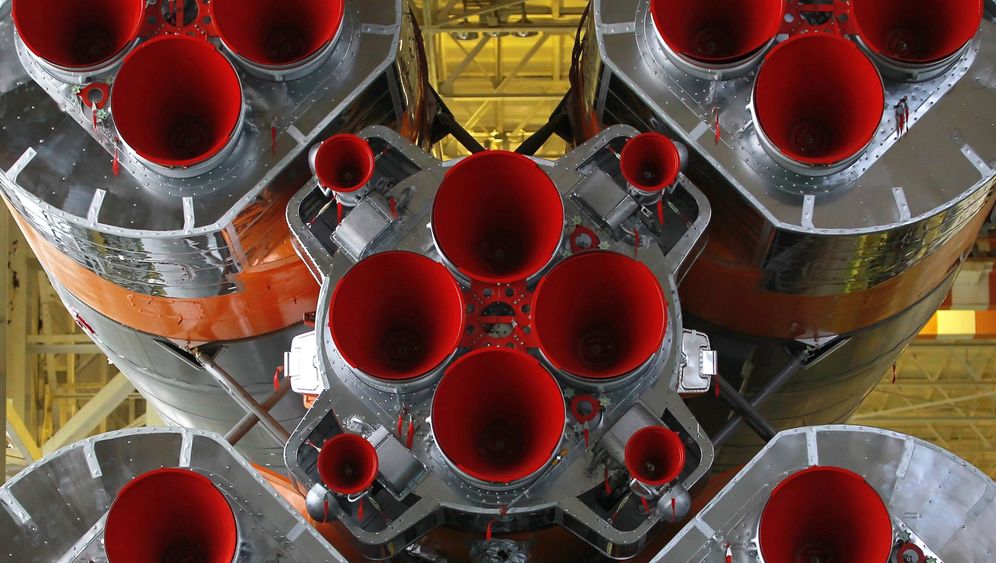 The Russians are coming. And they want to fire off a rocket. The old man will have no choice but to flee. In fact, he's already looking forward to it.

"A rocket launch like this is almost like watching a second sun rise," raves Serge Colin. It's a spectacle he's enjoyed more than 60 times. "But, this time," he says, "it will be a very special day."

Colin, a Frenchman with a pointed moustache, is 80, but he seems much younger. Since retiring from a career as a ship's captain, he has worked as a museum guide on Ile Royale, the site of a notorious penal colony off the coast of French Guiana. The prison's ruins were made famous in the classic film "Papillon."

Shimmering in the distance behind the mainland coast lies a jungle the size of Austria that is home to only 200,000 people. French Guiana, lying north of Brazil, is a French overseas department, a tropical outpost of the European Union.

On clear days, Colin can see the launch pads at the spaceport in Kourou, where the European Space Agency (ESA) has been launching its Ariane rockets into space for more than 30 years. Since they live directly beneath the flight path, the island's roughly 20 residents are evacuated before each launch.

A Giant in a Strange Land

This Thursday, a Russian Soyuz rocket will lift off from the tropical paradise for the first time. If all goes well, the 46-meter (151-foot) monstrosity will hurtle into the sky dragging a fire trail behind it. Its mission is to launch two satellites into orbit that will lay the foundation for Europe's Galileo navigation system, which will compete with America's GPS satellites.

The Russians' new rocket launch complex, 13 kilometers (8 miles) from the European launch pad, is sealed off by three layers of barbed wire, checkpoints, teams of guards, video cameras and electric fences. "No details!" Jean-Claude Garreau snaps at a group of journalists at the site. "No detailed photos. This here is highly confidential!"

The ESA manager is standing in the shadow of the Soyuz rocket, a giant, cigar-shaped hunk of steel with a fuel capacity of more than 60 metric tons (132,000 pounds) of kerosene, laid out in an air-conditioned, hermetically sealed industrial building. Russian teams in khaki uniforms and heavy boots are bustling about the rocket.

The two men in charge stand out from the rest in their elegant tropical outfits of white trousers and leather loafers. Garreau is chatting with Dmitry Baranov from Russia's Samara Space Center. After working in the Kazakh city of Baikonur for several years, the 31-year-old has now come to French Guiana to make sure nothing goes wrong in Kourou. In mid-sentence, the men switch between French, Russian and space-industry jargon, complete with its cryptic terms, such as Mais bien sûr, Geo, Leo and Mik.

The Soyuz launch in the South American wilderness is a major event. The hotels are booked solid to accommodate the crowd of politicians, diplomats, business executives, journalists and lobbyists expected to attend the launch, including Russian Prime Minister Vladimir Putin and French President Nicolas Sarkozy.

The telegenic fireworks display will form the perfect backdrop for hand-shaking and back-slapping. But the rocket show is also a diversion from a drama unfolding behind the scenes as the three space powers -- the United States, Russia, and Europe -- compete for dominance in the satellite-transport business while simultaneously fending off competition from newcomers, including low-wage countries like China and India.

Europe's Ariane launch vehicle has an unusual disadvantage in this new space race: It's too powerful. With its state-of-the-art hydrogen propulsion system, it can heave a payload of more than 10 metric tons into a geostationary orbit. But since most satellites weigh less than half as much, impatient customers are often forced to wait a long time before another satellite is found for a cost-saving tandem flight.

Russia's Soyuz spacecraft has the opposite problem. Based at the Baikonur spaceport in Kazakhstan, the rocket isn't powerful enough to cope with the size of many telecommunications satellites.

The spaceport in French Guiana offers the Russians an elegant solution. Located only five degrees latitude north of the equator, the earth's surface in Kourou moves faster than it does in Baikonur, which lies at a latitude of 46 degrees north. It's similar to how a carousel moves more slowly near its axis than along its perimeter. This thrust of additional tangential velocity near the equator boosts a rocket's performance. While the Soyuz can only hoist a 1.7 ton payload into orbit from the launch site in Baikonur, its performance jumps to three tons at the equator.

As a result, the two competitors are dependent on one another. The Russians have the right rocket, while the Europeans have the right launch site. Both sides benefit from the arrangement. In return for being allowed to use the ESA's equatorial launch pad, among other things, Russia has held out the prospect of ordering aircraft from the Europe-based aircraft manufacturer Airbus.

But it's a tricky partnership. In fact, in this marriage of convenience, cooperation has been anything but smooth. As a result, the first Soyuz launch is now taking place two years later than originally planned.

One of the problems stems from the Russians' insistence on creating an exact replica of the launch pad in Baikonur that they were used to. The facility seems archaic with its four steel robotic gripper arms, which engage the rocket to hold it suspended over a giant concrete basin that laterally diverts the force of the blast.

The Soyuz is not just any rocket, either. It is the pride of Russia and, with a track record of more than 1,700 liftoffs, it is also the worlds' most successful rocket. Versions of the Soyuz have been flying into space since 1957. When Soviet cosmonaut Yuri Gagarin became the first human to venture into outer space 50 years ago, he was traveling in a precursor model of today's Soyuz rocket.

Over time, Russian engineers have modified the Soyuz to perform optimally in the bone-dry climate of the Kazakh steppes. In Kourou, however, the tropical rain and hot, salty air pose dangers to the rocket even before launch. To prevent rust, engineers have developed a special, eight-story mobile housing to protect the launch pad.

The Russians were also unaccustomed to the Europeans' significantly higher safety standards. "In the steppe, it doesn't really matter if a rocket spins out of control and lands somewhere after a false start," says Thomas Ruwwe from the German Aerospace Center (DLR). While flights are automatically aborted after a false start in Baikonur, the Soyuz used in Kourou has been retrofitted with a remote control system so that it can be manually aborted, if necessary.

The roughly 300 Russians working at the space center in South America have transformed the sleepy town of Sinnamary, an impoverished village on a muddy estuary, into their new Star City, the area near Moscow where the Yuri Gagarin Cosmonaut Training Center is located. Vanilla vines and bananas grow wild along the side of the road.

In the evening, a stream of buses filled with uniformed engineers travels from the Soyuz launch pad to the Hotel du Fleuve. The pool is full of gruff men, while rum bottles are passed around in the garden. Most journalists are quickly turned away with a nervous "nyet." The temporary residents of this tropical Star City typically converse in the language of a military barracks and treat everything as top secret.

Speaking in broken English, a young engineer describes his time in Baikonur. He says he is enjoying his three-month stint in the tropics, but that he doesn't understand the Europeans either culturally or linguistically. For example, he finds their obsession with the environment baffling. The ESA staff use 600 measuring stations to monitor every Ariane liftoff so as to ensure that the region's flora and fauna are not adversely affected. Meanwhile, the garbage dumps often burn for weeks in Kourou, and illegal gold prospectors in jungle camps are poisoning more than 5,000 kilometers of rivers with mercury.

The engineer finds the French penchant for strikes particularly bizarre. On one occasion, an Ariane launch even had to be postponed because workers were blocking the entrances to the space center. Such a lack of discipline would be unthinkable in Baikonur, he says.

The Russian engineer suddenly spots a supervisor and quickly says his goodbyes. Officially, only the managers -- the men in white trousers and loafers -- are allowed to speak to the press.

Preparing for the Big Event

As night descends over muggy Sinnamary, groups of Russians can be seen strolling along the country road into the village. Later on, they sit at the Kafrine Restaurant, eating shark fillets with vanilla sauce and taking turns singing karaoke with their European counterparts. Local youths loiter on the street outside, hoping to catch a glimpse of the foreigners.

The pink walls are decorated with ruble bills and rockets as well as a portrait of a young officer in a white uniform, Yuri Gagarin. Among the Russians, the first man to journey into outer space enjoys something approaching the status of a saint.

At around midnight, Creole jazz-funk drones from the Bar L'Alternative on Kourou's waterfront, where drug dealers and prostitutes from Brazil roam the streets. Later on, the musicians stand at the bar and discuss where to get the best view of the launch along the beach. Launches are a social event in Kourou.

On the evening before the launch, the Royal Ti'Punch, a catamaran, will sail across to the former prison island to pick up Colin, the museum guide, and his neighbors and bring them to safety. Two measurement engineers will remain behind in a bunker to monitor the rocket's flight path.

Meanwhile, heavily armed soldiers with the French Foreign Legion will seal off the space center to prevent acts of sabotage. As an additional precaution, the power lines to the outside world will be disconnected. The space center will then be supplied with electricity from its own diesel generators.

The Soyuz fuel tanks will only be filled a few hours before liftoff. Sixty-meter lighting rods are installed to protect the tanks should there be a thunderstorm. Then the gigantic garage on rails will be rolled to the side to prevent it from being destroyed by the acoustic pressure created by the spacecraft as it lifts off.

The countdown will be done in Russian and French. The members of the Baikonur team will be holed up in their own concrete bunker, while the Europeans will monitor the airspace from their spaceport 13 kilometers away.

Soyuz missions have a 98.2 percent success rate. The Soyuz is considered the absolute workhorse of space flight. "The takeoff is routine," says Dmitry Baranov, as he gazes almost tenderly at the giant spacecraft in the hangar behind him.

When asked what his greatest challenge is, the Russian manager smiles and points to a rash on his neck caused by a moth. "Believe me," he says, "the moths are the biggest risk factor here." 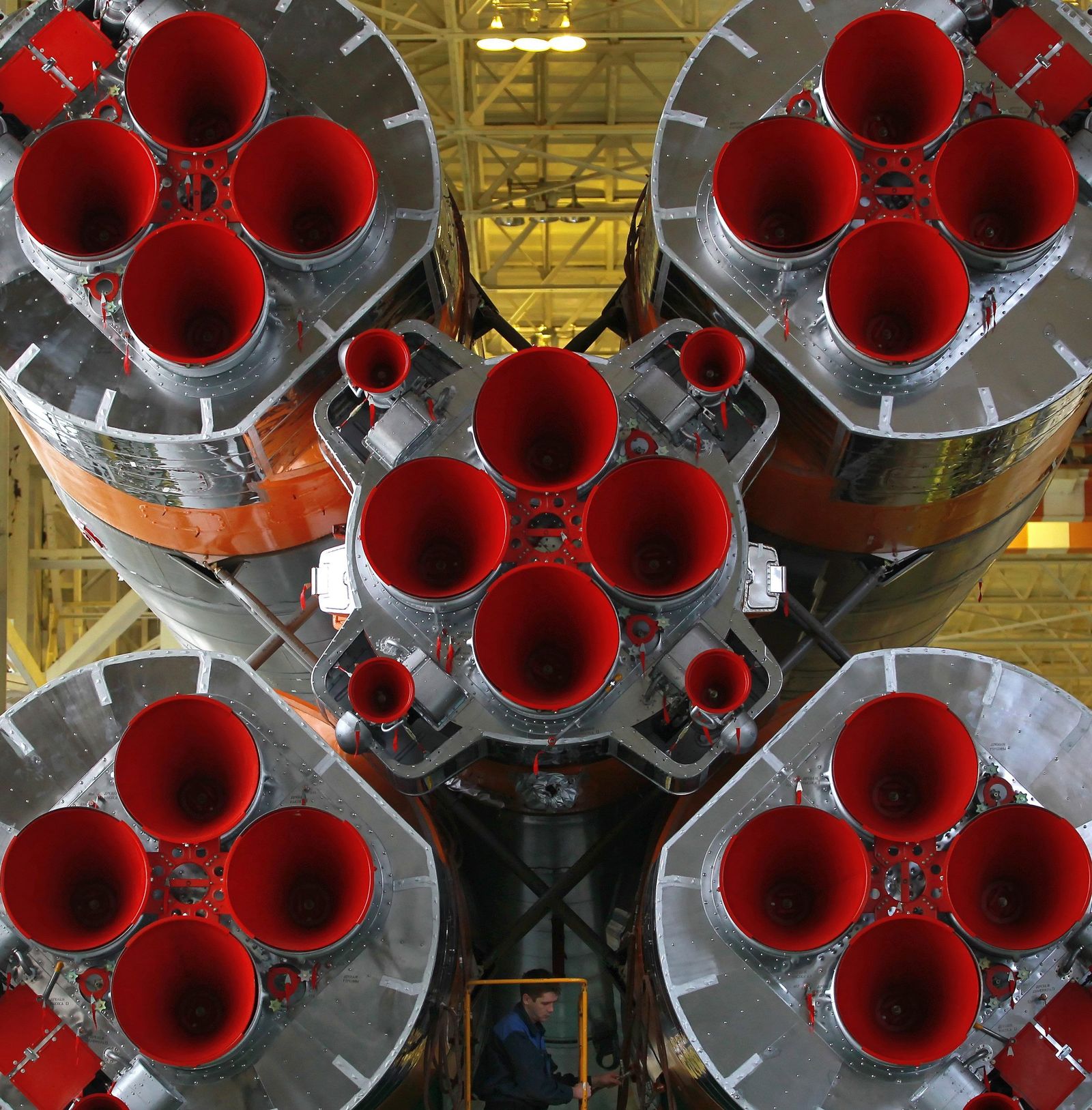 Russia has successfully launched more than 1,700 of its Soyuz rockets into space, making it the absolute workhorse of space flight. They are typically launched from a cosmodrome in Baikonur, Kazakhstan.