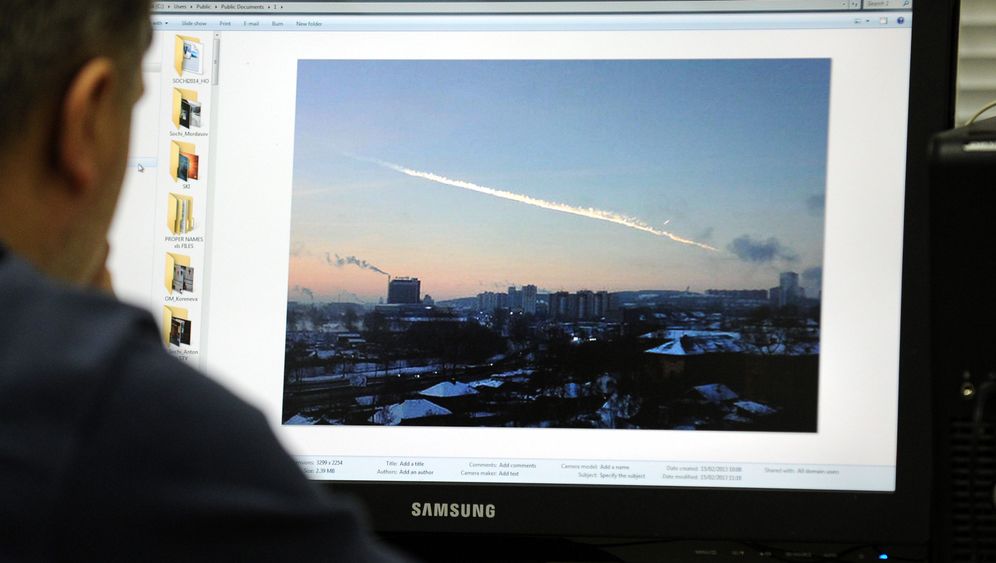 The students in School Number 15, in the city of Chelyabinsk some 1,500 kilometers (930 miles) east of Moscow, had just finished first period when a blinding light flashed through the windows of the building. Then, at about 9:20 a.m., a violent shockwave from an explosion shattered the glass.

"There was a very loud noise, similar to the roar of an airplane, and then a detonation and the shattering of glass," one of the school pupils told the Russian news website Lifenews.ru. "We've never seen anything like it in our lives. We had the feeling that something very large had landed in the neighboring courtyard." According to initial media reports, some 20 pupils in the school and in a neighboring kindergarten were injured.

What caused the windows in Chelyabinsk to shatter was documented in numerous videos and photos. A meteor pushed its way through the atmosphere on Friday morning and broke up some 30 to 50 kilometers above the Earth's surface before several piece crashed to the ground*. Across the region, people on their way to work became witnesses to the rare phenomenon. Numerous commuters filmed the meteorite, many of them more by chance than intent: Many Russians have installed video cameras, called dashcams, in their cars in order to help prove their innocence in the case of accidents or to document corrupt traffic cops.

Some of the footage, such as that from the airport in Yekaterinburg, shows the path of the meteorite from a distance along with its characteristic tail. But images from Chelyabinsk itself also show how the meteorite burst into a blinding fire-ball. The Russian Academy of Sciences said in a statement that it released the energy of several kilotons in the skies above Chelyabinsk.

Hundreds of calls from fearful residents flooded into local emergency services. According to Russian authorities, some 950 people were injured, with fully 750 of them in Chelyabinsk, population 1.1 million. Most of the injuries were from broken glass as the shockwave from the explosion burst windows across the city and in surrounding villages. City officials said that up to 3,000 buildings were damaged by the shockwave emitted by the detonation. A state of emergency was called in the city.

A zinc factory was particularly hard hit, with heavy damage to the roof and to factory walls. It looked, witnesses said, as though it had been struck by a bomb.

"The clear morning sky meant (the meteorite) could easily be observed," said Sergei Smirnov from the Pulkovo Observatory in St. Petersburg. He said it "was a relatively large object." Its weight has been estimated at 10 tons and entered the atmosphere travelling at an estimated speed of 54,000 kilometers per hour (33,000 mph).

Andrei Lukashev, a professor in Moscow, spoke of a "significant thermal explosion." He added, however, that the object was relatively small in comparison to other asteroids. Were a larger meteorite to strike the earth, he said, it could result in damage "worse than a nuclear explosion."

As soon as the initial shock from the event began to subside, the meteorite continued its journey through social networks such as the Facebook-clone Vkontakte.ru and Twitter. Some spoke of the "end of the world," noting that the chronically tardy Russian postal service only now delivered it instead of on Dec. 21 as planned. Also, an image of a shirtless Vladimir Putin riding the tail of the meteorite began making the rounds.

The gallows humor seems initially not to be as tasteless as it could have been. It looks as though Chelyabinsk barely escaped a much larger disaster.