The sign on the sports field reads: "Clean up after using." But there is no one to be found playing volleyball here on this Sunday morning, and no one is cleaning up either. The field is closed. Two American soldiers are staring at a pile of boards located behind red-and-white barricade tape. The wooden planks are stained with blood.

The site looked different on Saturday. The planks were part of stairs where people used to take coffee breaks. The sports field is surrounded by businesses -- there's the Mamma Mia pizzeria, the United Afghan Carpet company, Green Beans World Café -- and all were connected by a veranda. Just after 8 p.m., one of five rockets that had been fired by insurgents at the Kandahar NATO base struck its intended target. Several NATO soldiers and civilian workers were injured.

The missiles struck the ISAF troops in southern Afghanistan in precisely the place where the soldiers were seeking to forget about the war for a few minutes. The four other rockets only caused damage to property. Still, the headlines created by the third Taliban attack in the space of just a few days make uncomfortable reading for NATO. The Taliban, one general conceded, are showing, at the very least, that they are still around.

The insurgents attacked the airport at Kandahar just after sunset. The Kandahar Airfield is so big that it would take a quarter of an hour for a car to cross it from one end to the other. Around 25,000 soldiers live and work here. The base is the staging ground for the last attempt by the alliance to defeat the Taliban. The fresh soldiers being deployed by US President Barack Obama are sent into battle from here.

The tarmac is divided into zones, from A to Z. In Zone W for Whiskey, four airplanes are currently awaiting clearance for takeoff. Flight 073 to Kabul, a Hercules, is full. US solders sit shoulder to shoulder, squeezed into the cargo area of the dark green transport aircraft. Most have their eyes closed. The oppressive heat is only tolerable in body armour if you remain motionless.

War-Like Conditions on Base

It is around 8:45 p.m. when a soldier who is part of the crew on the Hercules hollers: "Is there anybody with ammunition on board?" Three soldiers who are carrying weapons stand up. Rumors circulate of a rocket attack by insurgents, and confirmation follows shortly. Through the loudspeakers over the tarmac, one can hear: "KAF is under ground attack -- take shelter in place -- force protection are dealing with the situation."

As the soldiers leave the Hercules and make their way to the bunker, the skies over the tarmac light up as if with fireworks. Six Apache attack helicopters are firing tracer bullets over Zone W, the thunder of an A-10 fighter jet can be heard and sirens are going off.

"Insurgents have fired on the camp with rockets," says one general. Later it will be reported that 12 ISAF troops were injured and three insurgents were shot as they tried to penetrate the base from the northern edge of the camp.

Meanwhile in the bunker, an interpretation of the attacks is already being discussed. People are saying that, the attack on Kandahar Airfield, the largest base in southern Afghanistan, wasn't so bad, relatively speaking. In other words, it wasn't very big, it wasn't planned very well and it wasn't as hard to stop as the attack conducted by a handful of suicide bombers against Bagram, the largest US base in Afghanistan, just four days earlier.

It took hours for the US Army to stop attackers at the perimeter of the gigantic Bagram base. Although none of the insurgents breached the perimeter, the skirmishes lasted from midnight to early morning and the Taliban managed to kill an American contractor.

The Taliban's Logistics Appear to Be Working

And on May 18, a suicide attack against a convoy in Kabul resulted in many deaths, including four high-ranking US officers. Two colonels and two lieutenant colonels, more or less the leadership of the US Mountain Warriors from Camp Julien, died in the attack. It had been a long time since the Taliban had succeeded in such a serious strike against the US Army.

The Taliban, which had largely been quiet in recent weeks, have made a formidable comeback. The most one had heard about them previously was that the US Army had detained a mid-range Taliban commander in the south, eliminated a weapons depot or that Afghan President Hamid Karzai had boldly repeated that he wanted to negotiate with the insurgents.

Western intelligence services share the assessment that the attack on Kandahar was largely symbolic. "Naturally this isn't about a group of fighters trying to capture a base with thousands of soldiers," says one NATO insider. "The attacks merely served to show their determination." With their three attacks on Kabul, Baghram and Kandahar, the insurgents certainly succeeded in doing that.

The detailed analysis of the two attacks that preceded the one in Kandahar are sobering. The intelligence services are assuming that a network of one of the most dangerous warlords in Afghanistan, the jihadist legend Jalaluddin Haqqani, dispatched a whole handful of teams of suicide attackers to Kabul to strike American targets. Three Pakistan nationals who had been arrested the day before the attack on the American convoy at the southern edge of the city, and who had hidden explosive vests in the trunk of their vehicle, confessed this after lengthy interrogations.

If the reports of their Afghan colleagues are true, then they provide evidence of the group's advanced logistical ability. The Haqqani network, which operates relatively freely from the area surrounding the eastern Afghan city of Khost, appears to have dispatched its teams to Kabul from all directions. None of the young Pakistani men knew what had been planned for them. They were first given their deadly instructions in one of the group's hideouts near the scene of the attack.

Summer 2010 Will Be Decisive

The developments must be especially troubling for the head of the NATO forces. US General Stanley McChrystal knows that summer 2010 will be decisive for his ambitious new strategy as well as his own career. At the very latest, President Obama wants to be able to show at least a small success by the end of the year. Other NATO partners are also under intense domestic political pressure to demonstrate progress in Afghanistan.

Steps toward that goal are expected soon. In the coming weeks, NATO wants to restore the authority of the Kabul government in the Taliban stronghold of Kandahar. But the insurgents have already announced their own offensive, too. If they follow up their threats with action, in the form of hard-to-prevent attacks like those conducted in recent days, then the situation could get very difficult for the alliance. It is hard to counter images of devastated streets with news of minor successes in the south.

For his part, McChrystal is not allowing himself to be influenced by the attacks. But while he may express optimism publicly, McChrystal's advisers are preparing for the inevitable: If the Taliban is under significant military pressure both in northern and southern Afghanistan, they are likely to switch tactics and carry out more symbolic attacks.

One day after the Kandahar incident, General McChrystal said that the "attacks were not operationally effective." He and his forces are preparing for possible further attacks in Kabul, a city that is by no means safe.

Attacks like those which took place last week will have to be prevented at all costs during the upcoming peace jirga at the beginning of June and also at the international Kabul Conference to be hosted by Karzai. Such attacks would not bring the Taliban a military victory -- but politically they would be a nightmare. 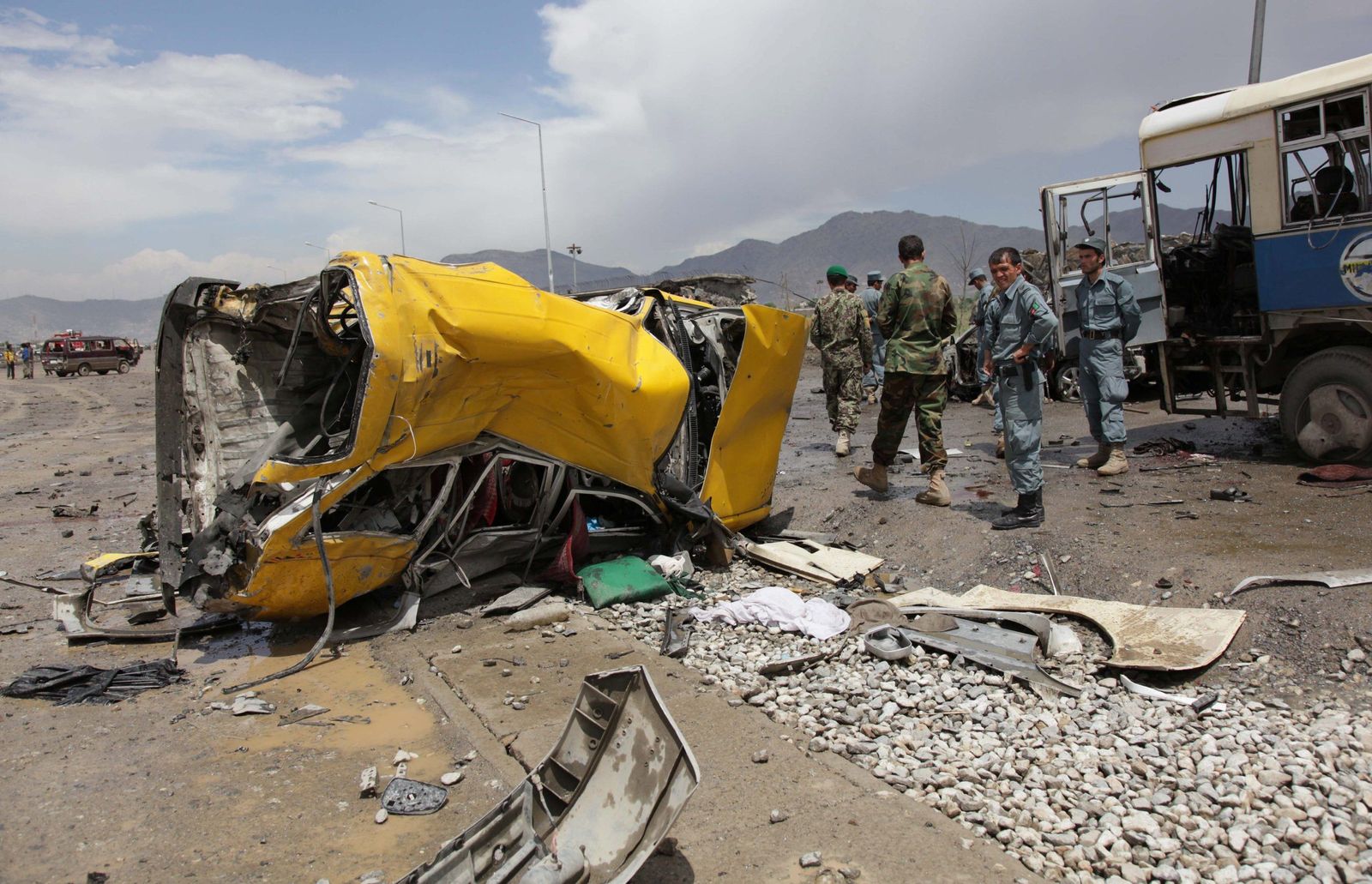 Four high-ranking NATO soldiers were killed in a bloody attack in Kabul on May 18.