It's nice to see the apostle is in a good mood. He looks spotless in his navy blue suit, with his gleaming silver shock of hair, and seems much younger than his 66 years -- looking -surprisingly good for having flown in from Tokyo the day before. And why shouldn't he be doing well? His church now comprises 120,000 members in Japan, he reports, and the number is rising -- not just in Japan but worldwide, from Mexico to Brazil, from Asia to Africa.

Dieter Uchtdof's voice has the soft lilt of Germany's lower Hessen region, tinged slightly with the English he speaks back in Salt Lake City. It's there that he feels at home, in the Church of Jesus Christ of Latter-day Saints -- the Mormons.

Uchtdorf has come to Frankfurt for a few days, to his church's European headquarters: a big, somber block near the city center. He sits in his old office and almost gets a little sentimental. Years ago, he was mission president of a stake of the Church -- "stake" being a Mormon term designating a group of several congregations.

Back then Uchtdorf was only a spiritual leader on the side -- he still worked his day job. He was a chief pilot for Lufthansa, and, at the end of his career, even a company executive. He still looks as if he were about to step into an Airbus -- with his suit, brilliant white shirt, and the perfectly matching tie. All that is missing are Lufthansa's trademark three golden stripes on the sleeve of his jacket.

Uchtdorf retired at 55. Originally, he wanted to go to Africa with his wife Harriet to do missionary work, he says. Proselytizing is part of every Mormon's life, a duty closely associated with the faith. But nothing came of it: His church had other plans for him. Step by step, it assigned him positions in various LDS bodies.

Now he is an apostle, one of 12 that direct this fast-growing church, along with its higher-ranked president. They are also the church's spiritual leaders. The Mormons take that literally: They view their apostles as prophets in the Biblical sense, as mouthpieces of God, just like in the New Testament. The reference to "Latter-day Saints" in the church's name signifies that its saints are direct successors to Jesus Christ. 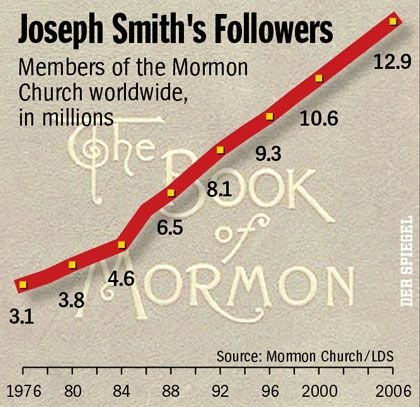 The number of Mormons in the world is on the rise.

Uchtdorf is unique in his church: He is the only one of the 12 apostles who is not a US citizen. "You're not elected but nominated to the position," he explains. Once nominated, he remains an apostle for the rest of his life, and only when one of the 12 dies is a new apostle appointed. The result, not surprisingly, is a rather advanced average age among the apostles. The president of the Mormons, Gordon Hinckley, is 97 years old but in perfect health, and most apostles are aged between 74 and 84. At age 66, Uchtdorf is the third-youngest.

Twelve Apostles and a President

Every apostle is a prophet with divine inspiration; each of them is in direct contact with God. But just to be safe, none of them is allowed to turn his own private inspirations into commandments for all the faithful. The 12 can only answer theological questions collectively. That includes the occasional decision to excommunicate Mormons who want to live the same way as 150 years ago: cut off from the outside world, with many wives providing them with numerous children.

Polygamy was officially banned by the church in 1890, but there are still a number of people belonging to breakaway sects who adhere to the practice. Joseph Smith himself, after all, had over 30 wives and preached the practice until the 1840s. Today, some of these bigoted eccentrics set up their own settlements in Colorado City, on the state border between Utah and Arizona, and have elevated themselves to the status of prophet. Their practices sometimes include incest, child abuse and sex with minors. And they regularly make headlines when yet another clan leader of some band of polygamists is taken to court.

These days, though, the headlines have been friendlier. Another Mormon is currently causing quite a stir; Mitt Romney, a Republican, wants to become the next US president -- a challenging task for anyone after the presidency of George W. Bush. Romney belongs to the Mormon elite, whose members can often be found in Washington: in Congress, as employees of various government ministries or as members of the Central Intelligence Agency (CIA). Romney made a fortune as an entrepreneur, saved the 2002 Winter Olympics in Salt Lake City from ruin and successfully ran for governor in ultra-liberal Massachusetts, of all places. His presidential ambitions seem like the next logical step.

But his political policies have so far been something of an afterthought in his campaign, with questions about his religion repeatedly confronting the candidate. What does it mean, US voters want to know, to be a Mormon, and what exactly will he do in the White House?

This denomination's history is full of oddities, and so Mormons like Romney are viewed partly with suspicion and partly with contempt -- especially by the established religious denominations, from Catholicism and Protestantism to the branches of Evangelicalism that exercise considerable power in the United States, including political power.

"We're only a small group, with 13 million people the world over," says Uchtdorf. But the church's wealth, the fact that it proselytizes on all continents and the secrecy with which it shrouds the rites celebrated in its temples add up to a sure-fire recipe for provoking suspicion.

A Pinch of Plato

The Mormons are a product of the 19th century, born mainly from the spirit of US Protestantism, and they are now the fourth-largest denomination in their country. There is nothing sophisticated or even intellectual about their faith. Mormons don't strive to harmonize faith and reason, like the pope, any more than they try to develop a theodicy, or a justification of God in the face of worldly misery, like entire armies of theologians from other faiths.

A pinch of Plato (all humans are spiritual beings even prior to birth) plus the Christian Sermon on the Mount and the capricious self-admiration of the first Mormon, Joseph Smith, who said that an angel had appeared to him and led him to a stone case with "golden plates" and ancient characters, which he was able to read using "prophet's spectacles" -- that's all the Church of Jesus Christ of Latter-day Saints expects the faithful to cope with.

The Mormons want their teachings to be that simple, which is why they don't have an elitist body of priests to develop elaborate interpretations of their faith. Theirs is a lay church. But the laypersons receive no money from the church: On the contrary, they donate a 10th of what they earn. Uchtdorf, for example, lives off his Lufthansa pension. And he says he has no right to a house or other comforts in Salt Lake City. At most, apostles like him receive compensation for their travel costs.

The prophets give the faithful advice on how to lead a god-fearing life, since the End, or Armageddon, is near. Mormons don't smoke or drink, and caffeine is likewise a no-no. To them, God is a flesh-and-blood being -- married of course. And Mormons that make it to heaven move there with the wife they married on Earth.

On the wall in one of the hallways of the Frankfurt headquarters hangs a painting called "Second Coming." Bathed in calm, soft colors, it shows Jesus as an athletic man with a center part and hair reaching far down his neck, like a 1970s pop icon. His arms are far outstretched, and he is accompanied by a host of female angels blowing trumpets like at the Last Judgement: Christ's resurrection for the salvation of humanity is imminent. Faith is rarely so simple.

But the Mormon Church is a church in motion. They are strong believers, and they seek expansion rather than an intensification of their piety. Mormons roam the world; still they like nothing more than the company of other Mormons. They withdraw into their temples, where non-Mormons are not allowed to enter. Why? "Because the temples are holy to us," says Uchtdorf.

And why such precaution? "We were persecuted, especially at the beginning. We were outlawed," the apostle says, referring to the period until the end of the 19th century, when Mormons roamed all over the United States, ostracized as persons who had strayed from the true faith. Joseph Smith, the first prophet, was shot in 1844. The Mormon pioneer trail found its own Rome in a valley by the banks of a salt lake, where the faithful laid the foundation stone for their largest and most important temple, a giant white granite construction in a city they named Salt Lake City.

But why are the Mormons so enormously popular today? Theirs is a "living faith," says Uchtdorf, and he smiles a winning smile. "Many things in life are represented in a complicated way, but our simplification of life down to its meaning makes sense to people."

Editors note: This article has been changed at the request of the Church of Latter-Day Saints to make clear that polygamists are not considered Mormons by the church.