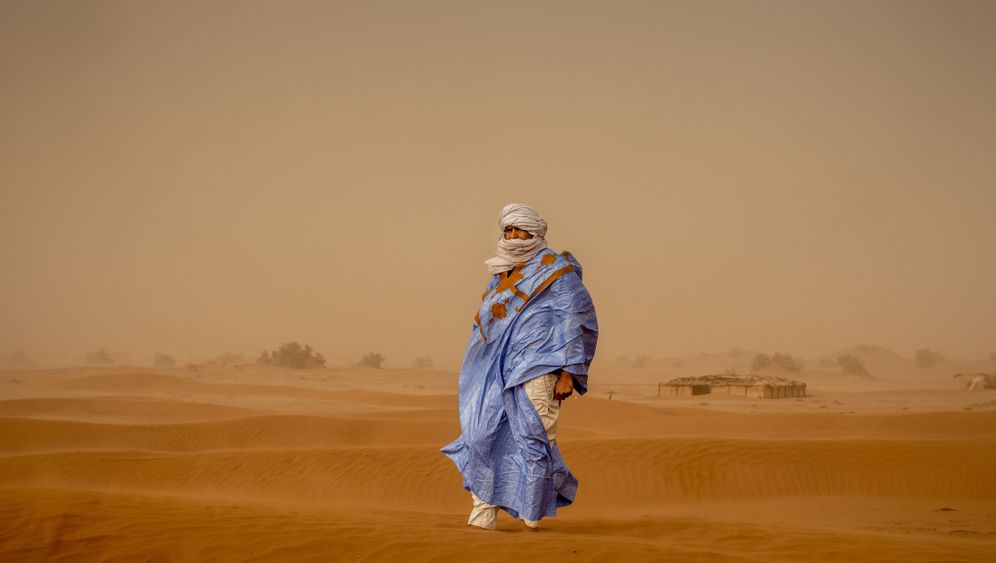 A sandstorm moves over the oasis town of M'Hamid El Ghizlane, coating buildings and streets with a fine yellowish coating that makes breathing more difficult and burns the eyes. Halim Sbai, 48, looks out at the remnants of the clay walls of his birth home on the edge of the oasis. "Whenever I'm here, the old and the new image of this place are superimposed on each other," he says. "It's then that I see the differences."

Before the rain stopped falling and the sandstorms grew stronger, palm trees used to grow in this oasis in southern Morocco. Date palms reached to the sky while pomegranate trees, wheat and watermelons grew in their shade -- so dense that Sbai had to fight his way through jungle-like vegetation when he wanted to swim in the Draa River near his home after it rained.

Today, he stands on a riverbed that the sun has burned to hardpan. Fronds still hang from a few palms, but the the trees no longer produce any dates, and some have withered to nothing more than a bare trunk. The oasis is dying along with them.

A Canary in the Coal Mine

Sbai's ancestors once defended the oasis against French colonial rulers and corrupt officials and Sbai now sees himself playing a similar role. But the enemy has become more diffuse, more threatening -- and far more difficult to fight.

Climate change is often said to be too big to grasp, the changes too subtle to be perceived. But the oasis city of M'Hamid El Ghizlane is a kind of canary in the coal mine -- an early warning system for the people in this region. It's already possible to observe here today what will soon threaten millions of people throughout the entire Mediterranean region, including Southern Europe.

Drinking water is disappearing. Unrest, sickness and poverty are driving people from their homes, and conflicts are escalating. As the European Union warned in its most recent report on climate change, some parts of humanity could be wiped out completely. Sbai knows the dangers. He's doggedly fighting for the oasis, planting palms and protecting their most valuable commodity: water.

"The oasis really is a paradise," he says, meaning the parts that are still green. For hundreds of kilometers between the Anti-Atlas Mountains and the Sahara, there's one oasis after the other. About 1.7 million Moroccans live in oases like M'Hamid El Ghizlane.

Like hundreds of thousands of farmers in past centuries, Sbai's father dug irrigation canals and planted date palms. The sale of the dates allowed for a modest level of prosperity. "I can still remember how the many trucks full of dates drove to the market in Marrakech," Sbai says. Every year, people celebrated their success after the harvest with a maussim, a festival honoring the local saint Sidi Khalil. For three days, people would eat food, play music and dance.

Sbai studied economics in Marrakesh, but never felt at home in the big city. In 1994, he returned to M'Hamid El Ghizlane, but the oasis was already dying. For years, the rains had grown increasingly unreliable, with the palms shriveling and the harvest shrinking as a result. Since 1994, the oasis has been producing so little that people have stopped celebrating maussim. At around the same time, though, tourists began pouring into the region. Sbai adapted to the changing times, founded a tourism office, bought several SUVs and opened a restaurant and a café.

Sbai walks through M'Hamid El Ghizlane. He passes a man on a donkey cart and crosses a dry riverbed. On the wayside, he greets a friend, Mohammed Laroussie. He wears a yellow turban, his back stooped, and works on a wheat field.

"I'm cutting down all the wheat," Laroussie says. "It is useless."

"What will you do with it?"

It has barely rained since November, and Laroussie hasn't collected a full harvest for years. Almost 40 percent of all Moroccans are farmers, and a large share of their fields are not artificially irrigated, meaning they are completely dependent on rain.

An Arid Region Gets Drier

The Mediterranean region is already one of the driest regions in the world. And it is getting even drier. In 2007 and 2008, Syria was hit by a horrific drought, with one-fifth of the population losing their livelihoods and over 40,000 families moving to metropolitan areas. Soon after, the civil war broke out. "Climate change puts pressure on natural resources," the World Bank wrote in one report, noting that "possible consequences include societal instability."

In the 1980s, the M'Hamid El Ghizlane oasis stretched across 37 square kilometers (9,000 acres). Today, only a third remains, with the rest having been buried under sand dunes. Meryem Tanarhte, a climate researcher at the Max Planck Institute in Mainz, Germany, and at the University of Casablanca, explains that the desertification "stems from ground erosion, rising temperatures and a lack of precipitation." A peer-reviewed article that Tanarhte also worked on predicts that the average summer temperature in the Maghreb region and in the Middle East will rise twice as much as the global average and that 10 times as many heat waves will strike the region than today. Even now, an increasing number of sandstorms are moving across the region. When the rain does fall, it often comes in heavy downpours and the parched ground absorbs water more slowly, causing flooding. In 2014, thousands of bridges were damaged in Morocco, there were power outages and 47 people died.

The World Health Organization predicts that, starting in 2030, there will be an additional 250,000 annual deaths around the world because of climate change, caused by growing malnourishment, malaria, diarrhea and heat stress. Over a half-billion people live in the Middle East and North Africa today, regions that Tanarhte warns could ultimately become uninhabitable.

El Bachir Laroussie, Mohammed's older brother, sits on a clay wall that surrounds his house and yard a few hundred meters down the road that Halim Sbai is walking on. Like Halim Sbai, he grew up in the oasis but later moved to Casablanca and worked in construction. He returned when his father fell ill. He waters the dates, peas and wheat in his garden with the help of a well. But it doesn't yield enough for him to live off it and he relies on financial support from his children, who like countless other rural inhabitants, also left the oasis to find work.

Morocco's population may have been growing for decades, but the oasis lost one-quarter of its population between 1982 and 2014. Today, two-thirds of all families in the M'Hamid El Ghizlane region depend on money sent to them from relatives living abroad. The majority of jobseekers remain in Morocco, but according to a 2018 survey, 36 percent of Moroccans are considering leaving the country -- including many who have set their sights on Europe. "In addition to the direct negative consequences of the water crisis, which affect nourishment, hygiene, reproductive health and general quality of life, indirect consequences, like work migration, inhibit the development of the region," argues a report produced by the North Rhine-Westphalia state Culture and Science Ministry.

Fighting to Save the Oasis

Sbai returns to the oasis, with sand dunes rising up before him like giant waves on the seaside. Even as a child, he says, he understood that it would take resolve to defend the green of the oasis against the desert wasteland.

Resolve, fight, front lines: Such is the vocabulary Sbai uses to describe his pursuit. In 2011, he joined a protest in Rabat. In 2016, he attended the UN Climate Change Conference in Marrakesh. And when hundreds of palms were cut down to make way for a new street through the oasis, he recorded videos with his mobile phone criticizing the local authority. Sbai knows that he needs allies in this conflict but that he can't give orders to anyone, so he's constantly persuading others to join him.

Together with his brother, Ibrahim, he organized a festival in 2009 in a desert camp, at which the Tuareg band Tinariwen performed. European scientists spoke with the farmers from the region about how the desert's advance could potentially be stopped. Students made drawings of how they imagined life in the oasis. Sbai encouraged visitors to strengthen the oasis against climate change, to donate money to plant date palms, which serve as protective walls against the desert. Although a sandstorm passed over the site, ripping away tents and destroying parts of the stage, 3,000 people from 30 countries took part in the event.

The following year, it rained so heavily in the days leading up to the festival that the bridge over the Draa became unpassable. It didn't discourage the Sbais and they paid for the lost revenues with money they earned from tourism. This past year, however, the two problems coincided: heavy rain and sandstorms. Visitors stayed away and the losses were huge. Halim Sbai had to sell more cars to pay off his debts and he decided to withdraw from the festival. But his brother intends to continue, though on a smaller scale.

It's not just the people of Morocco who are alarmed. The government in Rabat is also increasingly concerned about the issue of climate change. As early as 2011, it wrote environmental protection into its constitution and is building solar power plants, ultimately hoping to generate more than half its electricity through renewable energies by 2030. Between 2005 and 2010, the government spent one-tenth of its investment spending on adaptation measures. Rabat wants to build desalination plants and pipelines to transport drinking water to the south. Together with Gambia, Morocco is the only country currently meeting the CO2 targets laid out in the Paris Climate Convention.

The country's share of climate change, however, is negligible, and its CO2 savings don't make much of a difference globally. Particularly given that Germany, the European Union on the whole, China and the United States are not adhering to the Paris targets they set for themselves. The World Bank has predicted that if the world continues on its current path, the planet is likely to warm by 4 degrees Celsius by 2100, which would result in farmers in the Maghreb losing up to two-thirds of their harvest.

On a recent spring day, Halim Sbai welcomed guests to a regional tourism council meeting in the local administrative building. Hotel operators, tourist guides and all-terrain vehicle renters all sat down at a table. Some wore embroidered robes and turbans, others sweaters and jeans. Some French came, too. It resembled a United Nations climate conference -- almost everyone agreed that something needed to be done, but they disagreed about what they were going to do and how they were going to do it.

Some say that the oasis needs to be developed and that more tourists are needed for that to happen. Sbai's brother Mohammed just bought a hotel for 500,000 euros that looks like a fortress with a pool. "We just have to drill deeper and deeper wells," he says.

But Halim Sbai and others at the meeting argued that drilling wells below the ground-water level will only cause the oasis to die even faster. Their primary call is to protect the oasis -- anything else is of secondary importance. The dispute felt like a miniature version of the climate negotiations, in which some want to protect the planet while others are more concerned about the business community.

Whether the little bit that is left of the oasis M'Hamid El Ghizlane or indeed any of the oases will ultimately survive in the end is uncertain. 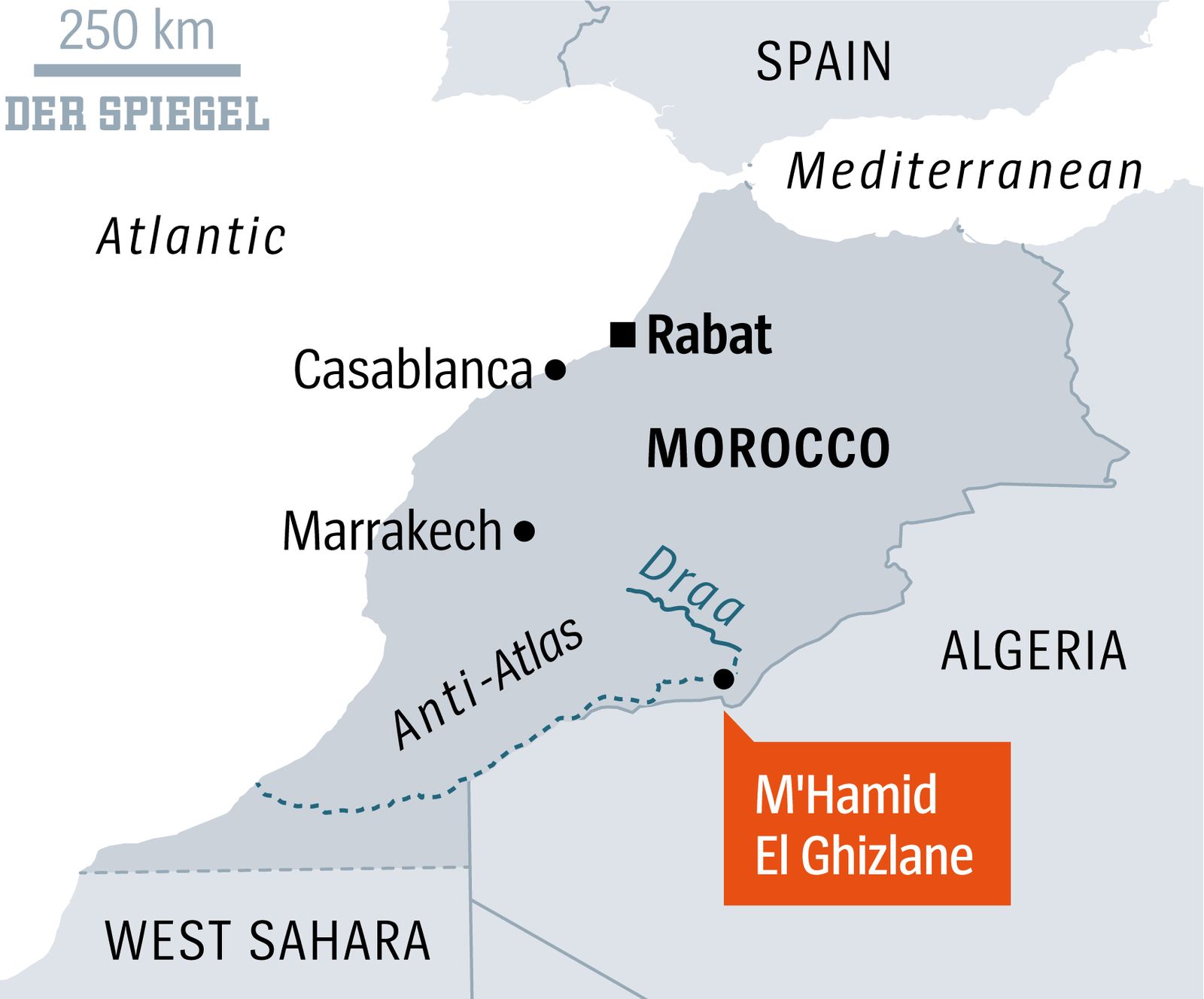