When an ultimatum is delivered following a murder, how is it possible to avoid escalation? That is the question currently plaguing leading politicians across much of the world. They are trying to figure out some way to turn the opaque situation surrounding Iran and its nuclear program to their advantage. And what surprises might still be coming.

The murder in question took place last Friday east of Tehran. It's not entirely clear how Mohsen Fakhrizadeh, thought to have been the most important nuclear scientist in Iran, was actually killed. He was apparently in his car on his way to visit his parents-in-law in Absard, located a 90-minute drive away from the capital. Iranian sources have disseminated contradictory versions of his assassination. One story claims that he was attacked by a dozen gunmen, while another alleges that he was fired on by a remote-controlled machine gun on the side of the road.

What is clear, though, is that Fakhrizadeh had been in danger for quite some time. He was apparently accompanied by bodyguards when he died.

There is no question that the attack was politically motivated. All indications point to the direct involvement of Israel, and it is quite possible that U.S. President Donald Trump had been informed beforehand. Two years ago, Israeli Prime Minister Benjamin Netanyahu stood in front of a picture of the nuclear scientist and said: "Remember that name, Fakhrizadeh."

With President-elect Joe Biden set to take over from Trump in January, there are many in Iran and Europe who are hoping that tensions will soon relax. Biden has made it clear that he intends to approach Tehran. But the murder of Fakhrizadeh could very well have dashed those hopes.

The decisive question is whether the Iran deal signed in 2015 still has a future. The key component of the deal, known formally as the Joint Comprehensive Plan of Action, was Iran's promise to freeze its nuclear program in exchange for a loosening of sanctions from treaty signatories, including Germany, and closer economic ties. Trump, though, backed out of the treaty two years ago and shifted to a policy of "maximum pressure," which has included even stricter sanctions. Since then, Europe has been almost desperately clinging to the deal, and Iran has likewise been more or less adhering to most of its provisions.

The ultimatum then came just a few days after the murder. On Wednesday, the Guardian Council in Tehran approved the law formulating the demand, which had previously been passed by parliament: If U.S. sanctions against Iranian oil companies and banks are not appreciably loosened by the beginning of February, then the inspections of nuclear facilities, as called for in the deal, will cease. Inspectors from the International Atomic Energy Agency would be forced to leave the country.

It wasn't difficult to figure out who the ultimatum was intended for: Joe Biden, who will be sworn in on Jan. 20 as the next U.S. president.

The new Iranian law also calls for the enrichment of uranium to be ramped up. The 2015 deal established a maximum enrichment of 3.67 percent, which is sufficient for the operation of a nuclear power plant. According to the IAEA, Iran is currently exceeding that threshold, if only marginally. At the same time, the country has accumulated 12 times more uranium than allowed. The new law calls for uranium enrichment to be increased to 20 percent. That would mean Iran would then be able to produce weapons-grade fissile material within just a few months.

When Iranian parliamentarians voted in favor of the law, calls of "Death to Israel!" and "Death to America!" rang out on the plenary floor. But Iranian President Hassan Rohani immediately expressed his opposition to the enactment. Widely considered to be a moderate, Rohani clearly indicated that he is not interested in escalation. "The government does not agree with this legislation and considers it damaging for diplomacy."

What next? Israel and Saudi Arabia have long been bitterly opposed to U.S.-Iran rapprochement, and for as long as Trump remains in office, he can pursue a scorched-earth policy to make things as difficult as possible for his successor. One key question is: How much provocation is Iran willing to accept?

For the Europeans, the Iran deal initially looked like a major foreign policy success. They were hoping it would bring stability to a region that had long been rife with crisis and chaos – and a bit of foreign trade. Germany, France and Britain were all key players in the negotiations that led to the deal.

The ultimatum from Tehran, though, has now kicked off the next round of negotiations. Europe, the U.S. and Iran have little choice but to keep talking.

Berlin sees itself as a mediator in the process that will, it hopes, result in a return to the initial deal. "Our services are needed, and they are welcome," says a government source in Berlin. Europe's role, the source says, is to lead the U.S. back to the agreement while also pushing Iran to adhere to all of the deal's requirements. "Complete compliance in exchange for complete compliance" is the goal. In other words, if Iran starts heeding the deal again, so too will the others.

It's unlikely that goal will be reached quickly. As such, Berlin has proposed a step-by-step approach. The plan calls for Biden to loosen sanctions as Iran verifiably reduces its nuclear activities. These steps could then provide the basis for talks aimed at a revival of the deal. Senior diplomats in Berlin share the U.S. view that the nuclear deal alone shouldn't be the target of the negotiations. Through its support of militias in Lebanon, Yemen and elsewhere, Iran is a source of instability, they say, and that has to change. Plus, they would like to see Iran's missile program cut back. German Foreign Minister Heiko Maas thus proposed a "nuclear agreement plus" in an interview with DER SPIEGEL published on Friday.

From the Iranian perspective, Europe doesn't have much to offer. "Only the Americans decide," says political science professor Nasser Hadian, who maintains excellent ties with high-level government officials in Tehran. "We have learned that the Europeans are irrelevant in this deal." He says the mood in the Iranian capital after the assassination is clear: "We are furious."

In Iran, there is a widespread feeling that the Europeans have promised a lot recently, but delivered very little. Their resistance to the strict U.S. sanction regime quickly collapsed, with German CEOs realizing just how high the price for continued trade with Iran would be once they were summoned for a meeting in the U.S. Embassy in Berlin.

Furthermore, European banks are hardly involved any longer in transferring money in and out of Tehran. "The Americans have undermined our national sovereignty and everybody is just standing around watching," says Helmut Gottlieb, head of Bank Melli Iran in Hamburg.

Wary of possible U.S. retaliation, Deutsche Telekom even cancelled Bank Melli's internet and telephone connection. The financial institution sued successfully in a regional court in Hamburg and the case is now at the European Court of Justice, with the potentially seminal ruling expected in spring. If Bank Melli wins its lawsuit against Deutsche Telekom, it could mean that other companies and banks in Europe will no longer be allowed to leave their Iranian business partners out in the cold.

Related Article
Germany's Foreign Minister on the Future of Trans-Atlantic Relations: "We Have Waited a Long Time for This" Interview Conducted by Christiane Hoffmann und Martin Knobbe

In Washington, there are competing views about a possible return to the Iran deal. The Trump camp, of course, is strictly opposed. Other Republicans can imagine a return to the deal under certain conditions. They don't just want to do something about the Iranian missile program and the Tehran-financed militias -- they are also demanding that the time limitations be removed and the deal be made permanent.

Biden, for his part, staked out a clear position during the campaign. "We urgently need to change course," he wrote in a September op-ed for CNN. "The bottom line is that Iran is closer to a nuclear bomb today than it was when Donald Trump took office."

For that reason, he wrote, "I will offer Tehran a credible path back to diplomacy." The first step must be Iran's "strict compliance with the nuclear deal," at which point, Biden continued, the U.S. would return to the deal "as a starting point for follow-on negotiations." Those talks, he made clear, would focus on a wide range of issues, including the release of imprisoned U.S. citizens and the war in Yemen. Biden's program is essentially similar to the idea of a "nuclear agreement plus," which German Foreign Minister Maas is seeking to introduce.

"Those who said you can't trust the Americans feel validated."

New York Times columnist Thomas Friedman asked Biden this week if he still intended to pursue his plan in the wake of the assassination of Fakhrizadeh. The president-elect's answer: "It's going to be hard, but yeah."

Still, the greatest amount of uncertainty when it comes to the current situation is to be found in Tehran. The country has a number of different power centers, and whether the parliament and Guardian Council get their way, or whether Rohani's government prevails will likely be up to Supreme Leader Ali Khamenei.

Plus, there is no shortage of bellicose rhetoric at the moment. "Eye for an Eye" read a recent headline in the conservative Iranian newspaper Kayhan, which recommended a retaliatory attack on the Israeli port city of Haifa. Hadia, the political scientist, says that if Biden doesn't fulfill the ultimatum issued by Iranian hardliners, they have promised a large-scale fight. "Nuclear, in space and regional: of a kind never seen before."

Still, the leadership in Tehran remained rather cool-headed during Trump's term in office. That seems unlikely to change now, with only a few weeks left of the Trump administration.

In the long term, though, the last several years could ultimately mark a turning point for the mood in Iran. The Iran expert Narges Bajoghli says that "the younger generation can now understand the anti-American stance of the revolutionaries." The country's economy has collapsed as a consequence of the sanctions, with both inflation and unemployment climbing rapidly. "Those who said the U.S. could never be trusted feel like they have been vindicated."

This attitude could play a role in the June 18 presidential elections in Iran. Rohani is not allowed to run again for re-election, and it's possible that Ayatollah Khamenei will give the incumbent space until then to negotiate a possible redo of the nuclear deal.

But the vote in June also means that if Joe Biden does not comply with the ultimatum that has been issued, he won't have much time to achieve his goal of a new deal. 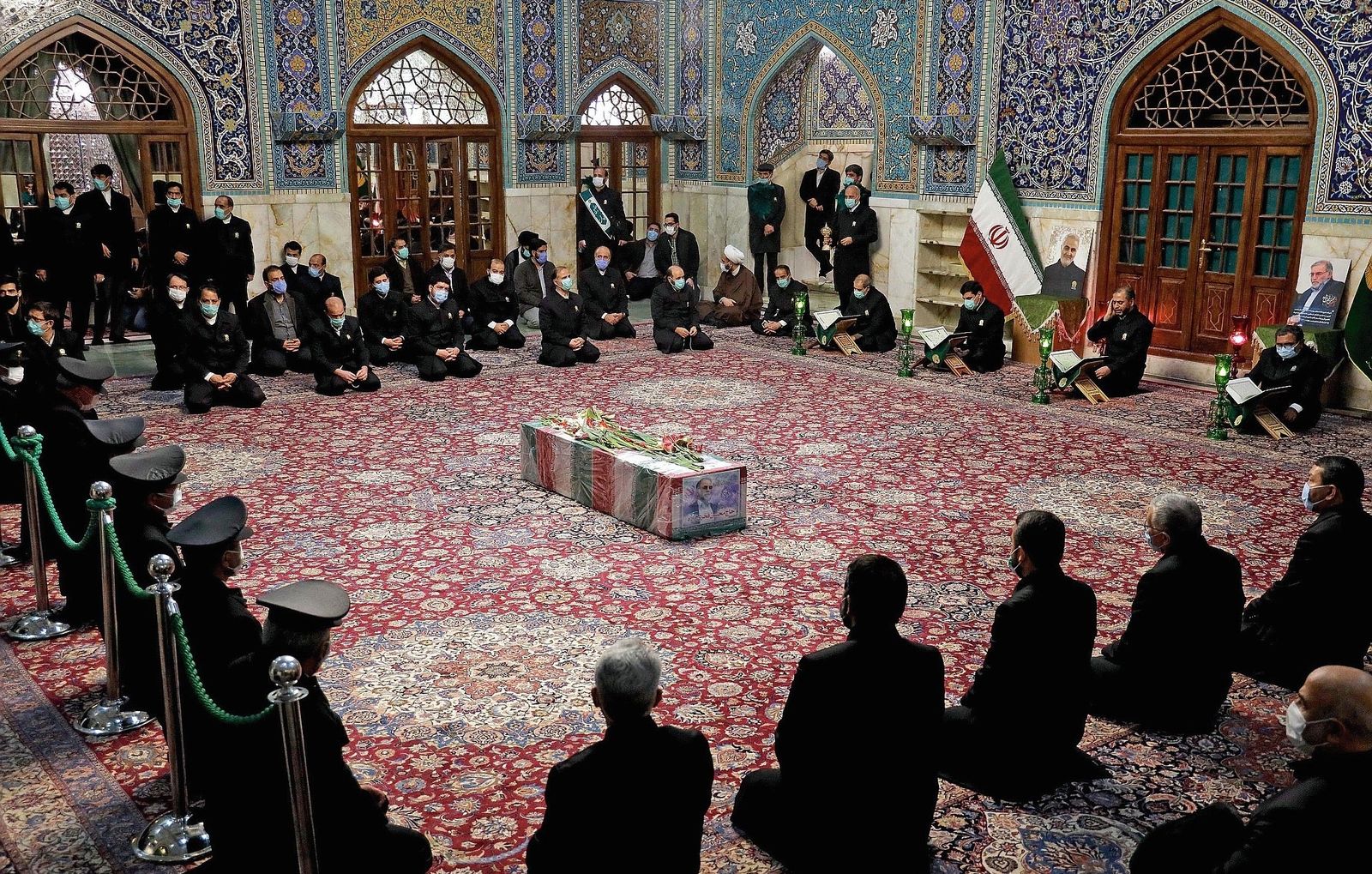 Mourners praying at the coffin of assassinated nuclear physicist Mohsen Fakhrizadeh: "We are furious." 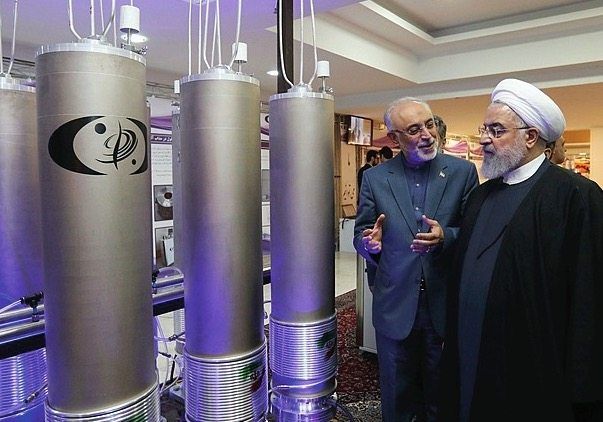