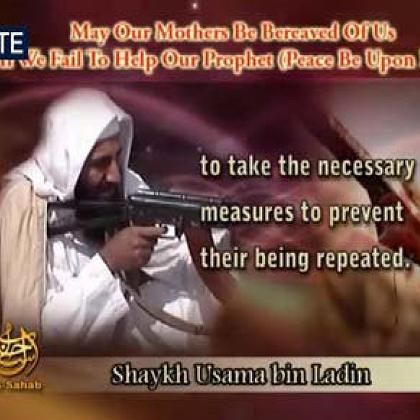 The address appeared on a Web site that has previously carried al-Qaida statements and was produced by the terrorist organization's media wing, al-Sahab. The announcement was timed to coincide with celebrations in the Muslim world to mark the Prophet's birthday.

In the five-minute message, a speaker believed to be bin Laden describes the cartoons as part of a "new crusade" against Islam in which Pope Benedict XVI played a prominent role.

"You went overboard in your unbelief and freed yourselves of the etiquettes of dispute and fighting and went to the extent of publishing these insulting drawings," proclaims the message, which is accompanied by an image of bin Laden holding an AK-47 assault rifle. "This is the greatest misfortune and the most dangerous and the judgment for it will be stronger."

The Muhammad caricatures were first published in September 2005 in the Danish newspaper Jyllands-Posten and sparked a wave of worldwide protests in 2006. Danish newspapers republished the cartoons -- one of which portrays Muhammad wearing a bomb-shaped turban -- on Feb. 13 to show their commitment to freedom of speech after police uncovered a plot to kill one of the artists, Kurt Westergaard.

Danish intelligence services said the reprinting of the cartoons had brought "negative attention" to Denmark and may have increased the risk to Danes at home and abroad. Westergaard has lived in hiding and under police protection since 2006.

Bin Laden said the publication of the cartoons was a graver offence than the "bombing of modest villages that collapsed over our women (and) children." "This is the bigger catastrophe and the more dangerous one and for which the punishment is graver," he said.

Adam Raisman, senior analyst at the Washington-based terror monitoring group the SITE Institute, told the Associated Press that, while the message coincides with an increased buzz in online jihadi forums calling for revenge on Europe over the cartoons, it did not specifically mention the republishing of the cartoons, only their initial publishing. The fifth anniversary of the beginning of the US invasion of Iraq on Thursday was also not mentioned.

"The tape doesn't give any specific evidence that would allow us to determine when it was recorded," Raisman said.