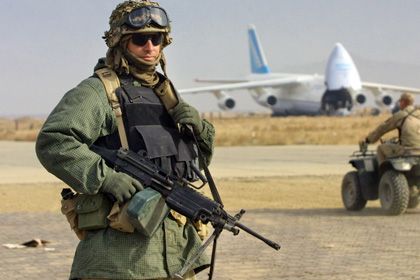 A US soldier stands guard on tarmac of Bagram airbase north of Kabul. The US military are holding a German citizen in Kabul on suspicion of terrorism.

The US military have been holding a German citizen in custody in Kabul since the beginning of the year over accusations that he was on a US base without authorization.

Gholam Ghaus Z., a 41-year-old of Afghan origin from Wuppertal in western Germany, had travelled to Kabul to visit relatives. When he entered a US military supermarket to buy a shaver in January he was arrested on suspicion of terrorism. The fact that he had banknotes in different currencies and telephone cards from several countries seemed to be enough to warrant his arrest. Although hours of interrogations did not provide any evidence that he was a terrorist, Z. man has been in US custody for the almost four months.

Officials with the Bundesnachrichtendienst (BND), Germany's foreign intelligence agency, have already questioned him in Kabul. Meanwhile Germany's domestic intelligence agency, the Office for the Protection of the Constitution, has looked into his background in Germany and found no grounds for suspicion. "It was all totally clean," a high-ranking security expert told SPIEGEL.

German agents and diplomats now fear a new Kurnaz case. The young German born Turk Murat Kurnaz spent almost five years in US military camps in Afghanistan and Guantanamo Bay, after being arrested on suspicion of being a member of the Taliban. He was eventually released in 2006.

Now the fate of Z. from Wuppertal is said to be straining relations between Berlin and Washington once again. The US officials are demanding that the German government provide "extensive guarantees" before they can let him go. According to a German security expert, this would be the equivalent to "complete surveillance," and is simply not possible.

At a meeting in March in Brussels US Secretary of State Condoleezza Rice assured German Foreign Minister Frank-Walter Steinmeier that she would look into the matter.

On Saturday a foreign ministry spokesman confirmed to the Associated Press that Steinmeier is in touch with his American colleagues about the matter and that he is making every effort to secure the man's release.

Meanwhile the German Federal Criminal Police (BKA) have said that two German Islamists who may be planning a terrorist attack in Afghanistan, could already be in Kabul.

Eric B. and Houssain al-M are thought to have links to the Sauerland terror cell, a group of three would-be terrorists arrested in Germany last September on suspicion of planning terror attacks in Germany.

The two men were last seen in the Pakistan city of Peshawar near the Afghan border at the beginning of April. Since then the BKA has received evidence that indicates that B. is in Kabul. The man wrote to his family from Peshawar that he would not be returning to Germany but instead would carry out his last mission in combat.