Prosaic, it is not: "The general command of the al-Qaida organization announces, after completion of consultations, that Sheikh Dr. Abu-Muhammad Ayman al-Zawahiri, may God guide him to success, has taken over command of the group." One and a half moths after the death of Osama bin Laden, the terror network once again has an official "amir," or leader.

The formal appointment of the surgeon from Egypt, who was born around 1952, is anything but a surprise: Zawahiri had been bin Laden's deputy for many years, and the group's internal structure always suggested that the second-in-command would take charge in the event of the death or capture of the leader. The only hurdle was a vote of confidence among members of the "general command."

That the approximately ten people believed to make up this exclusive body met in person to pass the baton on to Zawahiri is unlikely; they probably either voted over the Internet or let their messengers meet each other. Under bin Laden, the group's role was much less evident and it was rarely heard from. In the past six weeks, though, it has confirmed bin Laden's death and now appointed his successor, and the "general command" has made its central role within the network clear for all to see.

The development seems to hint that al-Qaida may be better organized than it often seems from the outside.

In any case, the decision announced on Thursday morning ends the debate over who would succeed bin Laden following his death at the hands of the American military. The three-page document, which SPIEGEL ONLINE has seen, is in all probability genuine. It appeared on hand-picked, al-Qaida-approved websites, and the content, form and language give no cause for doubt.

More interesting than the appointment itself is the question of how to interprete it. Is al-Qaida being reorganized under Ayman al-Zawahiri? And as the new "amir," will he be afforded the same degree of obedience as his predecessor?

Al-Zawahiri enjoys a lot of respect within al-Qaida and the wider circle of volunteers and active supporters -- above all simply because of how long he has been part of the jihadist camp. He was radicalized as a youth and became caught up in the pull of militant organizations who wanted to overthrow the Egyptian government. He is believed to have formed his first cell as a 16-year-old, and was imprisoned intermittently in Egypt.

Just like bin Laden, he joined the Afghan struggle against the Soviet invaders in the Hindu Kush, and just like the Saudi he did not return to his homeland afterwards. Instead the pair followed up the fight in Afghanistan with a new project based on a new idea: al-Qaida, a group of jihadists from various countries to carry the fight against the infidels and apostates around the world. Egyptians should no longer fight alone against the all-powerful regime in Cairo, Libyans against Libya, Syrians against Syria, And, instead, the United States, the supposed protector of the "godless" presidents and kings, would be attacked -- wherever possible, using whatever methods necessary.

A Leader with No Charisma

This ideological umbrella turned out to be extremely viable, and the rise of these ideas and the group behind them could be tracked from the first spectacular al-Qaida attack on American embassies in Africa in 1998 to the 9/11 atrocities. Ayman al-Zawahiri was there from the start as the second-in-command behind bin Laden. He was also affected by the retaliation: His wife Azza is believed to have been killed in a US air strike shortly after 9/11.

But respect is one thing, veneration another: Zawahiri, known mostly as "Sheikh Dr. Ayman," is a poor speaker, argumentative and a know-it-all, and unlike bin Laden, has only little charisma.

The question now will be how al-Qaida's members and supporters will accept the new "amir." No one will dispute his leadership, but it is conceivable that the offshoot al-Qaida in the Arabian Peninsula (AQAP) will maintain a more distant relationship with him than they did with bin Laden. There is a long-standing animosity between al-Qaida's Egyptian contingent and its members from Saudi Arabia and Yemen. There will not be a mutiny, but perhaps the implementation of directives from headquarters will be less forthcoming than before.

The second question concerns what Zawahiri's directives will look like. Will he try to reorganize al-Qaida?

In general, Zawahiri follows the same ideology and strategy as Osama bin Laden. But there are some admittedly vague indications that the terrorist network might try out a new strategy. These indications coincide with Zawahiri's takeover, but they would not likely be based solely on his decision.

A Kind of Terrorist Purity

It is striking that in both the al-Qaida statement from the general command and in a high-quality propaganda video released some weeks ago, there are calls to non-members to become active participants in the jihadist movement.

In the two-hour video, for example, viewers are presented with dozens of examples of such sole offenders, including from the 19th century. One man, one attack: Up till now, this has not been al-Qaida's official line. The terror network, whilst welcoming cooperation with volunteers of all kinds, has nevertheless insisted on a kind of terrorist purity: Only where al-Qaida itself was involved, should al-Qaida be mentioned.

The new message, however, could be understood as al-Qaida giving its blessing to individual attackers to carry out terror acts in the network's name. In general, it is better to make contact with al-Qaida first, the group's chief ideologist Abu Yahya al-Libi says in the propaganda video -- but if that is not possible, would-be terrorists should act on their own initiative. Sole attackers rather than cells: The thinking behind this idea could be that groups are easier to detect.

In the document released on Thursday there is a passage that seems to echo this approach: Al-Qaida extended its hands against all those who are also "working for the victory of Islam" -- in al-Qaida speech that means those planning terror attacks. It does not matter whether this is within or outside existing organizations, it adds.

Al-Qaida has also slightly shifted its position in another way: In the beginning, the terror network did not have a coherent message on the popular revolts in Arab countries. It lagged behind, the messages were out of date and sounded desperate, given the absence of any Islamist agitation in key places like Cairo, Tunis and Damascus.

But in the past week, Zawahiri -- even before he gained the role of "amir" -- released his own video in which he revealed the first attempt at a strategy in the face of the uprisings: Al-Qaida supports the rebellions against the "godless" regimes, but these movements must subsequently be transformed into a holy polity.

There is also an echo of this position in Thursday's statement: The revolutions are incomplete until Sharia, the Islamic legal system, is introduced.

What is clear is that Zawahiri is taking over the leadership at a difficult time: The pressure of being exposed is enormous, with CIA drones buzzing over not only Pakistan but also Yemen in their mission to eliminate al-Qaida forces. The network has not managed a spectacular attack on the West for years; instead, many members have been detected and killed or arrested.

Former comrades consider Zawahiri more intelligent and more strategically minded than bin Laden. Intelligence also suggests that Zawahiri has been the crucial figure in al-Qaida in previous years. In order to improve his standing, he will certainly think about ways to instigate a spectacular attack. It wouldn't be at any price because he is too cautious, but it would certainly be as soon as possible.

Zawahiri's whereabouts, meanwhile, are not known. Just like bin Laden, it has been believed that he was hiding in the Afghan-Pakistan border region -- but just like bin Laden, that could prove to be a misconception. In Zawahiri's case, at least, the suggestion that he lives in a cave has always been unlikely -- in one video, for example, an Arabic-language medical library can be seen sitting on a shelf on the wall. 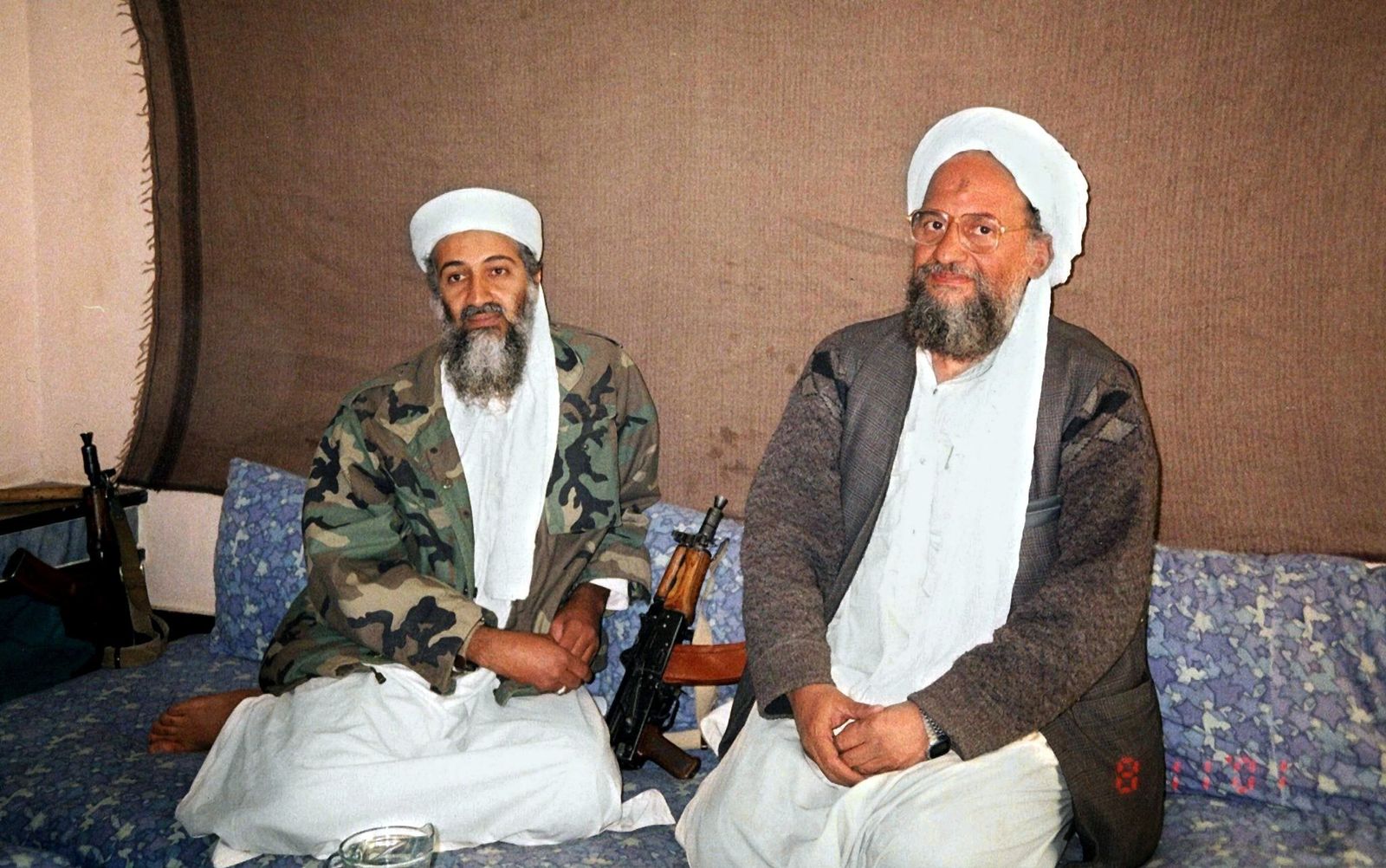