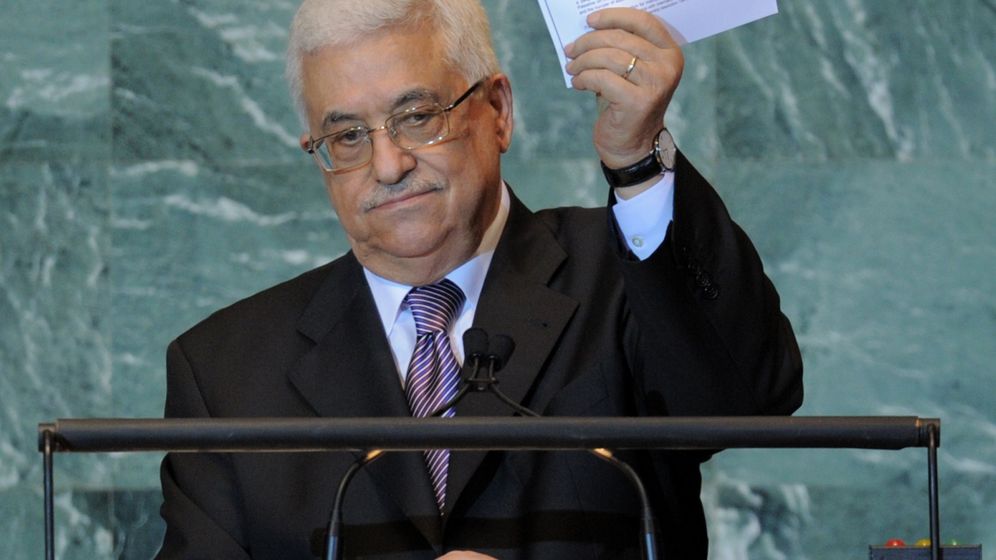 He kept the most dramatic statement for the end. "We have one goal," he said. "To be. And we will be."

With these prophetic words, Palestinian Authority President Mahmoud Abbas ended a 35-minute speech which will probably be seen as the highlight of his political career. Then, amid thundering applause from the delegates of the United Nations General Assembly in New York, he held up a copy of the application for recognition of an independent Palestinian state and for full membership of the United Nations which he had submitted to UN Secretary General Ban Ki-moon earlier. "I hope we shall not have to wait too long," said Abbas.

It is time, he said, that the Palestinian people attained their freedom and independence: "Enough, enough, enough." Earlier, Abbas had said that the "moment of truth" had come. "My people are waiting to hear the answer of the world."

Abbas' display of emotion ended a speech that had been sober in tone but clear in its intentions. Abbas had presented his view of the Middle East conflict to the world's representatives in New York in calm words and without overblown rhetoric. He described in detail the suffering of the Palestinians and the injustice they experienced because of the "colonial military occupation," especially the Israeli government's settlement policy. He explained how the Palestinian hopes for peace had been "shattered on the rock of the Israeli settlement expansion project."

Above all, however, Abbas stressed that the Palestinians' desire for self-determination was just and lawful. He concluded by saying that anyone who had "a shred of conscience" could no longer reject the Palestinians' bid for recognition of their state. Abbas did nothing less than appeal to the world's conscience. In return, he reaped great applause, with a majority of the delegates present giving him a standing ovation.

According to diplomats, the calculated delay could allow Israelis and Palestinians time to carry out negotiations on a peaceful solution again, without losing face. On Thursday, French President Nicolas Sarkozy revealed that there are already concrete plans for such negotiations under the auspices of the Mideast Quartet, which consists of the European Union, the UN, the US and Russia. The plan foresees the resumption of negotiations within a month, Sarkozy said. An agreement on borders and security should be reached within six months, with a final settlement being reached within a year.

In a statement released on Friday, the Quartet urged the two sides to resume direct negotiations without delay. "Within a month, there will be a preparatory meeting between the parties to agree an agenda and method of proceeding in the negotiation," the Quartet proposed.

But achieving peace within a year seems an ambitious goal. Then-US President George W. Bush tried the same thing with the so-called Annapolis process -- without success. The disappointment about all the fruitless negotiations drove the Palestinians to go it alone and inspired Abbas to appear before the UN plenary session.

The initiative marks the transition to a new tactic. The Palestinians are attempting to beat the Israelis at their own game, by seeking to win the struggle for public opinion through skillful PR work. A team of young Palestinians who grew up abroad have been working in Ramallah for weeks on the project "Palestine 194" (a reference to the fact that a Palestinian state would be the 194th member of the United Nations) and preparing Abbas' performance in New York.

Appearances before the plenary session of the United Nations are all about one thing: public perception. Not wanting to leave the stage to Abbas alone, Israeli Prime Minister Benjamin Netanyahu had announced in advance that he wanted to respond to the Palestinian leader's statement. The stage was set for a rhetorical duel which would do little to advance the peace process but would earn points for the winner.

In the end, Abbas was the clear winner of the hotly anticipated showdown. The Palestinian leader avoided rhetorical tricks and made a convincing impression as an honest representative of a just cause. In contrast, Netanyahu came across as arrogant and aggressive. Right at the beginning of his speech, the Israeli prime minister called the UN General Assembly a "theater of the absurd" that "for too long has been a place of darkness for my country." Netanyahu compared the United Nations to a "house of many lies."

He also made strong remarks aimed at Abbas and the Palestinians, claiming they had rejected or failed to respond to Israeli offers of peace. Netanyahu attacked Abbas' words about the "hopes and dreams" of the Palestinians, satirically recasting them as: "hopes, dreams and 10,000 missiles and Grad rockets supplied by Iran."

Former US Assistant Secretary of State Jamie Rubin told the news station CNN that Netanyahu would have been better off giving his speech to an Israeli "debating society." Indeed, Netanyahu did not shy away from transparent maneuvers for the sake of his audience back home. He submitted an offer of talks to Abbas that can only be described as flimsy. "Let's meet here today in the United Nations," he told Abbas. It's obvious that peace talks cannot be conducted in such a fashion, but the supposed offer gives Netanyahu ammunition. Next time, he can claim once again that he offered Abbas talks and he did not even deign to reply.

Whether the Palestinian initiative at the UN will give new impetus to the peace process is unclear. It is equally uncertain whether future negotiations will be successful in the end. But what is already clear is that Abbas has proved himself through a statesmanlike appearance that few would have thought him capable of. His team of young strategists has raised the Palestinians' game in terms of their political PR. They staged a showdown on the East River and laid a trap for Netanyahu that he promptly walked into. In his speech, he came across as stubborn and pigheaded -- and hurt Israel's image abroad. 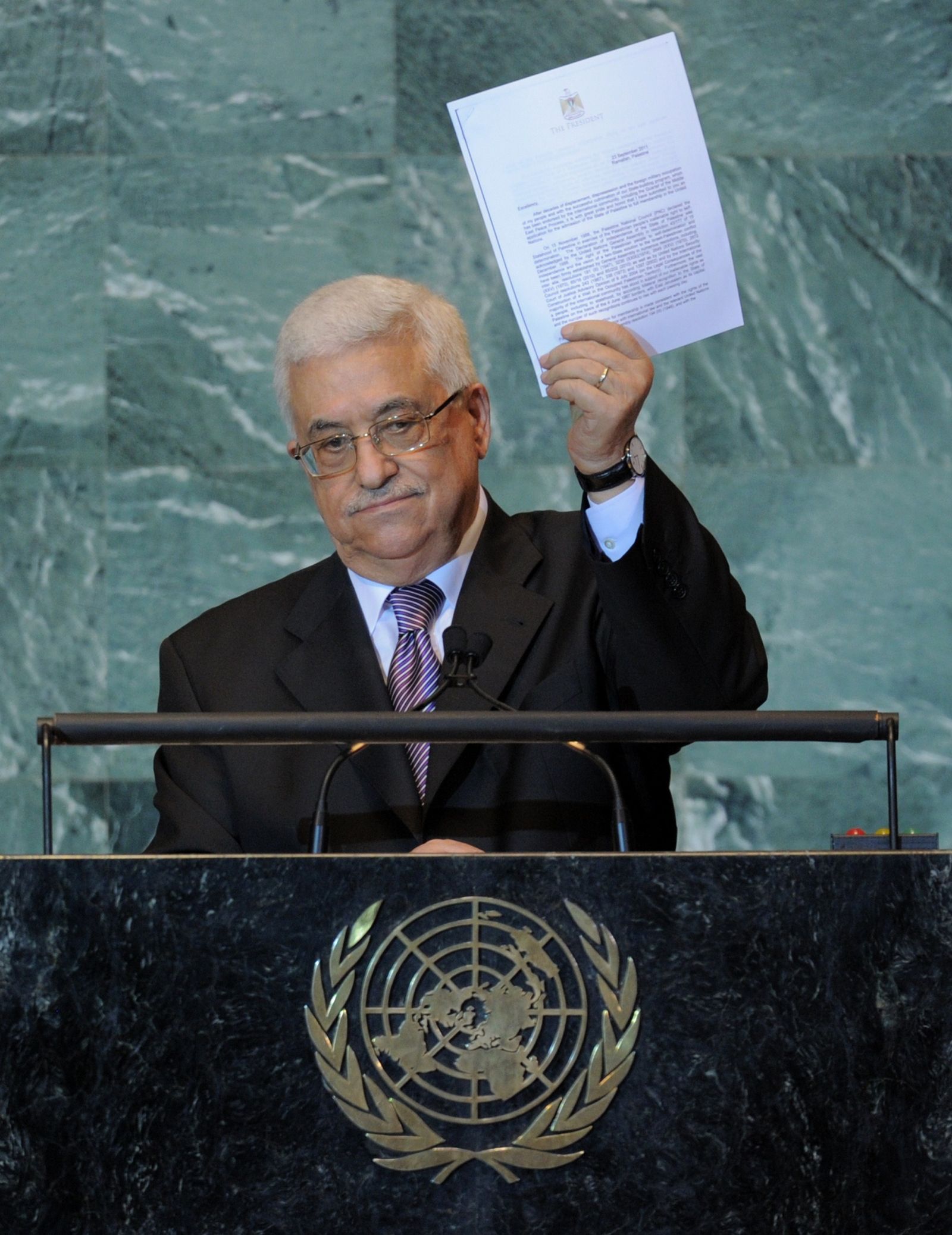 At the UN on Friday, Palestinian Authority President Mahmoud Abbas appealed for recognition of an independent Palestinian state in a statesmanlike speech. Here, Abbas holds up a copy of the letter requesting Palestinian statehood as he speaks during the United Nations General Assembly.