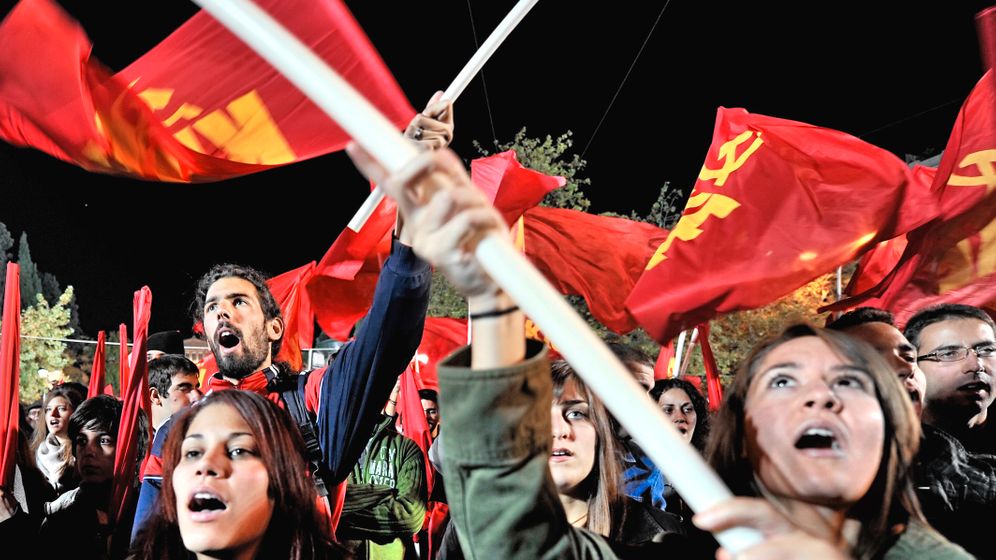 Alexis Tsipras walks up to the lectern like Elvis strutting onstage. But when he begins to speak, all traces of youthfulness and ease vanish from his face. The "foreign loan sharks" have one thing on their minds, he barks into the microphone: "the impoverishment of the Greek people and the sellout of our country!" He slams his fist down and continues his speech, his voice booming. The Europeans, he says, are pursuing only one goal: to bring about the end of the sovereign Greek nation. "We must prevent Greece from becoming a German protectorate once again," Tsipras says, practically shouting by now. "We are not a German colony."

The crowd applauds loudly in the packed gymnasium in Peristeri, a suburb of Athens. The words "The Left's Response in Greece" are written in bold letters on a banner on the wall behind the lectern. Tsipras, 37, wearing a black suit and a purple shirt, is the main speaker this evening.

It is cold and the room is unheated, but the will of the assembled crowd to wage resistance remains unbroken. They should be punished immediately, these European traitors, a man who looks to be about 60 hisses in the direction of the lectern. A female student is sitting next to him, and both are clapping enthusiastically.

Tsipras, the man with the harsh rhetoric, is the head of SYRIZA, or the Coalition of the Radical Left. According to the polls, he is currently the second-most popular Greek politician. Only Fotis Kouvelis, the chairman of the more moderate Democratic Left (DIMAR), is more popular than Tsipras.

A Country in Flux

There are many uncertainties in Greece today: whether the country can remain in the euro zone, whether the €130 billion ($171.8 billion) second bailout package will sufficiently reduce the insolvent country's staggering debt load, and whether the Greeks will ever implement the reforms their international creditors are demanding of them. At the moment, only one thing seems predictable: that nothing will remain the same. "Everything is changing, and everything is frightening," writes the newspaper Kathimerini.

Only with great difficulty was the transitional government of Prime Minister Lucas Papademos able to commit last week to the reforms that the European Union, the European Central Bank (ECB) and the International Monetary Fund (IMF) had demanded -- and its commitment came at a high political price. The nationalist right-wing Popular Orthodox Rally (LAOS) withdrew from the government, and the heads of the two large traditional parties, the Panhellenic Socialist Movement (PASOK) and the conservative Nea Dimokratia (ND), or New Democracy, saw 43 of their members resign or be expelled from their respective parties.

The lesson can be summed up with two words: "panta rhei," or everything flows. No political commentary these days describes the situation in Greece as clearly as these words from ancient Greece.

The political system is in its greatest turmoil since the end of the Greek military dictatorship in 1974. And the political establishment is in free fall.

According to surveys, the parties that benefit most from the crisis are those on the left, traditionally strong in Greece, which also include Tsipras's SYRIZA coalition.

Public Issue, a polling firm, estimates SYRIZA's approval rating at 12 percent, and that of Kouvelis's Democratic Left at 18 percent. The Communist Party of Greece (KKE), the oldest party in the country, stands at 12.5 percent approval. Combining the approval ratings of these three leftist parties would theoretically yield 42.5 percent, enough to form a government, even without PASOK, the socialist governing party of former Prime Minister Georgios Papandreou. Since winning the 2009 election with 43.9 percent of the vote, PASOK has now dropped to an 8-percent approval rating -- one of the biggest declines European election experts have ever seen.

Even if the pollsters say that the answers are changing more quickly than they can ask the questions, the trend is the same among all polls conducted by the major opinion research institutes: the two-party dominance of PASOK and ND, which have divided up the cabinet seats and perks for almost 40 years, is over. An election will be held in April, although the exact date has yet to be determined.

Nevertheless, it would be a mistake to think that a united left could win the next election and ensure a stable parliament starting in the late summer. The Greek left is deeply divided.

Standing Up for the Euro

"Coalitions are difficult," says Tsipras. An engineer who has been politically active since his school days and later became the leader of a radical student organization, Tsipras might be willing to form a coalition with the KKE, but he can't. Although the Communists, like his party, are opposed to the loan agreements with the troika, they also -- true to their latter-day Stalinist traditions -- want out of NATO, out of the EU and, of course, out of the euro zone.

Tsipras, on the other hand, wants to keep the euro. He wants "Greece to remain a systemic problem for Europe." He argues that this is the only way to ensure that the billions from the bailout packages are actually disbursed, and the only way to ensure that Europe, fearing the risk of contagion that would emanate from a Greek bankruptcy, will defer Greece's debts, or perhaps even forgive them one day. This is what Tsipras is betting on. It's a crude, extortionist way of thinking.

When Tsipras speaks, it sounds as if the mountain of debt had fallen on Greece by pure happenstance. He believes that the country's plight can be blamed on "international capital" and the "false Protestant principles of (German Chancellor) Angela Merkel." His recipe calls for more loans to stimulate growth, and he thinks the ECB should simply print more money to help Greece. Aside from a proposal to raise taxes on wealthy ship owners, Tsipras has no truly groundbreaking reforms to offer.

Tsipras's popularity with voters may have something to do with his stubbornness, his taste for polemics or his lack of self-criticism. But these traits also make him unacceptable as a coalition partner to another leftist, who is currently Greece's most popular politician.

The New King of the Hill

Fotis Kouvelis, 61, has a friendly but somewhat anxious expression on his face, as he sits, surrounded by leather-bound folios, in his Athens law office, 50 meters from the parliament building. A framed political cartoon of his face hangs on the wall behind him. He was Greece's justice minister for three months in the late 1980s.

According to polls, his Democratic Left is currently the country's second-strongest party, next to the conservative Nea Dimokratia party. The sudden popularity seems to make Kouvelis feel a little uncomfortable. Polls are polls, and nothing else, he says. He calls Tsipras's demands "unrealistic." The two men are old acquaintances. In 2008, they fought bitterly over the leadership of SYRIZA. Kouvelis lost the power struggle.

"The country must change," he says. He points out that reforms are not just important to reduce the country's debts, but are also vital to the cohesion of Greek society. Kouvelis wants to transform the new loan agreement, which his party also doesn't support, into a "growth plan" -- with the help of EU funds and the European Investment Bank. He wants the ECB to buy up Greek government bonds, and he wants the EU to be a little more patient with Greece.

He has no interest in launching into angry tirades against Merkel, but Germany still worries him. A German Europe isn't what is needed, and "German financial and economic hegemony" scares him, he says.

Kouvelis's party owes most of its success to the spectacular decline of PASOK and its chairman, Papandreou. The former prime minister and heir to an influential political dynasty still refuses to step down as party leader. The certainty that he will be the last Papandreou of a party nicknamed the Papandreou Party doesn't make saying goodbye any easier.

Turbulence on the Right

But the breakdown of established politics isn't just limited to PASOK. Almost more dramatic was the admission of complete failure that Antonis Samaras, head of the conservative ND, made last week. Samaras, who threw former Athens Mayor Dora Bakoyannis out of his party in May 2010 because she had voted for the first aid package, had now kicked 21 members of parliament out of the party -- because they voted against it.

His rivals aren't the only ones calling him a flip-flopper. If the polls are correct and the ND still has the support of roughly 30 percent of voters, it might even be enough for Samaras to fulfill his greatest wish and become prime minister in April. But Nea Dimokratia's showing in the election will hardly be sufficient to form a government on its own, and it probably won't even be enough to form a grand coalition with the greatly weakened PASOK.

Greece will only qualify for additional aid if the government in Athens, regardless of its makeup, accepts the conditions of a second bailout program. This is what the IMF and the EU are demanding. Neither Tsipras nor Kouvelis will be willing to consent to such a coalition agreement.

And now that the Popular Orthodox Rally (LAOS party) has deserted the transitional government, Samaras also cannot hope for coalition partners on the right.

According to recent polls, the ultra-right Hrisi Avgi party ("Golden Dawn") now stands a chance of surpassing the three-percent threshold to acquire seats in the new parliament. But the party would not be a viable coalition partner for Samaras.

The Golden Dawn fascists preach the "superiority of the white race and the Greek nation." Greece's prospects are bleak indeed.