Youssef M.'s daily routine has remained largely unchanged of late. Every day, the young Somali sits in a Hamburg courtroom, headphones firmly clamped to his ears, and listens attentively to a running translation of the proceedings against him.

Whether he is indeed guilty of the crimes he has been charged with seems beyond question. He belongs to a group of 10 Somalis caught by Dutch marines last April 5. The group tried to hijack a German cargo ship, the MV Taipan, but couldn't find the crew and were caught red-handed.

Nevertheless, the ongoing trial, which began last November, could have far-reaching implications for the future of ongoing efforts to stem rampant piracy off the coast of Somalia. With Kenya last year refusing to try any more Somali pirates on Europe's behalf, Hamburg jumped into the void -- and the ongoing proceedings may set a precedent for Western justice when it comes to robbery on the high seas.

But the trial has been full of absurdities. Not only has it been difficult to ascertain the defendants' ages, but the court is faced with thorny questions about how exactly German law should approach outlaws from a failed state.

'A New Social and Legal Order'

And it has been the defendants' lawyers' job to make those questions even more difficult to answer. "Youssef M. finds himself in a completely new social and legal order," his lawyer, Rainer Pohlen, said during proceedings on Monday. He argued that his client was 16 years old -- young enough to be considered for Hamburg's youth-welfare system. Pohlen then asked the prosecution to drop charges against Youssef and place him under state protection.

There, Pohlen argued, he might be able to learn German and vital job skills on the way to building a new life as a law-abiding immigrant. "He won't have to fight for his daily bread here," Pohlen argued. "He would have a completely different set of opportunities."

Hamburg state prosecutors, perhaps not surprisingly, refused to drop charges on Monday, arguing that court medical experts have put his age somewhat higher than 16. They also noted that some of the pirates -- no one is sure yet who -- opened fire on the Taipan's bridge as they chased the ship. "The captain had to fear for his life," state prosecutors said.

The 10 pirates attacked the Taipan last April about 580 nautical miles from the eastern coast of Somalia. By the time they boarded, Captain Dierk Eggers and his crew had disappeared into a hidden safe room. In the absence of a hostage situation, an elite squad of Dutch marines decided to storm the ship. No one died in the resulting gunfire, and the Dutch arrested the Somalis and freed the Taipan crew. It's considered one of the most successful counter-piracy operations since international navies started patrolling off the coast of Somalia in 2008.

Since then, though, the case has become decidedly less clear-cut. The Dutch insisted on extraditing the Somali prisoners to Germany, because the ship belonged to the Hamburg-based firm Komrowski. And in Hamburg, the pirates are being tried in a juvenile court, even though they're clearly not all juveniles. Just how old they really are, however, is impossible to ascertain with certainty. The Somali government collapsed 20 years ago and none of the pirates have birth certificates.

Youssef M. claims to be 16. Court-appointed medical experts, however, argue that he's closer to 18 or 19, based on dental examinations and skeletal X-rays. How the question is resolved will play a significant role when it comes to sentencing.

His personal circumstances might matter, too. Last week Youssef M. told the court that he was tricked into joining the pirate gang.

"I was born the youngest of eight children," in northeastern Somalia, he said, and lost his parents and half his family in accidents or acts of war -- two sisters killed by a grenade, a brother run over by a bus. "When I was nine or 10 years old, my brother brought me to the harbor, where I started to work odd jobs. Most of the work was loading or unloading ships."

'Have to Be Watched'

At 13, Youssef M. said, he worked as a night watchman for a fishing boat. "I received a wage of less than one US dollar per night," he said through his lawyer. "The situation in Somalia is such that almost anything that can be stolen, will be stolen. People live in great need, so fishing boats have to be watched."

A year later, in 2007, he became a fisherman. The work was hard and the pay was scarce, he said. "Many times I found work for days or even weeks, but sometimes there was no work for days, and I went hungry. When I had work, I could sleep on the boat. Otherwise I slept on the street," he said. "Overall the situation was very difficult."

In March 2010 a strange man came to him in the harbor where he worked and asked if Youssef wanted to pilot a boat. The work involved running a wooden motorboat as a shuttle for people and goods along the shore. "I worked several days as a sort of taxi driver on the sea," said Youssef, for the equivalent of two or three US dollars per day, which he considered good pay. By then he was already working in one of the skiffs that would attack the Taipan, he said. "Then the man asked if I was ready for a bigger job. It would pay a flat $500."

The Search for a Permanent Solution

He said no one went into detail about exactly what the job would entail. Strange men brought him out to a hijacked fishing dhow, where Youssef M. claims to have met the other alleged pirates in the courtroom for the first time. "It was only on board the dhow that I realized we were supposed to hijack a cargo ship," he said. "No one mentioned in my presence that there was a possibility of getting arrested by an international naval coalition."

"I did not think very hard about whether I should participate," he went on. "Nevertheless it seemed as if everything had been planned ahead of time and I had no choice. However, I was never threatened by anyone."

The statement read by his lawyer portrayed Youssef M. as a naïve follower who neither planned the attack nor fired a weapon. According to his statement -- which is impossible to confirm -- all he did was pilot the skiff.

"I want to say I'm very sorry for participating in this attack," he told the court last Wednesday. "I could only see the dimensions of the crime in retrospect.... The testimony by Captain Eggers impressed me deeply. That is why I apologized to him in court."

In December and January, the 69-year-old Taipan captain, Dierk Eggers, gave three days of testimony and described the hail of Kalashnikov fire that pierced the steel of the bridge "like butter" before he and two other crew members retreated to the safe room. The gunfire included one presumed round from a grenade launcher, he said, which didn't explode but flew in through one window and out another.

A Point of Apologizing

Eggers came across as a kind and experienced seaman, and at the end of his testimony Youssef M. made a point of apologizing.

So far two other pirates have told their stories in court. The plea for dismissal into the youth-welfare system by Youssef M.'s lawyer is an indication of how the various defense teams intend to proceed. Even if some defendants are found guilty, it's unclear whether Germany would ship them back to Somalia after a jail sentence. Somalia has lacked a formal government since 1991 and it is racked with civil war. Extreme poverty has motivated many on the Somali coast to turn to piracy.

A recent trial in the US of five Somalis who attacked a guided-missile frigate by mistake one night last April led to swift guilty verdicts last November. They face life sentences in jail. But they were tried in a military court, according to laws written over 200 years ago.

Western civilian courts are still trying to adjust to Somali piracy. In Germany the defendants face a maximum of 15 years in jail. But if the court points instead to expensive rehabilitation and, ultimately, to asylum, there will be little appetite here to try pirates at all. Indeed, Germany would prefer seeing the creation of a new international court designed specifically to prosecute pirates. Berlin has been advocating such a court ever since it launched a naval group to aid the European Union's counter-piracy mission, called Atalanta, in 2008.

"It needs to be an international authority," Germany's then-Defense Minister Franz Josef Jung said in November 2008. "No one wants a Guantanamo on the sea."

The provisional solution at the time was to fund special piracy courts in neighboring African countries like Kenya, since Somalia lacks a functioning judiciary. At first the plan seemed to work -- a Kenyan court funded by the United Nations and the EU has jailed dozens of Somali pirates. But rights groups have raised questions about prison conditions in Kenya, and one justice threw the whole project into question at the end of last year by ruling that Kenyan law cannot extend to international waters.

Meanwhile, high-seas crime continues. When Youssef M. apologized in court to Dierk Eggers, the captain said, "I accept the apology. In fact I've been ready to accept an apology for some time."

Eggers -- who says he bears no hate toward the pirates -- added later that the formal nature of Youssef's apology disappointed him. "Because he might have been killed too!" he told SPIEGEL ONLINE. "He was protected by the same guardian angel that seems to have watched over me.... I think he also could have apologized off the coast of Somalia." 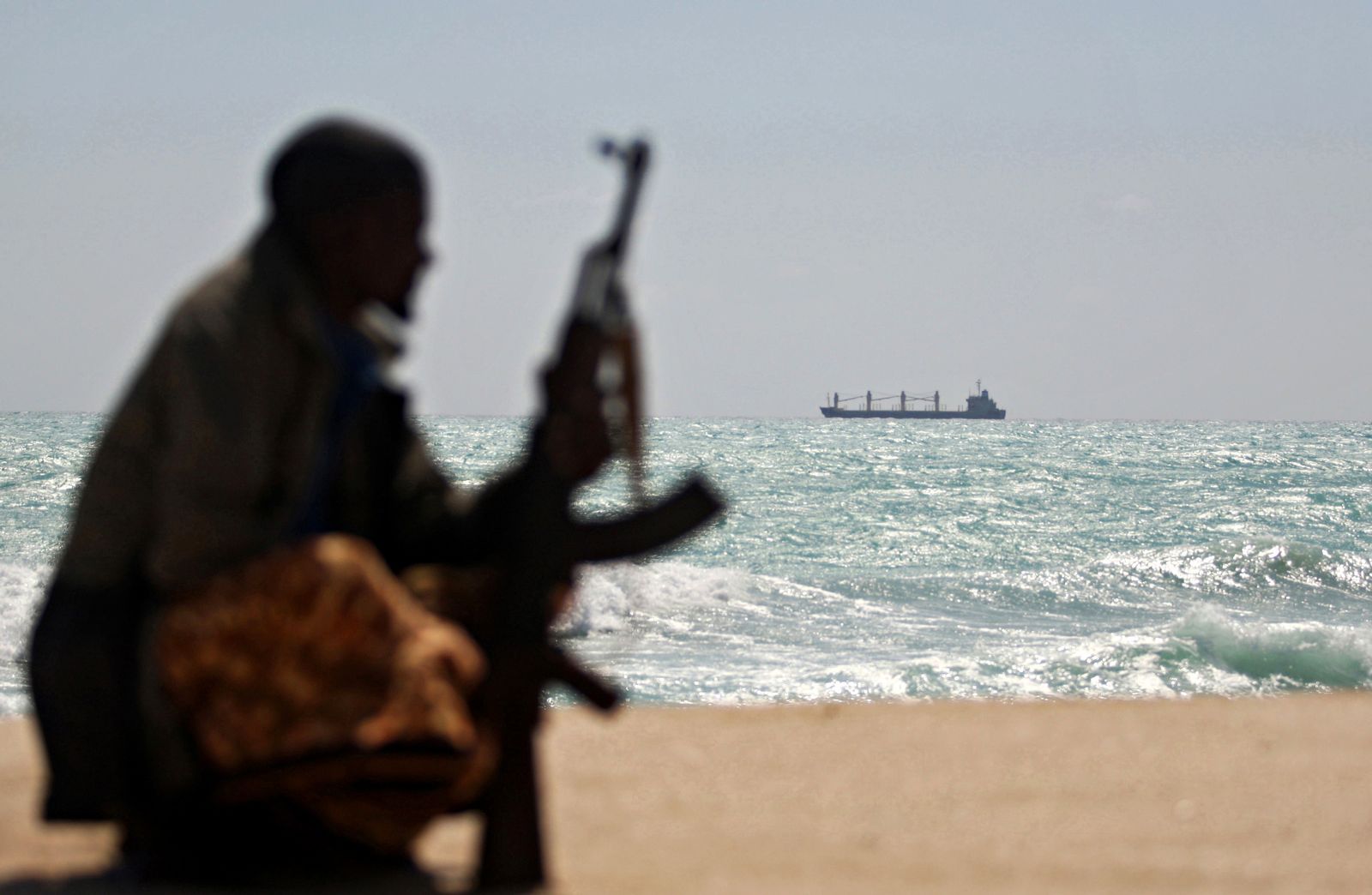 Piracy off the coast of Somalia has become a difficult problem for a court in Hamburg.