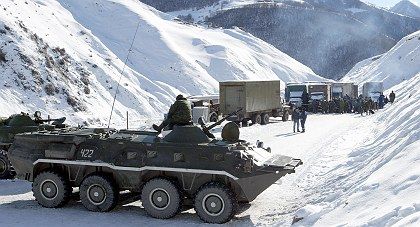 A Russian armoured personnel carrier watches trucks loaded with mandarines at the Russian-Georgian checkpoint of Nizhnyi Zaramag in North Ossetia. During the communist era, Abkhazia was a bountiful source of fruit for the Soviet Union and produced around 120,000 tons of citrus a year.

Russia is again warning against providing former Soviet satellite states Georgia and Ukraine with NATO membership. The attempt by the Americans to "force Georgia into the Western alliance is a provocation that could lead to bloodshed," warned Moscow's ambassador to NATO, Dimitri Rogozin, in an interview with SPIEGEL to be published on Monday.

Membership in the alliance would mean "Georgia's end as a sovereign state," Rogozin cautioned, because its renegade Abkhazia and South Ossetia regions, which have long been run by Moscow-aligned separatist leaders, would never join. "If Georgia became part of NATO, it would lose these regions forever."

Ukraine membership, he warned, also threatened to have dramatic consequences because he claimed the majority of the population was opposed to becoming a NATO partner. He warned that admitting Kiev would divide the country and destabilize Europe. Both Ukraine and Georgia are expected to strengthen their bids for membership at the upcoming NATO summit in Bucharest, Romania in April.

Rogozin also described American plans to build missile defense installations in Poland and the Czech Republic as an "unfriendly act," adding that if it happened, Russia would point nuclear weapons in the direction of the installations in both countries.

However, the ambassador did suggest unexpected preparedness for cooperation in Afghanistan. Russia, he said, plans to use the summit to "reach a number of very important agreements with its Western partners," aimed at fighting the Taliban and contributing to efforts to rebuild the country.

Check back for the full interview on SPIEGEL ONLINE on Monday.