It seems like an absurd idea that we are standing on a river right now. There is white in every single direction, only the sky above us is steel blue. At least today. There are days, though, when everything is white. These are the days when one cannot distinguish where the ground ends and the sky begins. That's what they call a whiteout around here. When it happens, there's nothing to stop the wind from whipping the snow over Greenland's ice shield and you can't even see your hands in front of your face.

Fortunately, there's no whiteout today. But you still can't recognize that this is a river. There are three reasons for this. First, it's so gigantic that you can't even grasp its dimensions - features like river banks are nowhere to be seen. Second, the river doesn't appear to flow at all. Third, the river water is frozen.

The river in question is called the Northeast Greenland Ice Stream (NEGIS). It starts approximately in the middle of the gigantic island and transports inconceivable amounts of ice for about 600 kilometers (373 miles) to the northeast into the sea. It reaches the ocean in the form of three glaciers - Nioghalvfjerdsbrae, Zachariae Isstrøm and Storstrømmen.

The movement of ice through NEGIS: Areas colored in blue and purple indicate particularly high velocities

Approximately 12 percent of Greenland's ice takes this path - and, as scientists have proven in recent years, the velocity of these flows is increasing. "The ice stream seems to be on the brink of a change," says Dorthe Dahl-Jensen of the University of Copenhagen.

Wrapped in a thick blue, down jacket with a fur collar, the silver-haired glaciologist has just stepped off a special plane. She's leading a field camp where scientists are about to research precisely this change. The project is called EastGRIP. In the name of science, a hole will be drilled through Greenland's 2.5-kilometer-thick (1.5 mile) ice shield. To execute the work, around 20 people are currently living right on the ice, at the 75th parallel north.

Video: Flying a Drone in Greenland

"It's the first time that anyone has attempted to drill a deep ice core in an ice stream," says Dahl-Jensen. The ice up here moves toward the sea at a rate of more than 50 meters (164 feet) per year. "That will certainly be a challenge," says the scientist.

It's hard to grasp the dimensions of Greenland's ice sheet, but it is possible to get your head around some key figures: The thick white layer extends over an area of 1.73 million square kilometers - or about five times the size of Germany. In some places, the ice is more than 3 kilometers thick. It has a total volume of 2.85 million cubic kilometers.

The latest report from the Intergovernmental Panel on Climate Change shows that global sea levels would rise by 7.4 meters (or almost 25 feet) if Greenland's entire ice sheet were to melt. By comparison: If all the world's mountain glaciers were to melt, they would lead to a sea level rise of only about 0.6 meters. To be clear, though: Greenland's ice shield will, of course, not disappear in its entirety anytime soon. That would take centuries and require significantly higher temperatures, says Dahl-Jensen.

Yet, there still is a significant problem: There is less and less ice in Greenland every year. And the melting process is accelerating. Using data collected by the German-American satellite Grace and the European Cryosat 2, scientists calculated an ice loss of 270 gigatons between 2003 and 2016. And that figure is per year. The ice loss increases by an average of approximately 17 tons each year. To put that into perspective: 320 gigatons of melted ice leads to an average sea level rise of 1 millimeter worldwide.

Currently, sea levels around the globe go up 3.2 millimeters (0.12 inches) on average each year. Depending on the calculation, Greenland is responsible for at least 0.5 millimeters per year. According to the data provided by Grace, however, that figure could also be as high as 0.74 millimeters. But how will this trend evolve? And what role will Greenland play in the future?

Half of Greenland's ice loss is caused by melting. The giant ice streams like NEGIS, where the EastGRIP drill camp is located, that flow from the ice cap toward the sea are responsible for the other half.

Video: Glaciologist Bruce Vaughn on the Situation in Greenland

Many ice streams have recently picked up speed - particularly the Jakobshavn Isbræ on Greenland's west coast. The glacier has doubled its speed since the turn of the millennium. Scientists find it difficult to grasp that there seems to be no speed limit on these motorways in the ice. "We don't know how to properly model the ice streams," says Dahl-Jensen.

What seems to be clear, however, is that the flow of the Northeast Greenland Ice Stream is also accellerating. One of its outlets, the Nioghalvfjerdsbrae glacier, is getting faster - at least in the summer months. Another, the Zachariae Isstrøm glacier, has been accellerating year-round for some time now.

The global sea level would rise by 1 meter if both glaciers were to disappear completely. This is obviously a theoretical value given that melting would take place over centuries. But it is also clear that the increased ice loss in northeastern Greenland is worrying scientists. Until very recently, the region was believed to be stable.

In order to see the place where Greenland's ice is being drilled, you have to go underground after leaving the plane. A ramp leads down into the white, with snow crunching under one's shoes. The drill hole starts not at the surface of the ice but 7 meters below in a tunnel, which they call a trench here.

Panorama Photo: The Drill Camp on the Ice

That's why the drill cores must be kept beneath the surface. This is also the domain of Sepp Kipfstuhl, a scientist with Germany's Alfred Wegener Institute in Bremerhaven. Kipfstuhl, a 65-year-old who hails from Bavaria, has spent countless summers and winters in the Arctic and the Antarctic. This time around, he's at EastGRIP.

Today, the drill is standing still. But here's how it usually works: The scientists bore into the ice in increments of 2 meters -- thus traveling back to the climatic archives of days long passed. Slowly, the drill core is pulled up. First it is split into 1.65 meter pieces and later into 55 centimeter sections. "We have five to six years (of climatic records) per meter," says Kipfstuhl.

In a specially cooled section of the trench -- and at -30 down here, it is indeed extremely cold -- the drill cores are cut with a buzz saw and then packed into plastic bags. They are temporarily stored on a wooden rack in the ice cave located next door.

Scientists can only work at the EastGRIP camp from the end of April to August. So far, the drill has reached a depth of 300 meters. Next summer, the scientists are hoping to reach the rock bottom beneath the 2.5 kilomters of ice. At that point, they want to measure how quickly the ice is moving at its deepest levels.

Chapter 3: Life Isn't as Bad as You Might Expect

"The dome," a black structure, is the centerpiece of the EastGRIP camp. There's a table football board set up on the first floor. Sometimes people watch movies up here, and they even streamed the final of the Champions League football tournament. Every Saturday night, the camp's inhabitants gather for dinner together, opting for casual clothes instead of their usual working garb for a change. They only get half a day off each week, and this is the start of it.

On the one hand, there's less privation to working on the ice than one might think. It's not like the people here are just surviving off canned food. When planes fly in to bring supplies, they often deliver fresh fruit and vegetables to camp residents. Still, the icy cold makes this a tough job -- one that is challenging on the body. It's also a very isolated place: The nearest human neighbors, inhabitants of the Summit research station, live some 350 kilometers away.

After a long day outside, the "dome" is where the scientists socialize. They shower here and get in touch with friends and family through a surprisingly fast satellite internet connection. Most importantly, this is the place where they come to get warm. The room temperature is kept at a comfortable 20 degrees Celsius, but outside it can easily be 40 degrees cooler than that. At -6 degrees Celsius outside, today's actually a pretty warm day.

How does the ice move at a depth of several hundred meters? A microscope can help to answer that question. Ilka Weikusat, a glaciologist at the Alfred Wegener Institute, uses one to investigate razor-thin slices of ice, each 0.3 millimeters thick.

Weikusat compares an ice core to a deck of playing cards. Not much happens when one applies pressure from above. But when one pushes from the side, things start to move. That's what happens in an ice stream.

Weikusat examines the orientation of crystals in the core sample under a petrographic microscope. "The orientation of the crystals can teach us the depth at which the ice stream starts to move," she explains. She has only just begun her analysis. The ice crystals from the upper part of the ice core are still chaotic. The image of Weikusat's microscope is thus quite colorful. But this will change at some point. Then the scientists will know where, exactly, the frozen river picks up speed on its way to the sea -- and how the ice is deformed in the process.

here's only one way for scientists and equipment to get to the ice camp: on board a Lockheed LC-130 Hercules aircraft. There are only 10 of these gray airplanes with bright orange marks on their tails in the whole world, and some are are over 40 years old.

The four turboprop engines are operated by the New York Air National Guard. They can land on wheels like virtually any other aircraft in the world. Or they can deploy three massive skis, two are 5 meters long, and the third, in the front, is 3 meters long. And that is what sets these airplanes apart. The skis allow the machines to land on the ice of both the Arctic and the Antarctic.

Video: Flying Over Greenland in an LC-130

The runway for the planes at the EastGRIP camp is 3 kilometers long. That may sound quite long, but it is in fact misleading. When it is too warm, when snow and ice get sticky, the planes need additional thrust in the thin air 2,700 meters above sea level. Pilots can get this little bit of extra boost by firing eight little rockets. These "Jatos" date back to the Korean War and can be attached on the sides of the plane. Each set provides 15 seconds of propulsion.

But today the crew has left the rockets at the base where we took off from, the Kangerlussuaq airport on the coast. And we are paying the price as we attempt to take off. The snow on the runway is far too soft and the plane too heavy. Again and again the pilot, Lieutenant Colonel David Panzera, speeds up the aircraft. And again and again the plane is too slow to take off. He instructs his two loadmasters to remove as much cargo as possible from the plane. It will be taken care of some other time. One take off attempt after another fails. It is only at the ninth attempt that the plane finally manages to lift off the ground.

In three weeks, the LC-130 will be back. It will be carrying new scientists, new scientific equipment and fresh supplies to a camp that will have moved a little bit further toward the coast on that huge river of ice. 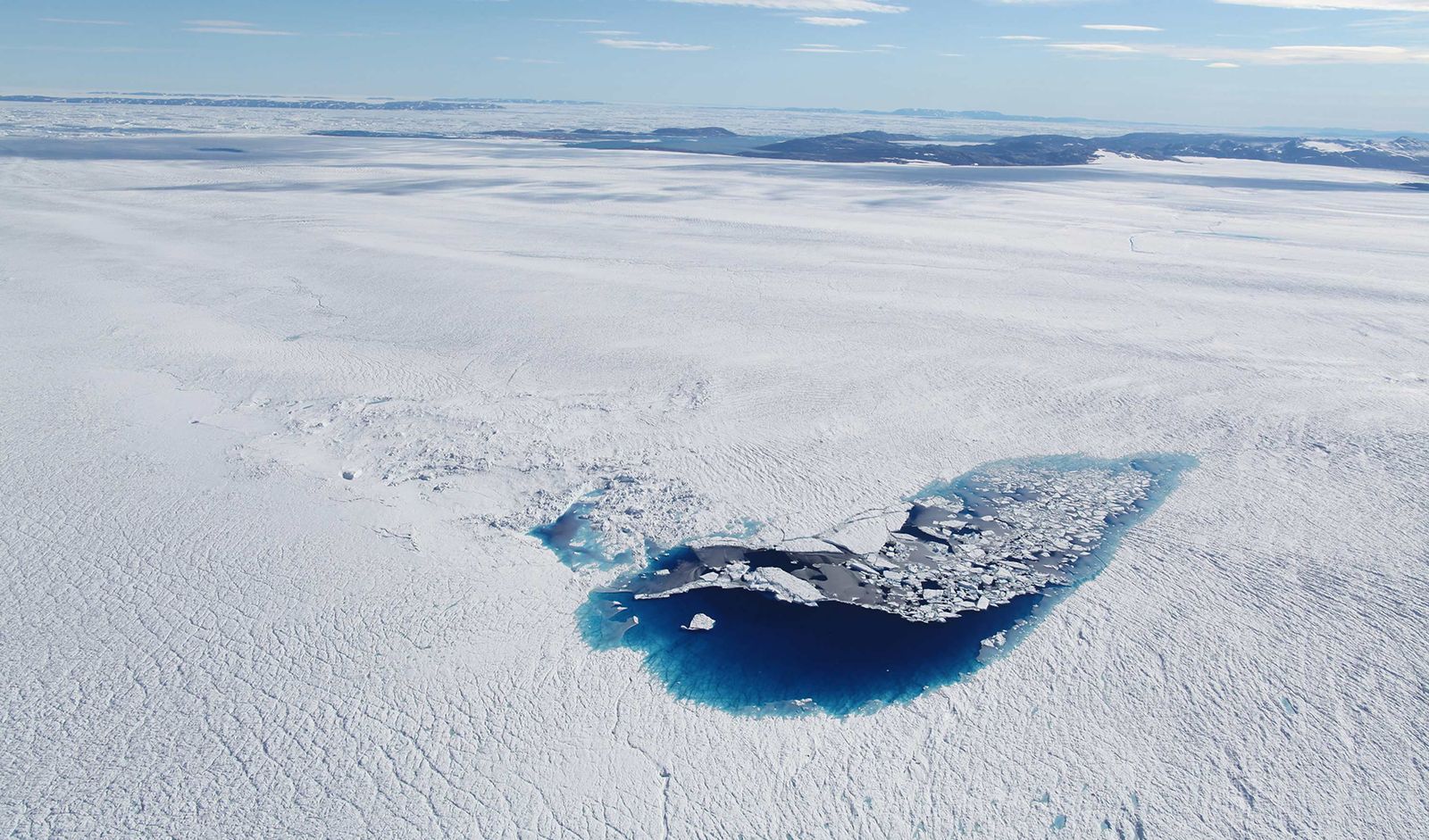 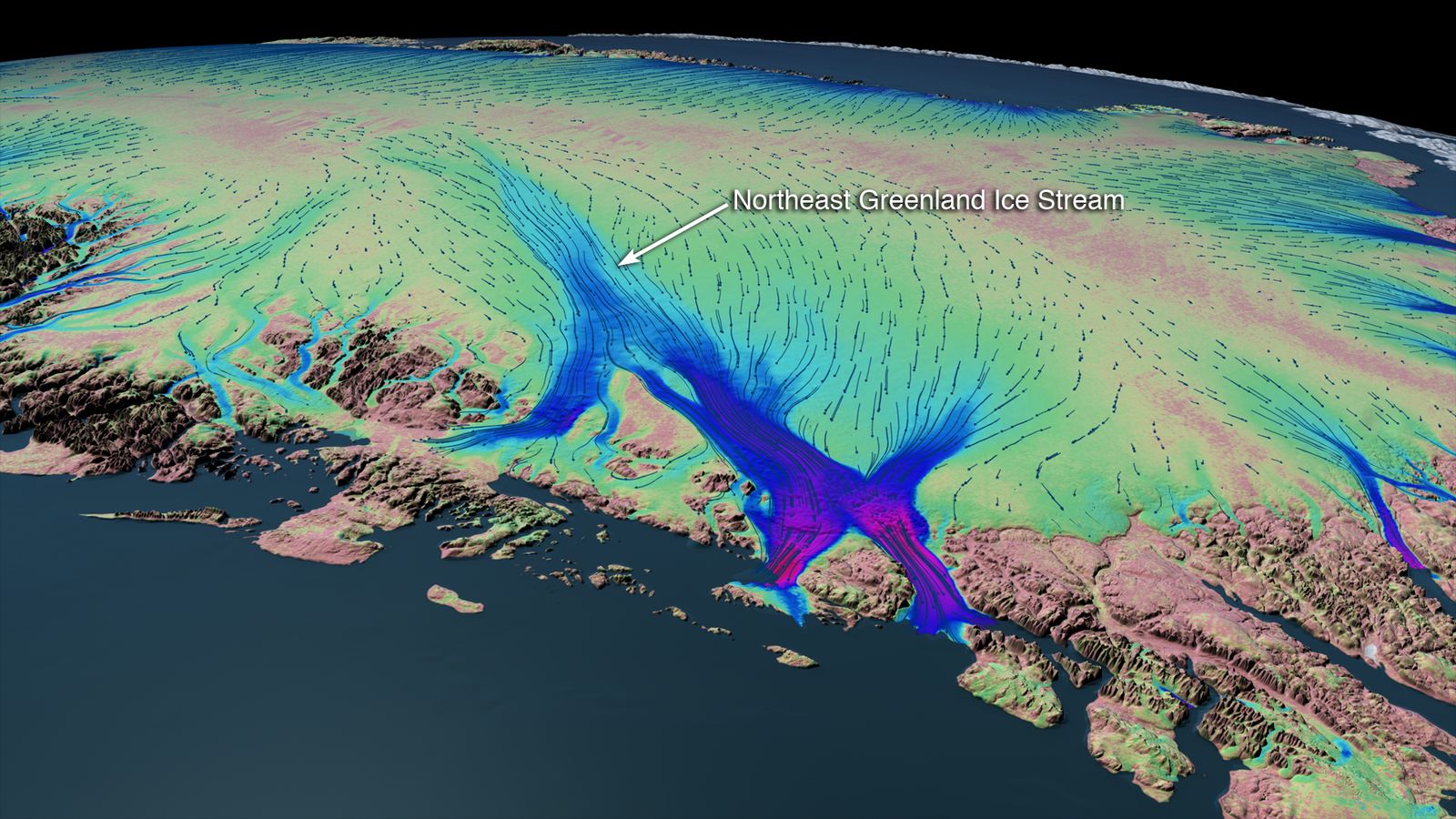 The movement of ice through NEGIS: Areas colored in blue and purple indicate particularly high velocities 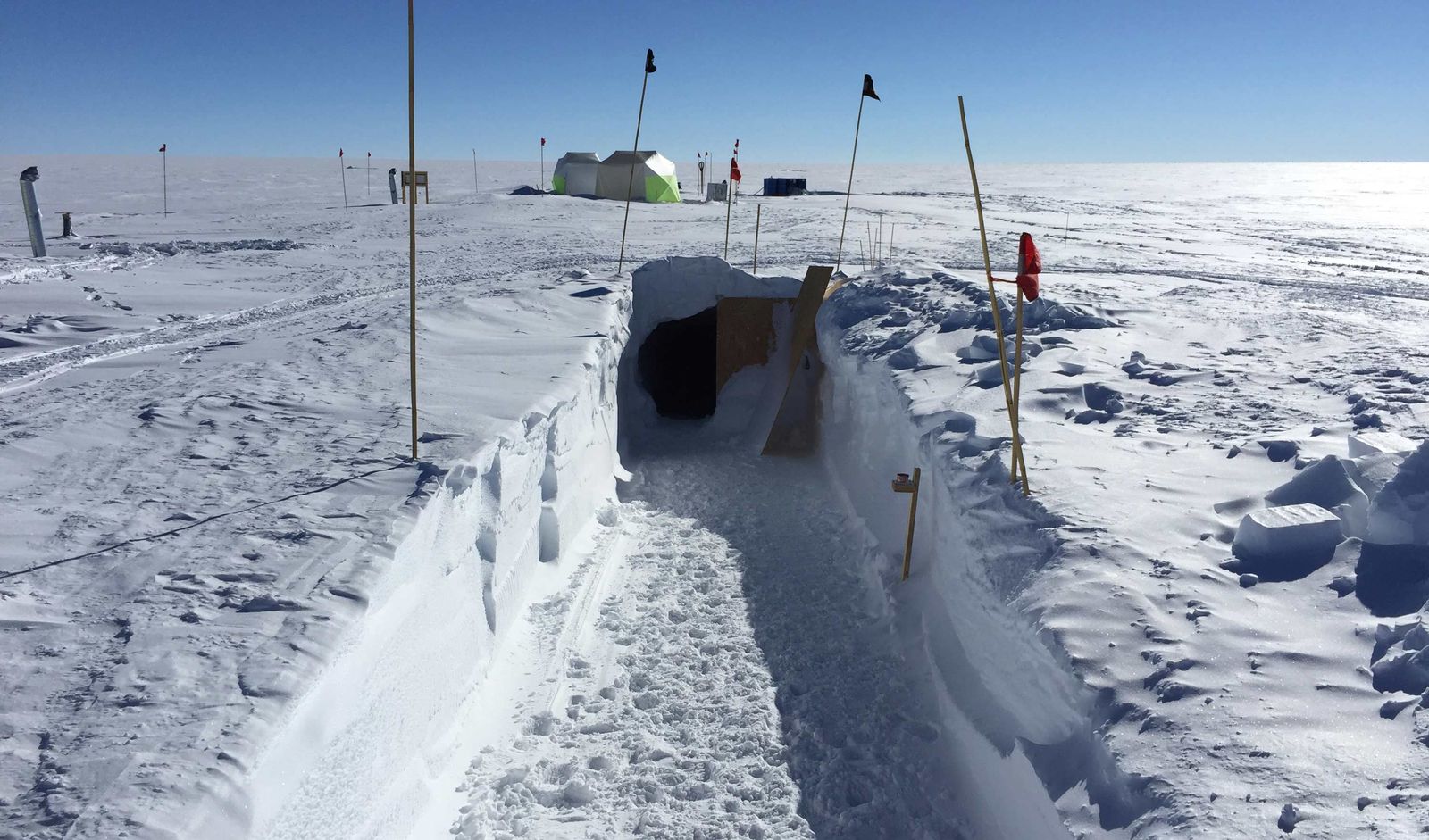 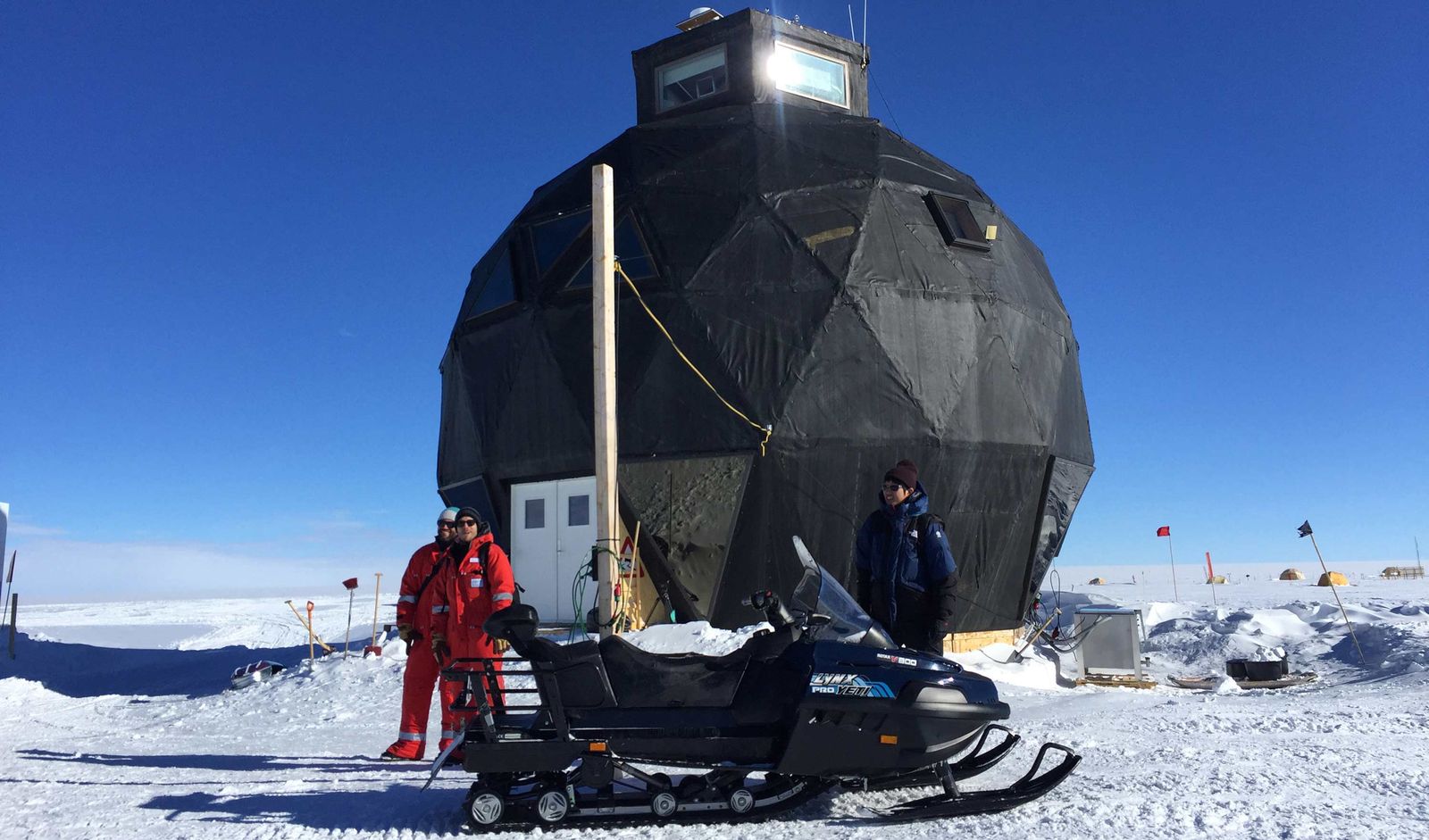 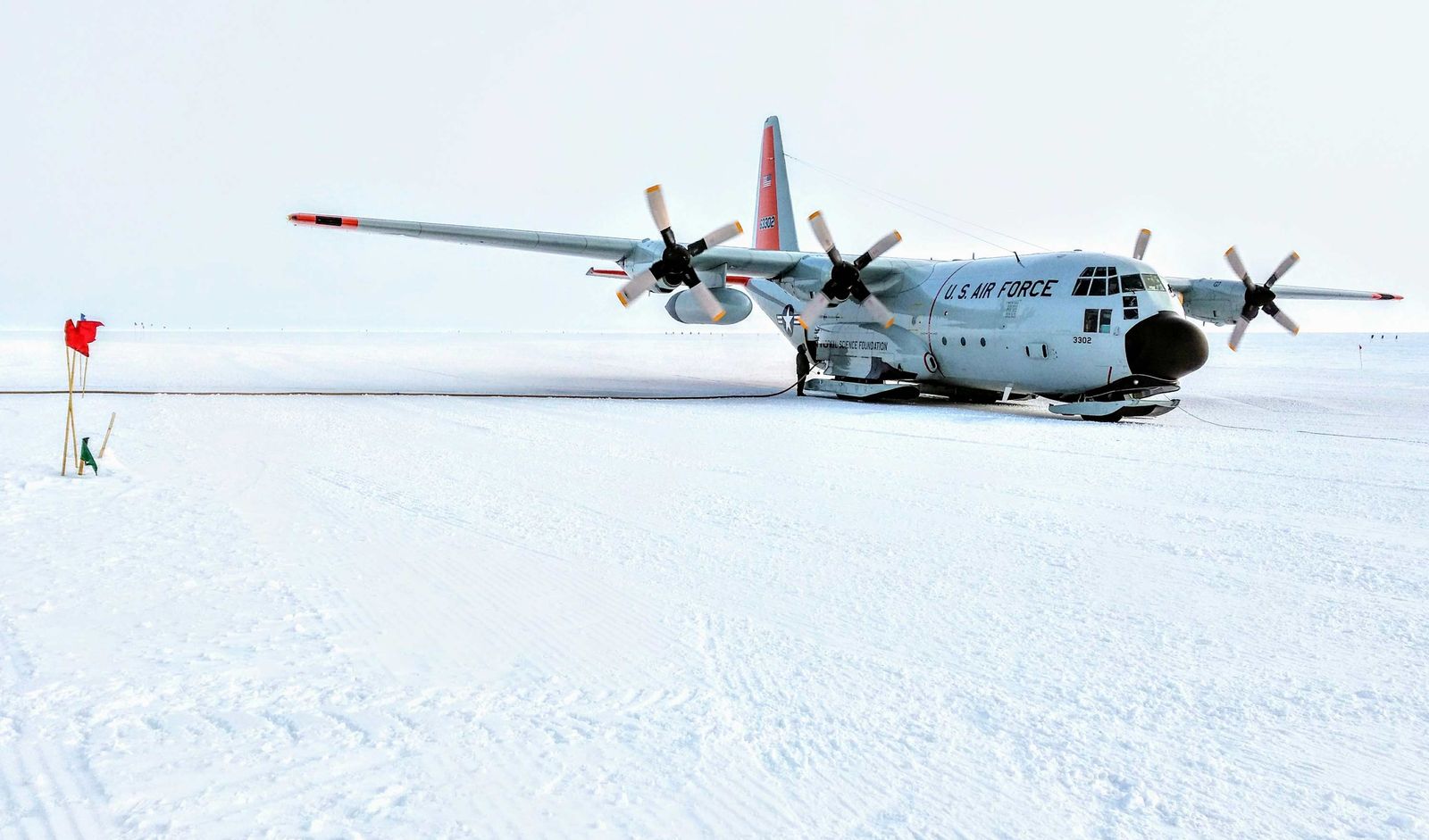