Sitting in her house in Kabul, where two steel gates provide security from the street, Shaharzad Akbar is talking about overcoming hatred. The 29-year-old, who holds a master's degree in development studies from Oxford University, wears a colorfully embroidered Bedouin dress over her tight jeans.

In January, the Taliban murdered one of her best friends, Abdul Ali Shamsi, the deputy governor of Kandahar. He wasn't much older than she is. On the day of his murder, he had met with diplomatic visitors from the United Arab Emirates. A bomb had been hidden in the upholstery of a sofa in the governor's office. It killed 13 people.

Shamsi and Akbar had co-founded a group called Afghanistan 1400, a movement of young, well-educated Afghans who campaign for putting an end to the civil war in Afghanistan. On the day of her friend's murder, says Akbar, a young spokesman for the Taliban had attended a workshop with members of the movement.

"At that moment, I hated that man from the bottom of my heart, because it was the Taliban that had killed my friend," says Akbar. "But that is precisely the point: We need to stop hating." After 16 years of fighting, she says, many members of the Taliban also yearn for peace.

How can someone continue pursuing a cause when their best friend, their brother or their child has been murdered by a suicide bomber? How can someone endure the brutality that pervades everything in Afghanistan, day after day?

Some 3,498 civilians were killed in the country last year, most of them in bomb attacks. About 7,000 members of the Afghan security forces also died, bringing the death toll to an average of about 30 a day -- an intolerable number.

'This Murderous Frenzy Has to Stop'

The capital Kabul resembles a fortress. It is currently undergoing its bloodiest period since the beginning of the U.S.-led invasion. Bomb attacks are commonplace. One of the worst attacks ever perpetrated in the capital struck the German Embassy on May 31. More than 150 people died and 460 were injured when 1.5 tons of explosives went off. The embassy building was almost empty, but the terrorists killed many employees of the Roshan telephone company who were housed in a building across the street. Almost all the dead were young university graduates, the kinds of people who could have helped rebuild the country.

"This murderous frenzy has to stop," says Shaharzad Akbar. In an art initiative, she and other activists with Afghanistan 1400 dyed the Kabul River red for an hour in February, making it look as if it were blood flowing through the heart of the capital. "With environmentally safe food coloring," Akbar is quick to point out. The group wanted to impress upon Kabul's citizens the message that this war is not God-given, but one that is man-made. The event was reported in the media, and hundreds of pedestrians stood on the bridge and discussed its meaning.

For the last decade and a half, the world community has failed to solve the political problems in this region. Still, many things have improved. Today there are roads all across Afghanistan, including in areas where there were no roads before. Health care is improving. Even the mail is delivered with some reliability.

The country has produced female conductors, pilots, paratroopers and entrepreneurs. There are women-run radio stations and daily newspapers in almost every province. Dozens of TV stations produce daily political talk shows and broadcast news from around the world. Eighty percent of Afghans own a mobile phone, and the country's colleges and universities produce tens of thousands of new graduates every year. Thousands of young people have studied abroad.

The emergence of the new, educated generation is perhaps the most revolutionary development of recent years. The seed sown by the West seems to have sprouted. The young generation are children of the global community, and in many respects they think in much the same way as young people in Europe or the United States.

Despite this social progress, peace in Afghanistan is more remote than it has ever been since the beginning of the Western invasion 16 years ago. One of the unwritten rules of survival in Kabul is knowing that 8 a.m. on Wednesdays and Saturdays, before and after the Islamic weekend, is the preferred time for suicide bombers. It's when the largest number of people are in the streets. As a result, many Kabul residents leave their houses a half-hour earlier or later. They avoid the Massoud roundabout near the U.S. Embassy, as well as the airport road, places frequently targeted by suicide bombers.

The fairground at the Kabul Zoo has recently been added to the list of dangerous places, because it is known as a place where lovers meet. Mosques where prominent members of the government pray are also to be avoided. Trendy restaurants like the iCafe, Slice and the 24/7 Pizza Shop are considered risky, as is the attractive Spujmay Restaurant on Lake Qargha, a few kilometers outside the city.

The Taliban's strategy is to spread as much terror as possible. The Afghan intelligence service discovered that a Koran school in Chaman, a Pakistani border city, allegedly trains suicide bombers for attacks in Afghanistan. The goal, according to the Afghan officials, is to kill so many people that the Afghan people will rebel against the government in Kabul because the government is unable to protect them.

The young elite opposes this culture of violence and is fighting for fundamental changes in the country. Women and men are allowed to sit together in the lecture hall at Jahan-e-Noor University, a private educational institution in Downtown Kabul. The university has a journalism program and will soon add a political science and economics department. "We demand a functioning government, social justice and opportunities," says Mohammed Shoib, a 23-year-old student from Baghlan. For him and his friends, he says, the biggest problem is traditional Afghan society. "The old people understand nothing, but they want to decide everything," says Shoib.

The chancellor of Jahan-e-Noor University is only 27. As the host of a prominent political show on Tolo TV for six years, Muslim Shirzad has become a media star. Shirzad has interviewed the country's political heavyweights, including suspected war criminals like the current vice president, Rashid Dostum. Shirzad asked him about the source of his wealth and his many weapons. Fifteen years ago, it would have been unthinkable for such a young man to publicly challenge such a powerful militia leader.

"I have traveled in 50 countries, but ultimately I wanted to be here," says Shirzad. His short hair is parted on the side, and he wears a slim-fitting suit with a mustard-colored tie. "Europe is good for Europeans, Australia is good for Australians, and Afghanistan is good for us. We have a great future."

But what about the corruption, the unemployment and the bombs? Shirzad says he abides by the old Afghan saying that you shouldn't fall in love unless you have the heart of a lion. In other words, those who lack courage are better off staying at home. He teaches the same principle at his university: "Have self-confidence. You can do it, because you are a hero."

It's a principle that's been embraced by 20-year-old Basira Joya, one of his students. "I want to give a voice to women whose voices have been stifled," she says. She is wearing a loose headscarf over a topknot, red shoes and a miniskirt over leggings. She uses eyeliner to shape her eyebrows, and sports pink lipstick. She moved to the capital two years ago and lives with her brothers. Joya works as a newscaster on Zan TV, a private station, and uses her salary to pay for her tuition and expenses.

The members of the new, educated elite pursue different goals than the old fighters. They are no longer willing to prolong the ethnic enmities of their fathers, which have shaped the country. These young people are no longer willing to listen to old men and militias who own weapons, but are unable to read or write. Many older people, for their part, ridicule civil movements like Afghanistan 1400 as unrealistic and naïve.

The activists hold strategy meetings once a week in their small office in the Kolola Pushta neighborhood. Their discussions often revolve around whether they should operate within or outside institutions that they believe to be "completely rotten and dysfunctional." The words "Give Peace a Chance" are written on the wall.

But it isn't easy to believe in peace in a place ruled by violence. After the death of her friend, activist Shaharzad Akbar tried to seek comfort in the words of a poem by an Afghan poet, even reciting some of the lines by heart: "You smell of the steel of your weapons, you smell of blood, you smell of opium. Kiss me and leave it all behind." Early one morning she went hiking in the mountains near Kabul, and repeated the words to herself.

By 5 a.m., before the sun had risen over the capital, she had reached the summit. The sky was clear over the sand-colored buildings of Kabul. Looking for beauty helps her to drive away depression, she says.

Akbar wants to continue shaking up society. She and other members of Afghanistan 1400 recently planted 3,498 trees in rural Afghanistan, in commemoration of the innocent civilians who died last year. "These are not just numbers," she says, "these are people, and so are we." 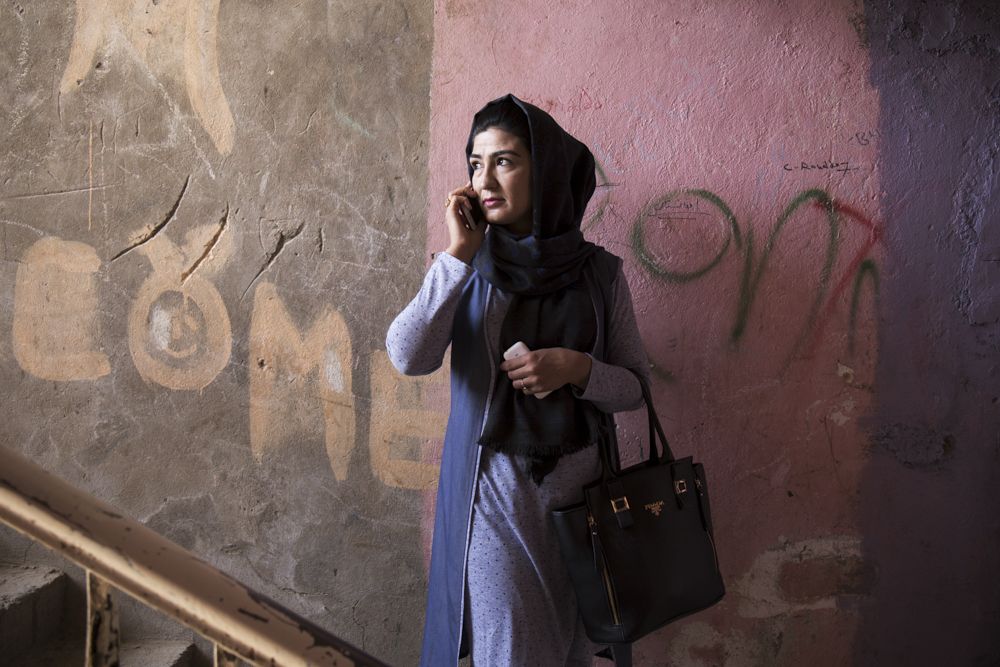 Pariza Rahmani, spokeswoman for the Uprising for Change movement 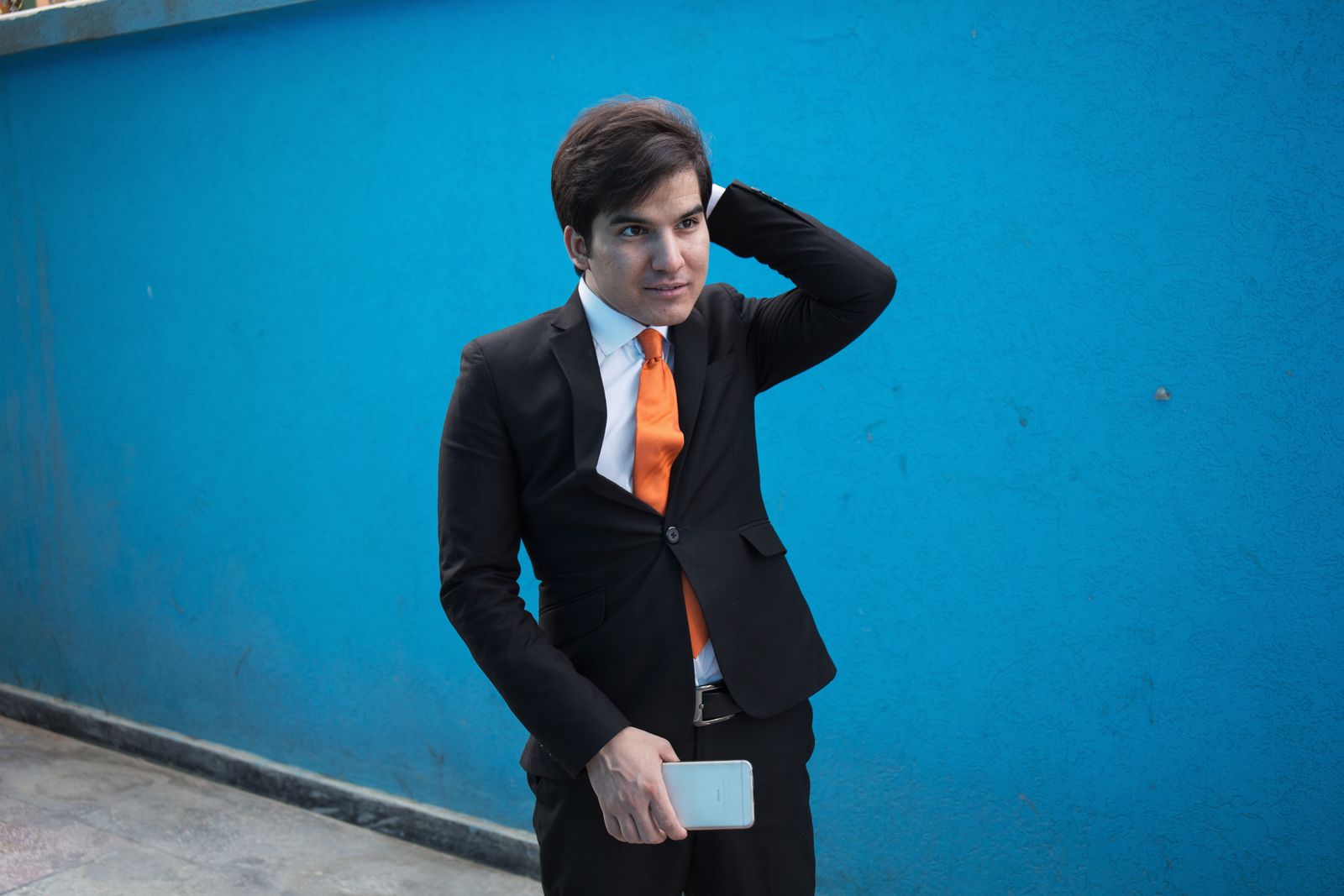