Waiting is the worst part, says Saliha M., not knowing what will happen next or whether the Germans will get in touch. Or whether she will have to return to Afghanistan. For the past several days, Saliha has been waiting in a hotel in Peshawar, Pakistan. The fact that she even made it here is a miracle in itself.

Saliha, 20, studied economics at university in Kabul, financing her studies by painting oil canvases. She was also an advocate for women’s rights and a member of Afghanistan’s first female mountaineering team, in addition to traveling regularly around the country to speak at conferences.

Since the fundamentalist-religious Taliban took power in mid-August, though, people like Saliha have been in grave danger. With help from activists belonging to the initiative Kabul Luftbrücke (Kabul Airlift) led by German filmmaker Theresa Breuer, Saliha was able to secure a seat on one of the German government’s evacuation flights. But Saliha was never able to make it to the overcrowded airport. "It was such chaos, I just couldn’t get past the people,” she says over the phone.

Saliha initially hid at an acquaintance's place in Kabul. But when the Taliban began conducting door-to-door searches, looking for perceived traitors, she no longer felt safe there either. She decided to flee to Pakistan overland with two friends of hers, also women. Her parents stayed behind in Afghanistan. Saliha can’t talk about how the trio of young women managed to secretly cross the border to Peshawar, because doing so could endanger others.

Heiko Maas (left) with his Pakistani counterpart. The German foreign minister has pledged to do all he can for local hires left behind in Afghanistan, but little has happened so far.

Their odyssey, though, isn't over. Although she is safe from the Taliban for now, Saliha doesn’t have a visa to stay in Pakistan. If she is caught by police, she could be deported to Afghanistan at any time.

Saliha is trying to find her way to Germany, where her sister Mariam has already been living for two years, and the Kabul Airlift initiative has agreed to cover the cost of her flight. Saliha’s name is also on an evacuation list prepared by the German Foreign Ministry, and the Interior Ministry (BMI) has also agreed to grant her entry into Germany. But in order to leave Pakistan, Saliha still needs a visa from the German Embassy in Islamabad. She has had difficulty reaching anyone in the relevant offices at the embassy, so Saliha has been unable to leave her hotel room in Peshawar. She’s slowly running out of money. "I don’t know what else to do,” she says.

Saliha’s fate is symbolic of Germany’s treatment of Afghan people with an acute need for asylum. Officially, the German government claims to be doing everything in its power to help women’s rights activists like Saliha and the local hires of German institutions in Afghanistan. German Foreign Minister Heiko Maas traveled at the end of August to countries neighboring Afghanistan to ensure that the evacuations would continue even after the end of the airlift. In an interview with DER SPIEGEL four weeks ago, Maas said Germany has a "damned duty" to get as many people out of Afghanistan as possible.

The fact, though, is that the vast majority of Afghans are still entirely on their own. Several local hires who worked for Germany’s armed forces, the German federal police force and the German development organization GIZ told DER SPIEGEL that they haven’t heard anything from the German government since the end of the airlift on August 26. And even those who have made it out of the country like Saliha haven't been able to count on help from Berlin.

The reason that so few people have been evacuated from Afghanistan since the airlift is a mixture of the government in Berlin being overtaxed as well as a general unwillingness.

The German government is currently working from two lists: a master list with around 17,600 local hires and family members, in addition to a "human rights list" with the names of around 2,600 Afghan men and women deemed to be at an especially high risk like Saliha M. Plus their family members. The Foreign Ministry managed to push the "human rights list" through against resistance from within the federal government. In total, Berlin allegedly hopes to evacuate up to 50,000 people. But between mid-August and the beginning of September, it only managed to get 4,921 men and women to Germany, a figure that includes German citizens.

Experts agree on what must now be done: There needs to be a central point of contact people can turn to. For as long as the airport in Kabul isn’t fully operational, the German government would have to try to get them across the border in buses and then fly them to Germany from Pakistan or Iran. At the very least, the German government should be sending people seeking protection clear information by email about whether there are plans to fly them to Germany and what steps they need to take.

"The Failure in Afghanistan Continues"

Instead, though, the German government is getting tangled up in bureaucracy, and ministries are casting blame at each other. The reason that so few people have been evacuated from Afghanistan since the airlift is a mixture of the government in Berlin being overtaxed as well as a general unwillingness. Following the hasty withdrawal by the Bundeswehr and the delayed airlift, this now marks the third time that Afghans who worked for Germany have been left in the lurch. "The failure in Afghanistan continues," says Erik Marquardt, a member of the European Parliament with the Green Party, who is helping out with the Kabul Airlift initiative.

A woman speaking to a Taliban fighter in Kabul: The security situation in the Afghan capital is deteriorating by the day.

To date, the German government still hasn’t developed a plan to move large groups out of Afghanistan quickly. The German Embassy in Kabul is mostly empty, save for a few guards, and there is no one on the ground there who could organize bus transports. Like Saliha M., some people seeking protection are trying to make their way past the Taliban to travel to Pakistan or Uzbekistan on their own, but they often fail because of the increasingly restrictive border controls. On Tuesday, Maas called his counterpart in Tajikistan, but he received little more than a vague promise that the country would periodically open its borders to German citizens.

Meanwhile, experts at the Foreign and Interior Ministries in Germany are haggling over who should be admitted to the country and how they can confirm the identity of the candidates before they depart for Germany. The arguments have been fueled by an initial assessment from the German Defense Ministry’s airlift. The German security authorities have calculated that among the more than 4,000 Afghans who were flown out, there were 53 people representing a potential danger to the state or outright criminals, some of whom had previously been deported from Germany and were now returning on the Bundeswehr flights. Interior Minister Horst Seehofer is urging that the identity of all candidates be carefully vetted before they are allowed to enter the country. At the Joint Counterterrorism Center, security authorities have set up a special working group on Afghanistan.

Diplomats at the Foreign Ministry have recently accused the Interior Ministry of deliberately slowing down evacuations for political reasons. They say the aim is to allow as few refugees as possible into Germany before the national election later this month. The Interior Ministry, in turn, claims that the Foreign Ministry submitted its list of names late, which has led to delays in security clearances.

The lack of coordination between the two ministries has repeatedly led to serious misunderstandings. For example, federal police officers stationed at the United States military base Ramstein didn’t know that nearly 190 Afghans were flown there by the U.S. Air Force at the end of August and had long since received entry permits for Germany from the Foreign Ministry. Some of the new arrivals are applying for asylum in Germany out of fear that they will otherwise be deported. One Afghan journalist who had reported for the German magazine Stern in recent years was put on a plane bound for the U.S. The German authorities are now seeking to bring him back to Germany.

Even as the government ministries in Berlin are standing in each other's way and the evacuations have stalled, the security situation in Afghanistan continues to deteriorate. There are increasing reports from various parts of the country of Taliban violence against dissidents. One of those places is the Panjshir Valley, where civilians have reportedly been killed - and that in a place that had until recently been a stronghold of resistance against the Taliban. For many in Afghanistan, such news is a source of panic.

That includes people like Sharif Ibrahimi worked as a translator for the German armed forces from 2009 to 2017 and later for the German foreign intelligence service, the BND. Now, on a September afternoon, he is sitting in a Kabul restaurant with his wife and three children, fearing for his life. He doesn’t want to provide his real name out of fear of the Taliban. Ibrahimi recounts how, for years, he gathered information for the Germans, and how he repeatedly sounded out Taliban agents. "Of course many people now have an interest in killing me," he says. He adds that his neighborhood is crawling with Taliban. "They pull up in Ford pickup trucks, go door to door, check IDs, and have young men step forward and take them away."

Ibrahimi tried to contact the German armed forces numerous times in attempt to get the papers he needed to move to Germany, most recently in June. But he says he never received an answer. In August, though, his name suddenly ended up on the German government’s evacuation list. Ibrahimi made his way to the airport with his family, but like many, he didn’t make it onto one of the planes. He’s been waiting for word from the Germans ever since. No one can be reached at the number he was able to call while the airlift was still running.

"I risked my life for the Germans for eight years," Ibrahimi says, and saved the lives of numerous Bundeswehr soldiers. "Does that no longer mean anything?" 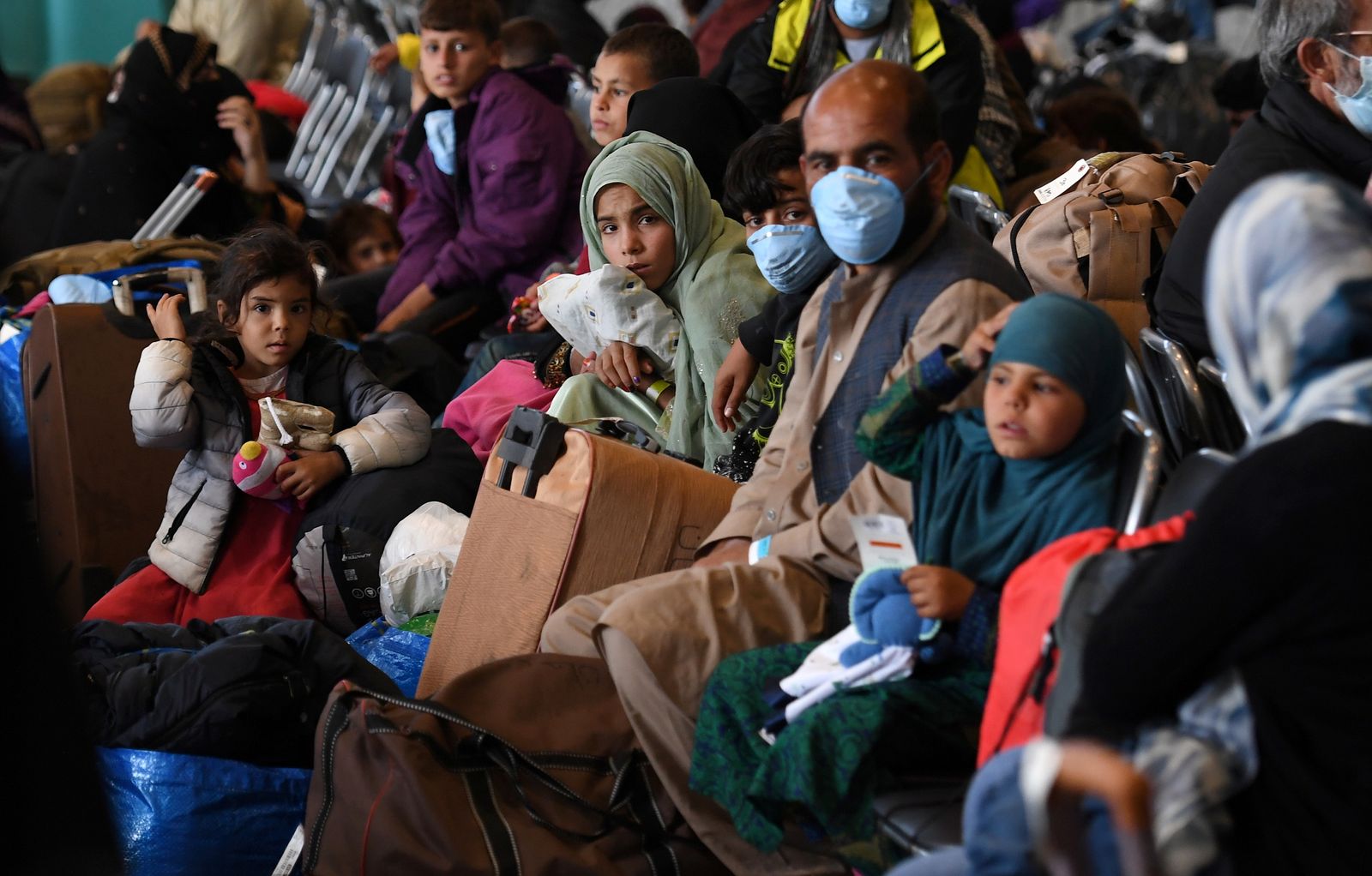 Afghan refugees at the American military base in Ramstein, Germany 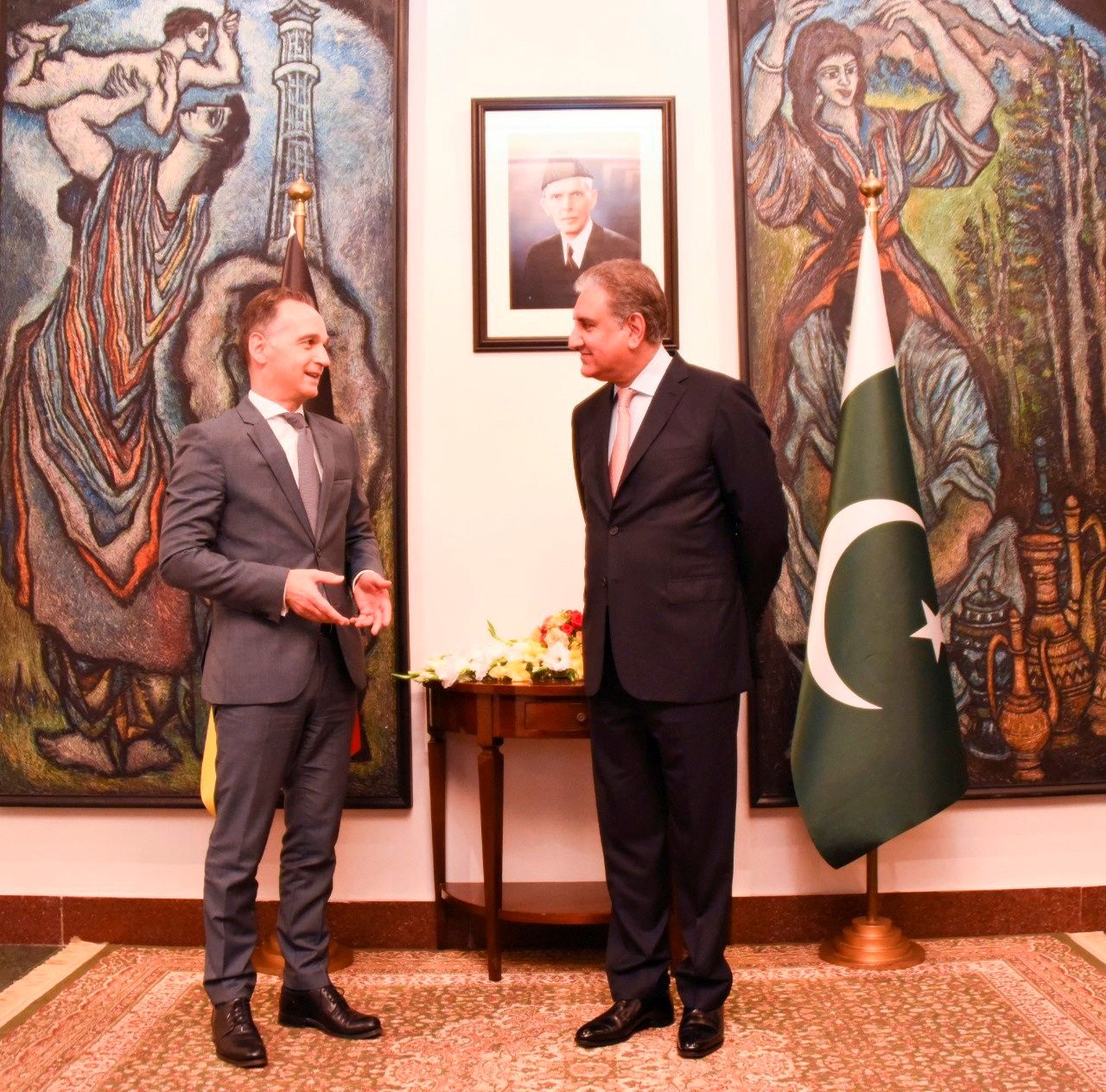 Heiko Maas (left) with his Pakistani counterpart. The German foreign minister has pledged to do all he can for local hires left behind in Afghanistan, but little has happened so far. 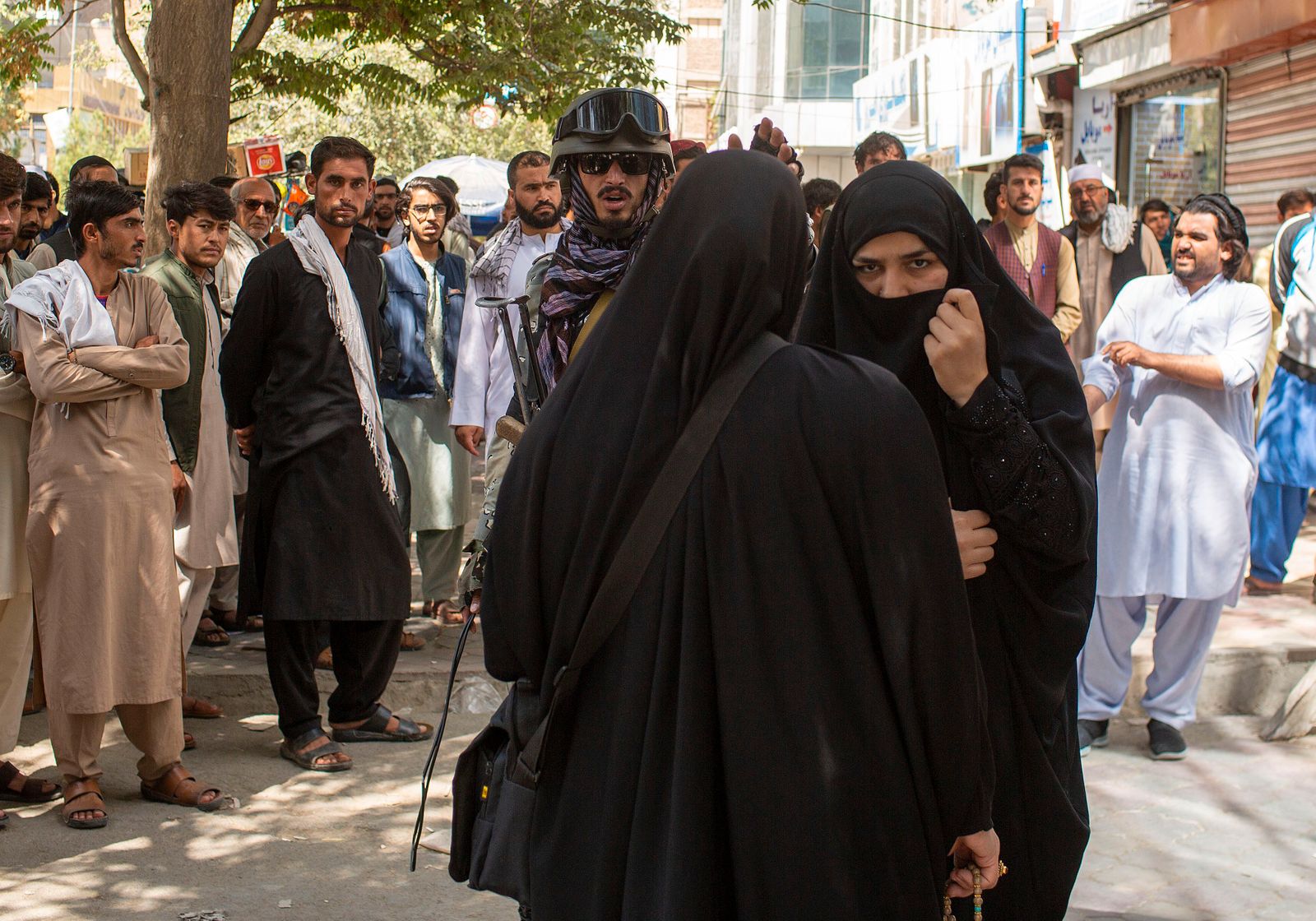 A woman speaking to a Taliban fighter in Kabul: The security situation in the Afghan capital is deteriorating by the day.