There are plenty of stories making the rounds in Turkey about Prime Minister Recep Tayyip Erdogan's rage. The son of a sailor from Istanbul's working class neighborhood of Kasimpasa who made it all the way to the top of the Turkish government, Erdogan has always been a bit of a Kabadiyi, a ruffian or hothead. He is someone who never avoids a fight -- whether it be on the streets, on the football pitch or now, years later, in politics.

This political leader has never made much of an effort to keep his exuberant temper in check. Quite the opposite in fact. "Anger is an art of rhetoric," Erdogan once said in a TV interview in response to a question about his character. "This idea of showing the other cheek -- we don't have that. I am not some kind of patient sheep."

This is why Turks either love him or hate him. Mostly they admire him and never more so than after his performance at the World Economic Forum in Davos on Thursday.

It was here that Erdogan, with a particular feeling for the mood in his country, didn't mince his words during a debate with Israeli President Shimon Peres. He called the recent Israeli operation in the Gaza Strip a "crime against humanity" and "barbaric." He said a "curse" would fall on Israel for their actions during the 22-day military operation and then stalked out of the session after complaining that the moderator was not giving him the chance to respond to Peres. In a meeting with the United Nations General Secretary Ban Ki-moon he even called for Israel to be excluded from the UN.

There is hardly a leader in the Muslim world, apart from the Iranian president, who has spoken out so harshly on this issue. And while Turkey has never seen so many people out on the streets in support of the Palestinians, now suddenly demonstrators cross the Arab world are also carrying images of Erdogan.

It is likely that the popularity of the "Hero of Gaza," as some Turkish newspapers are describing Erdogan, will now grow after his Davos appearance. His supporters greeted him as the "Hero of Davos" and the "Conquerer of Davos" on his return to the Atatürk Airport in Istanbul. So many people had gathered here during the night to welcome back Erdogan and his wife Emine that the traffic around the airport ground to a halt. 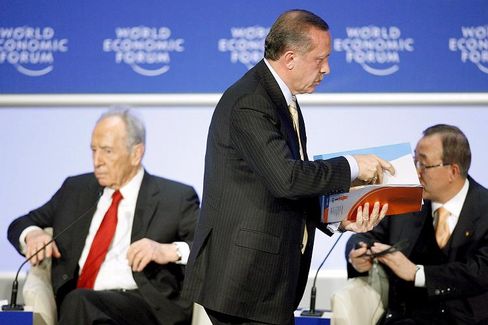 Recep Tayyip Erdogan (center), walks off the stage at Davos after an altercation with Israeli President Shimon Peres (left) at the World Economic Forum in Davos.

The Islamic newspaper Vakit described Erdogan's fit of rage as an "Ottoman slap in the face for Israel," but even the moderate Yeni Safak was describing the event as "historic." The Takvim newspaper was happy that "Davos is over," while the CNN Türk network passed on the good wishes of the Palestinian ambassador in Ankara.

"I did not target at all in any way the Israeli people, President Peres, or the Jewish people," Erdogan told a news conference later on Thursday. "We had an exchange of views, and the views are views," Israeli President Shimon Peres said on Friday.

Nevertheless, observers in both countries believe the incident has brought relations between Ankara and Jerusalem to a low point. The countries are displeased with each other -- and it didn't just start with Erdogan's latest failures, said one high-ranking Israeli government official. The main issue is the entire political line of Erdogan's AKP government, which has no qualms about taking up contact with Iran as well as Hamas, which Turkey views as a "legitimate dialogue partner."

Did Erdogan unleash a genie in a bottle that he can't get back in?

Not long ago, American Jewish organizations warned Erdogan about growing anti-Semitism in Turkey, which is a popular holiday destination for Israelis. "Hatred against Jews has been expressed in front of the Israeli embassy. Our Jewish friends in Turkey feel threatened," they wrote in an open letter to Erdogan.

"Turkey is already risking its position as a neutral mediator," says the former Turkish Ambassador to the US Inal Batu. And Onur Öymen, vice chairman of the left-wing Kemalist opposition party CHP, goes even further. He claims Erdogan "acted like a spokesman for an organization that is classed as terrorist" and that he has "ruined the international prestige of Turkey."

Critics claim Erdogan may have been motivated by upcoming municipal elections in Turkey in March. Sharp words against Israel are always popular with AKP's deeply religious core voters. In fact, the only group that swears by the elite project of a "strategic partnership" with the Jewish state is the secular Turkish army and the circles that support it.

This cooperation is set to continue despite Thursday's outburst. "We need one another," says Ozgur Hisarcikli of the German Marshall Fund in Ankara. "The Israelis are far too pragmatic to lose their most important Muslim allies," he says. "And the Turks need Israeli weapons."

It was a pity, therefore, that Erdogan could not have made his criticism in slightly more diplomatic tones. For Hisarcikli it is regrettable that he used the "spirit of Kasimpasa." "Many of us are ashamed of him." But that's not how his supporters feel. They even set up a Web site for him on Friday called "Conquerer of Davos," ( www.davosfatihi.com), in which he is depicted with his hand on his heart and his gaze looking toward the Turkish flag. That is just how they love him.