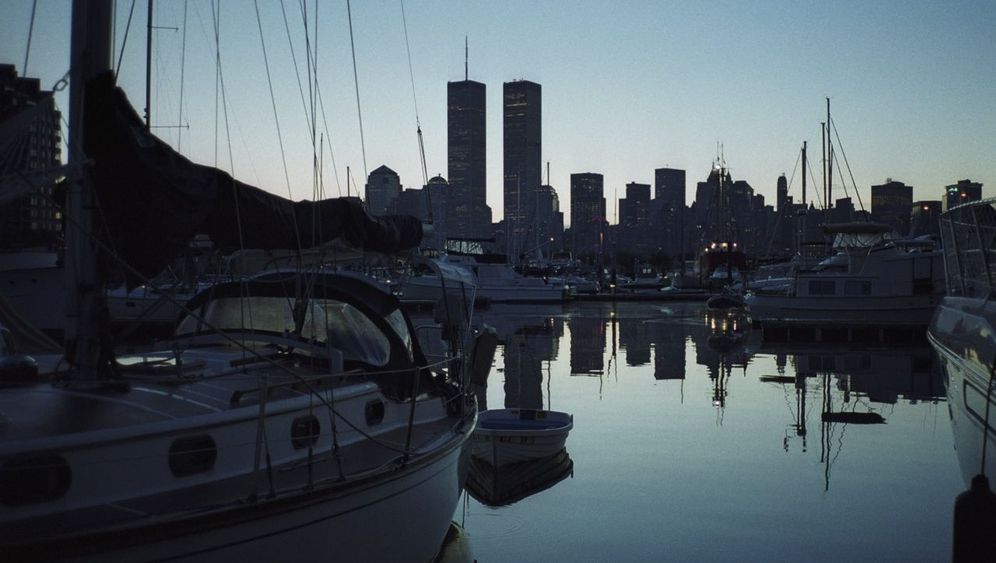 Photo Gallery: The Towers Across the Water

In the summer of 2001, my brother was living on a sailboat in New York Harbor. For one week, I went to visit him there to relax and sail a bit. I wanted to shop in Manhattan, and enjoy the last warm days of summer. The views were dazzling.

Friday, September 7: In the late afternoon my brother picked me up from the airport. We drove through rush-hour traffic to his boat in the Liberty Landing Marina, a yacht harbor on the opposite side of the Hudson River from Manhattan. Directly across, we could see the glittering skyscrapers of the World Financial Center -- a complex of several buildings crammed with so many businesses that it had its own postal code. American Express had its headquarters there, Dow Jones, the Bank of America and dozens of others. Above it all stretched the twin towers of the World Trade Center.

Saturday, September 8: We took our first cruise, past Manhattan and the Statue of Liberty, under the Verrazano-Narrows Bridge -- the largest suspension bridge in America -- and out to the open ocean. We wanted to reach the Ambrose Lighthouse, which was the point where Atlantic crossings used to be timed, on the American side, for purposes of judging "Blue Ribbon" awards for the fastest ocean liners.

Sunday, September 9: We took the boat out again in brilliant weather. Cruise ships on their way to the Bermudas -- white ocean giants -- bore down on us in the afternoon. We sailed through the darkening harbor in the evening, very close to Manhattan. We glided past the lit towers of the World Trade Center and its yacht harbor, with its expensive elegant boats. Some of them had helicopters on the afterdeck.

Monday, September 10: I had breakfast with my brother, then he went to work. I stayed on the boat all day, lying in the hammock between the mast and foresail. Cooking, eating, then a siesta below deck. A day of leisure.

Tuesday, September 11: I intended to meet Steve, the son of my mother's second husband, later in the day. But we hadn't fixed a time or a place and had promised to call each other by 10 a.m. I had breakfast in the rear of the boat with my brother, enjoying the view of Manhattan. The morning was quiet and warm. The weather promised to be outstanding. The sun rose directly between the twin towers. I photographed them so often that my brother finally asked whether I didn't already have enough pictures.

My brother went to work. I sat with a book on deck until the sun grew too warm. At 8:15 I went into the cabin and lay down on the bed with my book so I could see blue sky through the deck hatch. The boat didn't sway, and I dozed off. Just after 9 the phone rang. It was Steve. We chatted and made plans for the day. He told me where we could meet, which subway line to take. I wanted to smoke a cigarette and went up to the deck. That was when I saw the smoke.

First I saw a cloud in the south, unusually straight, like a horizontal cigar. I moved my head and saw that it ended at the World Trade Center. Then I realized that the cloud actually began there. "The towers are burning," I said to Steve. I noticed other people on other boats, looking at Manhattan. A couple on a neighboring boat had a TV. They said: Terrorists with planes, an attack, not an accident, both towers hit. I hung up. I never saw Steve that summer.

Stunned, I stared at the smoking Twin Towers. Behind some windows there seemed to be fire. The sky was gleaming blue. Parts of the façade fell. I found my camera and started to take photos. Then something astonishing happened: With a thundering roar, the South Tower collapsed into itself, imploded. The collapse seemed to last forever. As it abated, a cloud bulged from the streets, covered the nearby buildings and veiled the lower part of Manhattan. The South Tower had disappeared. The North Tower stood in a cloud of dust, steel and smoke.

The phone rang again. My father was calling from Germany. He asked where and how I was. I said, "One tower is gone, just gone." He told me, "The Pentagon was hit too, maybe other places. In Pennsylvania they shot down an airplane." The magnitude of the catastrophe overwhelmed what I had imagined. Nevertheless: The North Tower still stood. Smoking. The situation seemed to relax.

Around 10:30 it happened: Loud, dull and as if in slow motion, the building collapsed into itself. A column of smoke seemed to leave a final trail of its silhouette in the sky. Then the cloud engulfed Manhattan and darkened the sun. The island disappeared. A breeze from the north pushed dust and smoke out of the streets to the south, into New York Harbor. Little by little the smoke cleared, and the skyline showed its new shape.

Late that afternoon, inaudibly to me, but after a long fire, the third building fell -- World Trade Center 7, a tower with 47 stories -- admittedly without leaving a noticeable gap. The Twin Towers had dominated the skyline like no other building.

My brother came home late. The streets were crammed, he said -- traffic jams and checkpoints everywhere. The evening sky was cloudless. The sun went down and sank Manhattan in a gold-red light. The day ended, leaving behind deep confusion and sadness. The television brought endless reports, interviews, speculation about the number of victims, and soon the names of the terrorists and guesses about their motives. Everyone understood: Something had just ended. But no one quite knew what had begun.

Wednesday, September 12: We woke up early. The sky was cloudless, as if nothing had happened. Smoke and dust still hung over the city, even if it had sunk a little, and darkened the rising sun. The wind turned in the afternoon, and the smell of melted cables, plastic and concrete wafted over the water. Then the smoke drifted back into the city. I stayed almost all day on the boat, lethargically. I stared at Manhattan as if hypnotized; I watched television. I talked briefly to people on neighboring boats. The world seemed to be in a coma. I sat on the boat and hardly moved.

Thursday, September 13: The cloud of dust pulled back into the city. Where the water taxis docked, I saw firemen with dusty uniforms and gray shoes. Liberty State Park was closed. Personnel transport trucks stood in a row, soldiers with helicopters, dozens of ambulances, which largely weren't needed. Not a single commercial plane was in the air. Now and then a fighter jet circled Manhattan. The rescue work was mostly inaudible, but at night the whole disaster area was brightly lit. Everyone seemed stressed. No one knew whether more attacks would come when commercial flights resumed.

Friday, September 14: The sky was covered, foggy, and the air was cold. It rained. The water in the harbor looked black. Clouds of dust kept rising. The world was gray, as if every color had drained out of it.

Saturday, September 15: The gloom from the day before had burned off, the autumnal air felt warm. My airline confirmed my flight home on Sunday. They asked me to arrive earlier at the airport. We visited a friend of my brother's, went walking along the Atlantic and ate dinner. On the Garden State Parkway cars flew the American flag. At night I saw colored lights on the club opposite the marina, and we heard music across the water.

Sunday, September 16: Around noon my brother brought me to the airport. We said goodbye. In the plane there were plastic spoons and knives. The forks, though, were still steel. The plane landed in Frankfurt almost on time.

Reinhard Karger's photo exhibition "Meine Woche in September" (My Week in September) can be seen until October 3 at the Patton Stiftung: Sustainable Trust located at Saargemünder Strasse 70 in Saarbrücken, Germany. Karger has also launched a memorial page (German only) which will be available until Sept. 11.