Fethullah Gülen is sitting in a small reception room in his home. There's a small side table next to him, a blue fan and a glass of water. He wears a dark blazer and leather slippers. The elderly man has something he wants to say.

"I am prepared to be screened by an international commission," he says. "If they find that I am guilty, then I will go to the execution chamber. But that won't happen because I haven't done anything."

Gülen has been the focus of a considerable amount of international attention in recent days, with Turkish President Recep Tayyip Erdogan having accused him and his influential Islamic movement of engineering the failed weekend military putsch in Turkey from his home in the United States. The preacher has been living in American exile since 1999 because of his many enemies in Turkey: His organization, called Hizmet, operates a global network of schools, firms and media companies -- and is treated like a terrorist organization by Erdogan's people. Gülen's guarded complex, located near the small town of Saylorsburg, Pennsylvania, around 100 miles from New York, is considered by officials in Ankara to be the headquarters of its greatest enemy.

Erdogan's accusations are serious, and Gülen wants to defend both himself and his movement. He says he had nothing to do with the putsch and that Erdogan's behavior borders on insanity. "I have already said several times that I am against any form of violence when it comes to achieving political goals," he says. Gülen also claims that he supports democracy in Turkey. "I reject military putsches," he says.

Those visiting the 75-year-old are subjected to a security screening at the entrance to his spacious complex, with armed guards conducting checks of each guest. The subject of anonymous death threats, the FBI advised Gülen to take this precaution several years ago. There are several buildings on the park-like property where his followers dedicate themselves to prayer. Few people are in sight and a Porsche SUV can be seen in a parking spot. Normally, guests are only rarely received here -- and the media have virtually no access.

But this weekend, Gülen opened his doors to a group of reporters. He lives reclusively, in the back part of the property and guests must either take off their shoes or wrap them with plastic foil before entering his rooms. Women must cover their shoulders.

The reception room is formal, with lots of gold, ornamentation, elegant carpets and fine porcelain. Koran suras hang from the walls and an encyclopedia of Islam can be found on the shelves. One shelf unit is covered with all kinds of knick-knacks: a plastic combat helicopter, a globe, a vase. There's a portable radio in one corner and a view of the surrounding green hills from the window.

Gülen is sitting on a beige sofa and looks weak. One of his aides says he has been suffering from heart trouble and diabetes. Gülen speaks in Turkish with a quiet voice, but his answers are long -- very long. The preacher comes across like a statesman himself as he talks about Erdogan. He knows the Turkish president well.

During the rise of Erdogan's Justice and Development Party (AKP), Gülen and Erdogan were allies, united by their deep faith. Today they despise each other.

When Gülen went into exile, he called on his supporters to take over power in Turkey by infiltrating state institutions, thus prompting law enforcement officials to issue an arrest warrant for him.

Gülen's rise began in the 1970s when he was an imam at a mosque in the northwestern Turkish city of Edirne. The charismatic cleric distributed his sermons via video and audio cassettes, and his following continuously grew. During the same period, he built up a network of private schools, private tutoring centers and dormitories, which he called "houses of light." The alumnus of these institutions ultimately grew into a network of Gülen supporters over the decades. Today they own newspapers, television stations and banks. 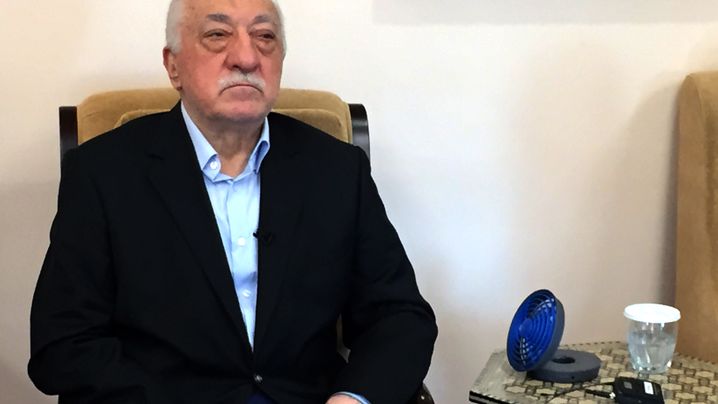 Opinions about the imam couldn't be more divergent. People who have left his movement describe the community as a sect, not unlike Scientology. Others view Gülen as being one of the most important preachers of modernist Islam, which seeks to spread a more tolerant interpretation of the religion.

For a long time, Erdogan was one of Gülen's most prominent supporters -- and they even entered into an informal alliance: Gülen's supporters secured votes for AKP and Erdogan gave protection to the Gülen movement's opaque businesses after he came into power in 2002.

But after the parliamentary elections in 2011, in which AKP won almost 50 percent of the vote, Erdogan apparently felt strong enough on his own to break the pact with Gülen. Erdogan, who was prime minister at the time, fired important justice officials and party functionaries considered to be Gülen followers. He also ordered the secret services to monitor the movement.

The final break between the two came in November 2013, when Erdogan announced his decision to close the Gülen movement's tutoring centers. Around 2 million Turkish youth visit the schools in order to prepare for university entrance examinations. They provide Gülen with his most important source of revenue, but also serve as places where he can recruit new followers.

For years, Erdogan has believed that Gülen sought to challenge his hold on power. Gülen, meanwhile, believes that his one-time friend has become a tyrant intent on eliminating any opposition.

"Erdogan is so hungry for power that he believes everyone else is too," says Gülen. "Erdogan comes from a poor background and now he lives in many palaces. Success and power have poisoned him."

These days, Gülen is seeking to present himself as the polar opposite of the president in Ankara. His organization has millions in assets at its disposal, but Gülen himself claims to have practically no personal belongings. His aides say that he lives solely for his faith. His small apartment, which he has willingly opened up to his visitors on this day, has two rooms. He sleeps on a mattress on the floor, and next to it is a desk with books on it, small bottles of oil and a little Ottoman treasure box. A picture of the Dome of the Rock in Jerusalem is hanging on the wall and a Turkish flag covers the shelf.

A closer inspection suggests that much consideration here has been given to security. Gülen's large veranda is furnished with black panels to ensure that he can't easily be seen and the rooms in his apartment can only be opened with a special chip card. An elevator takes Gül directly to the garage, from which he is driven to the hospital for regular check-ups. Otherwise, his people say, he never leaves the house.

Why Is He So Sealed Off?

Gülen has been described as extremely introverted, but it's difficult to imagine that being the case. How, after all, could someone so reserved build up such a major and influential movement? Followers of his movement are in important positions at all levels of the state -- in the judiciary, the military and in the political sphere. When Erdogan flexes his muscles inside the government apparatus, as he is currently doing, parts of Gülen's network are also affected.

But this quiet and modest-seeming gentleman also has a firm grasp on the political game back in his home country. Gülen insinuates it may have been Erdogan himself who staged the putsch in order to strengthen his power and he notes that the president spoke of a golden opportunity to conduct a purge. But Gülen says he was also surprised by the unusual course taken by the putsch. After all, he said, the rebels failed to eliminate the political leadership right at the beginning. In effect, he is spinning his own conspiracy theory to counter Erdogan's. But he has no proof.

In this conflict, it is difficult to tell those telling lies from those telling the truth, or even just the half-truth. Turkish domestic politics long ago became filled with intrigue, propaganda and power struggles. But a visit with Gülen doesn't leave you with the impression that he is some sort of terror mastermind or putschist. Still, it is impossible to be certain. In such appearances, it is difficult to tell what is real and what is staged.

So what happens next? Erdogan is demanding that the United States extradite Gülen, but he hasn't yet filed an official request and Gülen doesn't believe he will be extradited. Erdogan, he says, has no evidence to show the Americans. "The US justice system works. The Americans won't turn me over if there isn't a tangible reason."

His praise is more than idle. With permanent resident status, he says he likes America a lot and feels at home here. Indeed, he has even taken up an interest in American politics.

"Hillary Clinton is a good woman," he says. "She is a figure of hope for this country." 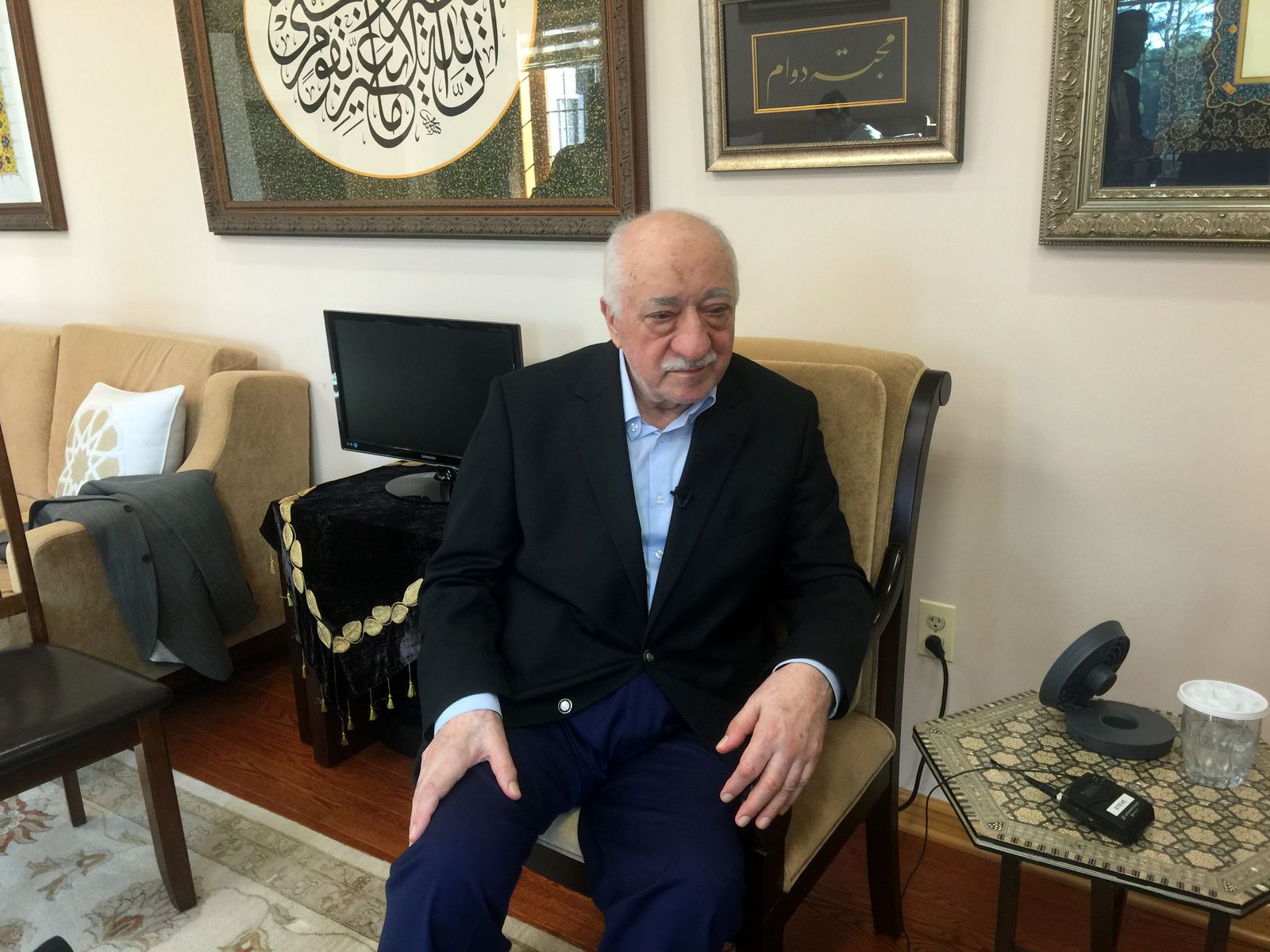 Cleric Fethullah Gülen at his home in American exile.