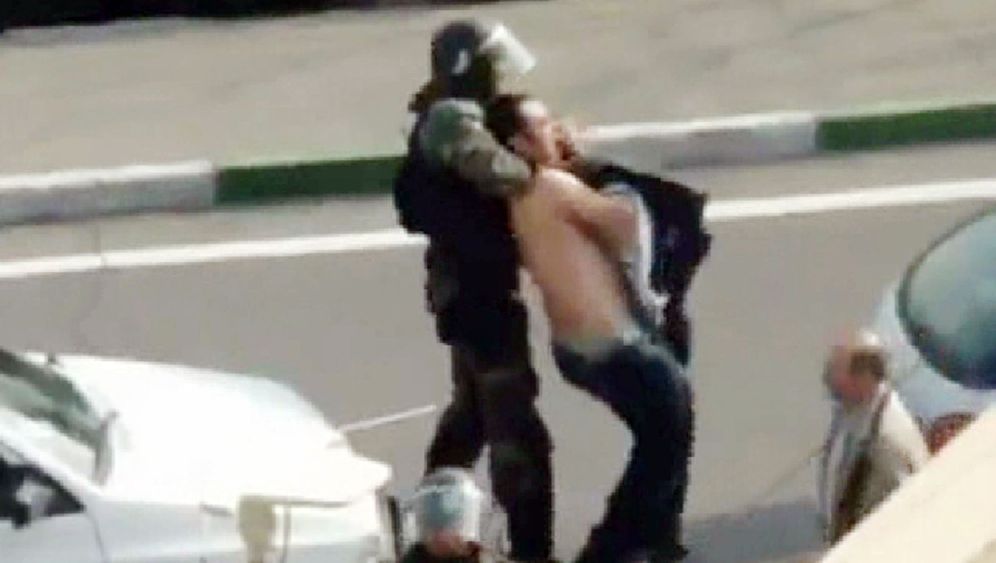 They have taken almost everything Iranian opposition leader Mahdi Karroubi has. In a bid to neutralize him, they have banned his Etemad-e Melli party (National Confidence Party), closed his newspaper of the same name and arrested 50 of his associates and confidants.

They have not even shied away from taking harsh action against his three sons. Hossein, 44, has seen his passport revoked, which is often the last step before an indictment. Taghi, 42, who was seriously wounded in the war against former Iraqi dictator Saddam Hussein, was prevented from leaving the country for medical treatment in London. And his youngest son Ali, 37, was detained, interrogated and severely beaten.

It appears to be only a matter of time before the 72-year-old Karroubi himself is targeted. Rocks have already been thrown through the windows of his house and death threats smeared on the walls. When the cleric was traveling in a rural area early this year, unknown assailants shot at him, and it was a stroke of luck that he wasn't hit.

Nevertheless, the religious scholar remains undaunted. He greets his visitors with a broad smile and makes fun of his most dangerous opponent, the "highly esteemed Dr. Ahmadinejad." He would never refer to the bigoted leader as Iran's president. According to Karroubi, "this man is a disaster for the people" and must be fought, "without violence, but with all of our strength."

It's shortly before midnight, and in his house in Nurian Street in northern Tehran, Karroubi, probably Iran's most courageous man, is still wide awake. His eyes flash behind his rimless glasses, and his feet, which he has propped up on a small stool, are twitching with tension. Whether he is raising his index finger in a show of outrage or slamming his fist onto the arm of his old wooden chair, each of his gestures shows that Karroubi, almost a year after his defeat in the fight for the presidency, still hasn't given up the fight.

Three men had entered the race for the June 12, 2009 presidential election, determined to prevent the reelection of President Mahmoud Ahmadinejad: Karroubi, former Prime Minister Mir Hossein Mousavi, 68, and Mohsen Rezai, 55, the former long-time head of Iran's feared Revolutionary Guard, the Pasdaran. Karroubi and Mousavi represented the reformist camp, while Rezai was the candidate of the pragmatic conservatives. All three refused to accept the official election result, which declared Ahmadinejad the winner with more than 60 percent of the vote.

Rezai quickly withdrew his protest after the virtually omnipotent revolutionary leader, Ayatollah Ali Khamenei, had declared the election legitimate. But Karroubi and the presumed real winner, Mousavi, rose to become the people's leaders. Three days after the election, they had already managed to mobilize 3 million supporters. "Where is my vote?" the reform supporters chanted in the streets of Tehran. The regime responded with brutal violence.

The death toll in the so-called Green Rebellion was high. According to the Iranian League for the Defense of Human Rights, there were more than 100 "verifiable deaths" among the protestors. At least 2,000 opposition supporters were arrested, a number of whom have since been released on parole.

The Changing Face of Torture

But since the demonstrations on the 31st anniversary of the Iranian revolution in February, which were dominated by Ahmadinejad's supporters rather than the opposition, it has been deathly quiet in Tehran. The mood among regime critics in the Iranian capital is almost reminiscent of the mood in Baghdad during the regime of Saddam Hussein. Iraq was once referred to as a "republic of fear." The Iraqi dictator had spies everywhere, and critics were severely punished. Sources in Tehran now say that Ahmadinejad also no longer tolerates the slightest opposition, and the prisons are said to be as full of political prisoners today as they were in the days of the 1979 revolution.

Despite all threats, Karroubi, in a conversation with SPIEGEL, says that he stands by his assertion, which the regime has sharply denied, that arrested protestors have been tortured to death. He says that he is aware of four cases. He also refuses to retract his claim that prisoners were raped and claims to be familiar with five cases, including those of two young men.

Even a harsh critic of the regime like Karroubi does not agree with the statement that the human rights violations are becoming as extensive as they were during the days of the shah. But he also points out, with a sarcastic smile, that at least the shah's torturers were "experts" who knew who they were harming and why. But nowadays, says Karroubi, the violence in the prisons is "purely arbitrary." Although he says he doesn't accept Ahmadinejad as president, Karroubi does demand that he be "held accountable for what is happening."

A Low-Key but Effective Dictatorship

The president has established a low-key but effective dictatorship. The presence of the government's thugs, the Pasdaran and Basij militias, is not particularly noticeable in the streets. But the fear of being observed, having one's conversations bugged and being arrested and convicted because of unwanted criticism of the regime has stifled the relatively liberal political life under Ahmadinejad's predecessor, Mohammed Khatami.

The regime is keeping the leaders of the Green Rebellion isolated, although Karroubi prefers not to use the term house arrest. Two guards, who register all visitors, stand in front of his house until late in the evening. "Anyone who comes to see me," says Karroubi, "can expect to face consequences." A summons to appear for questioning by the intelligence services is one of the least serious of these consequences.

When Karroubi leaves the house, he is accompanied by a group of government security agents who, as he is told, are there "to protect him from terrorists." It is a ridiculous assertion, says the cleric, noting that the real acts of "terror" are being committed by those who have forced his so-called security guards upon him.

There is a palpable attempt throughout the country to massively repress the opposition and isolate its leaders. The regime controls Internet use and mobile phone services, severing connections at will. Western journalists are only permitted to enter the country when Tehran anticipates a positive portrayal in the press, such as during the so-called disarmament summit on April 17-18. The government had invited "more than 70 countries" to attend the summit, which it had dubbed "Nuclear Energy For All, Nuclear Weapons For No One."

Meanwhile, many Iranians were more interested to know whether their fellow Iranian Mehrzad Marashi, who lives in Germany, would be the winner of the television talent show "Deutschland sucht den Superstar," which is similar to "American Idol." Perhaps not entirely coincidentally, the reception of Western satellite programs -- which are often blocked by the regime -- was not jammed on that particular evening.

The conference became a testament to the audacity of the government's propagandists. "There is no censorship here," claimed Mohammad Ali Ramin, the vice-minister of the Ershad, as the Ministry of Culture and Islamic Guidance is known. But the government does its utmost to prohibit any reporting that is even remotely critical, and hardly any politicians dare to speak without the permission of the Ershad.

Mohsen Rezai, who just a year ago was one of Ahmadinejad's harshest critics and, as the former head of the Revolutionary Guard, ought to be untouchable, has lost interest in leveling serious criticism. During the presidential campaign, he castigated the president for corruption and mismanagement, as well as his aggressive foreign policy.

Rezai, who has a black goatee and frowns frequently, is sitting in a friend's apartment in a wealthy neighborhood of north Tehran. He doesn't need permission to speak to journalists.

Fear is a word that doesn't suit a former member of the Pasdaran who risked his life several times in the eight-year war with Iraq. But as general secretary of the Expediency Discernment Council, which resolves conflicts between laws and government policy, Rezai holds a high-ranking office that he could lose at any time. He knows that even his six bodyguards will be no protection if he sticks his neck out too far in Ahmadinejad's republic.

The former military officer is still in favor with the revolutionary leader. Some believe that Rezai could even be a potential successor to the president, should Ahmadinejad's provocations go too far even for his mentor, Ayatollah Khamenei. Does he see himself as an alternative to Ahmadinejad? The corners of Rezai's mouth turn up in a slight smile: "I will serve my people where I can."

The retired general prefers to avoid critical questions, and seems intent on stirring his tea, as if the sugar could somehow solve his loyalty problems. Like Karroubi, Rezai refers to "Dr. Ahmadinejad" and avoids using the word president. And like Karroubi the reformer, Rezai the conservative says: "It can't go on like this."

Uncertain about the Future

No one seems to be able to point to a way out of the crisis. Even men with the greatest faith in God, like Ayatollah Mohammad Kazem Mousavi Bojnourdi, 66, are distraught and uncertain about the Islamic Republic's future. Bojnourdi is deputy head of a Tehran-based foundation named after Imam Khomeini. The foundation's head is Hassan Khomeini, the grandson of the revolutionary leader. With such a position, Bojnourdi is considered to be untouchable.

Bojnourdi seems deeply disturbed as he describes the regime's latest attack. He has just discovered that it was "suggested" to his "friend of more than 30 years," former President Khatami, that he should not travel to Japan to attend a seminar. "Isn't that unbelievable?" the ayatollah asks, and adds, almost as if he were speaking to himself: "Everything is possible in this Islamic Republic."

The new newspaper Bahar, which took the risk of voicing doubts about the regime, was promptly shut down. The party affiliated with Khatami, the Islamic Iran Participation Front, has been banned, as has another party, the Mujahedeen of the Islamic Revolution, which supported Moussavi.

Nevertheless, opposition leader Karroubi is not declaring defeat yet in the battle over the future of the theocracy. "The people are just waiting for a spark," he says. He intends to light that spark.

Obligated to Tell the Truth

Karroubi is calling for a rally to commemorate the anniversary of the mass protests, and he has already submitted a petition for approval to the authorities. He doesn't even believe that the government, which imposed a ban on public protests immediately after the election, will grant the permit. But, he adds, it is "important to take a stand and show people that we continue to fight, not against this republic, but for compliance with our constitution, in which freedom of opinion and democracy are established."

Karroubi denies that he has had any differences of opinion with Mousavi, the other reform leader. He says that he corresponds with Mousavi's close advisers regularly, through trusted supporters, and that the opposition leaders meet privately at least once a month. "We are largely of the same opinion in all areas," says Karroubi.

It is unclear how much longer the brave mullah, whose courage is even admired by conservatives, can continue to encourage resistance to the regime. He has no intention of abandoning his cause. As a student of Imam Khomeini, he says, he feels "obligated to tell the truth, no matter what the price."

Karroubi remains composed at the prospect of being arrested. "I am prepared to accept all consequences," he says. What else can they take from him, apart from his life?