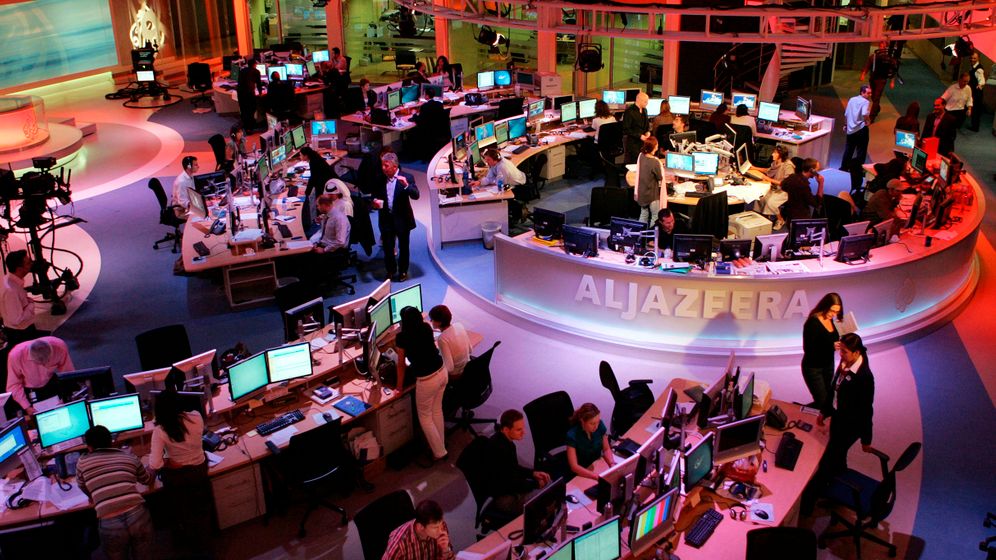 It is 10:22 a.m. and 7 seconds in Doha in the Emirate of Qatar, according to the red digital numbers on the studio clock. It's an hour earlier in Cairo. The anchorwoman, sitting in a sky-blue studio, is just switching over to the Egyptian capital, where several people were killed and wounded the night before in brutal attacks by regime loyalists against opponents of President Hosni Mubarak. Al-Jazeera is showing the images of the street fighting once again.

A professor is on the phone from Cairo. He is so distraught that the anchorwoman in Doha can hardly interject her questions as he continues to speak. Both the anchorwoman and the professor are speaking very loudly. On top of that, there are the images of violence and the news updates running across the bottom of the screen in red lettering, like warnings from another world -- a world descending into chaos. The Arab world is in crisis. Anyone watching Al-Jazeera at this moment understands that fact immediately. And a lot of people watch Al-Jazeera.

No other Arab TV network, no daily newspaper and no radio station reaches as many of the Arab world's 360 million people. Al-Jazeera's Arabic-language station is broadcast into about 50 million households.

The network is powerful in the Arab world, where it has more influence than CNN or the BBC. It determines which images are important for the people in the region -- and which emotions these images trigger in Tunisia, Egypt or Saudi Arabia or elsewhere.

Al-Jazeera isn't just a news network, but is also a political factor -- and one with a sense of mission. Its editors are particularly zealous in scrutinizing secular regimes like Mubarak's. Al-Jazeera is generally pan-Arab, but there is also a pro-Islamist spectrum within the network.

About two weeks ago, when Al-Jazeera revealed that the PLO delegation was allegedly prepared to make extensive concessions in its negotiations with Israel, the main beneficiary of the report was the radical Islamist group Hamas, which favors confrontation instead of cooperation with Israel.

In airing the story, Al-Jazeera set the stage for days of accusations. The PLO already accuses the network of waging a campaign against it and supporting Hamas with propaganda. And as nonpartisan as the network purports to be, it is certainly not entirely without bias.

Al-Jazeera seems to have been getting even more powerful of late -- so powerful, in fact, that governments are now asking themselves whether the network has the power to incite popular uprisings in the Arab world.

The Egyptian regime was hunting down journalists last week in an apparent effort to prevent the world from witnessing its thugs attacking the protesters. German journalists were also affected. An employee of the ZDF television network spent 20 hours in jail. And during the ZDF news show "Heute Journal," a laser pointer was aimed at a correspondent who was reporting live from Cairo.

'Why Are You Breaking the Law?'

The Qatar-based network was also affected. The Al-Jazeera office in Cairo was vandalized last Friday, an act the network blames on Mubarak supporters. But the reprisals had already begun at about 1:00 p.m. on the previous Monday, when four soldiers burst into a room on the 24th floor of the Ramses Hilton Hotel, from which all major TV networks are running their live reporting operations. The hotel is very close to Tahrir Square and offers a view of the center of the uprising. The soldiers, wielding Kalashnikov rifles, immediately pushed their way to the balcony, knocked over Al-Jazeera's cameras and began searching the room and collecting passports and mobile phones.

One of the uniformed men shouted at the journalists, saying: "Why are you breaking the law? You know perfectly well that we have closed your office here, and that you no longer have a license." Six employees were taken downstairs in a service elevator. The soldiers, their weapons at the ready, urged the reporters to hurry.

An army colonel, speaking politely but loudly, explained his quandary to the six journalists. "I know you're just doing your job," he snapped at the reporters, "but by doing your job you make my work more than difficult."

The journalists were released, but not before the colonel had confiscated their equipment.

But it is questionable just what benefits the regime will obtain through its rough treatment of journalists. In Tunisia, the government tossed out Al-Jazeera's journalists shortly before it was overthrown, but to no avail. A Tunisian anchorman for the network made arrangements for Lotfi Hajji, an old friend, to report from a secret location in Tunisia. In addition to being a journalist, Hajji also describes himself as a human rights activist, according to the New York Times.

When the uprising began, Tunisians sent him homemade videos documenting incidents of police brutality. Al-Jazeera broadcast the videos. More and more videos turned up, and they, too, were broadcast. Did the overthrow of Tunisian leader Zine El Abidine Ben Ali originate in Doha? Could the same fate be in store for Egyptian President Mubarak?

'We Don't Wish to Take Any Sides'

The Al-Jazeera newsroom, the nerve center of the network, where all editorial decisions are made, could not offer a greater contrast to the feverish nature of the news broadcasts. The journalists greet each quietly when they arrive at work, and they walk slowly across the pale green carpet. No one here runs or shouts.

It is 10:35 a.m. and 45 seconds when Mustafa Souag walks into his office. The tall man is wearing a light green suit, and he carefully hangs his jacket onto a coat hanger. Souag is the director of news at Al-Jazeera's mother ship, its Arabic-language station. This is also the center of power, where decisions are made on what is important in the Arab world. In contrast, Al-Jazeera's English-language station is more relaxed and aloof, more like CNN or the BBC.

Souag uses a pen with the network's logo on it, and the logo is also printed on a package of tissues on his desk. Al-Jazeera is Souag's life. He seems modest at first, when asked whether his TV news machine has political power and whether it can topple regimes.

The question amuses him. "Lotfi Hajji is not some kind of Superman who can cover all of Tunisia for us by himself!" But how much influence did the station have on the revolt in Tunisia? Souag dodges the question to a certain degree. "Academics should look into that. We are not politicians. And we don't wish to take any sides. Instead, our goal is diligent reporting -- and I believe that's enough."

Souag is a native Algerian and an intellectual. He once taught literature at university, and later worked for NBC and the BBC. He is intimately familiar with the standards Western critics apply to evaluate his network, and he believes that Al-Jazeera meets those standards. "We believe in the right of citizens to information, and we show our audience what freedom of opinion means every day," he says. "Sometimes we are accused of not being balanced. But when we ask for evidence (of the alleged bias), we don't get much in response. After all, we are constantly showing various perspectives and standpoints."

Al-Jazeera has been accused of everything since it was founded in 1996. And for every claim that is targeted at the station, there is invariably someone else who accuses it of the exact opposite. Some people say it is too tolerant of Islamists, while others claim it treats them unfairly. Some say it allows itself to be influenced by Arab autocrats, while others accuse it of not respecting them. Some say it only portrays the side of Arab victims, while others disagree completely, saying that it talks with Israelis far too much. Al-Jazeera seems to be the network that no one likes but everyone watches.

Does Al-Jazeera really take its motto ("the one opinion -- and the other") seriously? It is unquestionably true that, unlike the state-controlled media in the Arab world, where censorship is standard, Al-Jazeera does not ignore other opinions. But it's also clear that the network has obvious biases.

For example, the network's sympathy for the protesters was clear in its reporting on the revolution in Tunisia and the current uprising in Egypt. When regime supporters attacked regime opponents in Cairo on Thursday of last week, a message periodically appeared at the bottom of the Al-Jazeera screen stating that the demonstrators had asked the army for "protection against a massacre."

But those who criticize Al-Jazeera for being too emotional and biased often forget that Western media are not immune from such things either: At about the same time Souag was talking, CNN correspondent Ben Wedeman sent out a Twitter message that a "government-sanctioned mass lynch" was "underway" in Tahrir Square.

People from more than 60 countries work at Al-Jazeera in Doha. "We have men and women, people on the right and the left, Islamists, pan-Arabists and nationalists," says Souag. He is proud of this diversity. Perhaps it is also a means of protection against too much partisanship at the network.

At Al-Jazeera the management decrees how the network is to refer to specific crises, as an "uprising," "intifada," "revolt" or "revolution." The current policy for the events in Egypt is to call them "popular protests". Of course this is discussed, says the news chief, "but then everyone drinks coffee together." He calls this the "spirit of Al-Jazeera."

Whether the network will have an impact on the Egyptian revolts similar to that in Tunisia is hard to say. It is clear, however, that as long as it assigns top priority to the protests, the Arab world as a whole will remain caught up in the excitement. Al-Jazeera shows Arabs what other Arabs are saying, without translation, without filters, unabbreviated and raw.

People throw themselves at the Al-Jazeera cameras and weep uncontrollably, curse, scream and beg their Arab brothers and sisters for help. "The fact that we have influence isn't a problem," Souag says, nonchalantly. "It just means that we have a special responsibility." 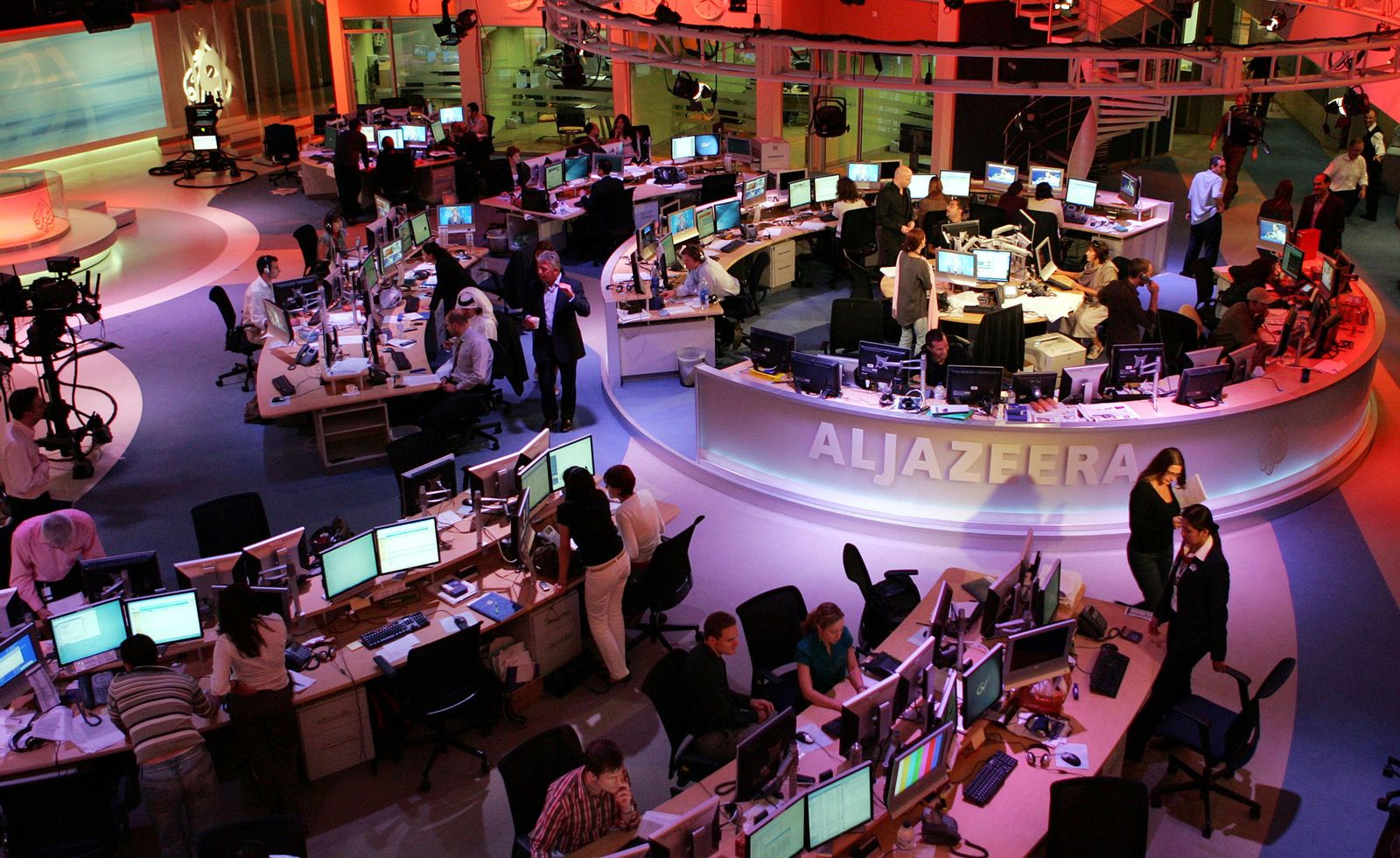 The wave of protests in the Arab world has highlighted the power of Al-Jazeera, which has unparalleled influence in the Middle East. This photo shows the English-language newsroom.