The dimensions of this frosty giant go way beyond human imagination. With a surface area spanning some 1.7 million square kilometers (656,000 square miles), a view of Greenland's ice above the Sermeq-Kujalleq glacier near Ilulisat makes it seem endless. The idea that this sheet of ice, which is up to three kilometers thick in parts, is melting seems absurd in the extreme. 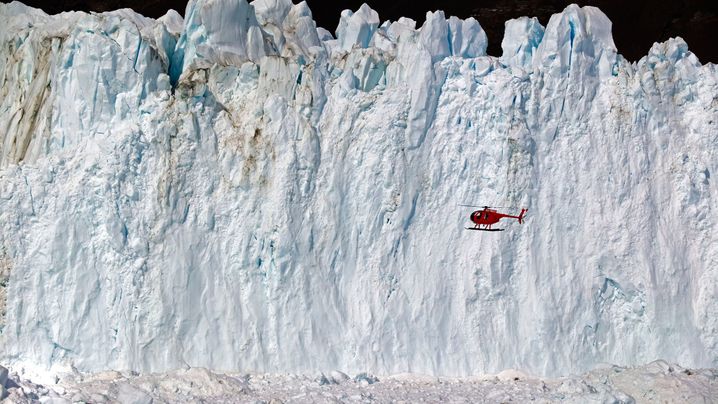 But the large number of gigantic icebergs -- and the valley into which they are slowly sliding -- tell a different story. Here, as elsewhere in Greenland, a gigantic upheaval is underway. In recent years, the glacier has receded by around 15 kilometers; the ongoing meltdown appears unstoppable. Just how quickly Greenland's ice is melting remains a matter of some debate, but the melting ice is contributing to rising ocean levels -- with potentially dramatic consequences for millions across the globe.

Were Greenland to lose all of its ice, sea levels would rise some seven meters higher than today's levels. Such a scenario will not become reality overnight -- indeed the process could last hundreds of years. But new results from a team of Dutch researchers suggest that conservative estimates as to the speed with which the ice is melting should be shelved. According to the study, the rate at which Greenland's ice is melting has accelerated substantially in recent years.

There are, strictly speaking, two parallel processes responsible for the ice's retreat. On the one hand, rising temperatures melt the ice on land while warmer ocean currents eat away at the glaciers that jut out into the ocean. A research team led by Michiel van den Broeke from the University of Utrecht reported in the most recent edition of the journal Science that the two processes are contributing equally to the disappearance of the ice sheet.

According to the new report, Greenland lost an estimated 1,500 gigatons (one gigaton is equal to 1 billion tons) of ice from the year 2000 to 2008. "That is at the upper end of recent estimates of Greenland mass loss using various other methods," van den Broeke told SPIEGEL ONLINE. Between 2006 and 2008, the loss in weight totaled 273 gigatons per year, he said.

The scientists are convinced their results are accurate because they arrived at their numbers using two fundamentally different methods -- both of which returned the same conclusion. On the one hand, they monitored the movement of the ice which they fed into a regional computer model. For a second data source, they used the Grace observation satellites, which measure the Earth's gravitational field.

In the period between 2000 and 2008, the dwindling glaciers have been responsible for the sea level rising by an average of about half a millimeter per year. However, during the last three years of observation, the value rose to 0.75 millimeters per year. According to the researchers, these results could indicate that the sheet of ice is melting at an accelerated rate.

It is, of course, possible that the period of observation represents merely a phase in the ongoing melt-off -- a phase that could end. But van den Broeke does not believe this to be the case: "Since 2000, the Greenland ice sheet has been loosing mass continually and at an accelerating rate, which fits our picture of a warming world."

"The scientific community is getting closer to reaching consensus on the size of the mass loss from the Greenland ice sheet," Denmark's chief glaciologist Andrea Peter Ahlstrøm told SPIEGEL ONLINE. He praised the recent study and the scientists involved: "It is a strong team of authors indeed, lending credibility to the results." From Ahlstrøm's point of view, these recent results will also prove helpful for the next report of the United Nations Intergovernmental Panel on Climate Change -- as they will enable scientists to describe the situation in Greenland with greater precision. In a 2007 report, the IPCC still had no accurate predictions for the fate of the gigantic mass of ice, because the scientists concerned could not agree amongst themselves.

But a lot has changed since then. This year, British researchers were able to indicate where the ice was disappearing fastest by using laser-altitude data from NASA's IceSat satellite. A team of scientists led by David Vaughan of the British Antarctic Survey assembled a total of 7 million data elements from Feb. 2003 to Nov. 2007, resulting in an image of unprecedented clarity. Almost all of Greenland's ice covered coastal regions -- in particular those in the south-east and north-west -- have seen rapidly melting ice. The scientists have especially noted the dramatic effect on fast moving outlet glaciers. Some of these effects are felt far inland as well.

'Give Us a Bit More Time'

A research team on the Greenpeace ship Arctic Sunrise including, among others, Gordon Hamilton of the University of Maine and Fiammo Straneo of the Woods Hole Oceanographic Institution, reported this summer that the unusually warm water in Greenland's fjords is to blame for the rapid retreat of glaciers.

Van den Broeke and his colleagues believe that not only will the ice disappear at a faster rate, but that the nature of the process will also change over time. According to the researchers, the rapid retreat of the outlet glaciers will be less important in the future, in comparison to the direct melting. Eventually, the glacier tongues will have retreated so far that the warm sea currents will no longer reach them.

It is still not clear when this might happen -- nor is it clear just how high sea levels might rise in the future. "We will use the same model to predict future Greenland mass loss, but you have to give us some time to come up with those results," van den Broeke said. To this end, the European Union last year launched a major research project called "Ice2Sea."

The researchers consider these new results to be an important signal to the climate summit in December. Many observers do not expect the meeting to bring about a particularly ambitious climate agreement -- much to the displeasure of van den Broeke: "All signs are pointing towards continued Greenland mass loss at rates we did not think possible ten years ago. Surely something to consider as a policy maker, I would say."