Cheerful images of chamomiles and violets adorn the Polish Facebook shop "Rumianki I bratki,” an e-commerce platform for natural cosmetics and, as the website promises, a touch of spring. "Remember – change is important. Could this be your moment?” reads an advertisement for a cream. "We are happy to help you take care of yourself!”

But there is nothing to buy behind the ad. Indeed, the entire shop is a fake. It is actually a place women can turn to should they be the victims of domestic violence. "We pretend to be a completely normal Facebook shop, but a crisis intervention team is sitting on the other side of the screen,” says Krysia Paszko, who developed the site together with a friend who is a graphic artist.

"Rumianki i bratki" looks like an online shop on Facebook. But it's actually a portal for women facing domestic violence and abuse.

If the team receives a query, the pretend saleswomen ask a number of questions: What is the condition of your skin? How does your skin react to alcohol? Do you need cosmetics for children? All of the questions are coded inquiries to help the intervention team determine if the woman, and perhaps her children, are in acute danger – if they are at the mercy of a violent, drunken partner. They want to know if immediate action is necessary.

The pandemic has forced initiatives combating domestic violence to get creative. Since the emergence of COVID-19, domestic violence has risen around the world, according to UN Women. Many countries have set up hotlines and expanded pre-existing services – but such efforts aren’t all that helpful in situations where women live together with their tormentor and can't speak on the phone in private.

Lockdowns have made things even more difficult, increasing stress levels and further limiting women’s freedom of movement. Furthermore, abusive men often read their partner’s telephone messages and emails – and some women don’t even have their own mobile device. Organizations and initiatives around the world have thus come up with code systems – such as fake online shopping platforms – to secretly offer help to domestic violence victims.

Women in Poland protesting against domestic violence. They want better protection from the government.

Warsaw native Krysia Paszko, who was 17 years old at the time, learned in April 2020 from the news of rising violence in Europe, with incidents of domestic abuse also climbing in Poland as a result of the lockdown. When she heard that pharmacists in France call the police when women order a "mask 19,” a codeword used in the country for domestic violence, Paszko came up with the idea of setting up a fake internet shop.

Soon, though, her Facebook site began receiving so many messages that Paszko was no longer able to deal with all of them herself. Her search for assistance led her to the experts at the Warsaw women’s rights organization Centrum Praw Kobiet. A number of volunteers also joined her cause. Together, they help Paszko maintain the site and separate real calls for help from messages from people who are actually interested in the products purportedly on offer. Trained women psychologists are on hand to communicate with those in need. Thus far, more than 300 people have turned to the platform for help.

When a "customer” uses certain codewords in discussions with the psychologist, orders a product and provides her address, the counselor calls the police. Sometimes, they help find an alternative solution. For one woman, the Centrum Praw Kobiet sent a taxi to collect her and her child and provided them shelter until they could move to her parents’ place. She simply hadn’t seen any other way to get away from her husband, and she had no money of her own.

In South African townships, a pastry named "koeksister" has become a codeword for domestic violence.

There are many initiatives similar to Paszko’s around the world. In Colombia, activists urge women to get in touch via social networks or WhatsApp using the codeword "VendoMaquillaje” ("I’m selling makeup”). The Colombian organization Nosotras Hablamos has urged victims of domestic violence or sexual abuse to "write to us if you are isolated with your tormentor and he hurts you. Ask us to send an eyeliner to your home and give us your address.” The network, which includes more than 100 women, then notifies the authorities.

The collective Proyecto Fem Reynosa in the Mexican border town of Reynosa also acts as a link between domestic abuse victims and the police, notifying the authorities when somebody inquires about a certain lipstick. "In the pandemic, many of the large factories here on the border have had to close down. A lot of people have lost their jobs,” says team member of the collective. "Women were locked up day after day with their brutal partners, who grew increasingly aggressive.” The collective doesn’t just notify the police. It also helps women file charges and provides them with legal and psychological assistance.

Even donuts have a role to play in the battle against domestic violence: In the poverty-stricken communities of Cape Flats, an area located just outside of the South African metropolis of Cape Town, the sticky-sweet confectionary known as "koeksisters” are quite popular. Caroline Peters and the others from the Cape Flats Women’s Movement communicate with endangered women via WhatsApp by negotiating feigned koeksister deals.

They ask their "customers” periodically if they want to buy more of the pastries, with a negative answer being a sign that the situation has improved. "But if somebody asks how expensive the donuts are, I know that I have to intervene immediately,” says Peters. The Movement keeps a database containing the addresses of township residents who face abuse so that they can respond quickly in an emergency and notify the police.

Sometimes, though, Peters arrives well ahead of the authorities. Police in South Africa still tend to view domestic and sexual violence as a private problem. Plus, their presence in the poverty-stricken townships, which are largely under the control of street gangs, is fairly limited anyway.

Pharmacists are able to provide immediate assistance to victims of domestic violence.

The use of codewords to assist victims of domestic violence is something of a balancing act. For the system to work, women must be aware of them. But if they become too well-known, perpetrators of such violence could learn of them. In South Africa, Peters has already developed new codes for communication with women.

The digital initiatives can be an important tool for reaching victims of domestic violence at home – even once the pandemic has faded. But in many countries, such online methods primarily reach a younger demographic. Because not all women have access to the internet, domestic violence experts are calling for easy-to-use offline solutions such as the "mask-19” initiative in France. Indeed, the French codeword has since expanded to parts of Spain, Argentina, Colombia and Germany.

The German chapter of the women’s rights organization Zonta International is seeking to expand services here as well. "The short, easy-to-remember codeword "mask 19” is about quickly getting victims the help they need without having to talk about a traumatic situation,” says Karin Lange, spokeswoman for the Union of German Zonta Clubs. She says that around 150 pharmacies and 120 doctor’s offices in several German states have already agreed to take part. But when compared to Spain, coverage in Germany is rather limited. There, women can get help in 16,000 pharmacies by ordering a "mask 19.” 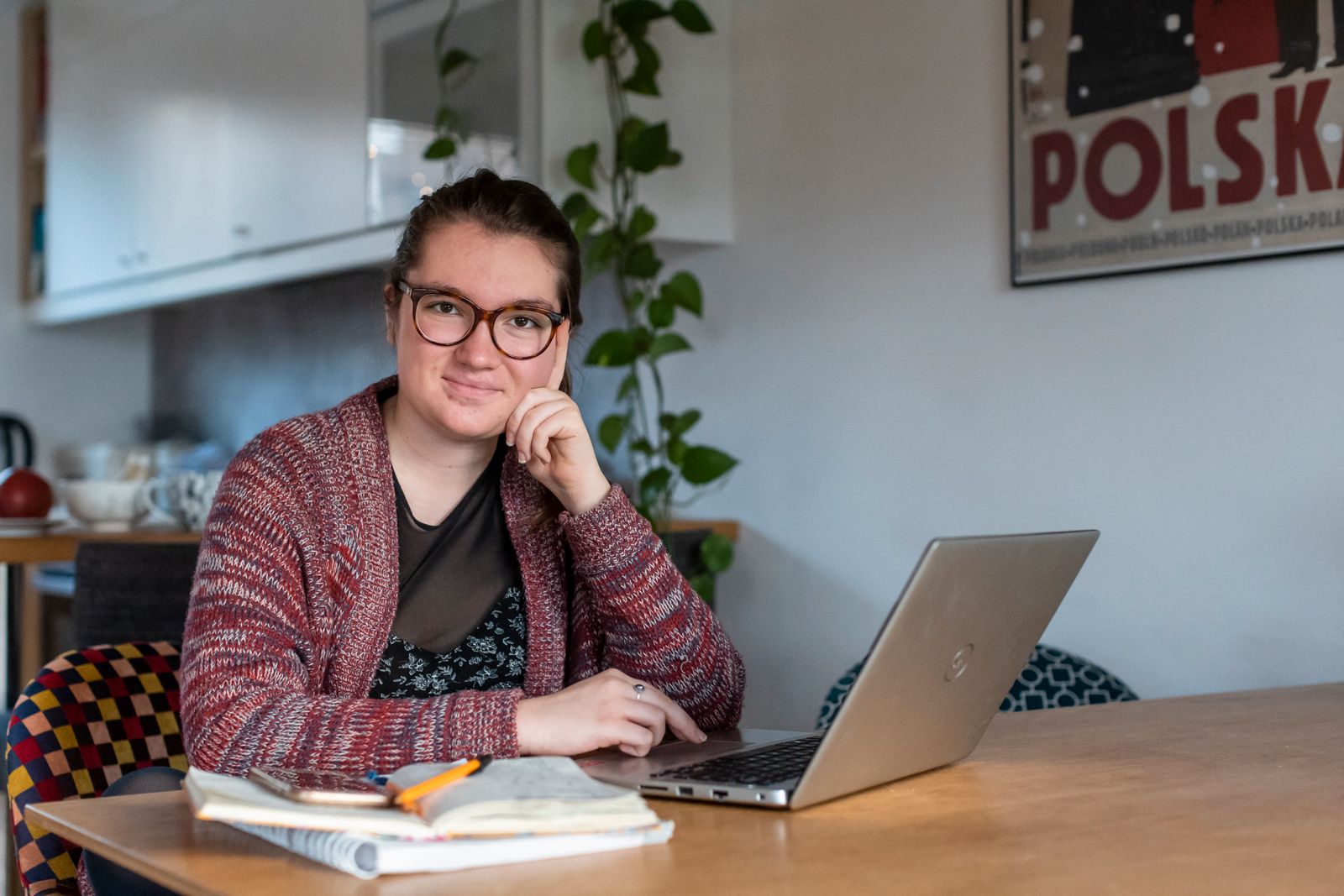 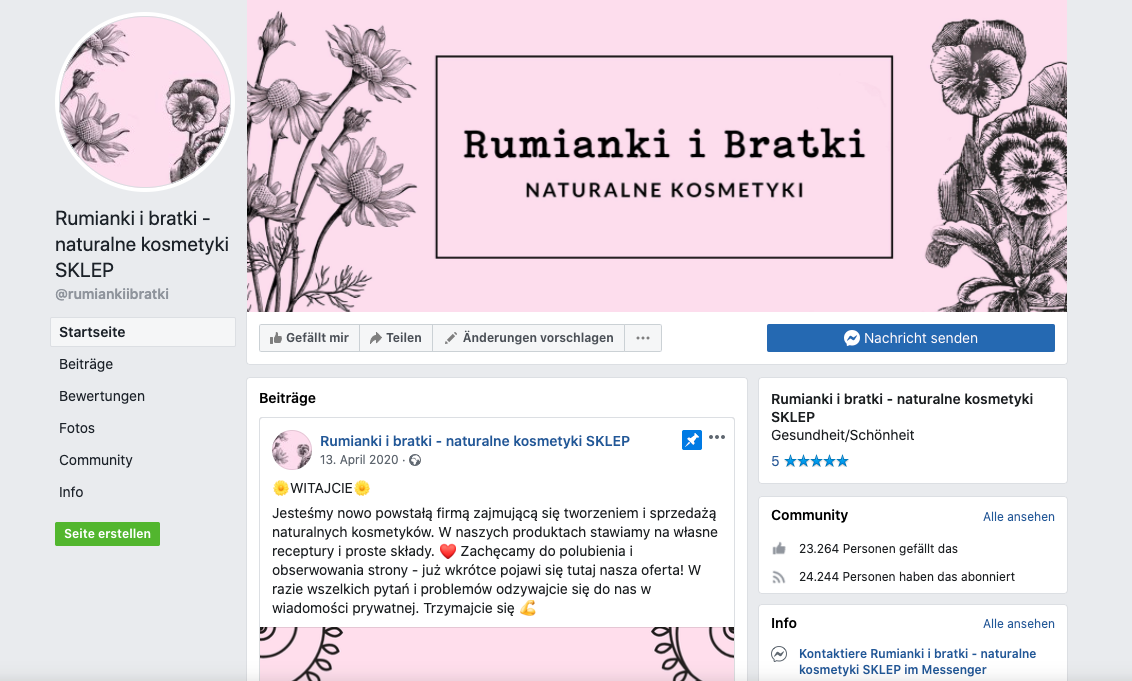 "Rumianki i bratki" looks like an online shop on Facebook. But it's actually a portal for women facing domestic violence and abuse. 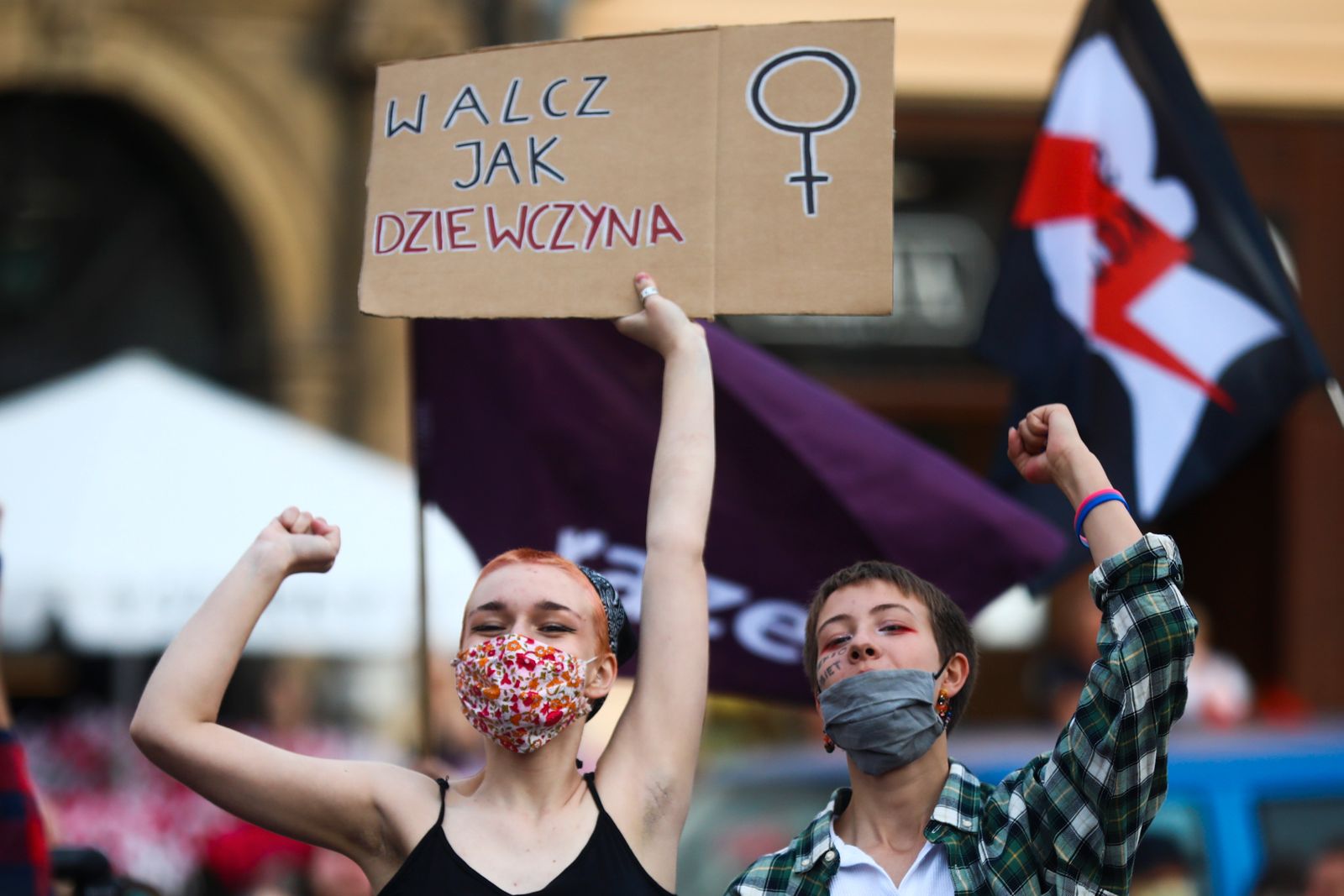 Women in Poland protesting against domestic violence. They want better protection from the government. 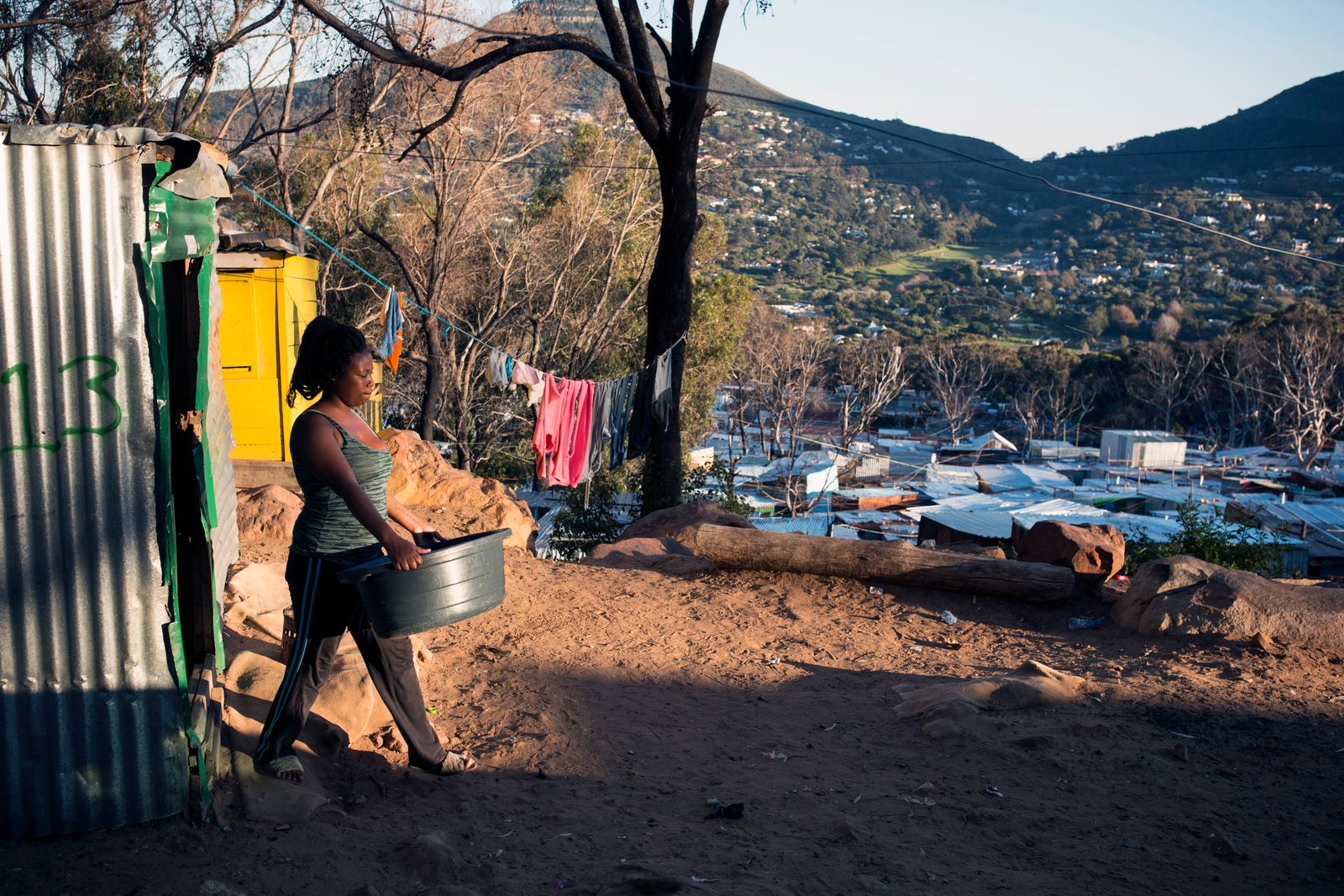 In South African townships, a pastry named "koeksister" has become a codeword for domestic violence. 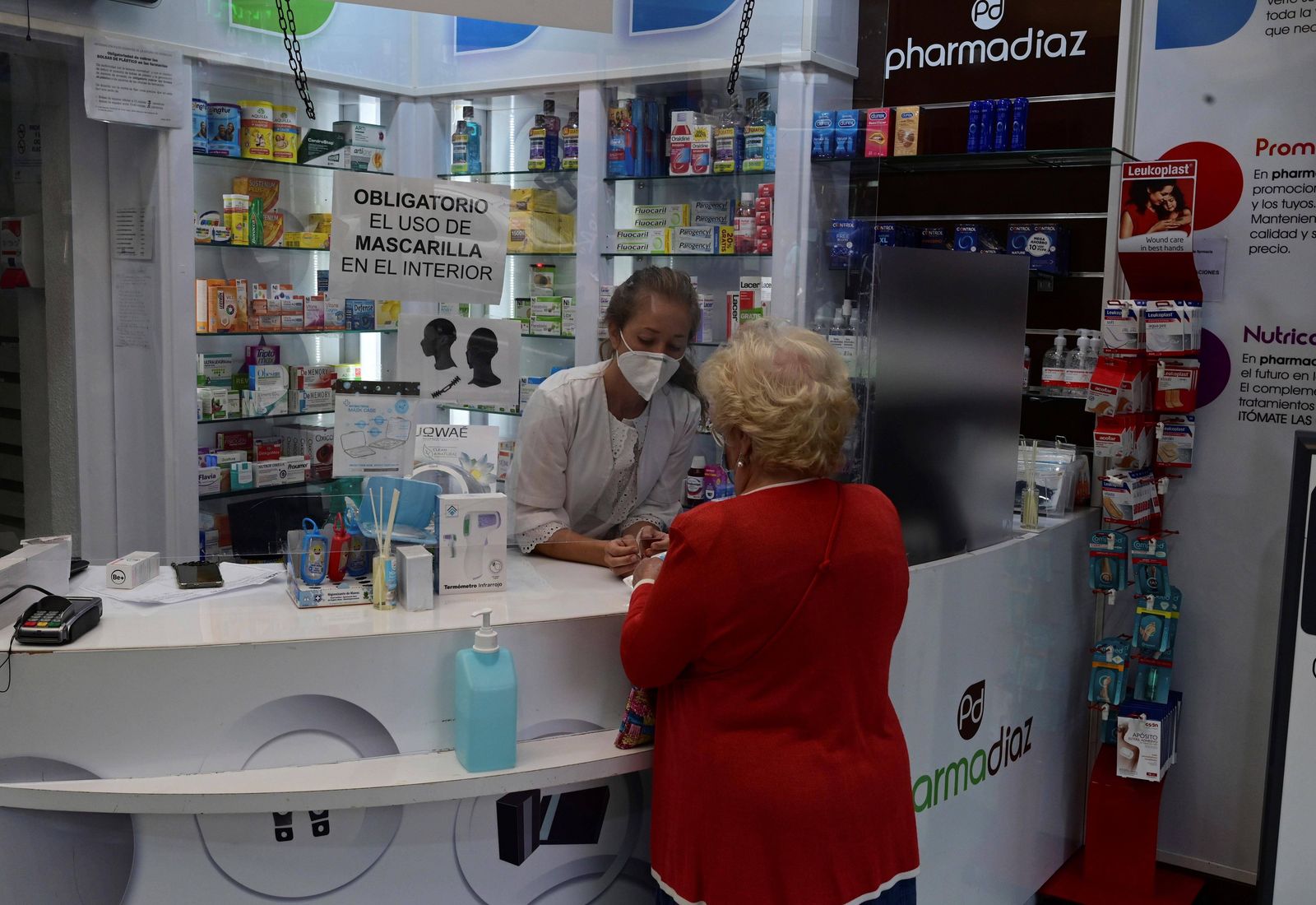 Pharmacists are able to provide immediate assistance to victims of domestic violence.