The cell is only a few square meters in size and there are no windows. A mattress lies on the floor; a hole in the floor for prisoners' needs, cynically called a "Turkish toilet" is next to it.

Mohammed Othman has been held in Kishon Detention Center in northern Israel for almost a month. But neither he nor his lawyer knows exactly what he is being accused of. Othman is locked up as an administrative detainee -- called Maazar Minhali in Hebrew -- and is one of around 335 Palestinians currently in the same position. 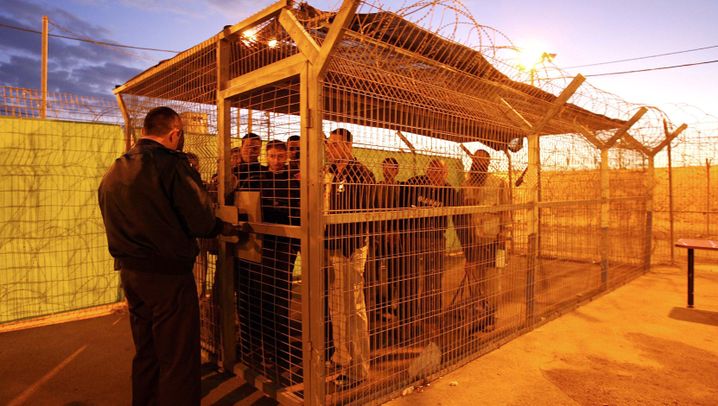 According to a report from the human rights organization B'Tselem, more than a third of such administrative detainees remain behind bars for longer than six months, a further third longer than a year. Eight percent stay locked up for at least two years. The Israeli army has confirmed the numbers, but emphasizes that they have been dropping in recent years.

Nevertheless, the practice is problematic for a democracy such as Israel's. Military judges decide if the detention will be prolonged -- and for the most part they merely rubberstamp the motions filed by the military attorneys, who, for their part, received information from Shabak, Israel's domestic intelligence agency. The allegedly incriminating evidence is not shared with the detainees or with their legal representation.

The material is secret and cannot be shared with the accused due to "security concerns," an Israeli army spokesperson said. He acknowledged, however, that such military hearings "are without a doubt subject to error." In other words, one cannot speak of a fair trial.

The Salem military court in the northern part of the West Bank has already extended Mohammed Othman's detention three times. According to Israeli law, it is possible to imprison a Palestinian for 90 days without charge. And a judge in a military court of appeal can extend that period of detention for another 90 days.

The latest hearing in the Othman case was on Monday of this week. While Judge Eliahu Nimni did not give the intelligence agents the 23 days they had asked for to interrogate their prisoner, he did rule that the detention be extended by 10 days. After hearing Othman's lawyer's testimony, Judge Nimni said that these 10 days were necessary to clarify the "suspicions" against the Palestinian. Letting Othman go would be a security risk, he said.

The organization Addameer arranged for Othman to have a lawyer represent him. The 33-year-old complained to his attorney about the terrible conditions in prison, and said he was interrogated for hours at a time. On one occasion, Oct. 15, he was grilled from 1:45 p.m. until 1:20 a.m. When Othman fell asleep on his chair out of exhaustion, his interrogators poured water over his head, he says.

Othman still doesn't know what he is being accused of. He told his lawyer that he has not been confronted with any concrete dates, names or events. What do they have on him? SPIEGEL ONLINE tried to find out from the domestic intelligence agency. "We cannot fulfil your request," came the written reply. A telephone enquiry to ask how this lack of transparency could be compatible with the rule of law met with the reply by a spokeswoman: "It is all going according to law and order. Trust us!"

A number of Western embassies have had similar experiences. Sweden, which currently holds the six-month rotating president of the European Union, wasn't even able to obtain a reason for the arrest. Sweden and other countries filed a protest.

The Israeli army stated that administrative arrests target terror suspects. But in the Othman case, that is highly doubtful. He was arrested on Sept. 22 as he attempted to travel over the Allenby Bridge from Jordan into the West Bank. He was returning from a visit to Norway where, among others, he met with Norwegian Finance Minister Kristin Halvorsen.

Several Western diplomats have vouched for his innocence. Othman is known for his strict policies of non-violence. In his hometown of Jayyous, he has organized protests against the construction of the security fence with which Israel is attempting to protect itself from terrorists. Othman and other activists have focused their protests against the route of the security fence, for which the Israelis have expropriated land that belongs to the Palestinians in Jayyous.

The fact that the Israelis have nabbed a supporter of non-violent protests has enraged some Western diplomats. "Many Palestinians are interpreting this as a sign that Israel doesn't even respect peaceful protests," a foreign observer said.