After Afghanistan’s erstwhile president, Ashraf Ghani, fled abroad in the face of the Taliban’s advance into the capital of Kabul, First Vice President Amrullah Saleh, 48, headed for the Panjshir Valley. Two days later, he declared himself Ghani’s legitimate successor.

Saleh, together with the son of folk hero Ahmad Shah Masoud, who was assassinated 20 years ago, is now using the valley as a base from which to organize the resistance against the Islamists in Kabul. Concurrently, talks are underway in Kabul between members of the former government and the Taliban.

Afghan embassy staff hanging a portrait of Afghan First Vice President Amrullah Saleh, who declared himself the "legitimate caretaker president," on the wall at the embassy in Dushanbe, Tajikistan.

Foto: EMBASSY OF THE ISLAMIC REPUBLIC / via REUTERS

Saleh has now sent DER SPIEGEL reporter Susanne Koelbl, whom he knows from previous encounters, a handwritten letter via WhatsApp, "for security reasons,” as he writes. Telephone calls are too dangerous due to the risk of being traced. Over three pages, Saleh recaps the collapse of the Ghani government, predicts the collapse of Taliban rule and calls the U.S. "naïve.”

For security reasons, I wouldn't be prepared to answer your questions line by line.

The NATO / US presence in Afghanistan had the legitimacy sanctioned by the UN. It was a UN mandate presence since the time of ISAF.

There is always a need to sit back and reflect on what went wrong. Unfortunately, I don’t have that luxury right now. The Doha process, which was never a process, was the beginning of (the) end. It was flawed, deceptive and foolish.

(US special envoy for Afghanistan Zalmay) Khalilzad bypassed the Afghan state and gave legitimacy to the Talibs. For Pakistanis and the Talibs, Doha was an instrument of deception to keep the international community divided, hopeful to peace and not allow them to condemn the Taliban campaign of terror. They never believed in political settlement. They exploited the naïveté, fatigue and short-sightedness of the White House, both under Trump and Biden.

The United States and NATO could (have born) the cost, which had declined to (a) minimum, and sustained the 2,500 troops. They didn't. Now they pay with their reputation, credibility, and global standing. I’m not sure they get it.

"We are here to defend the values, the dignity of Afghan humans."

However, there is still a solution. Threaten Pakistan with specific sanctions, demand political settlement and gave recognition and political support to the National Resistance in the Panjshir.

For us, it isn't about the number of troops and fighters, it is about our political will, determination and acceptability of our narrative and story. We are here to defend the values, the dignity of Afghan humans - to fight for the right of girls and women to be themselves rather the shadows of men without identity. We are here to defend Afghan pluralism and diversity. We are in the Hindukush, in the Panjshir, but our fight is for Afghanistan.

We are motivated, in high spirits, in the center of history. We have a cohesive political set up. With these invaluable strengths, the factor of resources loses centrality. We need resources, no doubt. But first and foremost it is a fight and battle of wills.

"Ghani fled and betrayed his own soul and proved himself wrong."

Former President Ghani (could have) stayed on and answered the call of the soil. Even if the Taliban had captured him, his body would be in jail and his soul would be free. Now his body is free. His soul is chained forever until the end.

He could still be a reason for the international community to demand accountability from Talibs. He fled and betrayed his own soul and proved himself wrong. Patriots pay the ultimate sacrifice.

If Talibs agree to give us a timeline on when and how they engage the Afghan public, the masses in decision-making, we are ready to enter into sincere and serious negotiations. The character of the state. (The) mechanism for choosing (the) head of state.

(That is) the agenda. I don't recognize their Emirate and will never do. A deal for surrender in the name and under the disguise of settlement won't happen. Best confidant.

If they opt for (a) military solution, it is their choice, and we are ready for every eventuality. We are in the Hindukush, but we stand for Afghanistan.

Geographically we are isolated, but politically and morally Afghanistan is with us and won't ever become Talibanistan.

(Editor's Note: This letter was written in English. Minimal changes have been made for readability.) 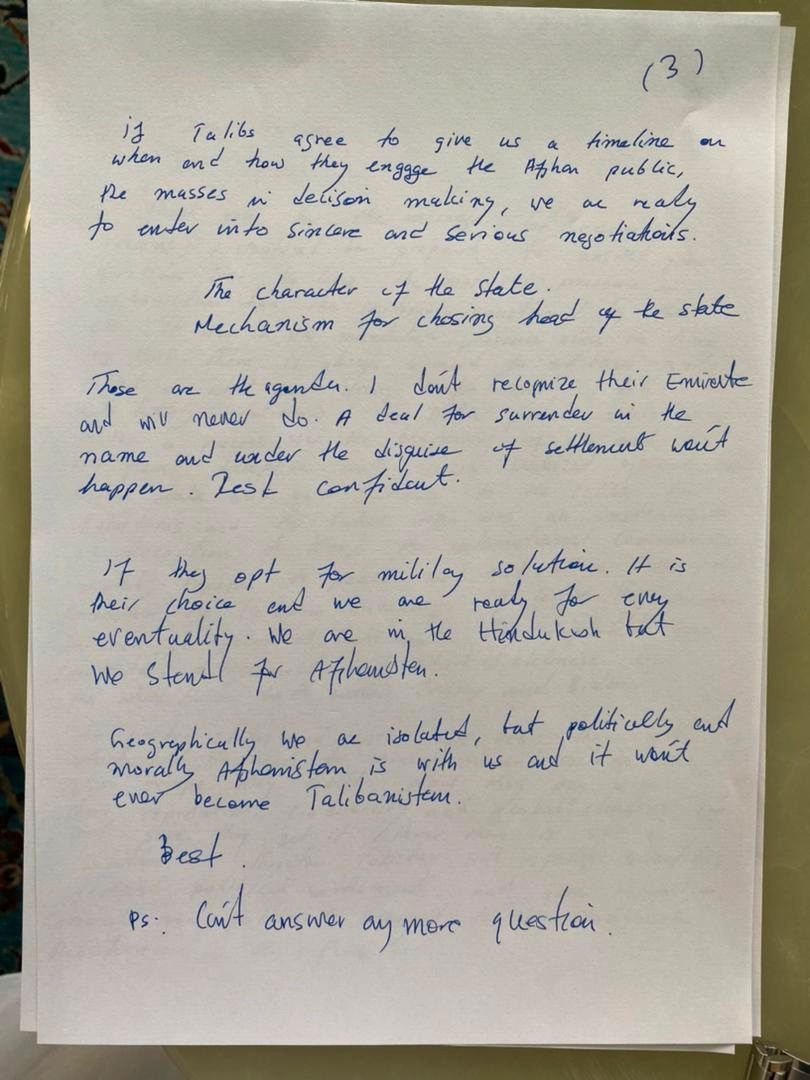 A photo of the letter Saleh sent to SPIEGEL 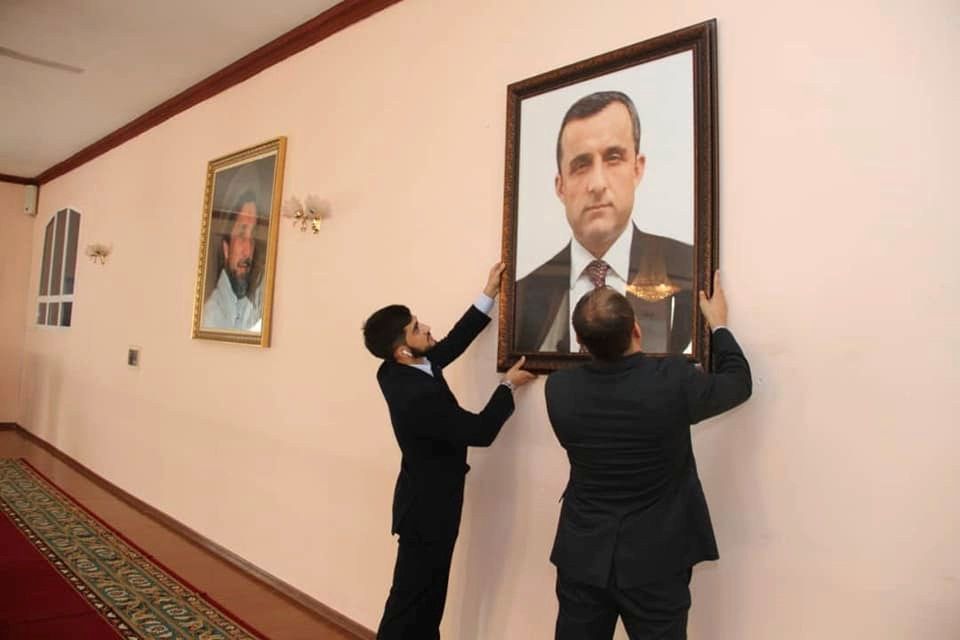 Afghan embassy staff hanging a portrait of Afghan First Vice President Amrullah Saleh, who declared himself the "legitimate caretaker president," on the wall at the embassy in Dushanbe, Tajikistan.

Foto: EMBASSY OF THE ISLAMIC REPUBLIC / via REUTERS 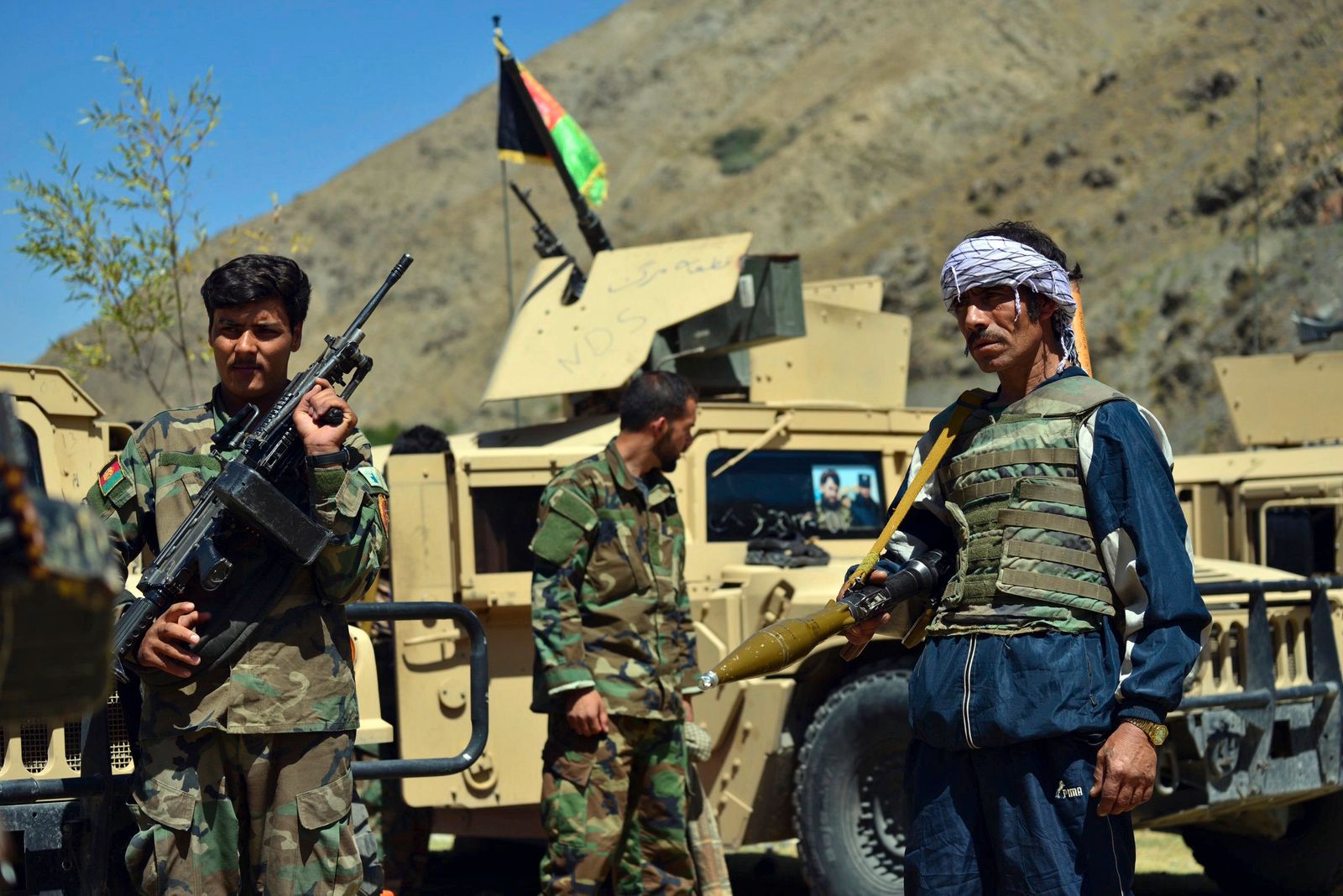 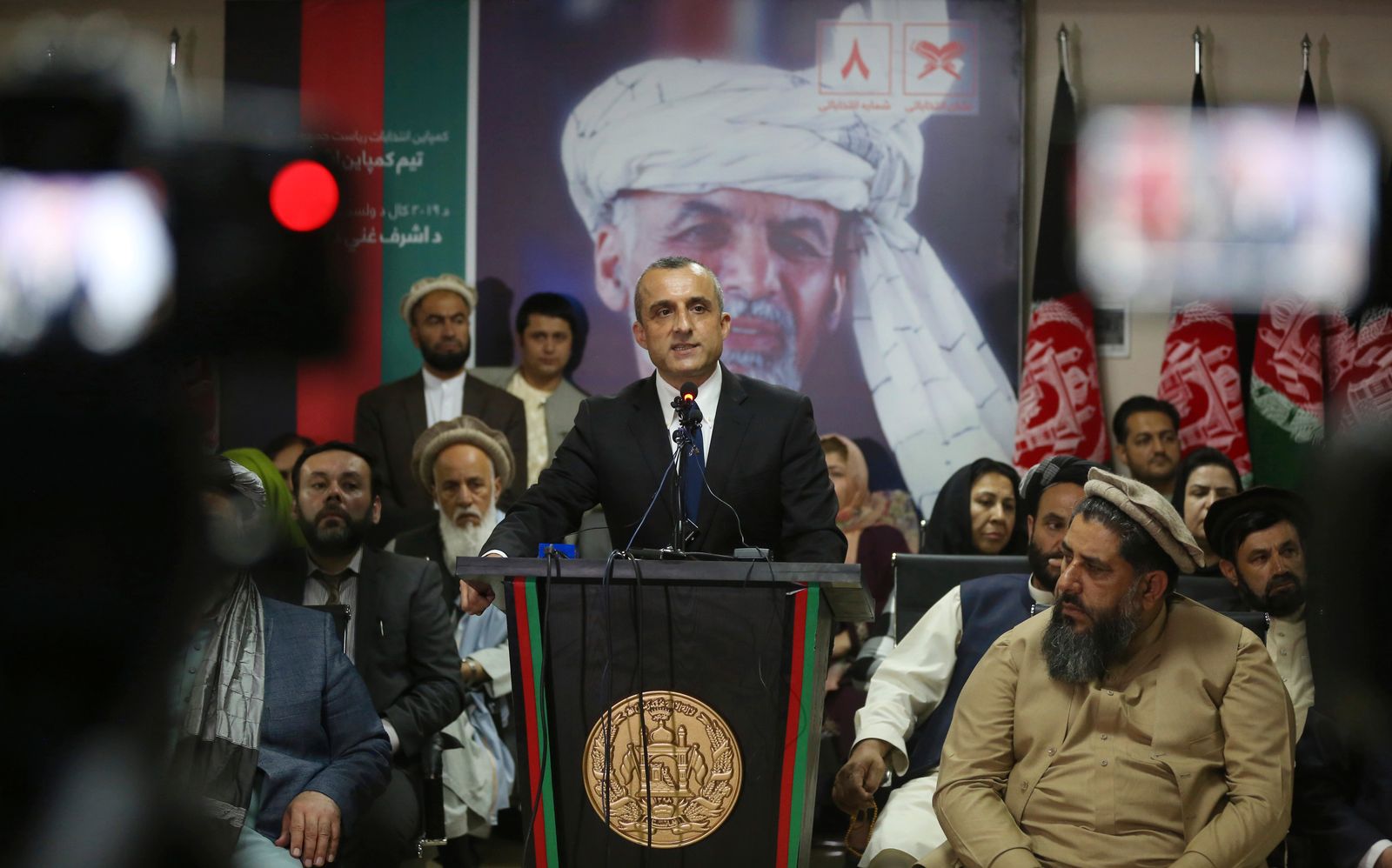 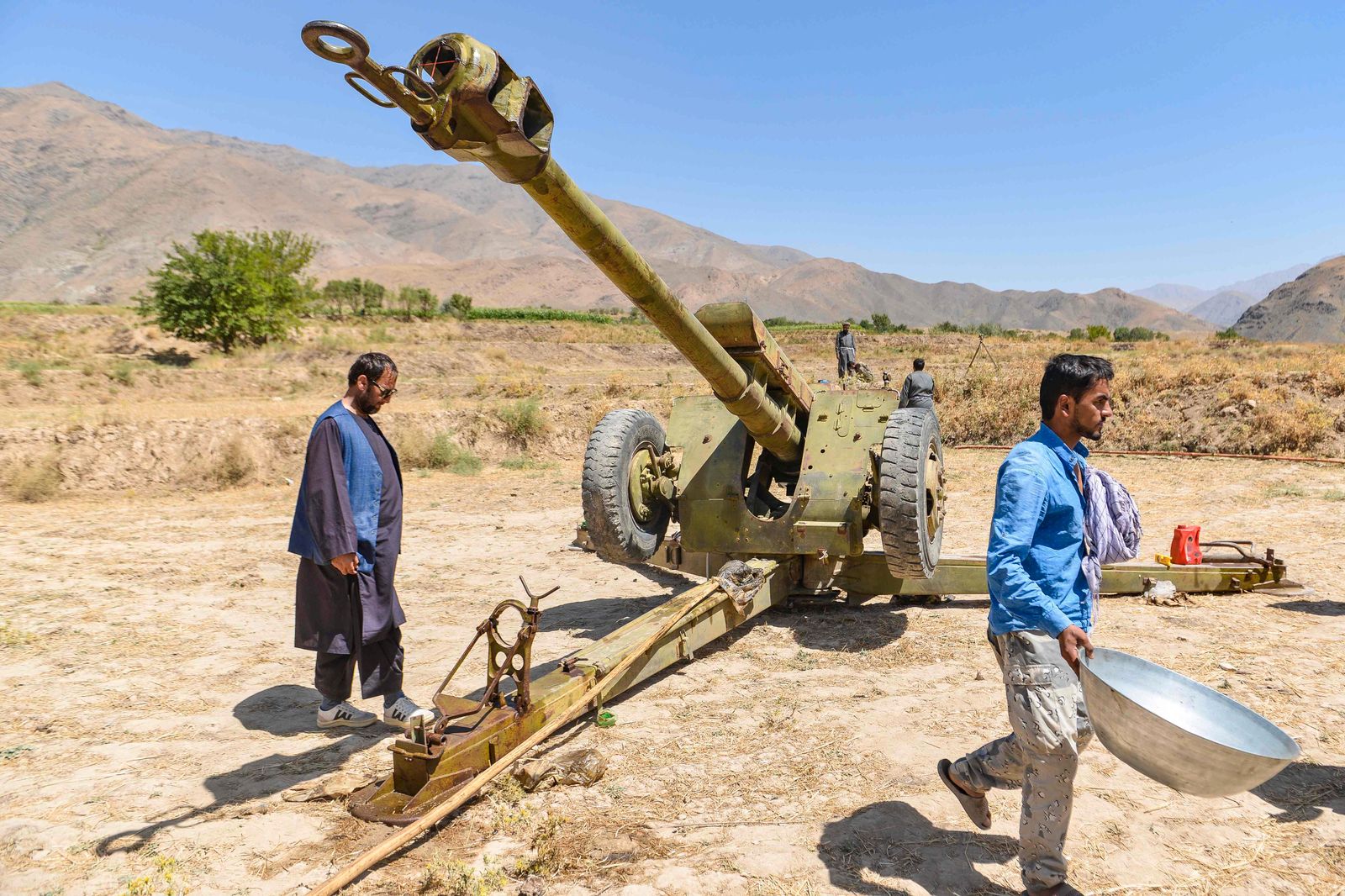