Hamid Karzai made an unintentionally comical remark at the beginning of Thursday's eight-hour Afghanistan conference in London. The Afghan president said that he was certain that the conference would be "another very important meeting" for the future of Afghanistan. Karzai's words brought a smile to the faces of some members of his audience, because it was a reminder of how many Afghanistan conferences had already taken place during eight years of war -- and of the fact that the grand promises of these summits usually petered out afterwards.

Nevertheless, the meeting's host, British Prime Minister Gordon Brown, set the bar high. In his opening remarks, he spoke of a "decisive time" and said that the conference marked the beginning of "Afghanization" -- a term used to describe the gradual transfer of responsibility from the International Security Assistance Force (ISAF) to the government in Kabul. The new Afghan security forces would assume responsibility for the country's security "district by district and province by province," Brown said.

Karzai said that he expects the Afghan government to be standing on its own feet by 2014. Until then at the very least -- and this was the second message of the London conference -- international troops will have to remain in the country.

For this reason, it is premature to talk about the prospect of withdrawal. Instead, the meeting was just another day full of calls to stay the course. One of the summit's goals was to counter the fatalism that has taken hold in the war-weary ISAF nations. The attendees, around 70 foreign ministers and representatives of international organizations, confirmed the "strategic new beginning" which had been sketched out in the days leading up to the meeting and which is supposed to bring about a turning point in the war after a bloody 2009. The mood was "hopeful," members of the German delegation said.

The core of the new strategy involves reaching out to Taliban fighters. A new €360 million ($500 million) program is designed to encourage ordinary foot soldiers to lay down their weapons and accept civilian jobs instead. The strategy is based on the idea that three-quarters of the Taliban are not religious fundamentalists, but simply underemployed young men. The goal of the internationally financed job creation scheme is to lure them away from the battlefield. But opinions are divided over the effectiveness of such programs.

Karzai said it was time to "reach out to all of our countrymen, especially our disenchanted brothers who are not part of al-Qaida." He pledged to call a jirga, a traditional Afghan gathering, to discuss a peace process. Under the new approach, talks with representatives of the Taliban leadership would also no longer be taboo in the future, provided they laid down their weapons and pledged to uphold the Afghan constitution. Insiders said the reconciliation process would be "all-inclusive." The Taliban, however, have rejected talks as long as foreign troops remain in the country.

The new openness toward the Taliban stems from the realization that ISAF cannot defeat the Taliban militarily. Indeed, it is a victory of the proponents of realpolitik over the idealists. US Special Representative Richard Holbrooke said the approach was long overdue.

Human rights activists, on the other hand, are critical of the plan, saying that the West is retreating from the ideal of justice. The sudden rehabilitation of senior Taliban leaders is "alarming," Kabul-based human rights activist Guissou Jahangiri wrote in the Independent. According to Jahangiri, while it may appear to be the easiest solution at the moment, freedom and democracy can only be achieved in the long term on the basis of justice. She cited as examples the way Germany dealt with its Nazi past and South Africa's Truth and Reconciliation Commission.

There are many who share such moral concerns, particularly in the United States. In London, US Secretary of State Hillary Clinton stressed that the discussion of women's rights must figure prominently in any peace process.

While the details of the reconciliation process are still unclear, the next steps are to be discussed and resolved at the jirga and at an international follow-up conference in Kabul in the spring. Earlier this week, NATO's new top civilian representative in Afghanistan, Britain's Mark Sedwill, said that "some pretty unsavory characters are going to have to be brought within the system." But at the press conference following the London talks, Afghan Foreign Minister Rangin Dadfar Spanta said that the goal was not to share power with the Taliban.

Over the years, Karzai has made a lot of promises but has fallen short when it comes to implementing them. Whether new control mechanisms will lead to any significant changes remains to be seen.

The most important aspect of the conference, however, was not the resolutions it produced but rather its psychological impact. The international community is in urgent need of a boost to its self-confidence. Brown, playing the role of a cheerleader, said unity would lead to success. He thanked German Chancellor Angela Merkel twice for her decision to send up to 850 additional troops to Afghanistan and to contribute €50 million to the program to reintegrate Taliban fighters. Clinton also thanked the Germans for pledging the additional troops. The German delegation seemed pleased over the words of praise coming from both leaders. The commander of ISAF, General Stanley McChrystal, tried to offer words of encouragement with a prediction that the Taliban would be weakened significantly by the autumn.

But this, too, like the implementation of Karzai's various promises, remains to be seen. A true spirit of optimism is unlikely to emerge in this war again. Instead, all future Afghanistan conferences will probably focus on how to carry out an orderly withdrawal from the Hindu Kush. In this sense, London was perhaps indeed a turning point after all. 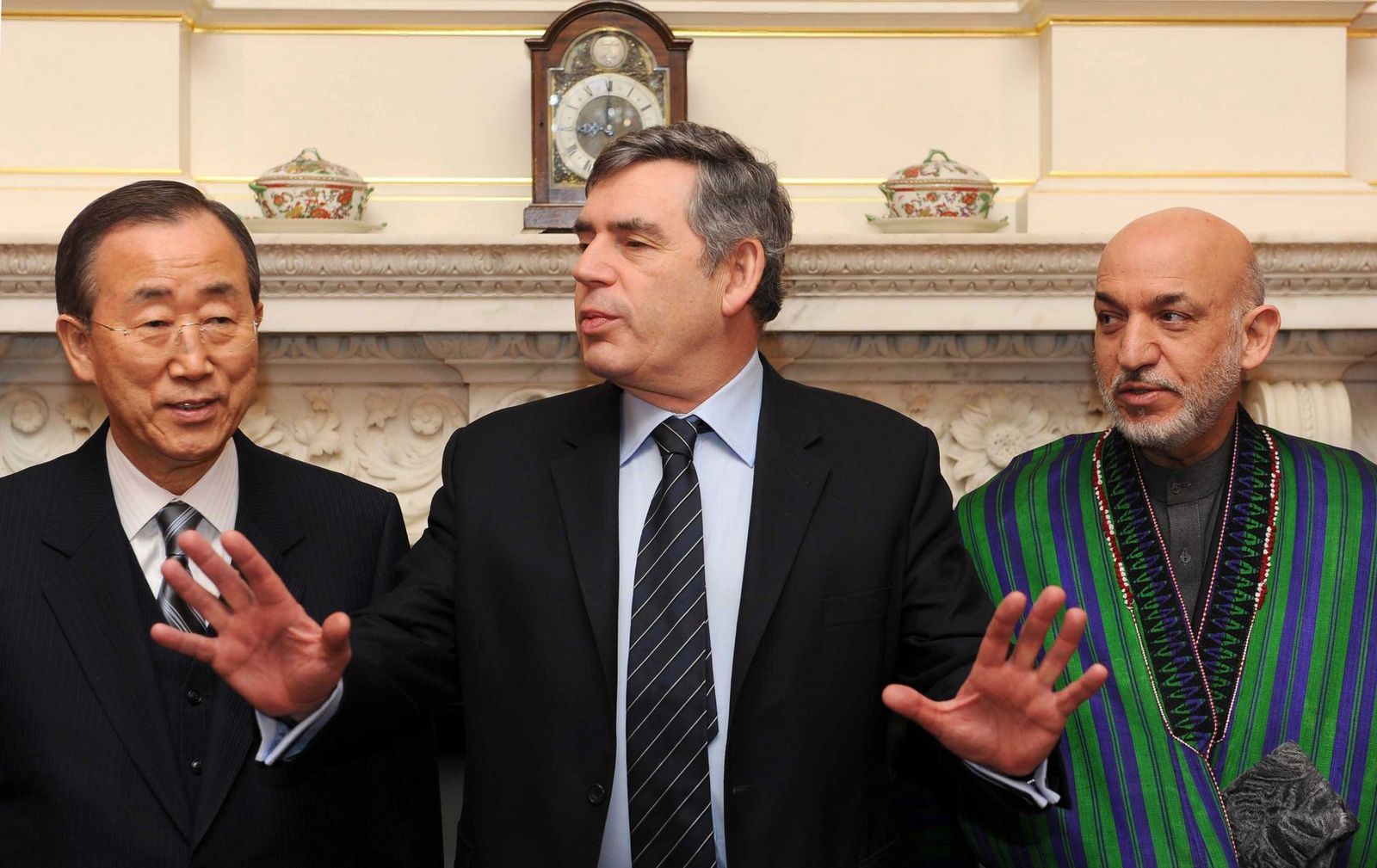