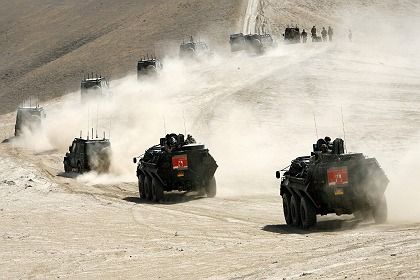 SPIEGEL ONLINE: Policy-makers in the US and Europe are shocked by the gloomy Pentagon assessment for Afghanistan. You, however, are pleading for more optimism. Why?

Shapiro: There is ample reason for gloom, but we need to keep in mind that in the best of circumstances, Afghanistan is a long-term mission. We are talking about a committment of 10 or 20 years. I believe we have fundamentally the right strategy in place, but even if that is so it will take some time to show progress. I dont believe we need the major review people are talking about.

SPIEGEL ONLINE: Everyone seems to be asking for more troops in Afghanistan, though. President George W. Bush, John McCain, even Barack Obama.

Shapiro: More soldiers could be put to good use there, but they wouldnt fundamentally change the situation. Let's assume we would send in 10,000 more, as is contemplated: They could improve the local situation in a few areas for a time, but they would not rectify the problem of the Pakistani border areas and their ability to infiltrate insurgents into Afghanistan. As long as we don't solve that problem, you could put 100,000 soldiers into Afghanistan and you would still have asymmetric attacks in various parts of Afghanistan and a rate of civilian and military casualties similar to the current one. And I have not yet heard viable suggestions on how to deal with the problem of the Pakistani border areas.

SPIEGEL ONLINE: But isn't it understandable that security is paramount to people in Afghanistan?

Shapiro: Of course, but we cant solve that problem simply by increasing forces. Achieving overall security in Afghanistan will be a slow process and unfortunately we will have to tolerate violence in the country for a long time. The insurgents are not winning in Afghanistan -- they have no capacity to stand toe-to-toe with Western forces or the Afghan National Army. Their ideology is bankrupt and they are unpopular in the country. The real problem is the lack of civilian capacity in the international forces, corruption, and the dearth of effective Afghan governance capacity and security forces. These are actually harder issues to address than troop levels, but they must be tackled. Relatively speaking, the military part is actually in fairly good shape.

SPIEGEL ONLINE: Then why is the debate so focused on a possible troop increase?

Shapiro: In political circles, we tend to avoid discussing the really tough issues -- such as government reforms in Afghanistan. Instead we do what we know: We throw more military forces at the problem. But what we really need is patience. That is something we have in very short supply in North American and European capitals. The current counter-insurgency strategy in Afghanistan is not a bad one. It takes time but there are signs of progress. Just look at the state of the Afghan National Army. Nearly everybody I talked to in Afghanistan raves about the army. It is adding about 4,000 people a month. They have not lost an encounter with insurgents since April of last year.

SPIEGEL ONLINE: That means the current debate on troop increases is wrong-headed?

Shapiro: I have mixed feelings about the debate. More attention for Afghanistan is certainly a good thing. But the debate seems too influenced by comparisons with the surge in Iraq. There, increase in troops indeed dampened the violence. But if you look closer, one could observe in Iraq not just an increase of US troops but also a change of military strategy and a switch of tribal loyalties. The situation is simply not comparable with Afghanistan.

SPIEGEL ONLINE: So would you advise Europeans to reject American demands for more troops?

Shapiro: Beyond the number of total Western forces in Afghanistan, there is also a trans-Atlantic question here. How should the trans-Atlantic partners share the burdens of the mission that has UN approval, that flies the NATO flag, and that is supported by the vast majority of Afghans? Currently, the balance of commitment is skewed. If Europeans dont address that imbalance, the United States will probably continue to fill the gap. This would not be a disaster for Afghanistan, but it might be for NATO.

SPIEGEL ONLINE: Would there be enough public support from Americans who are simply tired of the war effort?

Shapiro: Yes. Afghanistan is, unlike the Iraq invasion, a very bipartisan war. It is still very popular in the US -- and there is a growing feeling that the conflict has been neglected.