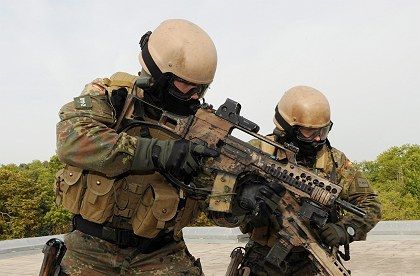 German Foreign Minister Frank-Walter Steinmeier is calling for his country to end its participation in the United States-led "Operation Enduring Freedom" anti-terror mission in Afghanistan. SPIEGEL reported over the weekend that the foreign minister wants to withdraw Germany's KSK elite forces from Afghanistan.

With his proposal, Steinmeier -- who is the center-left Social Democratic Party (SPD) candidate for chancellor in the 2009 elections -- could trigger a new conflict within the grand coalition government, where the SPD is the junior partner of Chancellor Angela Merkel's conservative Christian Democrats.

Up to 100 elite German Special Forces (KSK) soldiers have been stationed in Afghanistan since 2001 as part of Operation Enduring Freedom, but during the past three years, they haven't been deployed "a single time," Steinmeier told SPIEGEL. "That's why the KSK element should be taken out of the OEF manadate, which is set to be extended in November," he said. Steinmeier justified his position by noting that it comes at the same time that Germany is planning to increase the number of troops it has participating in the ISAF stabilization forces. That force, he said, is "clearly" Berlin's "primary focus." This week, Germany's parliament, the Bundestag, is expected to debate a proposal to increase the number of German troops deployed in Afghanistan by 1,000 soldiers to a total of about 4,500. "You cannot just keep piling elements on without taking a critical look at our current responsibilities," he said.

Steinmeier said he had already discussed the issue with Merkel and Defense Minister Franz Josef Jung, but so far the Christian Democrats haven't made any firm decision. If Germany were to pull out of Enduring Freedom in Afghanistan, it could also draw criticism from Washington. Still, Steinmeier is likely to find support in the left-wing base of the SPD, where politicians have long criticized German involvement in the anti-terror mission.

As a gesture of goodwill, Steinmeier said he would consider replacing the KSK soldiers with NATO AWACS reconnaissance planes for Afghanistan that are based in Germany and have largely German crews.

NATO's decision on whether to deploy the planes has been delayed because of a bizarre attempt to block the move by the French. First, Paris claimed the mission would be too expensive. Then they said it made no sense because the Taliban has no air force that the flying radar facilities could be used against. At the same time, however, Paris offered to deploy its own AWACS aircraft.

'We're not Going to Win this War'

One day after SPIEGEL published Steinmeier's comments, Britain's Times newspaper quoted the departing commander of the British forces in Afghanistan saying that, "We're not going to win this war." Brigadier Mark Carleton-Smith said progress could only be made by talking to the Taliban, which might bring "precisely the sort of progress" needed to end the insurgency.

"It's about reducing it to a manageable level of insurgency that's not a strategic threat and can be managed by the Afghan army," he told the newspaper. Though the Taliban has been "riven with deep fissures and fractures," he added, "the Taliban, tactically, is reasonably resilient, certainly quite dangerous and seems relatively impervious to losses. Its potency is a force for influence."

His statements followed the leaking of a cable by the deputy French ambassador in Kabul, Francois Fitou, in which he claimed the British ambassador, Sir Sherard Cowper-Coles, had told him the strategy for Afghanistan was "doomed to failure." In the cable to French President Nicolas Sarkozy, Fitou said he believed the "security situation is getting worse, so is corruption and the government has lost all trust." The cable also apparently claimed Cowper-Coles said Britain has no alternative but to support the US, "but we should tell them that we want to be part of a winning strategy, not a losing one. The American strategy is doomed to fail."