He came up with a special punch line for the sultry Saturday night. A giant American flag appeared on the screen, with George Patton, played by actor George Scott, in front of it. "Americans love to fight," exclaimed the legendary U.S. general from World War II. "That’s why Americans have never lost and never will lose a war. The very thought of losing is hateful to Americans." It's the speech Patton gave to the United States Third Army before it made its way across the English Channel after D-Day.

Donald Trump has never been a man of subtle messages. When he took to the stage after the video, he immediately made clear what he was getting at. The U.S. just experienced the greatest humiliation in its history, the former president said to cheers from his fans, who had been waiting on a muddy field since the afternoon. "Vietnam looks like a masterclass in strategy compared Joe Biden’s catastrophe."

Trump had actually flown to Alabama to cheer himself up. He doesn’t need to campaign in the area – 88 percent of voters in Cullmann Country cast their ballots for him in the last presidential election. But on Saturday evening, the former president realized he had finally found an issue with which he could attack his successor.

The journalist George Packer recently wrote in The Atlantic that Trump possesses a "reptilian genius," and there is unlikely another term that better encapsulates Trump’s political talent. He’s neither a clear analyst nor a shrewd strategist, but he knows how to strike at the right moment. Biden’s plan had been to withdraw from Afghanistan as quietly as possible and boost his popularity by ending an unpopular war. Now, following a whole slew of amateurish decisions, he has achieved the exact opposite: American television broadcast images on Thursday that could hardly have been any more dramatic. They showed the torn bodies of people who had fled in desperation to the Kabul airport to catch one of the last planes out of the country.

The bombing, which the U.S. military claims was carried out by the terrorist group Islamic State (IS), killed at least 80 people, including 13 American soldiers. Just as serious, though, is the fact that the tense situation is making it increasingly difficult for the Americans to fly out hundreds of U.S. citizens that the State Department says are still stuck in Afghanistan. And Biden’s promise that Afghanistan won’t become a new hotbed of terrorism after the troop withdrawal already sounds like a bad joke. The president promised in a press conference on Thursday night that he would hold those behind the attack accountable. "We will hunt you down and make you pay," he said. But it also means that Biden is being dragged further into a conflict that he actually wanted to get out of.

A president’s political authority always depends on whether Americans have confidence in his leadership abilities. Now, however, the world is looking to a man in the White House who pushed withdrawal at such breakneck speed in part because he wanted his soldiers to be back home before the 20th anniversary of the Sept. 11, 2001, terrorist attacks. It is becoming clear that all reason has been sacrificed to that symbolism. And it is not only the Afghans left behind in the panic of the last few days who are paying the price. The grotesquely amateurish management also weakens a U.S. administration that promised when it took office in January to resume a stronger role on the world stage.

Biden’s rationale for the quick withdrawal was also to free up resources for the truly pressing problems in global politics: a rising China that wants to impose its rules around the globe; or Russia, which is in the process of undermining Western democracies with its armies of online trolls. But who is supposed to believe in the leadership of a U.S. government that allows itself to stumble into this kind of chaos unnecessarily?

Only six weeks ago, Biden had declared that under his leadership, there would be no images like those seen in Saigon in 1975, when American helicopters evacuated diplomats from the roof of the U.S. Embassy. Ultimately, he was proven right. Scenes far worse are burned into the world’s collective memory now: desperate Afghans clinging to an American military transport and then falling from the sky.

In Washington, the "blame game" for the disaster is well underway. Is it Secretary of State Tony Blinken, whose State Department only set up a task force in July – three months after the decision to withdraw – to deal with issuing visas to local Afghan workers who had helped the Americans? Most likely to roll could be the head of Biden’s national security adviser, Jake Sullivan, whose job should have been that of coordinating the withdrawal.

"One thing is certain: You cannot look at the situation and claim that everything went smoothly," says Laurel Miller, who served as the U.S. government’s acting special representative for Afghanistan and Pakistan under President Barack Obama. Members of the Biden administration get even more explicit, as long as you don't quote them by name. "We totally botched this thing," says one. And the dangerous thing is that the chaos could overshadow Biden’s entire presidency.

Biden got off to a respectable start in terms of domestic policy: Just after entering office, he pushed through a $1.9 trillion economic stimulus package. He also managed to get the coronavirus vaccine into American drugstores and doctors’ offices with impressive speed. But now the pandemic is returning because many Americans, particularly in the South, are refusing to get vaccinated. At the same time, the ugly images coming out of Kabul are fueling doubts about whether Biden is really the far-sighted and empathetic politician he made himself out to be during the campaign. In the American press, parallels are already being drawn with the ill-fated Jimmy Carter, whose presidency failed to recover from the debacle of the failed hostage rescue at the U.S. Embassy in Tehran in April 1980, and who was succeeded shortly afterward by the Republican Ronald Reagan.

NATO soldiers assist with the evacuation effort at the Kabul airport: The "blame game" has already begun in Afghanistan.

Biden never believed it was the U.S.’s job to build a functioning state in Afghanistan, says Vali Nasr, who worked for Hillary Clinton’s Afghanistan envoy Richard Holbrooke and now teaches political science at Johns Hopkins University. Holbrooke, who died in 2010, meticulously documented his own work, and that’s how an anecdote survived that illustrates how emotional the subject of Afghanistan was for Biden even more than a decade ago.

As vice president at the time, Biden had been unable to sway Obama who, on the advice of his generals, ordered a massive increase in troops in Afghanistan. When Holbrooke warned Biden in a confidential conversation of the consequences of a hasty withdrawal and reminded him of the responsibility for those Afghans who trusted the word of the United States, the vice president reportedly hissed: "Fuck that, we don’t have to worry about that. We did that in Vietnam, Nixon and Kissinger got away with it." Biden apparently calculated even then that a president would not be judged by the chaos of a withdrawal but by the courage to end an unpopular war.

Biden never believed it was the U.S.’s job to build a functioning state in Afghanistan.

"The Washington political establishment and the media spent years avoiding the truth about this war," says Matt Duss, left-wing Senator Bernie Sanders’ foreign policy adviser. "And now they are trying to put the blame for this disaster on Biden alone." That is just not right, he says.

What is true about this is that more than two-thirds of Americans supported Biden's decision to withdraw from Afghanistan in April. But as images of the Taliban’s march on Kabul flickered across television screens, that figure dropped dramatically – to 49 percent. At the same time, Biden’s approval ratings are slipping below the 50-percent mark for the first time since he took office. The Americans appear to be more averse to the feeling of having bearded fighters with old AK-47s thumbing their noses at them than by the war in Afghanistan itself.

A former Afghan security official told the New York Times that Kabul is threatening to become a Las Vegas for terrorists from around the world. But political scientist Nasr believes that the Taliban have learned from their mistakes and will not allow the al-Qaida terrorist network to spread in the country under their regime again.

However, the Taliban are only in command of a few tens of thousands of fighters, a number that is too small for them to truly be able to control a vast country of over 38 million people. "The Taliban could finance a guerrilla war with drug money," Nasr says, "but they cannot run a country like that." Nasr adds that it would be a nightmare if Afghanistan were to turn into a patchwork of ungovernable provinces.

"I don't think the threat is the Taliban government," he says. "The the biggest threat to the West is no government." 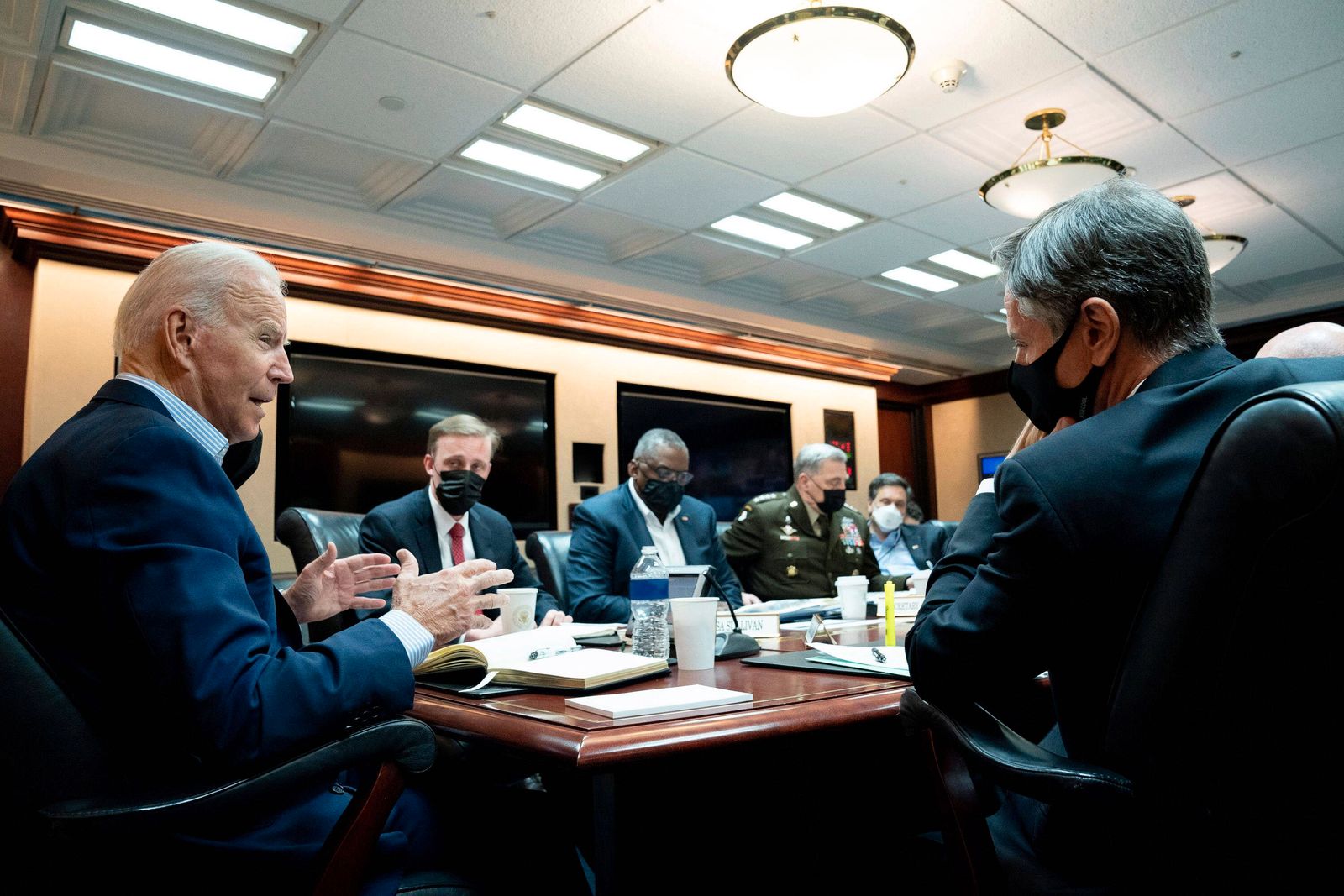 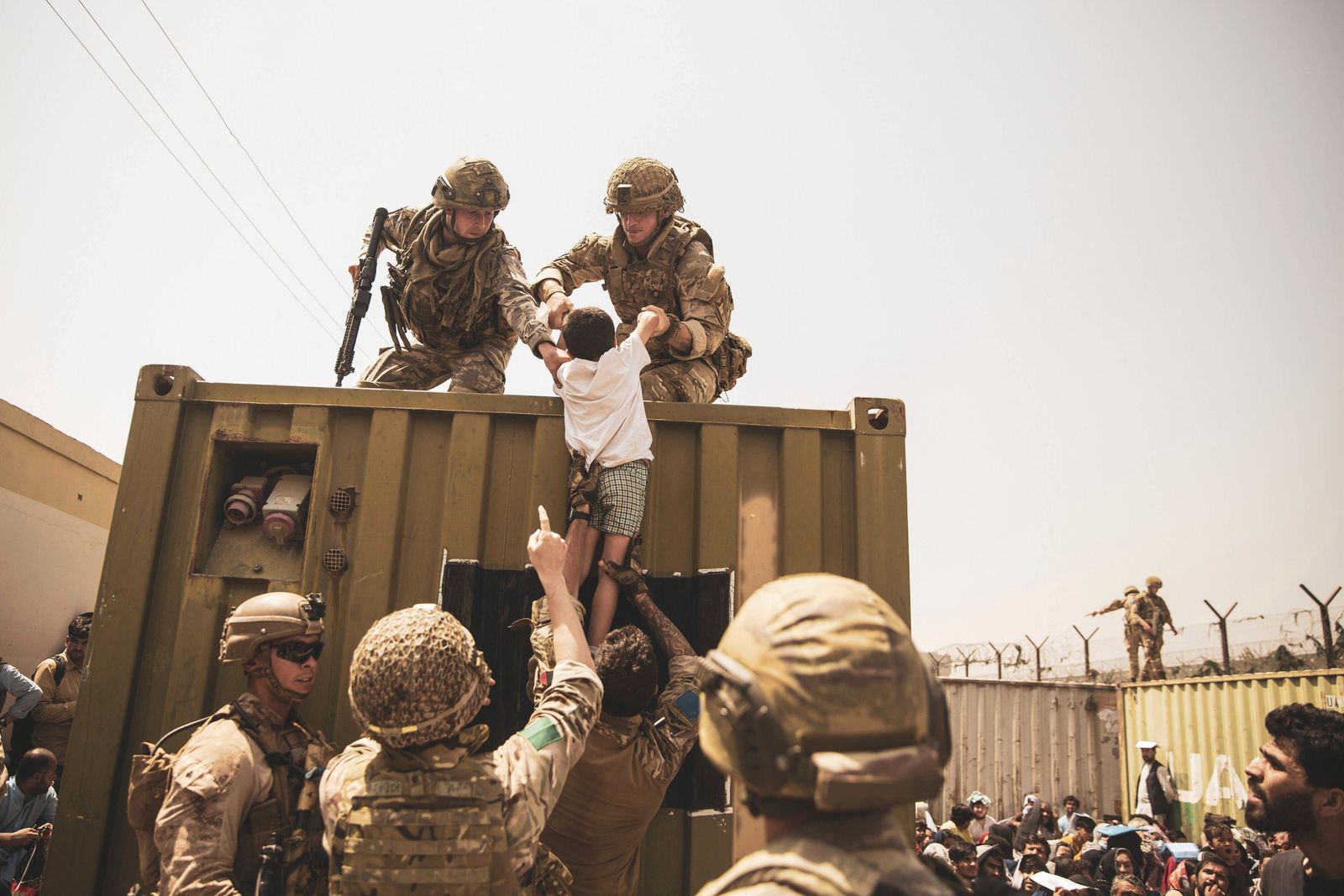 NATO soldiers assist with the evacuation effort at the Kabul airport: The "blame game" has already begun in Afghanistan.