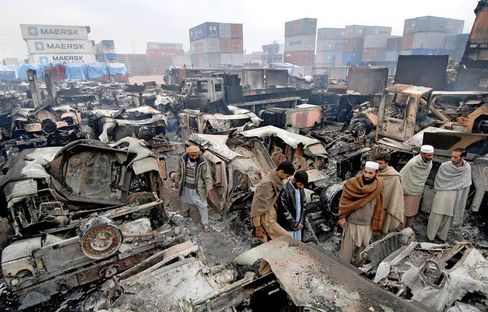 Pakistani employees inspect burned-out trucks at a NATO terminal outside the northwestern city of Peshawar.

Baitullah Mehsud is the leader of the Pakistani Taliban. The 37-year-old has fervently vowed that convoys will no longer be allowed to reach NATO troops and American military units in Afghanistan -- and he has carried through on his threats, too.

Mehsud's terrorist commandos apply pressure on trucking companies that dispatch close to 4,000 truck drivers back and forth between the Pakistani port city of Karachi and neighboring Afghanistan. They kill uncooperative owners of logistics companies, destroy bridges and lay booby traps. On a single December night, Mehsud's men fired grenades and rockets at trucks parked in a rest area near Peshawar, leaving behind about 100 flaming wrecks.

Three-quarters of all the military equipment and goods bound for the allied troops, who have been in Afghanistan since 2002, reach the country from Karachi. For example, the 3 million liters of gasoline and 250,000 liters of water consumed every day by the roughly 65,000 troops stationed in the landlocked country arrive via land routes. These figures will only grow if the United States boosts its contingent from the current level of 33,000 to 53,000 -- and possibly 63,000 -- troops.

This growing demand is forcing the allies to look for alternatives to the two routes across the Khyber Pass and through the Pakistani city of Quetta. As the risks and costs continue to rise, time is of the essence.

Air cargo is of course safer, but also much more expensive. The German military, the Bundeswehr, has shipped an average of 17,000 tons of supplies to Afghanistan each year since its deployment began in early 2002. Ninety percent of the goods have arrived on the so-called northern route, by air to Termes in Uzbekistan or directly to the Afghan city of Mazar-e-Sharif, where the Bundeswehr maintains a large base for the allies stationed in northern Afghanistan.

The rest is shipped from the northern German port of Emden to Pakistan and then transported to the reconstruction teams in Kunduz, Faizabad and Mazar-e-Sharif. Officials from the German Defense Ministry say that there have been "no losses" to date and that "the trouble on the Khyber Pass hardly affects us at all." The freight being brought in by air consists mainly of weapons, ammunition and military and civilian mail. Under the Strategic AirLift Interim Solution (SALIS) agreement, a Russian-Ukrainian firm keeps two Antonov-124 cargo aircraft available for use by Germany and other NATO and European Union partners at the Leipzig/Halle Airport in eastern Germany. Smaller Ilyushin aircraft can be used when needed, as well as charter aircraft and Airbuses operated by the Luftwaffe, Germany's air force.

The flights normally head for Termes. From there, the cargo is loaded onto smaller Transall aircraft or trucks and brought over 100 kilometers (63 miles) to Mazar-e-Sharif, where about 2,000 of the roughly 3,500 German soldiers currently present in Afghanistan are stationed.

Supreme, a company headquartered in Switzerland that has offices in Frankfurt and Dubai, ships in fuel and food for the Bundeswehr via Uzbekistan. The company even supplies toilet paper and linens, and it operates mess halls and refrigerated buildings in the camps.

A single charter flight costs about €150,000 ($190,000). This steep rate led military officials a long time ago to start looking into the considerably less expensive rail route through Central Asia. In October 2003, then-German Chancellor Gerhard Schröder reached an agreement with then-Russian President Vladimir Putin that allowed the Germans to use Russian airspace and railways. 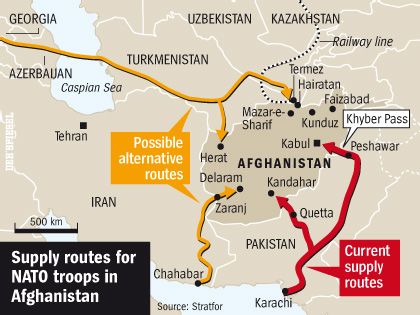 Current and possible routes for supplies to allied soldiers in Afghanistan.

In fact, Germany is the only NATO country that enjoys permission to transport war materiel through Russia by rail. But, to date, not a single train has arrived in Afghanistan because transit countries, including Kazakhstan and Uzbekistan, have refused to grant permits for passage. However, officials at the German Defense Ministry say that these problems have recently been resolved. This month might see the first shipment to Uzbekistan brought by train to the Afghan terminal in Hairatan, near Termes.

"What we don't know is what exactly will arrive," says a senior German officer. Trains often stand on sidings for days. The Bundeswehr is not allowed to -- nor does it want to -- send along armed security details.

The Bundeswehr has also looked into the feasibility of building additional stretches of track in Afghanistan. There are already 20-year-old plans from the days of the Soviet occupation. The railroad could connect the border town of Hairatan with Mazar-e-Sharif, 67 kilometers away. Thanks to a bridge built in 1982 across the Amu Darya River, which serves as the border between Afghanistan and Uzbekistan, Hairatan has a direct connection to the rail network in Termes.

The financing is still up in the air, though. But given that the project would both make it easier to bring supplies to NATO troops and promote the region's economy, military officials hope to receive funds from the German Federal Ministry for Economic Cooperation and Development and international organizations. For example, the Asian Development Bank plans to prepare a feasibility study with the support of the Uzbek government.

In December, a privately owned Uzbek railroad company, which already operates in Afghanistan's Herat Province, contacted the German Embassy in Kabul. According to a confidential report the embassy sent to the German Foreign Ministry in Berlin, the Uzbek company "would like to work with German companies" to implement projects sponsored by the development bank.

There are two problems associated with the routes through Pakistan, which continue to be indispensable: Taliban attacks and tough border controls. If the United States increases troop levels, the customs formalities could become a nightmare, which would also further complicate the transportation of food and medication intended for Afghanistan's civilian population.

The drivers already spend a third of their time waiting at the border. The competition is intense, and semi-official characters demand a wide range of "processing fees." The Taliban, tribal militias and warlords also demand tolls -- up to 25 percent of the value of a truck's cargo.

These circumstances have prompted the Americans to pressure the Afghans and Pakistanis to improve the customs system. The convoys are also being armed so as to protect themselves and provided with GPS systems that will allow dispatchers to monitor their trips in real time.

The best road networks among all neighboring countries are to be found in Iran, a country neighboring Afghanistan that has recently had significant issues with the West, though for other reasons. These problems with Iran have made this alternative taboo. But NATO is desperate to find a solution and, according to diplomatic sources in Pakistan, it is also negotiating with Tehran "at a lower level." The rapprochement already began under former President George W. Bush, who had accused the mullah-controlled regime of being in league with the Taliban. But now that Obama is in office, ironically enough, there is a better chance that Iran could end up helping the United States -- also known as the "Great Satan" -- and its allies.

During his first state visit to Kabul in August 2007, Iranian President Mahmoud Ahmadinejad promised Afghan President Hamid Karzai his full support in the struggle for stability. "The best friend of Iran," Ahmadinejad insisted, "is a country that is economically powerful and developed." So far, Iran has paid Afghanistan more than $1 billion (€770 million) in development aid.

A usable long-distance road already exists in Afghanistan. India, one of the biggest investors in Karzai's country, has built a road between the city of Zaranj on the Iranian border and Delaram, which lies about 200 kilometers (125 miles) to the northeast in Afghanistan. The road could link the Iranian port of Chabahar with Afghanistan's turbulent south.

Work has already begun on this resupply route. Apparently even a religious fanatic like Ahmadinejad can hate the Taliban.