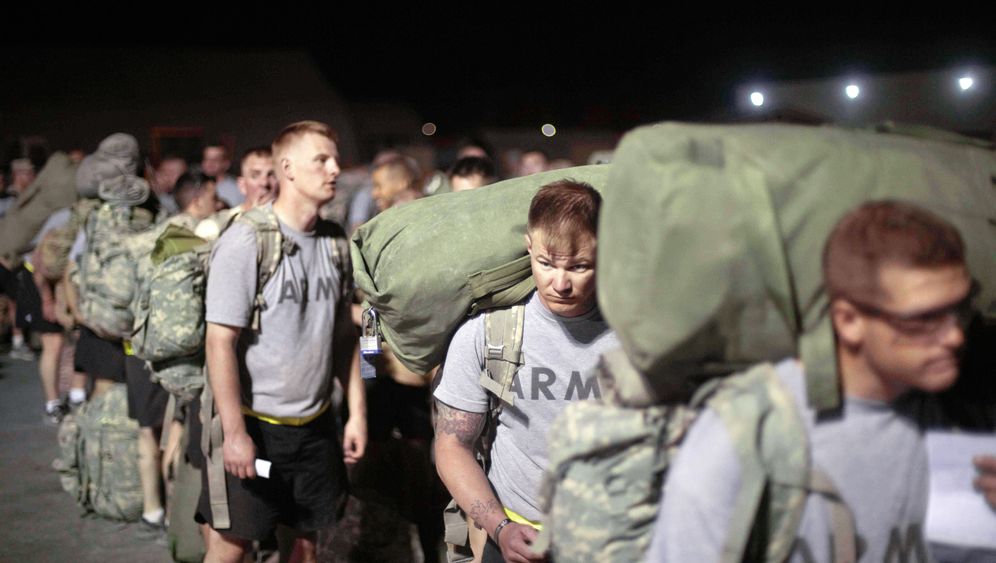 The best way to get to Ulyanovsk is via riverboat. The Russian provincial city, formerly known as Simbirsk and established by the czar more than 360 years ago as a border fort, lies on a steep bank of the mighty Volga, at a spot where the river is at least 3 kilometers (about 2 miles) wide.

A writer once dubbed Ulyanovsk the Bethlehem of the 20th century, because it was the home of Vladimir Ilyich Ulyanov, who was born in the city in 1870 and went down in history under the name Lenin. He had hardly died before the communist faithful from around the world embarked on pilgrimages to the city on the Volga, which owes its current name to its famous son. Above the river is the enormous Lenin Square, with its oversized Lenin Monument. The small wooden house where the revolutionary leader grew up is still standing on Lenin Street.

Now the city, once a magnet for communist idealists, is about to become a gathering place for Western troops. When the withdrawal of the International Security Assistance Force (ISAF) troops from Afghanistan begins, a portion of the NATO contingent will pass through Ulyanovsk -- or, more precisely, Ulyanovsk Vostochny Airport. The airport will act as a hub for one of the most costly and complex troop withdrawals in modern military history. Some 130,000 soldiers must leave Afghanistan within two years, together with at least 70,000 vehicles and 120,000 containers.

Ulyanovsk Vostochny used to be the airfield for the local aircraft plant, which produced the An-124, once the world's largest transport aircraft. It has a runway that is more than 5 kilometers long and was conceived as an alternate landing site for the Soviet Union's Buran space shuttle.

The first NATO officers arrived in Ulyanovsk in the fall, and city officials have been in high spirits ever since. Governor Sergey Morozov, 52, a former police officer, is already dreaming of "a few thousand jobs." Once the withdrawal is underway, says Morozov, "several dozen planes" will land in Ulyanovsk every day, and 60 trains a month will depart from the city toward the Baltic countries, headed for Baltic Sea ports like Klaipeda in Lithuania, where the freight will be shipped to Western Europe.

NATO's Ulyanovsk operation could bring in annual revenues of $1 billion (€745 million) to local air cargo companies and $250 million to the railroad. It would give the city a massive economic boost.

But what is even more massive is the challenge NATO faces. After being in Afghanistan for over a decade, it can hardly wait to leave the region. Despite all claims to the contrary, its mission has been a failure, and its only concern now is to get its personnel and equipment out of the country without suffering further losses.

It would be an understatement to call the undertaking precarious. Military withdrawals from Afghanistan have ended in disaster several times in the past. When the British left Kabul in 1842 after their first campaign, because they could no longer control the insurgents there, only a few fortunate members of an expedition force of 17,000 escaped with their lives. The rest were massacred en route.

The Soviets lost 15,000 men during their Afghanistan adventure, and their 1989 withdrawal also ended in chaos, as their convoys struggled through the snow-covered mountains at Salang Pass while under fire from the mujahideen. Another 60 men died in the final one-and-a-half months, after being shot or suffocating in avalanches.

Both the British and the Soviets left a country that they had been unable to pacify. The same holds true for NATO today. Afghan insurgents will presumably do everything possible to inflict pinprick attacks on NATO troops as they withdraw. And there will be plenty of opportunities, because NATO brought a great deal more weapons and military equipment to Afghanistan to hunt al-Qaida and the Taliban than the British or the Soviets did in their time. Germany's military, the Bundeswehr, will be bringing back more than 1,700 vehicles, howitzers and tanks.

This withdrawal will be militarily precarious, politically explosive and logistically complex. It will take place primarily through Afghanistan's neighbors to the north, because the southern route through Pakistan is not seen as reliable. Besides, after Pakistan soldiers were killed in NATO air strikes, Islamabad closed that route and only now plans to reopen the road.

As a result, says General William Fraser, the commander of the US Transportation Command, the routes through the countries of former Soviet Central Asia will have top priority for the withdrawal. But this too is a difficult region, where countries like Uzbekistan, Tajikistan and Kazakhstan are run by autocrats with poor records on human rights, which is why the Americans wanted little to do with them in the past.

Western emissaries have been on the road in Central Asia for months, bargaining, making deals and promising everything under the sun to convince the region's potentates to cooperate. There are problems everywhere, such as in the Kyrgyz capital Bishkek, where the United States has maintained its most important air base north of Afghanistan until now. Now the Kyrgyz leadership is threatening not to renew its lease with Washington, meaning that the current lease would end in July 2014, just as the withdrawal from Afghanistan is in full swing. During a visit in March, US Defense Secretary Leon Panetta made it clear to the Kyrgyz government that the airport there is "extremely important" for the American withdrawal.

Washington is courting neighboring Uzbekistan even more assiduously. The only functioning railroad line from Afghanistan ends at the border bridge across the Amu Darya River in southern Uzbekistan. The line begins 70 kilometers away in Mazar-e-Sharif and leads to the river port at Hairatan. This railroad route can be used to bring weapons and equipment to Uzbekistan and on to Russia, although the cargo will have to be unloaded and reloaded several times en route.

But the president of Tashkent, Islam Karimov, has ruled the country with an iron fist for more than 20 years. The United States had an air base in Uzbekistan until 2005. When Karimov's security forces brutally suppressed an uprising in the city of Andijan, Washington froze its relations with Tashkent and Karimov ordered the air base closed.

Apparently all of this is now forgotten, as the Americans suddenly discover their affection for Uzbekistan. Envoys have been visiting Karimov on an almost weekly basis. US President Barack Obama has had several conversations with the Central Asian leader, and both Secretary of State Hillary Clinton and Afghanistan envoy Marc Grossman have been to Tashkent. Clinton promised Karimov that Washington would eliminate trade barriers and, after the meeting, announced that Uzbekistan had made progress on human rights issues.

'Worst of the Worst'

This sort of statement is difficult to reconcile with the truth. The situation remains dramatic, says the American human rights organization Freedom House. It rates Uzbekistan among the "worst of the worst countries" when it comes to the political freedoms of its 28 million citizens, and it argues that the regime there is hardly any better than the Taliban in Afghanistan prior to the 2001 US intervention.

Nevertheless, the US Senate hurried to approve new funds for arms purchases by the Uzbeks. The Americans could end up handing over some of their military equipment to Karimov during their withdrawal from Afghanistan, including armored vehicles, small arms, mine detectors, navigation equipment and perhaps even drones.

This makes Russia uneasy. Moscow views Uzbekistan as a particularly loose cannon -- and so does Beijing, as a senior military official in Moscow learned during conversations with his Chinese counterparts. Both countries fear that the situation in Central Asia will deteriorate after the withdrawal of Western troops, and that religious fanatics from Afghanistan and Pakistan will increasingly penetrate into countries like Uzbekistan, Kyrgyzstan and Kazakhstan.

Although the Americans will circumvent dictator Karimov's realm with their airlift from Afghanistan to Ulyanov, they will still have to ship some of their equipment through Uzbekistan. Flights are expensive and can only carry a limited amount of cargo. For example, Germany's Bundeswehr pays €420,000 for each flight on Antonov transport aircraft from the eastern German city of Leipzig, where they are stationed, to Mazar-e-Sharif in Afghanistan.

And in regard to Ulyanovsk, the Americans still have many details to iron out with Moscow. The Kremlin is determined to avoid giving the public the impression that it is opening the door to the Americans and NATO by letting them use the base.

When the plans for the Ulyanovsk hub became known, graffiti began appearing in the streets of the city, warning: "No NATO base in Ulyanovsk!" The Communist Party leadership is characterizing the plans as an "occupation," and criticism has also been voiced on the Internet. The Russian defense minister has been maligned as a "Number One Traitor," because he allegedly agreed to allow NATO to operate deep within the country.

After having fueled the hysteria against NATO for years, the Kremlin is now trying to dampen the uproar. The NATO base in Ulyanovsk is "in the interest of Russia's military security," Defense Minister Anatoly Serdyukov insisted. And Deputy Premier Dmitry Rogozin, who is in charge of the defense industry, completely downplayed the problem, saying: "I don't think that the transit of NATO toilet paper through Russia can be considered the betrayal of the fatherland."

The Russians are now trying to give the NATO airlift a commercial veneer. The Transportation Ministry -- not the Defense Ministry -- will be formally in charge of the Ulyanovsk operation. But this transit route isn't optimal for the Americans, either. "In an ideal world, I would like to be less dependent on Russia," said Andrew Kuchins of the Washington-based Center for Strategic and International Studies in a recent interview with the New York Times. "But what are our options with getting things into or out of Afghanistan?"

So far, only the Bundeswehr seems unmoved by the controversy. It signed its own transit agreement with the Russians early on, and it's working "extremely well," says Brigadier General Reiner Schwalb, the German defense attaché in Moscow. The Germans completed about 270 flights through Russia last year. Troops are flown on Airbus aircraft to Termez in Uzbekistan, while two German transport squadrons bring military equipment to Mazar-e-Sharif on Transall aircraft, with a stop in the Russian city of Krasnodar.

The Germans are even permitted to transport weapons to Russia, which is something the Americans have not been allowed to do yet, not even through Ulyanovsk. But even the Russians don't want to see weapons left behind in Afghanistan or other parts of Central Asia. 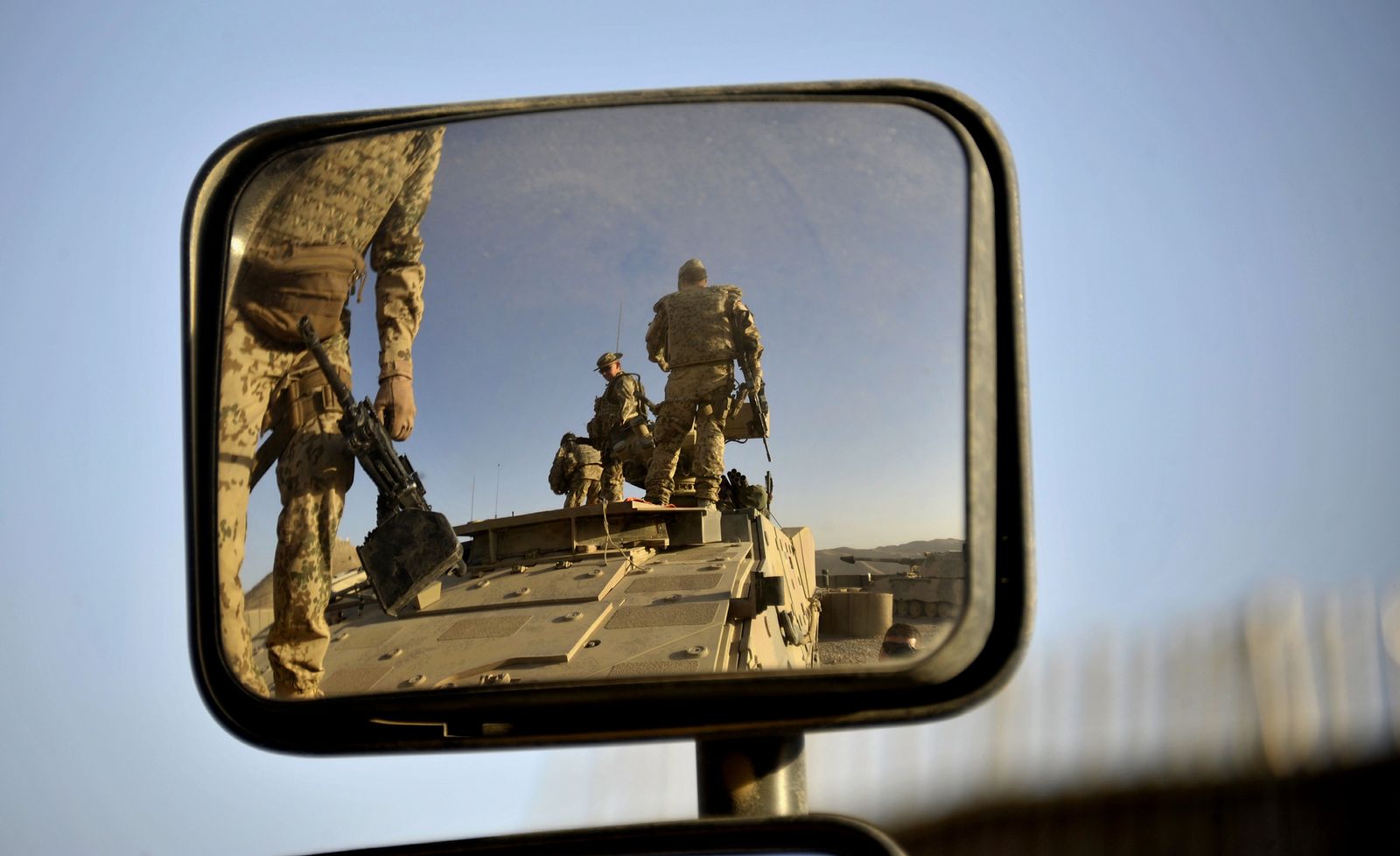 Bundeswehr soldiers near Baglan. Germany's military will be bringing back more than 1,700 vehicles, howitzers and tanks.