Bundles of paper covered with ancient Arabic letters lie on tables and dusty leather stools. In the sweltering heat, a man wearing blue Muslim robes flips through a worn folio, while others are busy repairing yellowed pages.

An astonishing project is underway in Timbuktu, Mali, one of the world's poorest countries. On the southern edge of the Sahara Desert, experts are opening an enchanted Aladdin's Cave, filled with hundreds of thousands of ancient documents.

The Ahmed Baba Library alone contains more than 20,000 manuscripts, including works on herbal medicine and mathematics, yellowed volumes of poetry, music and Islamic law. Some are adorned with gilded letters, while others are written in the language of the Tuareg tribes. The contents remain a mystery.

Manuscript hunters are now scouring the environs of Timbuktu, descending into dark, clay basements and climbing up into attics. Twenty-four family-owned collections have already been discovered in the area. Most of the works stem from the late Middle Ages, when Timbuktu was an important crossroads for caravans. It was home to gold merchants and scholars, and it even boasted a university with 20,000 students. The old saying "the treasures of wisdom are only to be found in Timbuktu" summed up the ancient city's appeal.

But the legacy of the oasis, written with ink made from gallnuts, is beginning to fade. Roughly a dozen academic institutions are now involved in saving and evaluating the documents. The French are developing a database, while the United States has donated a device to digitize the damaged documents. The Norwegian cities of Oslo and Bergen are training locals to become conservators. Shamil Jeppie, a Cape Town historian charged with managing the multinational effort, recently published a book, "The Meanings of Timbuktu," in which he describes the current status of the project. European colonialists suppressed the "intellectual history of West Africa," Jeppie writes, and now it is time to rediscover the site that some have referred to as an "African Oxford."

This is an astonishing assessment, given Timbuktu's status as a desert town in the middle of nowhere. In 1825, a European managed to navigate the difficult route down to a bend in the Niger River, south of the Sahara. By the time he reached the oasis, he had run out of water and was barely alive. Shortly after entering the city he was murdered. Timbuktu was taboo -- off-limits to Christians.

Even today, Timbuktu is not an easy place to get to. From August to February, local riverboats called pinnaces bob their way up the Niger River, landing at the port town of Kabara, 10 kilometers (6 miles) from Timbuktu. The landscape is dominated by sand dunes until shortly before the city's suburbs. The desert wind known as the Harmattan is about as pleasant as a dragon's breath.

And yet the old section of the city is blanketed in an odd, heavy magic, filled with mosques topped by bulbous minarets and wealthy citizens' opulent houses, cube-shaped buildings with meter-thick walls made of baked clay.

According to an employee at the Ahmed Baba Library, Mali was overrun by the French colonial army after 1880. "The French didn't want us to have the manuscripts, and they tried to steal them," says the library worker. The documents were hidden to protect them.

But now the hunt is on. The house of Ismael Haidara, a historian whose ancestors include the Visigoths and jungle kings from southern Mali, has proven to be a treasure trove. Haidara, a private citizen, horded more than 2,000 bundles of papers, passed down through 11 generations of his family. "This is our family history," he says, pointing to a leather slipcase from the year 1519.

Albrecht Hofheinz, an Arabist from Oslo, estimates that there are up to 300,000 forgotten manuscripts in Mali. Insect bites have discolored the pages, he says. "The paper disintegrates, is destroyed by mold or eaten by termites." Time is of the essence. Some of the volumes are being photographed using a digital photo studio provided by the University of Chicago. The first of the documents are expected to be available on the Internet by the end of the year.

The contents of astronomical documents are already being analyzed. "So far 112 texts on astronomy have been discovered," explains Petra Schmidl, a historian of science at the University of Frankfurt am Main. They include calendar calculations, astrology and a depiction of the Ptolemaic world system.

Researchers are now looking forward to studying the tattered archives that contain reports on ancient oases and nomadic societies. The manuscripts also include lists of goods transported by caravans. Will the documents finally shed some light on the mysterious caravan trade?

There are many questions on how the trade thrived in the desert. The world's largest desert stretches 2,000 kilometers (1,242 miles) from north to south. How did the caravans make it through? Archaeologists have not even scratched the surface at the caravans' destinations in Ghana and the Ivory Coast.

But they have uncovered new finds in the Sahara, including traces of an ancient infrastructure. Water storage facilities have been found in the middle of the vast desert, as well as places fed by underground wells. Desert palaces once built by the Tuareg were unearthed in the Essouk oasis in northern Mali.

It is now clear that the Arabs were the first to conquer the inhospitable arid zone. While Rome's legions ventured no further than the edges of the desert, they penetrated far deeper into the Sahara.

There is evidence of a Moorish influence in Ghana by as early as 800 A.D. Vast gold deposits were found in the Ghanaian rain forest. Their owners, the Soninke kings, ruled a realm that stretched to the banks of the Senegal River.

Point of Departure for Desert Journeys

According to Arab accounts, the black rulers lived in tents guarded by large dogs wearing gold and silver collars and manacles. According to Arab geographer al-Bakir, one of these kings commanded an army of 200,000 soldiers.

The country provided cola nuts, ivory, cotton and semiprecious stones. Local traders loaded their goods onto cargo boats and transported them on the Niger to Timbuktu. The city was the point of departure for journeys into the desert.

Camels stood at Timbuktu's water troughs. Its residents included Arabs, light-skinned Berbers and dark-skinned members of the Malinke tribe. The oasis smelled of lamb dung and fresh spices, and muezzins called out from its minarets. Gold, a form of payment, glistened everywhere -- as dust, nuggets and fist-sized lumps.

In 1324, when Kankan Mussa, one of the kings of Mali, went on a pilgrimage to Mecca, via Cairo, with his ostentatious entourage, he was so generous with the precious metal (he had brought along two tons of it) that gold prices on the Nile plunged. News of the wealthy black monarch even reached faraway Europe. A Catalan map of the world depicts him with thick lips and holding a scepter.

Kankan was so impressed by the palaces of the Orient that he brought home an architect, who created malleable mud-brick imitations of the Arab mosques in Timbuktu. The Djingerber Mosque, with its sugarloaf-shaped towers, still stands in the city today. 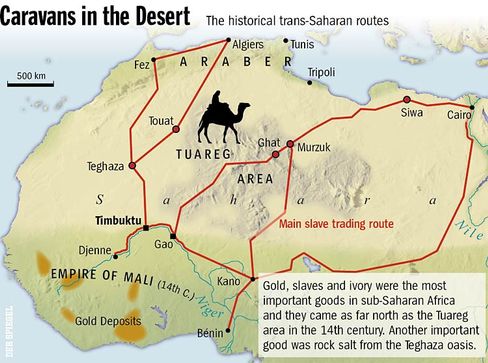 For many years, such customs were all but unknown in Europe (US ethnologist Susan Vogel filmed the annual mud plaster ceremony last year for the first time). In the past, those traveling to Timbuktu had to traverse seemingly endless volcanic plains and rocky plateaus -- at temperatures of up to 55 degrees Celsius (131 degrees Fahrenheit). The area south of Murzuk, an oasis notorious for its role in the slave trade, consists of a vast, shimmering sand bowl measuring 90,000 square kilometers (34,700 square miles, or about the size of Portugal).

Anyone who lost his way there was literally baked.

The Arabs only managed to complete the journey through the desert with the help of camels. A camel can drink 200 liters of water at a time, and its kidneys retrieve large amounts of water after urination. The Arabs also enlisted the help of the Tuareg tribes, which lived on ridges in the central Sahara.

Even there, surrounded by hyper-arid sand pans, volcanic basalt chimneys and pinnacles, life was possible. The Tuareg drilled deep wells, and they had their black slaves excavate long underground canals with slight inclines to bring in ground water.

Archaeologists have shown that an incredible system of underground canals up to 20,000 kilometers (12,422 miles) long once existed at Wadi al-Hayat in Libya. Thanks to such hydraulic marvels, the desert blossomed and crops sprouted in the fields of the Tuareg. In Essouk, they ate gazelles and dried perch, imported from the Niger River, 240 kilometers away. Murzuk, with its large slave market, was surrounded by a massive wall with seven gates -- in the middle of the Sahara.

A Source of African Pride

But nothing worked without the blue-robed Tuareg. They provided provisions for the caravans and led them to the oases. At times, they turned to blackmail and looting, and Timbuktu was attacked several times.

Researchers are anxious to discover more about the haggling between ethnic groups and how they divided up the spoils. In the late Middle Ages, Cairo was sending 12,000 camels a year to Mali. There were plenty of fortunes to be made.

The slave trade was especially lucrative. Guards carrying whips drove the slaves through the hot desert. "Only the youngest and strongest survived the two-month desert trek, and they were walking skeletons by the time they reached the Fezzan region, where they were fattened up," writes Austrian geographer Hans Weis.

The Koran also made its way into sub-Saharan Africa along these torturous routes. In its heyday, Timbuktu had 180 Koran schools. "A large library was built, where the fundamental theological and philosophical works were copied," explains Thomas Krings, an Africa expert at the University of Freiburg in southwestern Germany. The many documents that were penned then are now emerging in Mali as crumbling volumes. "Many people consider Timbuktu to be the end of the world," says Mahamoudou Baba Hasseye, the owner of a valuable private collection, "but it was an important center of Islamic scholarship."

Calligraphers once plied their trade in the desert. Some of the manuscripts uncovered in Timbuktu contain gold lettering, and some are written in the unusual Songhai and Fulfulbe tribal languages.

These treasures are still a long way from being saved. The libraries are filled with bits and pieces of paper, evidence of crumbling manuscripts. The government of South Africa promised to build a library in Timbuktu years ago, but nothing ever came of it.

But at least there are many who have come to Timbuktu to help save its ancient manuscripts. The project, which historian Petra Schmidl characterizes as being on the "extreme fringe of the Islamic academic community," is a source of great pride for Africans.

"Africa has repeatedly been portrayed as culturally inferior," says Essop Pahad, South Africa's Minister in the Presidency. "In Timbuktu, we are proving that the opposite is true."