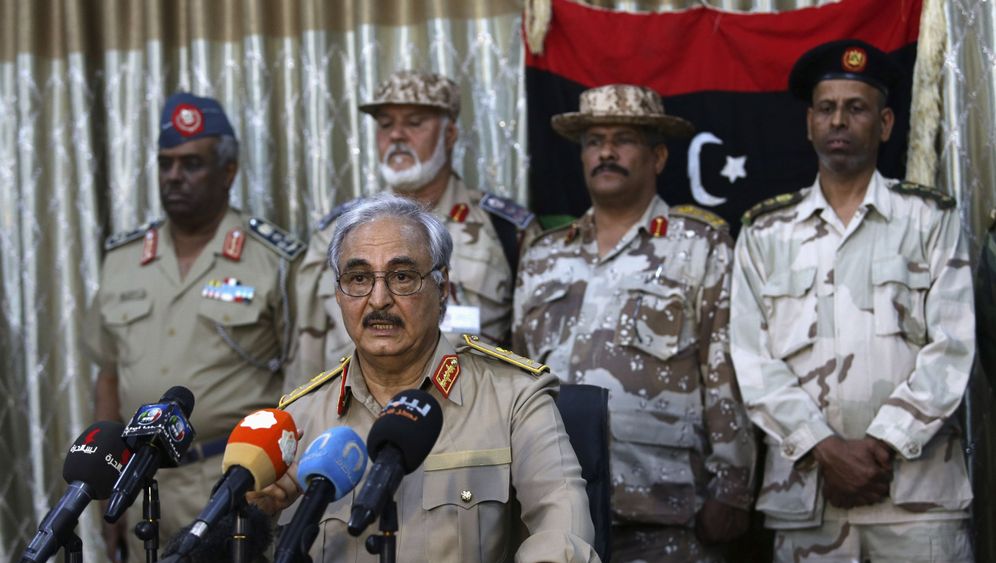 In the tense build-up to the 2011 uprisings, Arabs seemed to be turning away from dictatorship. Poll after poll showed that more Egyptians, Jordanians and Moroccans believed democracy was the best form of government than did Americans or, say, Poles. But "democracy" in the abstract could mean just about anything as long as it was positive. It was one thing to believe in democracy and quite another to practice it.

In Egypt, the loss of faith in not just democracy, but in the very notion of politics, was particularly striking. A not insignificant number of Egyptians backed the military coup of July 3, 2013, and then turned away from -- or, worse, embraced -- the mass killing of their countrymen on August 14, 2013. More than 600 were killed in mere hours, as security forces moved to disperse Muslim Brotherhood supporters from two protest camps in Cairo. This happened exactly a year ago -- and will remain a dark blot on the country's history. It, in a sense, is what the Arab Spring had managed to unleash -- not just chaos but something darker.

Before they began to falter, the region's autocrats, whether in Tunisia, Syria or Yemen, were fond of reminding Westerners that despite their brutality -- or perhaps because of it -- they were the ones keeping the peace and ensuring stability. As Egyptian President Hosni Mubarak said in a televised address just 10 days before he was ousted, "The events of the last few days require us all as a people and as a leadership to choose between chaos and stability." In a sense, he and his fellow autocrats were right -- there was a tradeoff. These, after all, were weak states, divided by religion, ideology, sect and clan.

With little warning, the uprisings pushed these internal tensions and conflicts that had always simmering in the background to the fore. Before the uprisings, Arab strongmen had governed unwieldy countries with arbitrary borders and uncertain identities. They promised stability at the expense of liberty -- and it was a bargain that held for decades.

In Eastern Europe, democratic transitions became possible when the dominant ideology was discredited by the demise of the Soviet Union. Meanwhile, in Latin America, the primary cleavages were largely economic in nature. During transitions in Brazil, Chile and Argentina, the leftist opposition could reassure regime elites that their financial interests would be protected. In the Middle East, there was, and could be, no such resolution.

While economic grievances were at the fore for ordinary Tunisian and Egyptian protesters, they were quickly overshadowed by questions of identity. The major parties and movements, whether Islamist or liberal, had little to say about the economy beyond the self-evident. Who, after all, could take issue with fighting unemployment and combating poverty? Ideological divides over Islam dominated an increasingly raucous debate among the secular intelligentsia, on one hand, and an aspiring Islamist counter-elite, on the other.

The foundations of society and state were still very much in doubt, and the Arab uprisings only made these questions more difficult to answer. There was a basic lack of consensus over the meaning and purpose of the modern nation-state and, relatedly, the role of religion in political life.

The sheer ferocity of this confrontation led a growing number of so-called "liberals" and "democrats" to embrace the military -- and particularly a charismatic general named Abdel-Fattah el-Sissi -- as protector and savior of the Egyptian state. And Sissi filled the role quite well. He was weaned in and by the military, rising through the ranks under the Mubarak regime to become head of military intelligence. In his public appearances, he presented himself as the stern patriarch caring for his wayward children. Many Egyptians -- too many -- returned the favor. They longed for the return of a strongman.

'This Is Something We Live'

When I, as an American researcher, would talk to my friends in the region about the importance of respecting democratic outcomes even if you disagreed with them, there was a basic gap. As a journalist friend told me once: "This is something you study; this is something we live." They were the ones who had to live with the consequences of elections. In Egypt, the sentiment was particularly jarring considering how recent the experience under military rule had been -- a troubled year and a half where the army woefully mismanaged the country.

But during the Muslim Brotherhood's one year in power, those memories began to fade. Liberals, leftists and even revolutionaries looked to the army to reset the political process and start over. They opposed what they saw as a creeping Islamist takeover of the Egyptian state -- from its courts and newsrooms to its labyrinthine bureaucracy -- all, apparently, in the service of forcibly reshaping Egyptian society. With so much at stake, the dangers of military coups seemed beside the point.

The risks were simply too high, and for those actually living under "democracy," it didn't seem nearly as exciting as Western observers made it sound. It was, instead, deeply frightening.

The return of the generals -- culminating in Abdel-Fattah el-Sissi's rise to the presidency -- was most striking in Egypt, but elsewhere too, the disillusion with democracy, and its attendant messiness, spread. In Libya, Syria, Egypt and Tunisia, the fall of a dictator meant a weakened state and a gaping power vacuum, which radical Islamist groups, such as Libya's Ansar al-Sharia, were all too willing to take advantage of. Meanwhile, Libya's democratically elected General National Congress struggled to make its authority felt amidst heavily-armed militias, which would, on occasion, surround the parliamentary building to swing votes in their favor.

Libya was supposed to be different -- ideological divides were less pronounced. It seemed unlikely that the Muslim Brotherhood would be able to repeat the feat of other Islamist parties across the region, which had quickly risen to power. There hadn't traditionally been a secular elite as in Egypt or Tunisia, and even "secular" parties like Mahmoud Jibril's National Forces Alliance were more than comfortable speaking the language of religion and sharia. Groups like the Muslim Brotherhood simply had less traction because they weren't as distinctive -- regional and tribal divides took precedence. But that was then. As the Libyan Muslim Brotherhood, which could claim an organizational coherence that others couldn't, grew more powerful, the fears of Islamist takeover of the state grew along with it.

The "Egyptianization" of the Libyan conflict brought yet another general, Khalifa Heftar, to newfound prominence. Heftar claimed to speak for something called the "Supreme Council of the Armed Forces," sharing a name with the military body that had ousted President Mohammed Morsi just a year before. Taking another cue from Egypt, Heftar appeared on television in February to announce a "roadmap" for saving Libya from Islamist militias and politicians. In May, after gathering more support, forces loyal to Heftar attacked the General National Congress building.

Like Sissi, Heftar is the new face, and voice, of the post-Arab Spring era, fashioning himself as a strongman savior bearing good tidings of stability and security after a destabilizing democratic process. In this respect, Egypt has been an inspiration to its neighbors, but not necessarily in the way one might have hoped.

The "Islamist-secular" divides were real before, but they at least seemed to be localized. The role -- and relative strength -- of Islamist parties varied widely across North Africa. But the defining breach of the coup in Egypt -- backed by Saudi Arabia and the United Arab Emirates -- has given these conflicts an increasingly regional cast, reflecting a lopsided proxy battle with an increasingly isolated Qatar and Turkey on the other side. Before the July 3, 2013 coup, the leaders of Tunisia's Ennahda party were keen to distinguish and distance themselves from their counterparts in Egypt, whom they saw as damaging the Islamist brand. Yet, after the military's ouster of Morsi, the outrage of Tunisia's Islamists became palpable -- they sympathized, of course, with the Brotherhood's plight, particularly after the mass killings of Morsi supporters in August 2013.But they also feared an Egypt scenario at home, with the secular opposition threatening more mass protests if Ennahda didn't step down.

Today, the Brotherhood's affiliates and descendants have coalesced in a way that they haven't for decades. Numerous meetings and conferences have been held in Doha, Istanbul and other capitals to discuss strategy, tactics, lessons learned and, more generally, what's next for an Islamic "project" seemingly in decline. Movements that have long been committed to peaceful political participation now must contend, as in Egypt, with a minority of members -- and a larger minority of supporters who are turning to the use of anarchic, low-level violence against repressive regimes, in the form of lobbing Molotov cocktails, burning police cars and attacking security personnel. In the Syrian and Libyan theaters, violence is itself a form of politics, and Brotherhood affiliates there have either allied themselves with armed groups or formed their own militias.

There is now a sense of shared Islamist solidarity and struggle in the face of a hostile regional and international environment. Each local Brotherhood branch has faced existential moments before, but this is the first time that the challenge has extended to so many of them at the same time. This is what the Arab Spring made possible, for both better and worse. Having succumbed to the temptations of prominence and power, Islamists across the region are thinking again, and anew, about the long game. They've been here before. Just two months before the Arab uprisings began, I spoke to Hamdi Hassan, head of the Egyptian Brotherhood's parliamentary bloc, during an election in which the Mubarak regime wouldn't permit the movement to win even one seat.

They seemed resigned to their fate, but, at the same time, they believed that history, and God, moved with them. "In the lifespan of mankind," Hassan told me, "80 years isn't long; it's like eight seconds."

Shadi Hamid, 30, fellow at the Brookings Institution's Center for Middle East Policy. You can purchase his book below:"Temptations of Power:Islamists and Illiberal Democracy in a New Middle East."