"We congratulate you Muscovites on the great victory!" speakers called out repeatedly to some 100,000 people gathered at the Kremlin Wall to cheer Vladimir Putin's victory on Sunday night.

But there were no Muscovites amid the masses, or only a few, at best. Throughout the day, bus convoys bearing license plates from every possible Russian province had rolled into the city, the sleepy faces of its young passengers visible through the windows. Later, carrying maps and beer cans, they would congregate at the Kremlin. They even came from as far as Saratov, a city on the Volga River, nearly a thousand kilometers south of Moscow.

It was a spooky evening: The capital was hardly represented on its own streets. Instead, tens of thousands of people shouted "Putin, Putin," until the new president broke into tears. The young people from Saratov, who were practically children, hadn't the faintest idea what role they were playing -- creating an impression of Moscow for the rest of the country and the world that doesn't exist.

After all, in Moscow, even the election commission admitted, Putin did not earn a majority.

But on Monday night the world will get a glimpse of the other Moscow, the real Moscow, which rejects Vladimir Putin. How many Kremlin opponents show up for the 7 p.m. counter-demonstration on Pushkin Square will influence the events of the coming weeks and months. Police behavior will also be critical, hinging on whether they stick to their agreements and if the nationalists go ahead with plans to march to the central electoral commission -- a plan which the police and the special units brought into Moscow would likely answer with violence.

Sunday night's atmosphere was reminiscent of the summer of 1996 when Boris Yeltsin was proclaimed president for the second time. Everyone knew then that he managed it only with dirty tricks during a time when public sentiment had already long been turned against him.

Sure, the comparison is somewhat misleading. Some 35 percent of Russians voted for Yeltsin, while nearly 64 percent backed Putin, a completely different majority. Subtracting the assumed eight, nine or even ten percent of fake votes, it remains a significant victory -- as long as the big cities are left out. The Russian electorate is simply "the best in the world," the head of the electoral commission said after the results were published.

And yet the mood is still similar to that of 1996. Anyone with political sensibility knows that Putin lacks political vision. He even admitted it on Sunday when he described himself as a pragmatic politician. With that statement, he keeps all options open. He could release a prisoner like oil magnate Mikhail Khodorkovsky when it is politically convenient, while simultaneously tightening the thumb screws elsewhere. But that will not be enough for Russia over the next few years. Yeltsin also lacked a clear sense of direction for his country, sidestepping urgent reforms. As a result, Russia failed to get on its feet economically and a crisis brought the country to the brink of bankruptcy. Yeltsin had to go before the end of his second term.

To win votes one last time despite the deterioriating atmosphere, Yeltsin played to fears that the communists would return. Putin, meanwhile, cleared a majority by arguing that foreign-backed "political provocateurs" want to take power in Russia, in fact a reference to Moscow's rebellious middle class.

He repeated his stance at last night's victory rally, claiming that these people have only one goal: "to destroy the Russian statehood." This is nonsense, it is demagoguery. But it means that Putin still isn't ready to talk to his opponents. In a western country, a candidate celebrating his triumph would have made at least some formal effort to reach out to the opposition.

What will the opposition do now? They cannot, of course, change the popular mood. There will be no revolution, no insurrection against the new-former Kremlin chief. Instead, there are just two possibilities:

But there simply aren't any other options. 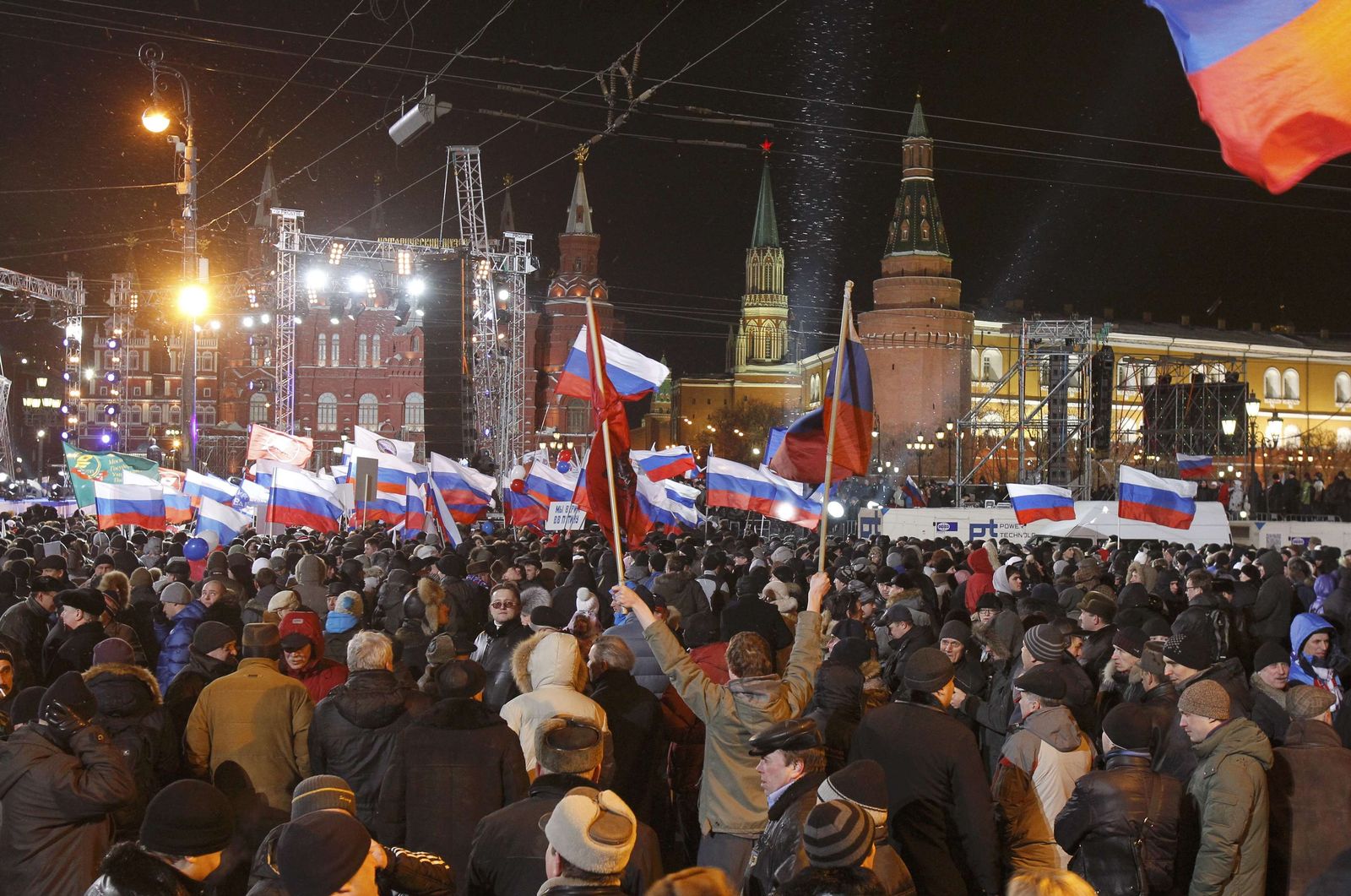 Crowds bussed in from the countryside reportedly gathered near the Kremlin on Sunday to support Vladimir Putin.