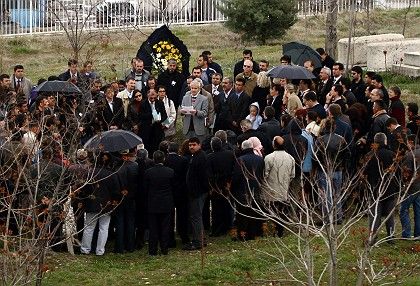 Family members and friends of Tilman Geske gather at an Armenian cemetery for his funeral in Malatya on Friday April 20.

Tilman Geske, 46, had a dream when he moved to Turkey. As a practicing Christian, he wanted to live in peace among Muslims in a country that was a cradle of early Christianity. The German immigrant gave language instruction, established a consulting firm and translated Christian literature. "He was a likeable man," says a Turkish accountant who worked in the office next to Geske's. "Whenever I asked him how he was doing, he responded in traditional Turkish: 'Cok seker -- very sweet.'"

His sweet dream came to an abrupt end last Wednesday, when five Turkish fanatics armed with bread knives stormed into the office of the Christian Zirve publishing house in the south-eastern city of Malatya, tied up Geske and two other employees, before torturing them and finally killing them by slitting their throats. One of the victims was stabbed 150 times in a particularly brutal attack. A note left at the scene read: "This should serve as a lesson to the enemies of our religion. We did it for our country."

But the attack undoubtedly did their country more harm than good. The damage the murders have caused could hardly be more devastating. The "missionary massacre," as Turkey's papers have called the unusually brutal crime, has plunged Turkey into new turmoil. It has also shone an uncomfortable spotlight on the question of whether the country will succeed in its bid to join the European Union.

For critics of Turkey, including some in German Chancellor Angela Merkel's conservative Christian Democratic Union (CDU) party, the incident merely confirms their warnings that the country simply doesn't belong to Europe. Italian Prime Minister Romano Prodi said the crime "certainly does not help" the country's bid for EU membership.

Merkel, who currently holds the EU's rotating presidency, said Sunday that she expected Turkey to take action to show it was tolerant of Christianity after the murders. "This episode has no influence on the accession negotiations, which will continue with the result open. But the episode is a cause for concern," she told the Münchner Merkur newspaper in an interview for its Monday edition. "Everything must be done to inhibit a climate that makes such appalling deaths possible," she told the paper. "I expect clear action from the government in Ankara (to show) that intolerance of Christianity and other religions has no chance."

Optimists, on the other hand, hope the murder was merely a provocation by opponents of democracy intent on steering Turkey away from its westward course. "Just as one cannot claim, in the wake of the killings in Virginia, that all Americans are serial killers, it would be wrong to hold the entire country responsible for this crime," warns sociologist Dogu Ergil.

Nevertheless, there is no longer any doubt that Turkey has run into serious difficulties as far as the development of its civil society is concerned. The murder of the Turkish Protestants exposes a deep-seated problem: Turkey is at a standstill -- or even regressing -- when it comes to key issues like tolerance and pluralism.

"In Germany, Turks residing there have opened up more than 3,000 mosques. If in our country we cannot abide even by a few churches, or a handful of missionaries, where is our civilization?" wrote Ertugrul Özkök, editor-in-chief of leading secular Turkish daily Hürriyet, in a hard-hitting editorial on the murders. "Where is our humanity, our freedom of belief, our beautiful religion?" he asks.

An Unholy Alliance of Left and Right 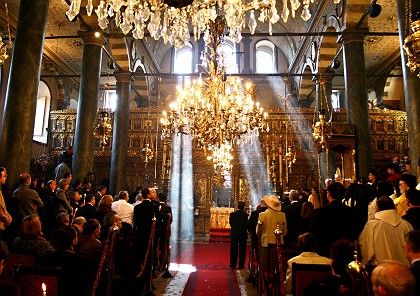 Orthodox worshippers attend a morning mass at the Patriarchal Cathedral of St. George in Istanbul.

The danger does not come -- as one might expect -- from the usual fundamentalist Muslims. Instead, it is an unholy alliance of nationalists ranging from the left to the Islamic right that is inciting hatred against free thinkers and those of other faiths. According to Ergil, there is a "mixture of fanatical nationalism and militant religious fervor" that prepared the ground for the Malatya massacre -- and that also appears to have been behind the murders of Turkish-Armenian journalist Hrant Dink and Roman Catholic priest Andrea Santoro last year. Experts like Ergil see the murders as part of an unsettling new trend, in which fanatical nationalist-religious groups see violence as a "cleansing force" and themselves as supposed "saviors of the nation" -- like the 19- and 20-year-old attackers in Malatya, who were students and all lived in the same conservative Islamic dormitory.

The hate speech comes from both the left and the right. Rahsan Ecevit, the widow of popular former Prime Minister Bülent Ecevit and a supposed leftist, routinely launches into tirades against foreigners who buy land in Turkey. She claims that those who encourage citizens to convert to another religion want to divide Turkey.

Christianity is gaining ground in Turkey, especially in the southeast, the chairman of the far-right nationalist Great Union Party (BBP) recently warned, even going so far as to accuse Christian missionaries of being "supported by the CIA." The bolder such conspiracy theories are, the more popular they seem to be.

And yet, all nationalist sentiment aside, Turks were shocked by the brutal murders, which the government of Prime Minister Recep Tayyip Erdogan was quick to condemn. Erdogan wants to bring Turkey into the European fold. But to do so, says Joost Lagendijk, a Dutch member of the European parliament for the GreenLeft party who is himself married to a Turkish woman, it must "actively appeal to its citizens to accept people of other religions and ethnic origins."

In some cases state institutions even help to promote the hostile mood. As far back as 2001, the country's National Security Council, under then Prime Minister Ecevit, classified "missionary activities" as a threat to national security. The government office of religion has in the past distributed sample sermons targeted against missionaries. In addition, Erdogan's government, which is dominated by his right-wing Justice and Development Party (AKP), undermines its credibility when, for example, an official like Minister of State Mehmet Aydin claims that missionary activities are not "an innocent declaration of religious beliefs, but rather a planned movement with political goals."

With politicians stirring up public anger, some segments of the population seem all too willing to fall in line. The more aggressive forms of Christianity, such as that espoused by free evangelical churches, are especially suspect to many Turks.

Even the friendly Muslim who worked in the office next door to Tilman Geske became skeptical when he heard that the German was "proselytizing." To ease his doubts, he took a look around Geske's office to see if there were Bibles lying around, but he found nothing. "This terrible murder brings shame upon us," says the horrified accountant, who prefers to remain anonymous. And yet, he says, he is not pleased about some of the things he hears, such as the rumor that missionaries "place money in the Bibles that they hand out in front of our schools."

For the beleaguered Christians, it is sometimes better not to be noticed at all. There was no sign on the door of the Zirve publishing company's office in Malatya -- a deliveryman was attacked there two years ago and nationalists later staged angry protests in front of the building.

'We Are Experiencing a Witch Hunt' 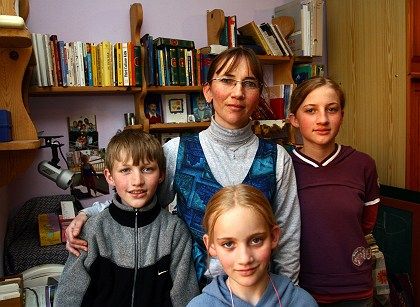 Tilmann Geske's wife Susanne, shown here with the couple's three children, says she will pray for her husband's killers.

"We are experiencing a witch hunt straight out of the Middle Ages, and the Malatya victims were certainly not the last," complains Ihsan Özbek, the chairman of the Salvation Church, a union of Protestant groups which claims to have 5,000 members throughout Turkey. "We are portrayed as traitors and potential criminals," he says. Tensions are so high that Özbek warns that it has become very dangerous to be called a missionary. "That would be the equivalent of a death sentence these days," he says.

Christians are reporting efforts to file lawsuits against supposed missionaries, even though proselytizing is not officially against the law in Turkey. In fact, the opposite is true. It is against the law in Turkey -- theoretically, at least -- to prevent anyone from practicing or disseminating his faith. But creative approaches are sometimes taken to prosecuting unpopular infidels, says attorney Orhan Cengiz. In Silivri, a town west of Istanbul, two converts are currently on trial for the uniquely Turkish offense of "insulting Turkishness" and for "incitement of religious hatred," both considered crimes under the notorious Article 301 of the country's penal code.

Necati Aydin, a local pastor and one of the publishing company employees murdered in the Malatya killings, had already been arrested once before for distributing Bibles and religious pamphlets. "Villagers claimed that Aydin and his colleagues had insulted Islam," says his attorney. They were charged with distributing "propaganda against religious freedom."

One of the most difficult positions is that of Turkish converts who turn their backs on the "true faith." Sociologist Behnan Konutgan, 54, converted to Christianity while still a student. "While all my fellow students were constantly reading the Koran, I had a Bible sent to me," he recalls. "I read the New Testament with excitement." Konutgan now works as a pastor and is translating the Bible. "Society is our problem, not the laws," he says, describing his own experiences. "The church is perceived as an enemy."

The murdered Christians were members of Malatya's small Protestant community, which included a few foreigners like Tilman Geske and 15 Turks who have converted from Islam to Christianity. The liberal newspaper Radikal estimates that there are about 10,000 converts in Turkey, expressing surprise that they could be seen as a "threat" in a country of 73 million people, 99 percent of whom are Muslim.

But it seems that this is exactly the case. According to an opinion poll, 59 percent of Turks favor taking legal action against missionaries, and more than 40 percent said they would not want Christian Armenians or Greeks as neighbors.

Tilman Geske was buried last Friday in his adopted Turkish home of Malatya. In an interview on Turkish television, his wife Susanne said that he was a "martyr for Jesus" and that she would pray for forgiveness for his killers.

Ugur Yüksel, one of the two Turkish Christian employees murdered with Geske, had already been interred. Unlike Geske, though, he had been given a Muslim burial, admitted a spokesman from the local Protestant community: "His family insisted on it."