The Burmese dissident had actually only intended to call to let SPIEGEL ONLINE know he was still alive, but his phone call sounded more like a cry of outrage.

He had spent hours dialing the telephone just to get a connection outside the country. If Burma's ruling military junta discovered his call, they might have charged him with "subversive contact with foreigners" and punished him with a long prison sentence and torture.

"It looks like the end of the world here," he shouted into the telephone when he finally got a call through to Singapore on Tuesday morning and could tell SPIEGEL ONLINE about the situation in Rangoon after Cyclone Nargis wreaked havoc on the city. "Everything is destroyed, we have no drinking water and nothing to eat. Tens of thousands must be dead. Hundreds of thousands are homeless."

And what is the government doing in response?

"They're clearing the streets in the rich neighborhoods," the dissident said. Then the line went dead.

Longer eyewitness reports from the devastated country are hard to find: The telephone lines are cut off. Only occasionally can residents of the benighted country -- ruled for 46 years by a crude military dictatorship that prefers to call its nation Myanmar -- make calls abroad. The few TV images and photographs available from this country of 50 million come from the strongly-censored Burmese state television or from tourists who managed to flee the disaster area in the last few days.

But what has come through sounds worrying enough. Burma, already the poorest country in Southeast Asia, shows all the signs of total collapse. It's been four days since the killer cyclone ripped across the Irrawaddy delta in Burma's south and devastated the city of Rangoon -- home to 6 million people -- before cutting a swathe through the jungle on the Thai border.

But the government of General Than Shwe, 75, doesn't appear to have the situation in hand or be able to coordinate disaster relief. The military isn't even in a position to give a rough overview of the true scope of the catastrophe.

While a regime spokesman was insisting on Monday evening that the number of fatalities was 4,000, Foreign Minister Nyan Win was simultaneously telling foreign diplomats that at least 10,000 were dead. However these were only in the city of Bogala, he said. The town lies in the area most affected by the storm, the Irrawaddy River delta area.

It was there on Friday night that Cyclone Nargis made landfall on the Burmese mainland with a speed of 220 kilometers per hour (137 miles per hour). Whole villages were completely wiped out. According to the first eyewitness reports, a three-metre-high flood wave hit the coast in the wake of the storm.

"Reports are coming out of the delta coast, particularly the Irrawaddy region, that in some villages up to 95 percent of houses have been destroyed," said Mathew Cochrane from the International Red Cross. The junta was forced to admit on Tuesday morning that at least 15,000 people were feared dead. And the death toll just keeps rising -- later on Tuesday, state media reported that 22,464 people had been confirmed dead. A further 41,000 people are reported to be missing. 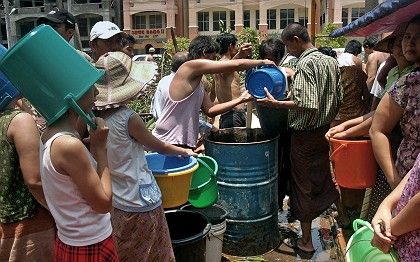 However even the latest death toll figure is probably still too low, given that most of Burma's delta region hit by the fateful storm is less than three meters above sea level. Most people there had no way to escape. The region affected by the storm has a population of just under 24 million people. Many of them are now likely to have no roof over their heads. In addition, their wells are polluted and a large part of the rice harvest has suffered serious damage.

It is already clear that the weekend's cyclone in Burma was the worst storm that has ravaged Asia since a cyclone killed tens of thousands in India in 1999. It is also the most devastating natural disaster since the tsunami of December 2004 laid waste to large parts of coastal regions in South and Southeast Asia. Then, more than 230,000 people died in Thailand, Indonesia, South Asia and Africa.

Once again, many deaths could have been prevented in Burma if the government had warned its people about the impending disaster. But nothing of the kind happened. "The only thing that was broadcast over the radio on Friday was the propaganda for the bogus referendum next Saturday," said Aung Zaw, editor of the Thailand-based opposition magazine Irrawaddy. Burma's military wants to use the May 10 referendum to secure its power after the elections promised for 2010.

As a result, the civilian population in the affected areas was completely unprepared when Nargis hit the south coast of Burma around midnight on Friday. Many of the coastal inhabitants support themselves by fishing and so a large number of boats must have been at sea at that point. It is still not clear what happened to those boats.

But, instead of taking quick and straightforward action to help its suffering population, the junta continues to only think about its political situation and how to stay in power. When monks took to Rangoon's streets last September to demand democracy for their country, it only took a few hours before soldiers were deployed. The troops opened fire on demonstrators and threw thousands of protestors into prisons.

But with the current crisis, there has so far been little sign of the security forces. Up until now, the authorities have concentrated on clearing streets in the city's few upmarket residential areas and in front of important government offices. But in the slums on the outskirts of the city, where people have been without drinking water, food or shelter for days, the officers and their henchmen have yet to show their faces.

At noon on Tuesday, it was still unclear whether the Than Shwe government would allow unhindered access to the country. Foreign Minister Nyan Win said: "We welcome help, as our people are in a difficult situation."

Nevertheless, up until Monday there was still talk of aid workers having to follow certain conditions if they brought medication, rice and tents from Thailand into the devastated areas. In the generals' eyes, foreign aid organizations are a potential source of unrest and civil disobedience.

However, it is slowly dawning on the government how little time there is left for such power games. With several hundred thousand homeless -- with no access to drinking water and food -- it is only a matter of time before epidemics break out among the victims, and children in particular are struck down by diarrhea and dysentery.

"Eat fresh fruit, use clean toilets and dispose of your rubbish," government radio has been warning people in the disaster zones since Tuesday morning. "Also look out for mosquitoes and snakes."

Whether this can be seen as a first admission of failure and incompetence on the part of the junta is doubtful. Nevertheless, the United Nations announced on Tuesday the first progress in their talks with the stubborn generals in Burma. Paul Risley, spokesman for the UN World Food Program in Bangkok, said the organization had received what he described as a "careful green light" from the junta. "The government indicated willingness to accept international assistance through the UN agencies," he said, adding that "the UN will begin preparing assistance now to be delivered and transported to Myanmar as quickly as possible."

However the first humanitarian aid will probably come from Burma's neighbor Thailand. A Thai Air Force C-130 military transport should arrive at Rangoon's devastated airport on Tuesday afternoon with a cargo of medicine and food.

Burma is happy to accept help from its neighbor because Rangoon's generals do not need to fear Bangkok's politicians. Only last week, the Thai Prime Minister Samak Sundaravej said that he had no problems with the Burma junta keeping the opposition leader Aung San Suu Kyi under house arrest, even after the referendum.