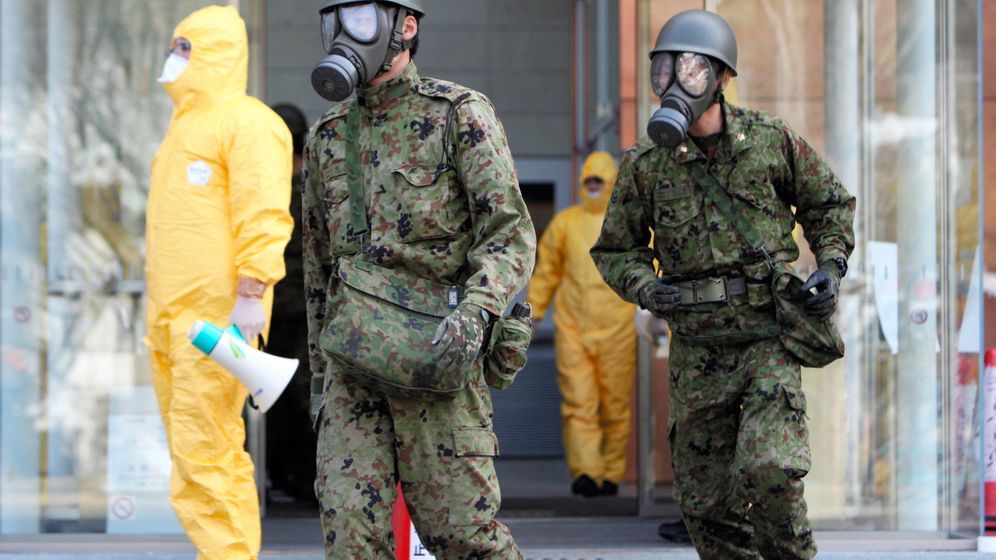 Japan scrambled on Sunday to stop a meltdown at two nuclear reactors damaged by Friday's earthquake as Prime Minister Naoto Kan said the country was suffering its worst crisis since World War II and police warned that the death toll from the quake and tsunami in the northeastern Miyagi Prefecture alone could exceed 10,000.

"The current situation of the earthquake, tsunami and the nuclear plants is in a way the most severe crisis in the past 65 years since World War II," Kan said in a televised address. "Whether we Japanese can overcome this crisis depends on each of us. I strongly believe that we can get over this great earthquake and tsunami by joining together."

The country was hit by further powerful aftershocks on Sunday.

Tokyo Electric Power (TEPCO) said on Sunday it would start rationing electricity from Monday with rolling blackouts of about three hours in parts of Tokyo and other Japanese cities. The cuts are intended to offset a severe shortage created after nuclear plants were left inoperable.

Millions of people remained without electricity in the crisis-hit region of northeastern Japan and authorities stepped up relief efforts as the scale of the tragedy became clearer on Sunday. About 310,000 people have been evacuated to emergency shelters, many of them without power, Japanese broadcaster NHK reported.

Officials earlier announced that the number of troops helping with rescue work in the affected northeast region would be doubled to 100,000. 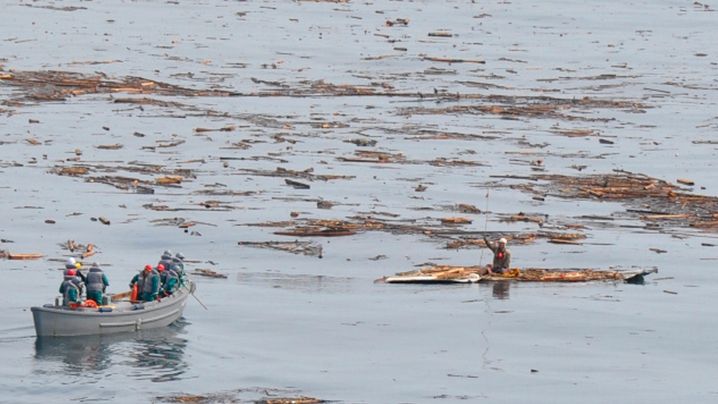 Engineers were battling on Sunday to stop fuel rods in the damaged reactors at the Fukushima Daiichi plant from overheating. The government said a building housing a second reactor was at risk of exploding after a blast blew the roof off the first the day before at the complex, 240 kilometers (150 miles) north of Tokyo.

The fear is that if the fuel rods do not cool, they could melt the container that houses the core, or even explode, releasing radioactive material into the wind.

Almost 2 million households were without power in the freezing north, Japanese media said. There were about 1.4 million without running water.

Authorities have set up a 20-kilometer (12-mile) exclusion zone around the Fukushima Daiichi plant and a 10 km (6 miles) zone around another nuclear facility close by. Around 140,000 people have been moved from the area, while authorities prepared to distribute iodine to protect people from radioactive exposure.

In Japan, Chief Cabinet Secretary Yukio Edano said there might have been a partial meltdown of the fuel rods at the No. 1 reactor at Fukushima. Engineers were pumping in seawater, trying to prevent the same from happening at the No. 3 reactor.

"Unlike the No. 1 reactor, we ventilated and injected water at an early stage," Edano told a news briefing. Technicians don't know at present how much water surrounds the fuel rods in the No. 3 reactor. Only one thing is certain: the pressure is rising, and with it the possibility of another explosion.

Experts said the use of salt water would cause lasting damage to the 40-year-old reactors. Ten technicians from German were engaged in maintenance work at the Fukushima plant during the earthquake on Friday. The reactor they were working on had been turned off for the repairs. None of them were in the plant at the time of Saturday's explosion in No 1 reactor.

There are 10 nuclear reactors along the coast at Fukushima, and five of them are experiencing cooling problems.

Asked if fuel rods were partially melting in the No. 1 reactor, Edano said: "There is that possibility. We cannot confirm this because it is in the reactor. But we are dealing with it under that assumption."

He said fuel rods may have partially deformed at the No. 3 reactor but a meltdown was unlikely to have occurred.

"The use of seawater means they have run out of options," said David Lochbaum, director of the Union of Concerned Scientists Nuclear Safety Project, according to Reuters.

Radiation Levels Up, 'No Immediate Threat'

A Japanese official said there were 190 people within a 10-kilometer radius of the nuclear plant when radiation levels rose and 22 people have been confirmed to have suffered contamination. Workers in protective clothing were scanning people arriving at evacuation centers for radioactive exposure.

TEPCO said radiation levels around the Fukushima Daiichi plant had risen above the safety limit but that it did not mean an "immediate threat" to human health.

Edano said there was a risk of an explosion at the building housing the No. 3 reactor, but that it was unlikely to affect the reactor core container.

The nuclear accident, the worst since the Chernobyl disaster in 1986, has triggered heavy criticism that authorities were badly prepared for an earthquake of this scale, and for the threat it could pose to the country's nuclear power industry.

The nuclear problems have also revived the debate about the future of nuclear power in Germany, where the government last year decided to extend the lifetimes of the country's reactors, which had been scheduled to be shut down by 2020.

Chancellor Angela Merkel, facing a string of regional elections in coming months and aware of the strength of German public opposition to nuclear power, ordered a review of the safety of German nuclear plants.

If a nuclear accident on such a scale could happen in a highly devopled nation such as Japan, "Germany can't simply go back to normal," Merkel said on Saturday.

Along the northeastern coast of Japan, thousands spent another freezing night huddled in blankets over heaters in emergency shelters. The region was devastated after the quake sent a 10-meter (33-foot) wave surging through towns and cities in the Miyagi region, including its main coastal city of Sendai.

The government has been criticized for its handling of the disaster. "Crisis management is incoherent," said a headline in the Asahi newspaper which commented that instructions to expand the evacuation area around the troubled plant had been too slow.

The government met on Sunday to discuss introducing an extra budget to help cover the cost of recovery.

The earthquake was the fifth most powerful to hit the world in the past century. It surpassed the Great Kanto quake of Sept. 1, 1923, which had a magnitude of 7.9 and killed more than 140,000 people in the Tokyo area.

The 1995 Kobe quake in Japan killed 6,000 and caused $100 billion in damage, the most expensive natural disaster in history. Economic damage from the 2004 Indian Ocean tsunami was estimated at about $10 billion.

There was ghostly calm on the streets of Tokyo on Sunday. Many stores were closed and taxis sped along streets usually clogged with traffic. People are extremely nervous and don't trust government assurances that radioactivity levels remain manageable.

There were long queues in the few grocery stores that were open, and supplies are running out. "It's enough to make you despair," said Osamu Yamamori, 80. "Meat is sold out everywhere and I only managed to get a few vegetables."

The people of Yamamori's generation have grim memories of the American atomic bombs on Hiroshima and Nagasaki.