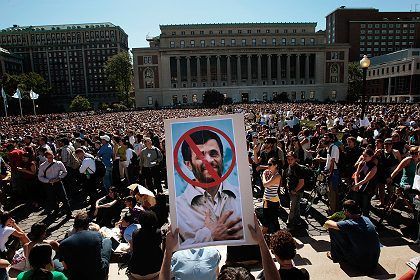 Lee Bollinger is regarded as an expert on the United States constitutional right to freedom of speech. The lawyer and current president of New York's Columbia University has written several books on the topic, including one entitled "The Tolerant Society," in which he wrote that no country defends free speech as much as the US -- even when that speech is "extremist." This raises the question: Just how far can it go?

Bollinger himself proved how far on Monday: He invited Iranian President Mahmoud Ahmadinejad to speak at the university. In doing so, he was asking for trouble, including demonstrations and demands for his resignation.

Wrongly, as it happens: Before Ahmadinejad could give his usual florid and inflammatory speech, he was welcomed by Bollinger. "Mr. President," he thundered in his address as Ahmadinejad, wearing his usual beige sports jacket, sat smiling stiffly on the stage of the auditorium, "you exhibit all the signs of a petty and cruel dictator."

A murmur swept through the hall. Ahmadinejad frowned, but Bollinger was not finished yet. He lashed out at the "regime" for its "persecution" of women and homosexuals, the "inflammatory speeches" against Israel, the support for terrorism and the desire for nuclear power. "You are either brazenly provocative or astonishingly uneducated." He didnt leave out anything, including Ahmadinejad's "absurd" denial of the Holocaust: "This makes you, quite simply, ridiculous," Bollinger blasted into the microphone. Then he turned the podium over to his guest.

Ahmadinejad could hardly have expected things to turn out this way. He apparently was hoping for a similar PR coup to last year's opening session of the United Nations General Assembly, when he gave gracious press conferences in New York and was firmly but politely heckled by the renowned think tank, the Council on Foreign Relations.

This time, the New Yorkers are not giving him an opportunity to make any crude speeches. Ahmadinejad experienced this when he arrived. "Evil has landed," read the headlines in the Daily News, which called him "Hitler" for short. The New York Post gave him the title "Guest of Dishonor." Only New York magazine was a bit more relaxed about the visit: "Ahmadinemania!"

There was trouble even before Ahmadinejad's three-day trip to New York, where his visa limits his movements to within a 40-kilometer radius around the UN building. The president had expressed his wish to visit Ground Zero -- but police chief Ray Kelly prohibited the visit, on the grounds of "public safety."

Local politicians announced that they intended to boycott the university speech. The most prominent was Mayor Michael Bloomberg: "I dont care about what he says." Ahmadinejad's declaration in an interview with CBS before he arrived that he was a peace lover didnt help much.

The Iranian leader sought consolation with like-minded compatriots in New York. On Sunday evening, Ahmadinejad met with Iranian exiles hand-picked by the embassy. The event, which took place at the New York Hilton, was closed to the news media. According to the participants, he again denied any desire for nuclear weapons: "Why should we have a bomb? It doesn't help us."

'The US Government Tries to Manage the World'

Then, on early Monday afternoon, he spoke with members of the National Press Club in Washington -- from a safe distance, by videoconference. Again there was little that was new: the usual questions and the usual non-answers. And these attacks from the Iranian leader: "We oppose the way the US government tries to manage the world. We believe it's wrong. We believe it leads to war, discrimination and bloodshed."

Even German Interior Minister Wolfgang Schäuble was asked about the topic when he visited Washington. After a speech at the German Marshall Fund, he was asked what he personally thought of Ahmadinejad. "If he asked me, I would tell him that I don't like him," Schäuble answered. Otherwise I would ignore him.

But many New Yorkers appeared to feel that ignoring the firebrand was the wrong approach. Hundreds of demonstrators had already gathered early on Monday morning in front of the Columbia campus in Morningside Heights in northern Manhattan. The main gate on Broadway became a kind of "Speakers' Corner" for opponents and supporters of Ahmadinejad -- and of Bollinger. Under the windows of the Journalism School, where the Pulitzer prizes are awarded every year, the two sides attacked each other loudly: those who wanted to let Ahmadinejad talk and those who would prefer to send him back to Iran as soon as possible.

"He is a hate preacher!" shouted Jewish pensioner Albert Marshak. "But I want to be allowed to hear what he says," Columbia graduate Jacob Sabat roared back. Paula Press marched with a New York Post front cover reading: "Go to Hell!" New York State Assemblyman Dov Hikind demanded that Ahmadinejad be "arrested when he comes to Columbia University, not invited to speak."

Protests -- from both sides -- continued on the campus, which was blocked off by police. Students had covered the paths and walls with posters showing quotes from Ahmadinejad's hate speeches and photos of executions. Some had wrapped themselves in Iranian flags; others were wearing Israeli flags.

Hundreds squatted on the library lawn in front of a screen on which the speech was to be broadcast -- the 600 seats in the hall had been sold out within an hour. Let Iran decide for itself! shouted the 21-year-old Iranian film student Fatemeh Farshneshani, holding a poster reading: No War on Iran.

Although Bollinger had already announced that he was going to be tough with Ahmadinejad, nobody had expected the host to give such a reprimand to his guest -- including the guest himself, who had waved benevolently to the audience before sitting down. Wow, someone said when the university president finished his speech.

Ahmadinejad looked irritated. "I want to complain a bit (about) the person who read this political statement against me," he said, giving an ice-cold smile and pointing his index finger into the air. Bollinger's words were "an insult to information and the knowledge of the audience here" and included "insults and claims that were incorrect," he said, but added that he would not let himself be affected by the "unfriendly treatment."

He went on to lose himself in a lecture on God, science and politics, sprinkled with reproaches, accusations and suggestions. After the speech, Bollinger admitted that he didn't totally know what Ahmadinejad had wanted to say. Ahmadinejad skirted around the question of Holocaust denial, but said there was not "sufficient research that can approach the topic from different perspectives." (At this point, the audience almost drowned out the voice of the interpreter.) Again he insisted on Iran's right to peaceful nuclear energy.

During the following question and answer session, the students were even tougher on Ahmadinejad than the journalists had been earlier -- although the Iranian leader still didn't answer any of their questions. Asked about the executions of homosexuals, he said with a straight face: In Iran, we don't have homosexuals like in your country. Laughter and booing echoed around the hall.

Bollinger said afterwards that he did not believe Ahmadinejad had really answered the questions. But that's not what it was about -- after all, in the end it all came down to the principle of freedom of speech. Bollinger quoted the former US Supreme Court Justice Oliver Wendell Holmes, who described free speech as an experiment, as all life is an experiment.

Ahmadinejad will speak before the UN General Assembly on Tuesday -- without an unfriendly greeting and without impudent questions. His speech was deliberately scheduled for the afternoon, six hours after US President George W. Bush is due to speak. That way, there's little chance of the two leaders running into each other.