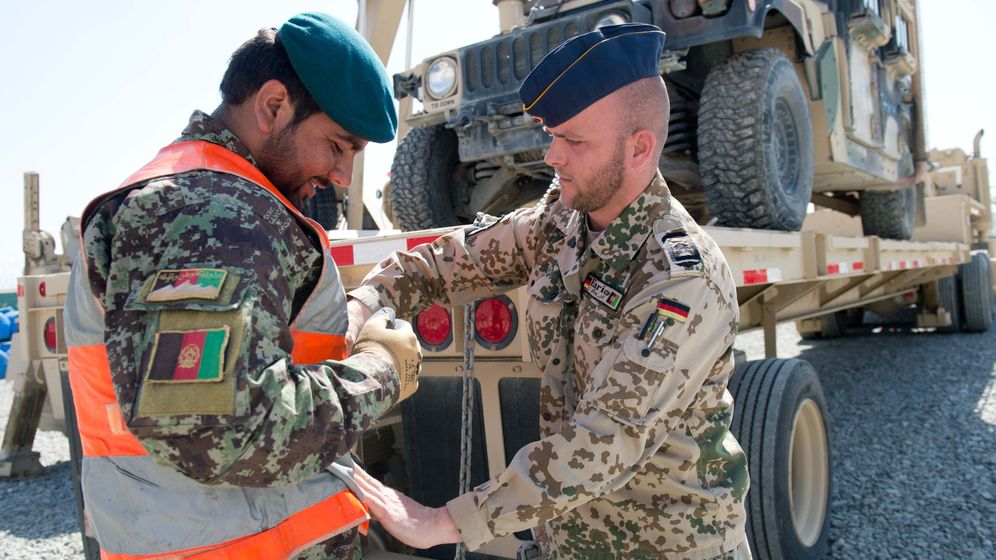 The F-16 fighter-bombers thundered toward Afghanistan's Baghlan Province, hurrying to respond to a request for emergency backup. Special forces belonging to the Bundeswehr, Germany's armed forces, had run into trouble during a joint operation with Afghan security forces in the district of Baghlani Jadid.

This was a Saturday two weeks ago and the Afghan security forces were engaged in heavy fighting with the Taliban. The situation was threatening to get out of control. When the Dutch fighter jets reached the area, they immediately dropped two bombs.

The end result was two Afghan soldiers and five insurgents dead, as well as several injured. The mission was only over after two days.

If the Bundeswehr had had its way, the skirmish would have been kept secret. The army offered no information about the incident. It didn't even mention the bombing incident in last Friday's confidential "briefing of parliament."

The Bundeswehr is eager to avoid any more bad news. Less than one and a half years before its scheduled end, the multinational mission in Afghanistan is in danger of failing both politically and militarily. Despite the steadily worsening security situation in the country, Western nations have failed to reach an agreement with President Hamid Karzai on a further presence of security forces beyond the end of 2014. There's a risk of a complete withdrawal.

Fear of US 'Zero Option'

After more than 10 years of war and over 3,300 dead soldiers among the allied forces, the mission hangs in the balance. The precipitous withdrawal of the US from Vietnam serves as a clear example of what the International Security Assistance Force (ISAF) should not do. In the worst-case scenario, the same could happen in Afghanistan, with the Bundewehr right in the thick of it.

Without the agreed-upon follow-up mission "Resolute Support," this fragile country would be abandoned to its fate. It would be uncertain whether aid organizations could remain in Afghanstan. The legitimation of the entire mission would be thrown into doubt: It would mean giving up the stability and societal progress achieved here so far. Berlin's often-repeated statement that "We won't abandon Afghanistan" would be exposed as an empty promise.

Berlin has watched on with mounting concern as US President Barack Obama has threatened Afghan President Karzai with the "zero option" -- a complete withdrawal of US forces from the Hindu Kush by 2015. A complete American withdrawal would scupper all plans for a stable Afghanistan and would require the Bundeswehr, too, to fundamentally revise its planning.

This April, German Defense Minister Thomas de Maizière announced the possibility of up to 800 Bundeswehr soldiers remaining in Afghanistan beyond the end of 2014, as part of an international training mission. But that would be impossible without US participation. "If the Americans withdraw, no German involvement will be possible," says Omid Nouripour, the Green Party's defense policy specialist. The "zero option" requires "closer consideration," believes fellow Green Party politician and Bundestag defense committee member Katja Keul.

Meanwhile, the security situation in the country is continung to deteriorate. Instead of the stabilization it had hoped for, ISAF's Kabul headquarters now receives almost daily reports of dead and wounded soldiers. The casualty numbers declined in 2012 but have risen sharply since the beginning of this year.

"The security situation in some of the known problematic regions in the north has worsened appreciably since the beginning of the spring offensive," reads a July 11 internal diplomatic cable from the German consulate in Mazar-e-Sharif. Last Monday it emerged that the Taliban has killed 2,748 police officers just in the past four months.

The events of May 11 illustrated just how dangerous the situation has become for civilian development workers as well. Mohammad Hafiz, 35, was woken by the sound of gunfire in the middle of the night. He and his colleagues, employees of a Kabul-based road construction company, were staying in a camp in the village of Shakh Moghlan in northern Afghanistan. Now they feared for their lives.

"The Taliban, around 20 of them, attacked the camp from all sides. They fired rockets and we were lucky to escape," the engineer recalls.

When Afghan police arrived hours later, all that was left to do was to count the dead -- two engineers and one laborer. The Afghan construction company, which had been hired by the German Society for International Cooperation (GIZ) to pave a 24-kilometer (15-mile) stretch of road, reacted immediately by pulling out of the project. Following the death of his employees, the company's owner found the German project simply too dangerous.

Such attacks in the north of the country, where German troops operate, are causing considerable concern. In the consulate cable, the German diplomats warn that by beginning its withdrawal from the region, the Bundeswehr has created a security vacuum, allowing the Taliban to advance.

The Taliban's attacks target the Afghan National Security Forces (ANSF), which for six weeks now have been officially responsible for protecting the people here. "Against the background of the transition process agreement, the number of attacks on ANSF forces and civilians has seen a sharp increase," the diplomatic cable from Mazar-e-Sharif reads. The Taliban feels "freer" in the provinces where the international troops have withdrawn, the cable continues, particularly as nighttime raids are rarely carried out there anymore.

This has serious consequences for development projects, the diplomats warn. They fear even the legitimation of the Afghanistan mission itself is at stake and that it will no longer be possible to credibly convey the mission's "core message" -- that Germany will remain involved in long-term civilian development aid "regardless of the conclusion of ISAF."

Germany's Defense Ministry, too, is starting to sense that the Afghanistan mission, already unpopular among Germans, is in danger of becoming a PR disaster with its constant stream of bad news.

In response, the Defense Ministry's strategists have adopted a new communications strategy -- ignore all bad news and banish any data that show an increasing number of attacks to the realm of statistical imprecision. The logic here is that, now that the Bundeswehr itself only rarely carries out missions, it is dependent on statistics from its Afghan partners, which aren't necessarily reliable. The new policy is to redefine the security situation in ways that no longer rely exclusively on the available statistics. Anything that doesn't fit is made to fit.

The prevailing mood in Berlin is one of uncertainty. The heart of the problem is that it isn't clear whether American soldiers will remain in Afghanistan beyond 2014, and if so, how many. Without a reliable number, it is impossible for NATO's headquarters to make reasonable plans for the continuing mission.

Initially, Washington planned for around 10,000 of its soldiers to remain in Afghanistan. But Afghan President Karzai refuses to agree to a bilateral security agreement, something the US has made a condition of its continuing military presence. Nor have the international partners officially been invited to remain in the country beyond 2014. These allies, especially Germany, are pushing for the follow-up mission to receive the UN Security Council's blessing, but Karzai is resisting a UN mandate, which he sees as limiting Afghan sovereignty.

The general outline of the agreement with the US has been in place for quite a while, but in recent months Karzai has repeatedly brought additional requirements to the table. When it came to discussing an assurance of immunity for American soldiers in Afghanistan -- a key requirement from the American side -- the Afghan president suddenly expressed a desire for the treaty to include a security guarantee for his country in the case of attacks from outside. Those close to him say that before he will sign the treaty, Karzai also wants to know the exact size of the American contingent that would remain after the completion of the NATO mission. The US, though, is unwilling to make such a pronouncement.

Cost of Development Work to Rise

This state of uncertainty has considerable consequences for the urgently needed international development work being done in the country. Up to now, German development aid workers, of whom there are currently around 110 in northern Afghanistan, have been able to rely on the Bundeswehr or other ISAF forces for security. In an emergency, they could request evacuation by helicopter or seek treatment at military medical centers, and retreat to German military bases if conditions got dangerous. But by the end of this year, all German bases aside from the main camp in Mazar-e-Sharif will be closed.

Military withdrawal will drive up the costs of development work in the region. The GIZ anticipates additional expenses of nearly €5 million ($6.6 million) in the period following withdrawal, for civilian plane tickets, medical services, secure accommodation for employees in so-called "safe houses" and armored vehicles for overland travel.

In an analysis conducted on behalf of Germany's Development Ministry under Minister Dirk Niebel of the Free Democratic Party (FDP), the GIZ's security experts made clear just how extensively development workers rely on the soldiers' presence. Continuing to operate Germany's many projects in the region, according to the GIZ's Risk Management Office, would urgently require that such projects "still be able to rely on the support of the Bundeswehr" or other armed forces.

The report further urges that a new mandate on Afghanistan should include a written guarantee of emergency assistance, guaranteeing both rapid evacuation by air and armed assistance when under fire, which could only be accomplished by "robust ground forces." In cases of kidnapping, the report continues, "special capabilities" would be imperative -- a reference to the Bundeswehr's elite Kommando Spezialkräfte (KSK).

All this sounds very different from the German government's planned scenario of a pure training mission for the soldiers who remain stationed in the country.

But without the necessary security guarantees, things look dire for most of the GIZ's projects in Afghanistan. Without those assurances, according to the analysis, the only option would be to accept that the projects would have "reduced operational capabilities," since it would be possible to remain active only in Mazar-e-Sharif.

President Karzai, meanwhile, has found his own form of diplomacy with his disliked partners in Washington. The US government was more than a little surprised to receive a payment request from Kabul's Finance Ministry stating that the US must pay a $1,000 fine for every transport container of military equipment removed from the country unless that container has properly filled out documentation. These costs could amount to as much as $70 million.

To lend weight to his words, Karzai turned to extortion tactics, instructing his customs officers at the border with Pakistan to close crossings there to all American transports for six days in mid-July.