It took more than 24 hours. But finally on Wednesday, Brazilian military pilots searching for missing Air France flight 447 found evidence appearing to confirm the worst. The debris included an airplane seat, a life jacket and a fuel slick in the Atlantic Ocean some 650 kilometers (410 miles) north of the Brazilian island Fernando de Noronha and along the jet's flight path. 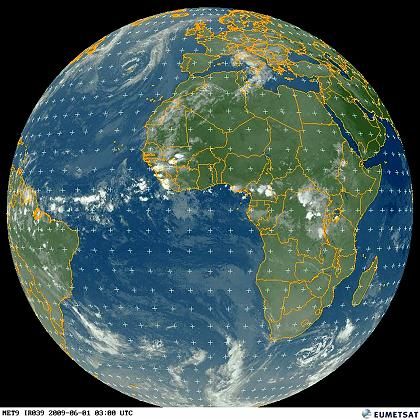 A satellite image showing a band of storms off the coast of Brazil at the time when the Air France flight would have been passing through the area.

Air France spokesman Jorge Amaral said that searchers found the flotsam in two separate sites some 60 kilometers apart. "The locations where the objects were found are towards the right of the point where the last signal of the plane was emitted," Amaral said. "That suggests that it might have tried to make a turn, maybe to return to Fernando de Noronha, but that is just a hypothesis."

Investigators won't know for sure what happened to the Airbus A330-200 unless they are able to locate the two black boxes carried by all civilian flights, one to record cockpit communication and the other for flight data. There was no indication from the pilot as to what might have caused the crash. The black boxes, though, could be on the ocean floor deep under the surface of the Atlantic.

On Tuesday, people in Brazil and in Europe were coming to terms with the loss of their families and friends. A total of 228 people were on the flight from 32 countries, including 61 French citizens, 58 from Brazil and 26 from Germany, five of whom were from the same Stuttgart family. Ten sales representatives with their spouses from the French electrical supply firm CGED were on board as were three senior executives from Michelin. An actress from Stuttgart was on board as was a member of an Irish Riverdance troupe.

The French parliament held a moment of silence on Tuesday to honor the victims with Air France announcing that a church service would be held in the Notre Dame cathedral in Paris on Wednesday afternoon. German Chancellor Angela Merkel said on Tuesday, "I am, as are all Germans, dismayed."

The flight from Rio de Janeiro to Paris had been scheduled to land at Charles de Gaulle airport at 11:10 a.m. on Monday. But once it left Brazilian airspace, nothing more was heard from the flight aside from an automatic signal sent by the plane indicating an electrical problem after it passed through an area of heavy turbulence. Experts say that it is unlikely that a single lightning strike would have been enough to bring down the jet.

Rescuers are continuing the search in the Atlantic between Brazil and West Africa. Brazilian ships are not likely to reach the area where the debris was spotted before Wednesday.