The place where everything began and, if the Yemeni government has its way, where everything will also end is near the city's new mosque on Street Number 60 in the Hadda neighborhood of San'a, the capital of Yemen. The city's high-security prison, with its clay brown-colored walls and white trim, looks like a modern, albeit heavily guarded gingerbread house.

Anyone who approaches the prison faces the suspicious gaze of soldiers, who record the license-plate numbers of any vehicle they see more than once. The country's security forces have been nervous since Christmas Day, when Umar Farouk Abdulmutallab, a Nigerian who was trained in Yemen, tried to blow up a US airliner as it approached Detroit.

On Feb. 3, 2006, 23 members of al-Qaida escaped from this building, probably with the help of guards. The outbreak marked the birth of the second generation of al-Qaida in Yemen. It also led to a resurgence of the Arabian Peninsula's role as a training ground for militant Islamists. Until then, the Yemeni branch of al-Qaida appeared to have been defeated. A US drone killed its last leader in 2002, and his successor was arrested in 2003. 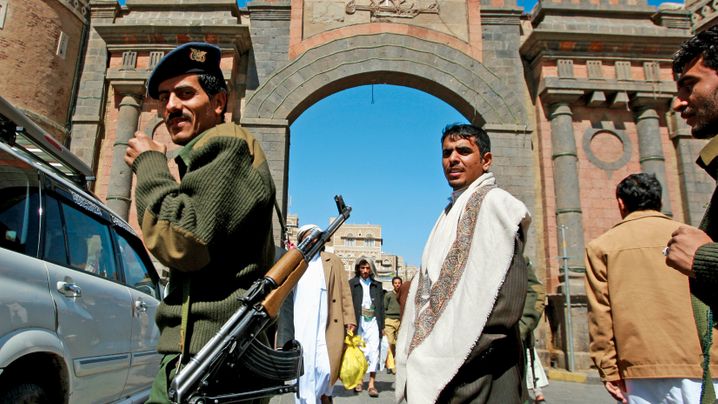 Since the 2006 prison break, though, al-Qaida leader Osama bin Laden's militants in Yemen have attacked embassies, bombed oil production facilities and murdered tourists. They also trained and dispatched the 23-year-old Nigerian with explosives in his underwear, aiming to prove, with a spectacular attack, that no one in the West was safe from them.

San'a Is Awash With Rumors

The ensuing power struggle that has erupted in Yemen pits the terrorists against the Yemeni state. The terrorists have already boasted of further plans to launch attacks, while the state -- officially, at least -- intends to eliminate the terrorists and, together with American security forces, already launched two air strikes against presumed al-Qaida camps last month.

San'a is now awash with rumors. Last Thursday, for instance, some said that a 16-year-old al-Qaida recruit with explosives strapped to his body was on the loose in the port city of Aden. According to another rumor, security forces are missing several trucks filled with explosives and weapons. And, finally, it is said that an al-Qaida leader who was allegedly killed by security forces recently may not be dead, after all.

After ignoring it for years, the world is suddenly turning a worried eye to this unstable country on the Gulf of Aden, arid and lacking natural resources, poorly governed, overpopulated and plagued by insurgents in the north and the south.

And the problems in neighboring countries can be added to the mix. In Somalia, the Islamist Al-Shahaab militias that control large swathes of the country are calling for the imposition of Sharia law and are seeking an alliance with the Yemen-based al-Qaida in the Arabian Peninsula (AQAP). To Yemen's north lies the kingdom of Saudi Arabia, the world's most important oil producer, home of al-Qaida's most generous financial backers and, at the same time, one of the terrorist organization's targets.

"The instability in Yemen is a threat to regional stability and even global stability," US Secretary of State Hillary Clinton said last week. President Barack Obama agreed and put a stop to the planned release of 40 Yemenis being held in Guantanamo. The detainees, which the US government had already classified as not being a threat, had been scheduled to return to Yemen soon.

British Prime Minister Gordon Brown has proposed holding an international conference on Yemen, and United Nations Secretary-General Ban Ki-moon supports the idea. The world has paid no attention to Yemen for decades, but now all of that has changed.

The Yemenis, for their part, claim that they can make do without international assistance. The security forces are "able to confront challenges and eradicate all terrorist groups and refer those outlaw elements to face justice," Deputy Prime Minister Rashid al-Alimi said late last week. But hardly anyone believes that the terrorists will find themselves back in the main prison in San'a any time soon.

'The Smart, Influential Face of Al-Qaida'

The jihadists have already demonstrated their ability to stage attacks. And they have the support of a man who could transform the local branch of al-Qaida into a veritable dangerous enemy of the West: Anwar al-Awlaki, the son of Yemeni parents, born April 21, 1971 in the US state of New Mexico. The conservative US television network Fox News has already declared al-Awlaki to be a top threat. According to Evan Kohlmann, a New York-based independent terrorism consultant, Awlaki is "the smart, intellectual face of al-Qaida, and he is now a central figure in the movement."

Awlaki spent the first six years of his life in the United States, where he experienced a very American childhood complete "with hamburgers and Christmas trees," says a close relative. His parents returned to Yemen in 1977. But the young Muslim eventually went back to the United States, where he attended George Washington University in Washington, DC. He became a student imam at 23, which entitled him to free tuition.

Soon afterwards, he became an imam at the Ribat Mosque in San Diego, California. It was during this period, sometime in 2000, that he met Khalid al-Mihdhar and Nawaf al-Hazmi, two of the 19 hijackers who carried out the Sept. 11 attacks a year later. According to the official 9/11 investigation report, the two men had accepted Awlaki as a religious role model and maintained a close relationship with the imam.

Although Awlaki is not particularly well versed in theology, he is intelligent, speaks fluent English and is familiar with the culture of the "infidels." He knows how his students can carry out militant Islam in the Western world, and he is the perfect translator.

This is also the way he sees himself. "The only ones who go to the trouble and spend money to translate jihad literature into English are the Western intelligence agencies," he wrote on his Web site in January 2009. "Too bad they don't want to share these translations with us."

Awlaki can help them with that. He has published a manual on the Internet that includes "44 methods to support jihad." The imam has had a Facebook fan community for years, and his sermons are available on DVD and on the Web.

In a speech to Muslim students in London in 2003, he spoke of the "rebirth of a great nation" and the return to a pure Islam based on the example set by the Prophet Muhammad. His audience is believed to have included the London backpack bombers, who killed 52 people and injured 700 in several attacks on the London Underground and a double-decker bus on July 7, 2005. Books and recordings of his sermons were found during searches related to the London bombers.

British terrorist Mohammed Hamid, who planned a second London Underground attack, was one of Awlaki's followers, the Daily Telegraph reported on Friday. That attack, however, failed when the detonators but not the bombs exploded.

A Member of One of Yemen's Most Important Tribes

Awlaki was in contact via e-mail with US military psychiatrist Nidal Hasan, who shot and killed 13 people on the Fort Hood military base in Texas in November. A few weeks ago, he met Abdulmutallab, the would-be Detroit bomber, in Yemen's Shabwa Province. There was "no doubt," Deputy Prime Minister Alimi said last Thursday, that the Nigerian "was in contact with al-Qaida elements, including Anwar al-Awlaki."

But who is this mystery man, of whom only a few photographs exist? A new Osama bin Laden? Or just a fast talker with good English skills?

Anyone who studies Awlaki and his background can quickly gain insights into Yemen's most serious problems, including its corrupt government apparatus, the state's relative lack of resources and the never-ending rivalry among its tribes.

The Awlaki clan is one of the most important in the country. Awlaki's father Nassir was agriculture minister under current President Ali Abdullah Saleh, who has ruled Yemen like a patriarch for the last 31 years. In addition to studying in America Anwar, the son, attended the Iman University in San'a -- notorious in the West -- founded by Islamist Abdulmajid al-Zindani, who is known as "the red sheikh." Al-Zindani fought in Afghanistan with Bin Laden in the 1980s and is also a confidant of the president. The graduates of his school give radical sermons in Nigeria and Somali, but also in Malaysia. The influential red sheikh is never absent from official events in Yemen.

The Afghanistan veteran has yet to utter a word about his former student. Yet Awlaki was not only a student at al-Zindani's university, he also taught there and, together with his mentor, ran a dubious charity for several years. The United States added the sheikh to its list of "global terrorists" in 2004.

President Saleh is apparently anxious not to allow the radical scholar hinder his efforts to present a unified front in the fight against terrorism. To ensure this, he is said to have barred his old friend from speaking in public.

But negotiations are already underway behind the scenes. The president himself is believed to have made an offer to terrorist recruiter Awlaki through middlemen a few days ago, proposing a "very Yemeni solution" under which the imam could expect mild treatment if he openly distanced himself from al-Qaida.

Awlaki is currently assumed to be hiding somewhere in Shabwa Province, at a location known only to his most trusted followers, and in a region where his tribe has considerable influence.

Members of Awlaki's family insist that the accusations against him are a conspiracy concocted by the media and the enemies of Islam. One of his closest relatives told SPIEGEL that Awlaki's teachings have reached many non-Muslims, and that he has exerted a great deal of influence as a "missionary," precisely because he has been able to preach his message in English. The relative said that Awlaki was a conscientious student and is an enthusiastic champion of Islam today, but that he is not an extremist and is not in contact with terrorists.

But Awlaki's own statements contradict such efforts to paint him as a moderate. In December 2008, he openly promoted solidarity with the Islamist Al-Shahab militias in Somalia, saying: "Their success depends on your support. It is the responsibility of all of the faithful to help them with money and personnel."

In January 2009, Awlaki called upon all Muslims to remain physically fit and to prepare themselves for combat by undergoing weapons training. In November, he declared Nidal Hasan, the now-paraplegic Fort Hood killer, a Muslim hero. In early December, Yemeni journalist Abd al-Ilah Shai met with Awlaki in a remote village that he was told not to identify. He was greeted with open arms, says the journalist. Awlaki, Shai reports, seemed to be in poor health. "He kept taking deep breaths. He wasn't gasping for breath, but it was noticeable."

Shai says that Awlaki told him that he had known Hasan, the Ft. Hood attacker, from his days as an imam at the Dar-al-Hijrah Mosque in Virginia. Awlaki said he even believed that he had played a part in Hasan becoming a devout Muslim eight years ago, because the man had simply "trusted" him.

When international leaders attend the London conference initiated by Prime Minister Brown later this month, they will discuss ways to prevent Yemen from becoming a "failed state." In this context, the governments of the West will also have to address the question of whether to treat President Saleh, their ally in the fight against terrorism, as part of the problem or part of the solution. And perhaps Awlaki will have decided by then whether to accept the president's offer or to continue on his current path, as a translator of jihad. 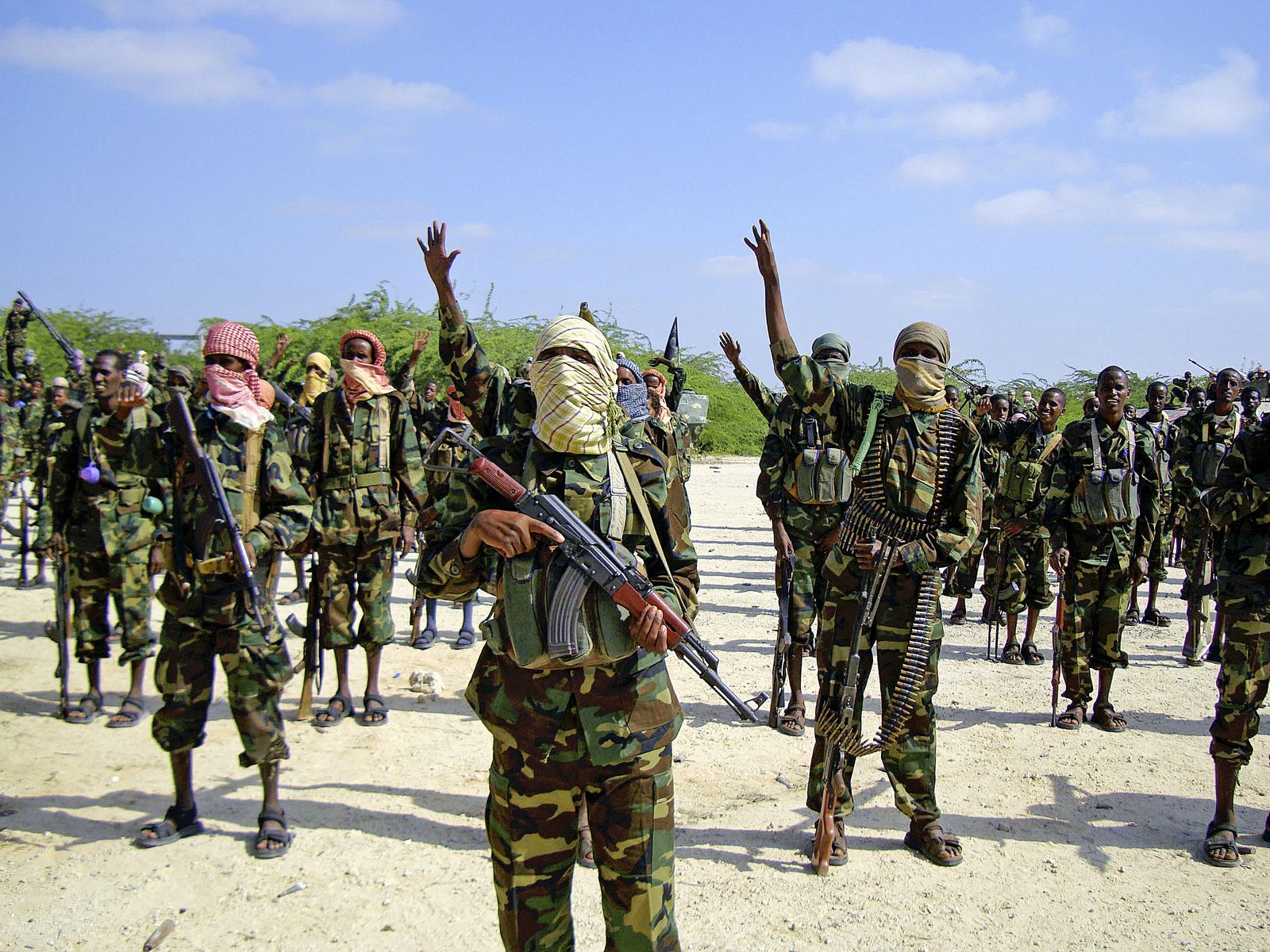 Problems in neighboring countries are also adding to the instablity. Here fighters with the Al-Shabab movement in Somalia stand to attention during military exercises.