They're cheap, easy to buy anywhere in the world and, apparently, are the hallmark of a terrorist: a digital Casio wristwatch -- strictly speaking, the black F-91W model or its silver variant, the A-159W. The United States military considers this watch to be "an indicator of al-Qaida training in the manufacture of improvised explosive devices (IEDs)" and with it the identifying feature of a potential terrorist.

This information is contained in the secret documents about prisoners at the Guantanamo Bay US military prison camp in Cuba, which have just been released by the whistleblower website WikiLeaks and SPIEGEL, along with other international media. The " Gitmo Files" comprise the records of 765 former and current Guantanamo prisoners. Thousands of pages labeled "secret" and "Noforn" ("Not releasable to foreign nationals") contain detailed information about the prisoners, their life in the military prison, the conduct of intelligence agencies and their treatment of the prisoners.

In one document, titled "Matrix of Threat Indicators for Enemy Combatants" -- a field guide of recognition and classification of "enemy combatants" -- various items are listed to help interrogators assess a prisoner's capabilities and intentions. With the aid of this 17-page catalog, the Joint Task Force responsible for operating the Guantanamo prison camp were expected to determine whether a suspect could be a possible terrorist threat, if he had the opportunity.

In the field guide, special attention is given to the items a suspect had in his possession at the time of his arrest. The Joint Task Force speaks of "suspicious items," including a satellite phone, military radio/transceiver, $100 bills and the Casio F-91W watch.

The mere possession of the watch, which can be purchased for a few dollars and is worn on the wrists of millions worldwide, is the enough to make a man suspect.

The footnotes of the document explain that the Joint Task Force identifies the watch as "the sign of al-Qaida, (which) uses the watch to make bombs." It's known that the Casio would be given to trainees in Afghan terrorist training camps for this purpose, where the young men would be taught how to use the watches in the building of bomb detonators.

In the documents on individual inmates, the possession of the Casio watch would be listed in item 5.b as "property held." Here, too, the wristwatch will be mentioned in the footnotes as a distinguishing feature of al-Qaida.

According to the Guardian newspaper, more than 50 detainee reports indicate the ownership of a Casio watch, of which 32 prisoners wore the black F-91W and an additional 20 prisoners wore the silver A-159W at the time of their arrest.

'The Watch Points to Mecca'

Even in the so-called Combatant Status Review Tribunal, which gives the final decision on whether a prisoner is considered an enemy combatant, the watches were given particular importance, according to transcripts of the military tribunals of Guantanamo prisoners, which were first released in 2006 after the Associated Press successfully sued to make them public.

At that time, the Munich daily Süddeutsche Zeitung published the examination of a prisoner who was questioned extensively about his Casio watch. When the prisoner was told that his watch was used by al-Qaida, he was shocked. According to the newspaper, the prisoner, a Kuwaiti engineer, said, "We have two watches in Kuwait: Fossil and Casio. This watch has a compass that shows the direction of Mecca. I am Muslim and pray five times a day." He said he needed the watch like many people in Kuwait.

The Kuwaiti, who had traveled after Sept. 11, 2001, to Afghanistan with $15,000 in his pocket, said, "I swear I don't know if terrorists use it or if they make explosives with it. If I had known that, I would have thrown it away. I'm not stupid." He added that, "We have four chaplains" at Guantanamo. "All of them wear this watch. I am not Taliban or al-Qaida."

The tribunal asked the Kuwaiti engineer whether he had altered the watch so that it could emit electrical signals. He responded: "If it were altered it would have been stupid to keep it." 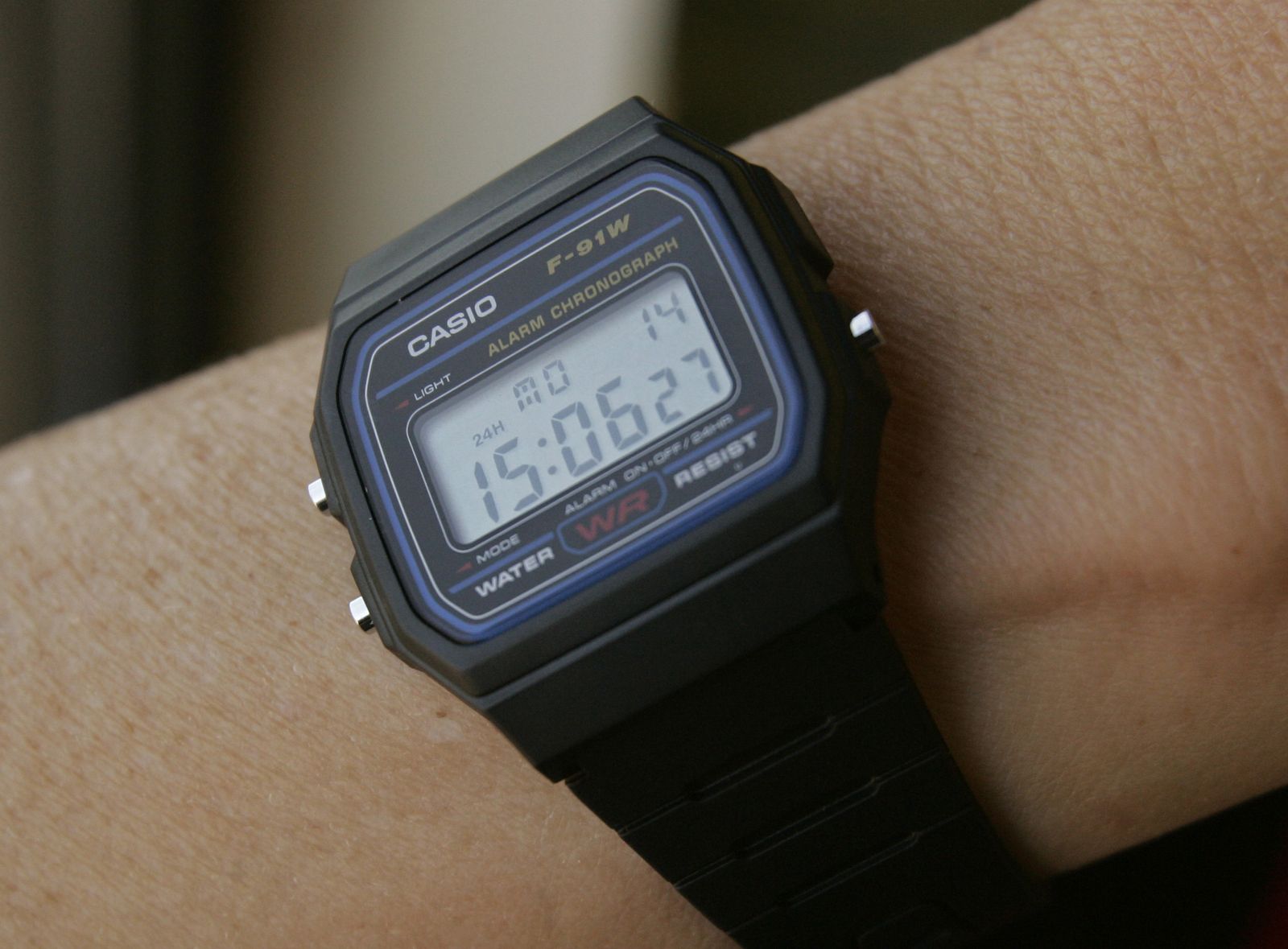 This Casio F91W-1 watch is taken as a sign of a possible terrorist by US intelligence.